Humans, fish, and other animals are consuming microfibres in our food and water

Editor’s note: This report is part two of a three-part series on the emerging threat of microfiber pollution. In part one we explored where microfibers come from and where they are found in the environment. In part three we’ll look at who’s working to solve the problem.

It’s 7:48 pm on January 8, 2018, and rain is quenching San Mateo, California’s parched suburban streets. I park my car and don my waterproof jacket and pants, yank on knee-high plastic rain boots, and trudge over to Carolynn Box, science programs director for the 5 Gyres Institute, and Diana Lin, environmental scientist with the San Francisco Estuary Institute (SFEI).

Standing on a footbridge over San Mateo Creek, we are all wrapped, head to toe, in foul weather gear—all of it plastic in one textile form or another. Box plunges a rigid plastic tube into the swiftly moving creek as Lin turns on a pump. Making a loud wamp-wamp-wamp sound, like a sewing machine, it slurps up a 5-gallon (19-liter) sample of water from the swiftly moving stream.

A passerby inquires what we’re up to. Someone quips, “We’re bottling water to sell it!” Everyone chuckles.

In fact, the creek sampling is part of a two-year research projectin which SFEI and 5 Gyres are analysing microplastics—synthetic fragments 5 millimeters (0.2 inches) or smaller—in water, sediment, fish and wastewater treatment plant effluent released into San Francisco Bay. This includes microfibers—thread-shaped microplastics—shed from synthetic apparel, like the clothes we are all wrapped in. 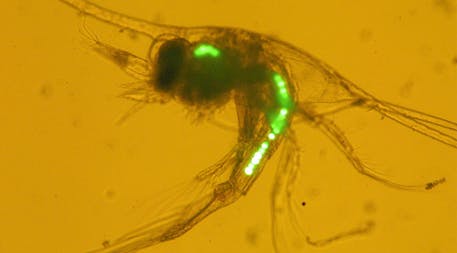 Using fluorescence, researchers have been able to show that plankton that form the base of aquatic food chains readily take up microplastics. Photo courtesy of Matthew Cole, Plymouth Marine Laboratory. Originally published in Environmental Science & Technology

To date, laboratory studies have largely looked at microplastics as a whole rather than specifically at microfibers. However, since microfibers are a primary constituent of microplastics, such research can provide useful insights.

Lab studies have found that microplastics can harm small aquatic organisms that eat them — including plankton, a hugely important food source for aquatic organisms. These harms include decreased ability to feed and reproduce. Zooplankton given food laced with microplastics in a lab had decreased nutrition and poorer health than the control group. And pearl oysters fed polystyrene microbeads had less energy.

Microfiber researcher Chelsea Rochman, assistant professor in the Department of Ecology & Evolutionary Biology at the University of Toronto, and other researchers, including Matthew Cole, a research scientist at Plymouth Marine Laboratory, hypothesize that the physical shape of synthetic fibers might affect organisms. For example, they could increase the likeliness of blockages in the digestive tracts of some organisms that consume them, depending on the fiber’s size and the animal’s size, they say.

A small number of lab studies have sought to analyse how ingesting fibrous microplastics affects aquatic organisms. For a 2015 study, European researchers embedded 1- to 5-millimeter (0.04- to 0.2- inch) microfibers from polypropylene rope in food given to crabs for four weeks. The crabs that were fed the fiber-laced food ate less overall than the control group and had less energy available for growth. After moving through the digestive tracts, the fibers were balled up, so they did not seem to cause physical blockages.

Cole also has shown that copepods—crustaceans that are found in marine and nearly all types of freshwater and serve as a key food source for small fish—readily ingest the fibers.

There is concern about impacts due to chemicals that attach themselves to microfibers, too. Rochman fed fish microplastic pellets that had absorbed toxins via prolonged exposure to seawater near San Diego. The fish accumulated the chemicals—which included polycyclic aromatic hydrocarbons (PAHs), polychlorinated biphenyls (PCBs), and polybrominated diphenyl ethers (PBDEs), all known carcinogens—and suffered liver toxicity and other pathological changes.

Advocacy groups such as 5 Gyres pointed to Rochman’s study, and to concern that microplastics, including microfibers, could cause large-scale harm by introducing toxins found in waterways (including the legacy industrial contaminants PCB and DDT) into the food chain, to successfully lobby for a US ban on the sale of soaps and cosmetics with added plastic microbeads. (Canada and the United Kingdom have followed suit.)

Thus far, however, scientists cannot say whether microfibers from textiles harm nonhuman animals in different or more severe ways than other types of microplastics. But some suspect so. Since many synthetic garments are treated with synthetic dyes, waterproofing or antimicrobial agents, and because clothing accumulates flame retardants and sends them into wastewater, scientists are especially interested in studying microfibers shed from apparel as a source of toxic chemicals.

“It’s understood that [microfibers] may have unique effects because of their shape and maybe the cocktail of chemicals associated with them—like all of the dyes and sometimes flame retardants or waterproof chemicals [applied to textiles],” says Rochman.

Humans consume microfibers via bottled and tap water, salt, beer, and seafood, according to a growing list of studies.

A 2018 study found microfibers in the vast majority of sea salt, beer, and tap water samples tested. © 2018 Kosuth et al, from PLoS ONE, licensed under CC BY 4.0.

In a study published in April, student Mary Kosuth and associate professor Elizabeth Wattenberg from the University of Minnesota and Sherri Mason, a chemistry professor at the State University of New York at Fredonia, analyzed 159 samples of tap water from 14 countries, 12 brands of beer brewed with Laurentian Great Lakes water, and 12 brands of commercial sea salt. Eighty-one percent of the tap water samples contained human-generated debris, as did all of the beer and salt samples. Nearly all of the debris was composed of microfibers, most likely synthetic.

Earlier this year Orb Media published a study of bottled water led by Mason. Microplastics were found in all but 17 of the 259 bottles of water analyzed. Fibers were the second most common type of particle found. Polypropylene, which is the type if plastic used in bottle caps, was the most common type found. Nylon accounted for 16 percent of the fibers and polyester made up 6 percent.

In response to this study, the World Health Organization is launching a review of its own to explore the potential risks of plastics in drinking water. A WHO spokesperson told The Guardian that the organization is planning to assess existing evidence, identify areas where more research is needed and make plans to address them.

There is also concern that humans may be exposed to microfibers through what we eat. In a 2015 study published in Nature, Rochman reported that microfibers were found in the intestines of market fish and shellfish. Since people consume the guts of shellfish, they are likely consuming microplastics when they do.

Recently, researchers from Shiraz University in Iran foundmicroplastics — most of them microfibers — embedded in the tissues of four species of fish (shrimp scad, orange-spotted grouper, pickhandle barracuda and bartail flathead) caught in the Persian Gulf. The researchers recommended caution in consuming such fish.

We also might be coming into contact with microfibers through the air we breathe. Think, for example, of tiny fibers that might be getting past filters in clothes dryers, or those sent airborne when you shake out a blanket or sheet.

Several years ago Rachid Dris led a study as a graduate student at Université Paris-Est that involved collecting atmospheric fallout on rooftops in two locations, one urban and the other, suburban. Nearly all the material collected was fibrous, and a third of the fibrous materials were synthetic. In a second study, Dris, now a researcher at the University of Bayreuth, compared the fallout at three indoor sites with that of an outdoor site and found far more airborne fibers indoor. A bit more than a third of the indoor fibers were synthetic.

Dris and colleagues have also studied potential human health impacts from breathing microfibers. Their research found that how likely a fiber is to be inhaled (brought into the nose or mouth and deposited into the upper airway) or respired (brought into the lung) depends on size and shape—but that inhaled fibers can settle in the lung and can cause inflammation.

Fibers bigger than 5 microns in diameter are not likely to enter the lung, according to the paper. The fibers in the fallout studies Dris performed were between 7 and 15 microns—however, only fibers 50 microns long and up were analyzed (smaller ones could not be analyzed) so shorter fibers may have smaller diameters.

The researchers looked to studies of textile workers dating back to the mid-1970s and late ’90s. These show that synthetic microfibers have been found in lung biopsies, and biopsies of the lungs of textile plant workers have shown lesions whose suspected causes, based on animal studies, were acrylic, polyester or nylon dust. Some of these past studies have shown higher respiratory inflammation linked to prolonged exposure to airborne fibers (a similar pattern of biological response to asbestos exposure). Yet others have found that pulmonary fibrosis and cancer can follow extended periods of inflammation.

Dris and colleagues note that airborne fibers, like those found in water, could be manufactured or coated with harmful chemicals. And they call for more research both on the human health impacts of microfibers and on whether and how consumers are inhaling microfibers through sources such as household dust.

In a nutshell, we know very little about the impacts of microfibers on the health of nonhuman animals and people. But what we do know suggests a need for additional research.

Indeed, researchers are working to find out more about actual animal and human impacts. And at the same time, efforts are underway among advocacy groups, researchers and apparel brands aimed at everything from understanding how and which apparel sheds fibers, to preventing fibers from entering wastewater, to potentially altering how textiles are made to reduce shedding. In part three of this series we’ll look at who’s working on this and how.

This story was written by Mary Catherine O’Conner and published with permission from Ensia.com