The emirate says the world's largest mall will be built as a smart city following environmentally-friendly guidelines, but experts and observers voice concerns on the ambitious nature of the project.

In a bid to attract tourists all-year round and bring the world to its doorsteps, investment group Dubai Holding has unveiled the world’s first climate-controlled city allowing visitors to walk in comfort even during the peak of summer in the Arab Gulf region.

The United Arab Emirates’s vice president and Dubai’s ruler, Sheikh Mohammad bin Rashid Al Maktoum, a major shareholder of the Dubai-based conglomerate, announced earlier this month that the new shopping and hospitality destination called ‘Mall of the World’ will be covered in a glass dome during the summer, which can be retracted during the winter months.

Occupying a total area of 48 million square feet, the ambitious architectural feat will be located along the emirate’s major thoroughfare, Sheikh Zayed Road. It will be built following green and environmentally-friendly guidelines of the ‘Smart Dubai’ model, Dubai Holding’s chief executive officer Ahmad Bin Byat claimed in a statement.

Dubai’s smart city model is an initiative that promotes smart technologies to integrate various services, from healthcare to business and government transactions, and smart energy initiatives such as smart grids to smart metering. It is aimed at reducing the country’s high consumption of energy and water.

It will be built using state-of-the-art technology to reduce energy consumption and carbon footprint, ensuring high levels of environmental sustainability and operational efficiency

The press statement did not mention any specific commitment to green building standards. But Bin Byat noted: “It will be built using state-of-the-art technology to reduce energy consumption and carbon footprint, ensuring high levels of environmental sustainability and operational efficiency.”

The UAE, according to a World Wildlife Fund (WWF) report in 2006, has been ranked with one of the highest per capita ecological footprints in the world due to rapid urbanisation.

WWF-Emirates Wildlife Society has been involved in conservation efforts in the country, centred on the reduction of energy and water consumption, including the building of a sustainable built environment.

In the emirate of Abu Dhabi, the government has built the Masdar City, another cluster city focused on clean energy and technology. In Dubai, the Dubai Sustainable City is a similar initiative featuring a community that touts the use of solar roofs for its electricity, as well as recycling of wastewater. 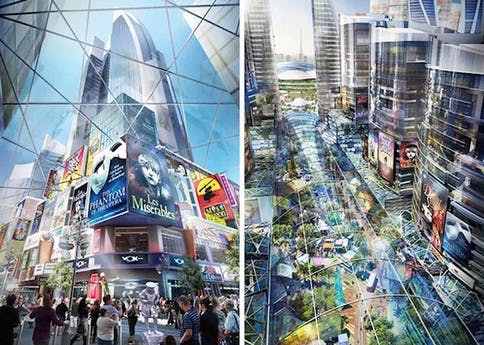 Dubai streets in climate-controlled glass dome aims to make shopping more pedestrian-friendly even during the peak of summer.

Meanwhile, the ‘Mall of the World’ will promote a pedestrian city and feature shopping and indoor recreation facilities such as:

Dubai Holding is also the developer of Dubailand, a US$64 billion leisure district launched in 2003 meant to house over a hundred attractions, including Universal Studios and other iconic theme parks. But some of these projects faced delays or were put on hold due to the crash in the global financial market in 2008. Major developers in Dubai have since been caught up in restructuring its debt payments to investors.

Financial analysts such as Moody’s and the International Monetary Fund have been prompt to issue an early warning to take caution on the ‘exuberance’ happening once again in the emirate’s property market.

Jean-Michel Saliba of the Bank of America-Merrill Lynch was quoted in a report: “We worry about potential policymaking complacency and that such ambitious projects could lead to another boom-bust real estate cycle, particularly as there has not yet been major deleveraging in the economy.”

The project has also attracted mixed reactions online, especially in relation to its sustainability. YouTube users, commenting on the mall’s promotional video for example, such as ‘knightsofskylark’ noted it was “impressive for sure and certainly futuristic”, but others such as Omar Gro said: “Just because they have the money to do it doesn’t mean they should. Imagine the carbon footprint of such construction [and] the amounts of energy wasted trying to cool the desert!”

The firm did not mention the start date of the project, which is said to cost US$6.8 billion to complete and will be one of the highlights of the World Expo in 2020. However, its chairman Mohammed Abdullah Al Gergawi said, “The project will be developed in phases in alignment with the gradual growth of family tourism in Dubai.”