2016 was the deadliest year ever for environmental defenders

A Global Witness report has found that more than 200 people were killed for engaging in peaceful protest against corporate mining, logging, agribusiness and poaching activities last year. The trend is growing.

An average of four people were killed every week in 2016 for protecting their land against mining, logging, and logging interests. Video: Global Witness

At least 200 people were murdered last year for taking peaceful action to protect their lands from mining, logging and agricultural companies, and this trend is on the rise globally, a new report from non-profit organisation Global Witness found on Thursday.

Titled ‘Defenders of the Earth‘, the report showed that the number of murders in 2016 has increased from 185 deaths in 2015, making last year the deadliest year on record. The number of countries where killings took place has also jumped from 16 in 2015 to 24 last year.

About 60 per cent of the murders documented by Global Witness happened in Latin America, with Brazil and Colombia accounting for 86 deaths. The oil and mining industries were linked to the highest number of killings, with logging and agribusiness following closely behind.

The report also found that while it is difficult to identify the exact perpetrators of the murders because they are rarely prosecuted, Global Witness identified paramilitary forces as involved in some 35 cases. Police, landowners, private security guards, poachers, and hired gunmen were among the other perpetrators identified.

The spike in numbers is due to several factors, said Global Witness. Among these are: an intensifying fight for natural resources, which has led to more extractive projects initiated in communities; a crackdown on protest and dissent by some national governments; and political shifts, such as the peace deal between Colombia’s government and FARC guerrilla group.

Ben Leather, campaigner, Global Witness, said in a statement that these reports tell a grim story. “The battle to protect the planet is rapidly intensifying, and the cost can be counted in human lives,” he said.

People around the world are increasingly left with no choice but to take a stand against land theft and environmental destruction, but are brutally silenced by political and business interests, noted Leather, adding that “the investors that bankroll them do nothing”.

He also explained that Global Witness tallied the numbers using online searches and information from its network of local contacts. A death must be verified by credible evidence about the individual’s environmental activism and how they died. However, the organisation’s data is likely to be incomplete because many killings are neither reported nor investigated, he added. 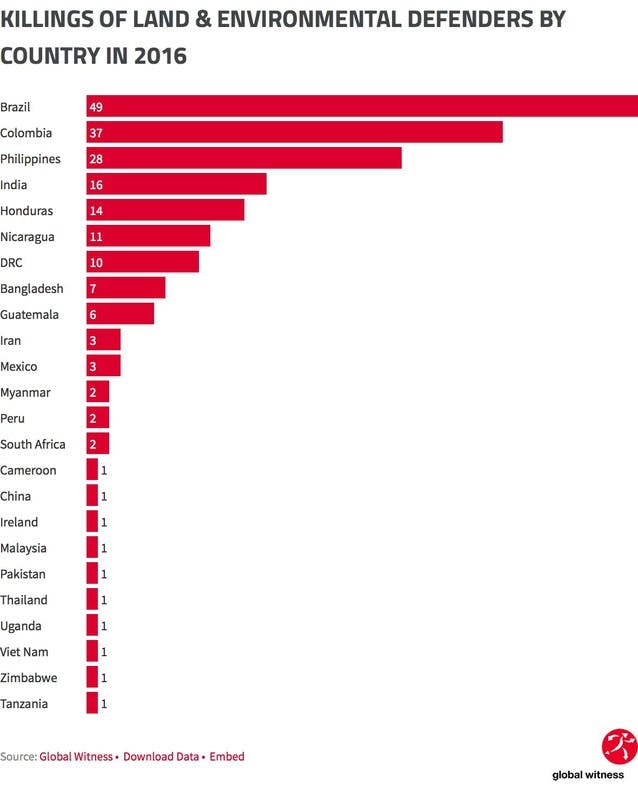 A tally of environmental defender deaths in 2016 by country. Image: Global Witness

As horrific as the murder of environmental defenders is, the killings merely “represent the sharp end of a range of threats” against activists, observed the report. Blackmail, illegal surveillance, sexual and judicial harassment and the use of force in peaceful protests are also strategies used to intimidate and silence these individuals.

For instance, Jakeline Romero, a Colombian women’s rights activist and indigenous Wayuu woman, received death threats via text message after speaking out about against the El Cerrejon mine.

This project, owned by London-listed companies Glencore, BHP Billiton and Anglo-America, is Latin America’s largest open pit mine, and the Wayuu people say that they were not consulted about the mine’s expansion, which has polluted the region’s water resources, and even sought to divert a river that is the community’s main water source.

“They threaten you so you will shut up; I can’t shut up,” Romero said. “We are fighting for our lands, for our water, for our lives.”

Another area of concern for activists is a growing crackdown on dissent and protest, noted the report. In India, for instance, the report documented increasing attacks against communities who oppose commercial mining projects, as well as national infrastructure development initiatives.

Murders in the subcontinent have also “shot up dramatically” from six in 2015 to 16 last year, making India the fourth deadliest country in the world, Global Witness observed. Nearly half of the 16 individuals killed in 2016 died while engaging in public protests and demonstrations.

The battle to protect the planet is rapidly intensifying, and the cost can be counted in human lives.

Tackling the root cause

The root cause of conflict between people—often, indigenous communities—and corporate or state interests is a failure to respect their right to make informed decisions about how their land and resources are used, said Global Witness.

It explained that governments and investors often grab land, forests, and water resources from communities without their consent or prior knowledge. Often, rural villagers are given little to no compensation, and project developers refuse to back down in the face of opposition because they have already invested resources in the project.

In the face of unilateral decision-making about land use and a crackdown on dissent, communities often have no choice but to protest, noted the report.

There is, however, a globally agreed upon process for consulting communities in decisions about development projects. ‘Free, Prior, and Informed Consent’, or FPIC.

In practice, FPIC means that communities are not coerced or intimidated into approving projects, are given sufficient time for decision making, and are given all the information they need in a language they understand. Perhaps most importantly, FPIC requires that a community always has the right to veto a project.

“As well as governments, business also has the responsibility to ensure that FPIC is guaranteed before projects go ahead,” said the report.

Global Witness also noted that investors have a big role to play in putting an end to violence against peaceful activists. Today, however, corporates who commit brutalities against activists are often financially backed by development banks and investors alike.

For instance, the Dutch and Finnish development banks continued to finance the controversial Agua Zarca dam in Honduras even after activists reported several threats and attacks by the corporation behind the project. They only pulled funding when globally renowned activist Berta Caceres was murdered last March, an event that sparked a global outcry.

Rather than turning a blind eye to such abuses in pursuit of economic returns, investors have the power to ensure that community rights are respected for the projects they fund, said Global Witness. At the very least, investors should flag concerns to local authorities, shareholders and clients; condemn the threat publicly, and engage in dialogue with vulnerable individuals to mitigate the threats, said the report.

Global Witness’s Leather added: “States are breaking their own laws and failing their citizens in the worst possible way.”

“Governments, companies and investors have a duty to guarantee that communities are consulted about the projects that affect them, that activists are protected from violence, and that perpetrators are brought to justice,” he said.