[BOOK REVIEW] Through a series of imaginative and well-researched essays, Jonathon Porritt's 'The World We Made' shows how we can achieve a more sustainable, equitable and connected world by 2050 than the one we live in today.

By 2050, it will be a crime to inflict large-scale damage to the environment under international law, the world will use only 4 million barrels of oil a day, down from the 89 million barrels used daily in 2011, and all the fish consumed worldwide will only come from sustainable sources.

Every nation will also have signed up to a binding agreement on greenhouse gas emissions, malaria will have been eradicated, and the world’s population will register at 8.6 billion - 1 billion less than the projected figure by the United Nations Department of Economic and Social Affairs today. 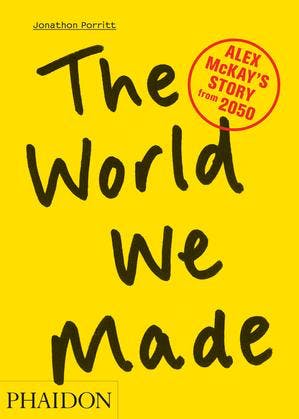 The World We Made book cover. Image: Phaidon

This is the vision set out in The World We Made, a creative non-fiction book by Forum for the Future founder and director, Jonathon Porritt. Published by Phaidon in October 2013, the book is presented as a series of 50 retrospective essays written by fictional history teacher Alex McKay in 2050.

The World We Made outlines key global events, lifestyle changes and technological developments that will bring the “world back from the brink of collapse” to a more sustainable, secure, and equitable state by 2050. It is a multidisciplinary effort that addresses issues as wide-ranging as energy, food and water security, poverty, health, cyber security, and financial markets.

Porritt, who has also served as co-chair of the United Kingdom’s (UK) Green Party and the chairman of the UK Sustainable Development Commission, paints a picture of 2050 that is more optimistic than most scenarios today.

This rosy vision is made credible through Porritt’s deep understanding of the complex issues driving sustainability. Some of the solutions Porritt conjures, such as the development of new biofuels efficient enough to power aircraft, and the signing of a globally binding climate change agreement in 2020 are intuitive and natural progressions from the technology and policies that exist today.

Others, such as the Vatican declaring contraception to be “a matter of private conscience rather than papal direction” in 2018, or the predominance of artificially grown meat in food markets, are more controversial.

We can still move to address today’s converging crises faster than the speed at which those crises threaten to overwhelm us.

Jonathon Porritt, author, The World We Made

The book is also tempered with realism, and acknowledges that despite the plethora of proposed solutions, some crucial targets might not be met. For example, the globally agreed upon target of limiting temperature rise to 2°C will be exceeded, and despite a series of technological, social, and political breakthroughs leading up to 2050, 2045 will still be “the worst year ever from the point of view of climate change.”

Nevertheless, the efforts by policymakers, scientists, communities, and even religious leaders are puzzle pieces that fit together seamlessly to depict a world that is by no means perfect, but far more sustainable and equitable than what it is today.

Despite its overall air of optimism, The World We Made also paints a dire picture of what the world will look like when its current unsustainable trajectory hits rock bottom. For example, the American city of New Orleans will be permanently evacuated due to rising sea levels in 2035 and a global famine will leave 10 million dead in 2025.

Porritt has no qualms about lambasting the idea of constant growth on a finite planet as a “pathetic illusion”, and calls people who will still own personal vehicles in 2050 “crusty old nostalgics”. His frank commentary, combined with the book’s casual, conversational tone, helps make a dense and complex issue accessible to readers.

The book is enriched by a collection of photoshopped images that depict the major transformations that will have taken place by 2050. It helps readers imagine how a slum in Lagos, Nigeria could be retrofitted with solar panels on every roof, or how air travel could be completely overhauled with the invention of “slow travel” air cruisers which look like they belong more to the world of science fiction than to reality.

The World We Made is chock-full of seemingly achievable and effective solutions for a better future. By presenting such a vivid idea of what the world could look like in 2050, the book gives hope that there are steps that individuals, communities and politicians can take to avert the disastrous consequences of climate change, population growth and poor governance.

It is a refreshing and reasoned voice amidst a sea of troubling predictions on the planets future, such as those by the Intergovernmental Panel on Climate Change’s fifth assessment report and the UK Met Office. The book promises hope even as it urges for quick and decisive action.

In a postscript, Porritt cautions that “if we can’t deliver the necessarily limited vision of a better world mapped out in The World We Made, then the harsh truth is that no other vision will be available to us anyway.”