Why traditional knowledge is the key to sustainable agriculture

Substituting organic “bio-inputs” for synthetic agrochemicals is still a one-size-fits-all, technology-focused solution, which means it won’t lead to sustainable agriculture.

The idea that our current agricultural and food system needs adjusting isn’t exactly revolutionary these days. In fact, many scientists and others believe that it could use an entire overhaul.

After decades of technological advances focused on grain production and the development of synthetic inputs, there is finally recognition that the benefits—higher crop yields and increased food supply—also come with side effects. These include widespread soil and water contamination, human displacement from the expansion of large-scale monoculture farm operations, health impacts including diabetes, and heavy reliance on fossil fuels, among others.

Yet it wasn’t until the early 20th century, at the advent of industrialised agriculture, that visionaries such as Eve Balfour and Lord Northbourne began to popularise the term through their work confirming the importance of diversity, ecological knowledge and a strong human/nature connection, as well as the value of small-scale family farming, which, despite the popular misconception that industrial systems are necessary to feed growing populations, continues to produce most of our food with fewer resources and less harmful impacts than the industrial model.

While it’s encouraging to see the latest wave of interest to transform the way we farm and eat—thanks in part to growing awareness of climate change (agriculture currently produces roughly 11 per cent of global greenhouse gas emissions, rising to as high as 29 per cent taking into account the entire food system)—the increasingly simplified version of sustainable agriculture currently being sold to the public and to farmers is concerning.

Specifically, we fear the growing trend of “input substitution”—that is, the mere swapping of chemical products, usually fertilisers and pesticides, for those that are organic and therefore considered less harmful and more “sustainable.”

Don’t get us wrong: We support action that motivates farmers and consumers to make the switch from conventional to organic. Still, it is high time to distinguish what is truly sustainable from what is just another spin on the one-size-fits-all, technology-focused solutions that got us into this mess in the first place. 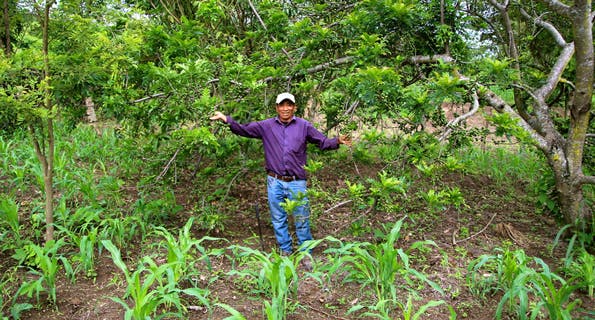 Don Cristobal, a farmer and community leader in Pacux, Guatemala, stands in a diversified parcel with trees and traditional milpa, an ancient polyculture system of corn, beans and squash, along with a host of other native edible plants. Photo courtesy of Nathan Einbinder

Perspectives from the South

For more than a decade we have been documenting the effectiveness of traditional practices by indigenous farmers in Guatemala, while also working on issues related to sustainability and development. As in other areas of Central America, the families we work with confront serious challenges to maintain their heritage as campesinos.

Drought is increasingly frequent and severe; the political economic context is hostile, at best; and the consequences from the violence of the 1980s, when entire villages were razed by the army and paramilitaries in the so-called war against communism, linger on.

It is high time to distinguish what is truly sustainable from what is just another spin on the one-size-fits-all, technology-focused solutions that got us into this mess in the first place.

As a means to improve food security, as well as tackle other issues related to cultural and environmental restoration, many residents have turned (or returned) to agroecology—a set of ancestral and sustainable practices and principles that include the use of heritage crops; seed saving; soil conservation measures, such as reduced or no tillage; and the production of composts from local organic material.

The theory is that through crop diversification, redesign and the ecological use of local resources, families will become more resilient and less dependent on external inputs and aid while simultaneously protecting the environment.

Despite continued skepticism about the potential of agroecology as a viable alternative to the industrial model—particularly by the corporations that are bound to lose if it is taken to scale—a growing body of research shows that it works.

While local interest in agroecology is notably high (the corn-beans-squash milpasystem, developed in the region thousands of years ago and still used today, is considered one of the world’s finest examples of agroecological production) community associations that promote it struggle to compete against national and international programs that gift agrochemicals and hybrid seeds, which, despite bumper harvests in the first year, cannot be re-collected due to their sterility or patents, and are reported to us by local farmers as intolerant to drought.

The logic behind these programs, aside from supporting a multibillion-dollar industry that relies on new customers, is to provide a quick fix to problems related to lack of soil nutrients, as well as to cut labor costs and reduce physical work in general.

While substitution of organic “bio-inputs” minimises—at least as far as we know—environmental harms associated with synthetic agrochemicals, externally produced organic bio-inputs promise once again quick and easy results, with many of the same consequences.

In one noted program, a Guatemalan company has teamed up with USAID to manufacture bio-stimulants, fertilisers composed of microorganisms that improve soil quality. As with previous programs, these inputs are gifted to farmers, and the goal, according to the company, is to turn the country into a so-called “biotechnology hub,” while simultaneously encouraging family producers to shift away from using petroleum-based inputs such as synthetic pesticides and fertilisers—especially in the production of export crops, where overuse has cost companies millions of dollars due to unacceptable residue levels found by importers.

As we previously mentioned, we’re in favor of strategies that reduce farmers’ dependence on synthetic agrochemicals as well as those that promote healthy microbial interactions in the soil—two interconnected elements, among many, that constitute sustainable farming.

So, what makes these inputs so incompatible with truly sustainable agricultural systems?

To begin, as suggested by sustainability expert Jules Pretty, the foundation of any sustainable agricultural system is effective and ingenious use of local resources by local (small-scale family) farmers. For this to occur you need strong social capital, intimate knowledge of local ecology and continuous innovation. Sustainable agriculture relies on the use of local resources by local, small-scale family farmers. Here, a group of small-scale farmers teach sustainable low-impact and indigenous methods to other indigenous farmers in Guatemala. Photo courtesy of Nathan Einbinder

The problems with introducing “bio-inputs” into the communities are displacement of local practices and the risk of creating new forms of dependence.

Just as the introduction of agrochemicals (and the miracle solutions it promised) disrupted local agroecological processes 40 years ago, the organic equivalents continue this cycle, displacing local knowledge of how to maintain soil fertility through careful management of organic material; how to avoid pest outbreaks through intercropping and knowledge of soil types and microclimate; and how to use other interrelated practices that, among the families we work with, involve a deep connection to the land and its stewardship.

If sustainability is the true objective, we need to focus, not on new technological fixes, but on the recovery of local, time-tested agroecological practices. We need to empower those who hold traditional knowledge, support local groups, and introduce new techniques only when easily appropriable and harmonious within surrounding nature and customs.

Only when this happens will we see a shift from the problems that come when external actors, actions and products disrupt farmers’ traditional ways of land stewardship. Only when we once again start valuing agriculture as a system that is part of a larger social system, with all the history and tradition that comes with it, will we see a shift to truly sustainable agriculture.

Nathan Einbinder is a doctoral candidate in agroecology and Helda Morales is thefounder of AMA-AWA, the Alliance of Women in Agroecology. This article was originally published on ensia.com.