The best places to live for eco-friendly expats

Whether you’re craving Asian climates, European culture, a laid-back North American lifestyle or an African adventure, here are a few of the world’s best destinations for eco-friendly expats.

For someone who’s planning on moving their whole life abroad, there’s a lot to think about. You research the cost of living, the job opportunities, perhaps the schooling and childcare options if you’re moving with children – but for the eco-conscious, there are other factors to consider.

Many lists of the best places for expats to live focus solely on leisure activities, a lack of language barriers or a particular thriving industry. But it is possible to tick all of these boxes and still find a new location where green living is high on the agenda.

Whether you’re craving Asian climates, European culture, a laid-back North American lifestyle or an African adventure, here are a few of the world’s best destinations for eco-friendly expats.

According to everyone from Yale University to the United Nations, Singapore is the most environmentally-friendly city in any Asian country.

It’s also been ranked as the best city in the world for expats to live in for three years running, according to HSBC’s Expat Explorer surveys, meaning it’s top of the charts for those who want to settle in a new, ‘green’ location.

Aside from being one of the safest cities on the planet and boasting the best schools, a strong economy and great career opportunities, Singapore is also a big supporter of green initiatives. Known as the Garden City, some of Singapore’s most famous landmarks are the Gardens by the Bay and the Botanic Gardens – the former spanning more than 101 hectares of land in the heart of the city, and the latter being a UNESCO World Heritage site.

Despite a high population density, this city-state’s officials are determined to encourage sustainable lifestyles and infrastructure. Singapore uses an evaluation system called the Green Mark scheme to rate buildings on their environmental impact, with the aim of cutting down water and energy usage in both commercial and residential buildings.

There are tonnes of fantastic cycling routes in Singapore too, and a great public transport system that means you won’t have to rely on having personal transport.

Copenhagen has previously been voted the most eco-friendly city in Europe by the Siemens Green City Index, described as being “ambitious on limiting carbon emissions” and with a target to become the first carbon-neutral city in the world by 2025.

With an extensive public transport system that means you’re never more than 350 metres away from a transport stop, Copenhagen also offers cycle super highways in and out of the city. Alongside these, there are plenty of green routes and bridges that bring nature back to the city landscape while also keeping cyclists safe.

In other aspects of everyday expat life, Denmark on the whole does not disappoint. Work-life balance and family wellbeing are rightly perceived as being of huge importance, and InterNations Expat Insider survey ranks Denmark as the best place in the world for family life. 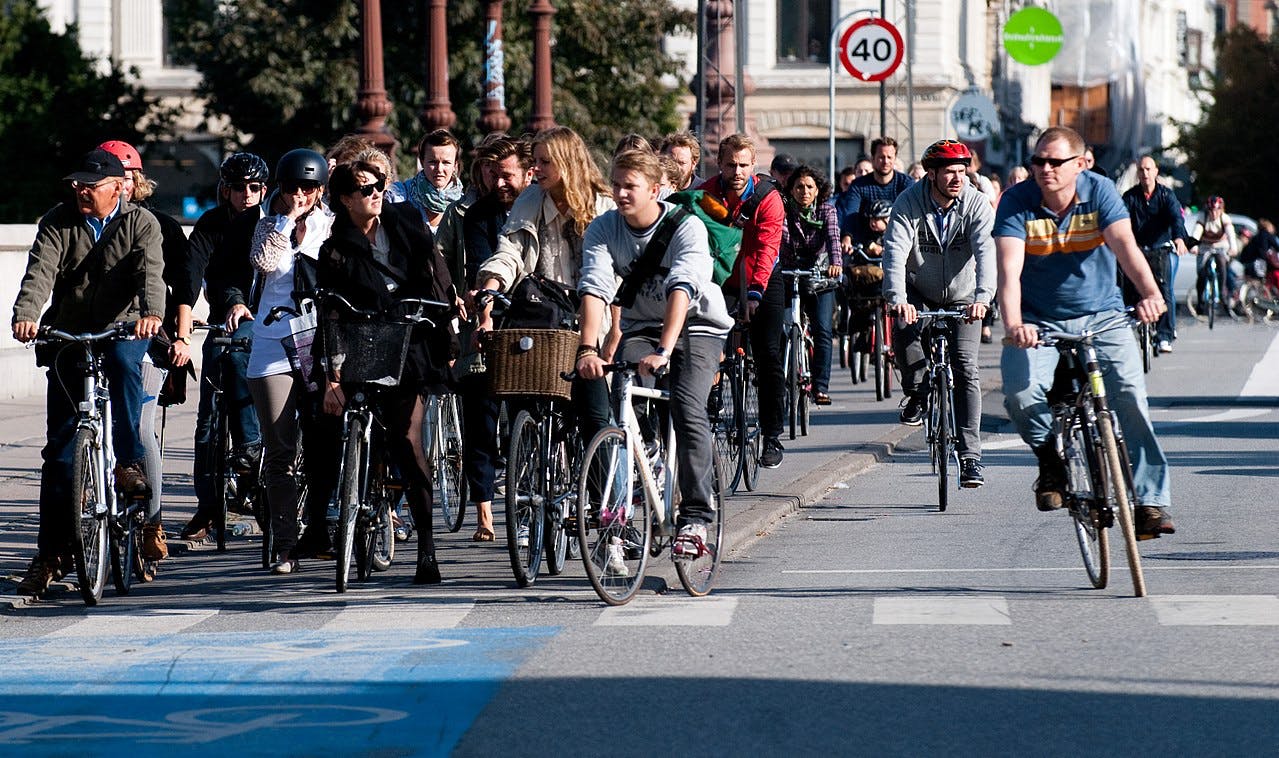 Rush hour in Copenhagen, where 45 per cent of the population commute by bicycle to their work or study places each day. Image: heb, CC BY 3.0, via Wikimedia Commons

If you like to shop local, the vast and varied farmer’s markets Cape Town has to offer will certainly appeal. With some of the city’s power provided by South Africa’s first commercial wind farm, Cape Town also aims to have at least 10% of homes using solar power by 2020 and to source at least 10 per cent of the city’s total power usage from renewable energy by the same date.

While South Africa isn’t taking first prize in some areas of expat life, the country does rank very highly for healthcare provisions, and 92 per cent of expats surveyed by InterNations said that they were happy with the warm climate and temperate weather. Transport options aren’t as numerous as Copenhagen’s, but Cape Town is lauded for offering plenty of opportunity to be outdoors and active.

If you’re looking forward to hiking in nature, trying your hand at surfing or making friends through a football team or running club, this is one destination where you won’t struggle.

Boasting a world-leading sustainability strategy called the Greenest City 2020 Action Plan, Vancouver are working hard on what they’re calling their ‘green economy’. It consists of investment and innovation in things like local food production, green building design, clean technology and alternative energy, among other things.

Dotted with farmer’s markets, walkways and cycle paths, Vancouver has seriously ambitious targets to hit in the next few decades. The city’s long-term goal is to become a zero waste destination by 2040, and to run on 100 per cent renewable energy before 2050.

Canada is in the top 5 countries worldwide for expat living, rated by HSBC’s Expat Explorer survey as being one of the 10 best locations for things like quality of life, safety, expat integration and healthcare provision. It’s deemed to be the most tolerant country in the world, and Vancouver in particular is known for its laid-back feel when compared to other major cities like Toronto or Calgary.

Regardless of whether you’re moving temporarily or looking for a long-term relocation, seeking a new life abroad doesn’t have to mean compromising on any green principles you might have. These are just a few of the great possible choices out there for an eco-friendly new home, each with their own unique feel, but all sharing a mutual desire to build a more sustainable society.