Staying on the 'Green Mark'

Following a revision to significantly tighten the energy efficiency requirements for a Green Mark certification scheme from November, almost 73 per cent of currently certified office buildings in Singapore could now be 'off the mark'.

Globally, the built environment is responsible for 39 per cent of carbon emissions. These emissions are a result of both the embodied carbon of the building materials, primarily steel and concrete, as well as the emissions associated with operating them.

This is why addressing the design, construction and operation of buildings is one of the many essential strategies for the world to achieve net zero emissions.

In Singapore, the Building and Construction Authority (BCA) has been encouraging the construction of energy-efficient and high-performance buildings through its Green Mark certification scheme since January 2005. However, to help Singapore further raise its built environment’s sustainability standards tailored for the tropical climate, the BCA has announced the new BCA Green Mark 2021 scheme (GM 2021) on November 1.

Under the updated scheme, there are several significant improvements that promise to enhance the built environment and drive decarbonisation. These include aggressive energy-efficiency standards, the drive to align with the United Nations’ Sustainable Development Goals (UN SDGs), as well as performance-based re-certification.

Among these improvements, the revised energy-efficiency standards and re-certification process will potentially catalyse significant reduction in energy consumption and carbon emissions from buildings.

In the previous Green Mark certification scheme, the ratings were based on the number of points accumulated from fulfilling various assessment criteria, including energy- and non-energy-related components. In addition, there were prerequisites for chiller efficiency for each certification level. As a result, a higher rating may not always correlate to a more energy-efficient building, as some points may have been scored for non-energy-related items.

Furthermore, a building could re-certify under the same certification level through a simplified process, which did not require the applicants to fulfil specific targets for energy use, provided that there were no major retrofit.

GM 2021 seeks to address these issues. Under the new standard, the certification level is solely based on energy efficiency. This helps to ensure that the higher-rated buildings operate more efficiently. In addition, five sustainability sections have been created to address the non-energy components and building projects may pursue recognition in any or all of these sections. Buildings that fulfil the requirements will be awarded badges to recognise their exceptional performance in the respective areas of sustainability.

Equally significant is the change to the criteria for re-certification – now known as In-Operation.

GM 2021’s In-Operation requires buildings to submit energy consumption data for the last three years. The certification level is based on the building’s Energy Usage Intensity (EUI), which is the annual energy consumption of a building, divided by the gross floor area. The threshold for each certification level has been tightened and buildings are now required to actively manage energy usage to retain their Green Mark rating.

To assess the impact of this change, we examined the performance of more than 100 large office buildings in Singapore, based on the data collected from the BCA’s Building Energy Submission System.

This study focused on the reported energy use of commercial office buildings that have a gross floor area of more than 15,000 square meters and had attained a Green Mark rating in 2019. Our analysis was conducted based on the electric usage data from 2019, which is a more reasonable and accurate reflection of how office buildings would have typically operated prior to the COVID-19 restrictions. As shown in the figure below, among the large office buildings certified under the earlier Green Mark certification scheme, over 60 per cent had achieved a Platinum rating, which is the highest level of certification. 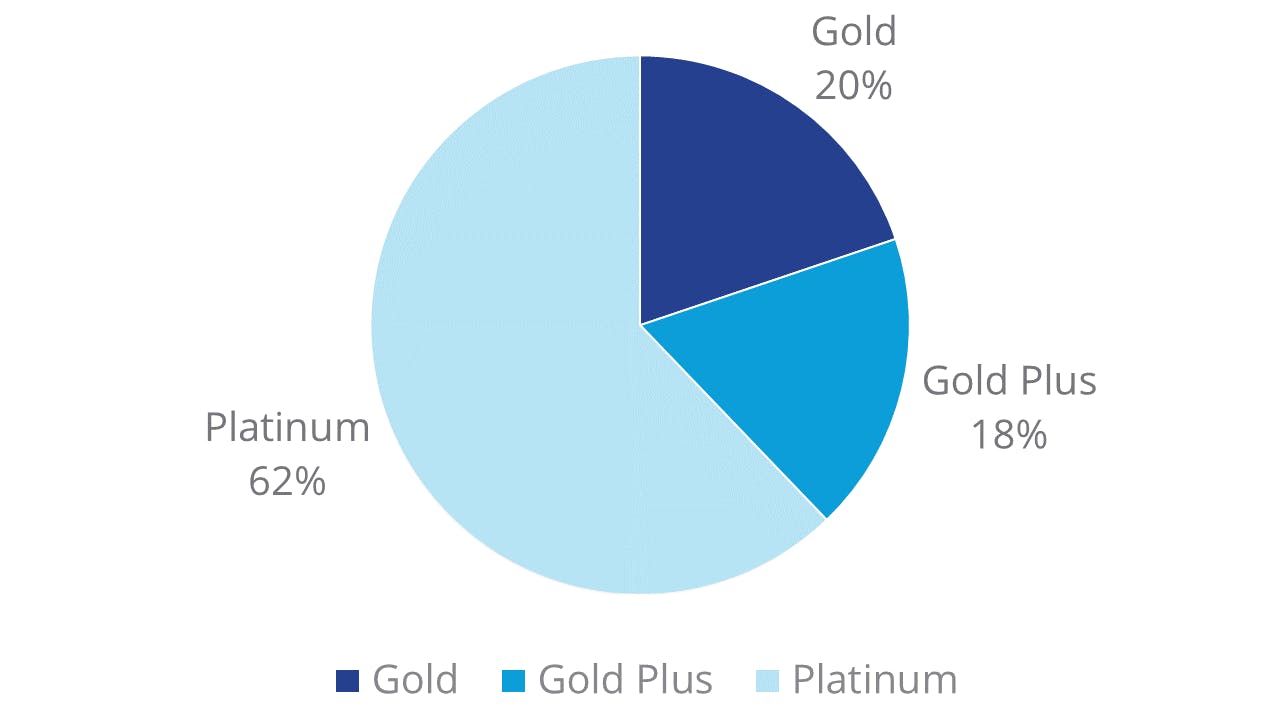 Breakdown of Green Mark ratings for large office buildings in Singapore. More than 60 per cent had achieved a Platinum rating, which is the highest level of certification. Image: Colliers

However, when the new standards under GM 2021 were applied to the same office buildings upon re-certification, the percentage of office buildings with a Platinum rating significantly shrunk by 68 per cent, while those with a Gold Plus or Gold rating also saw a marked decrease. In fact, almost two out of every three office buildings would not even qualify for a rating, as shown in the figure below. 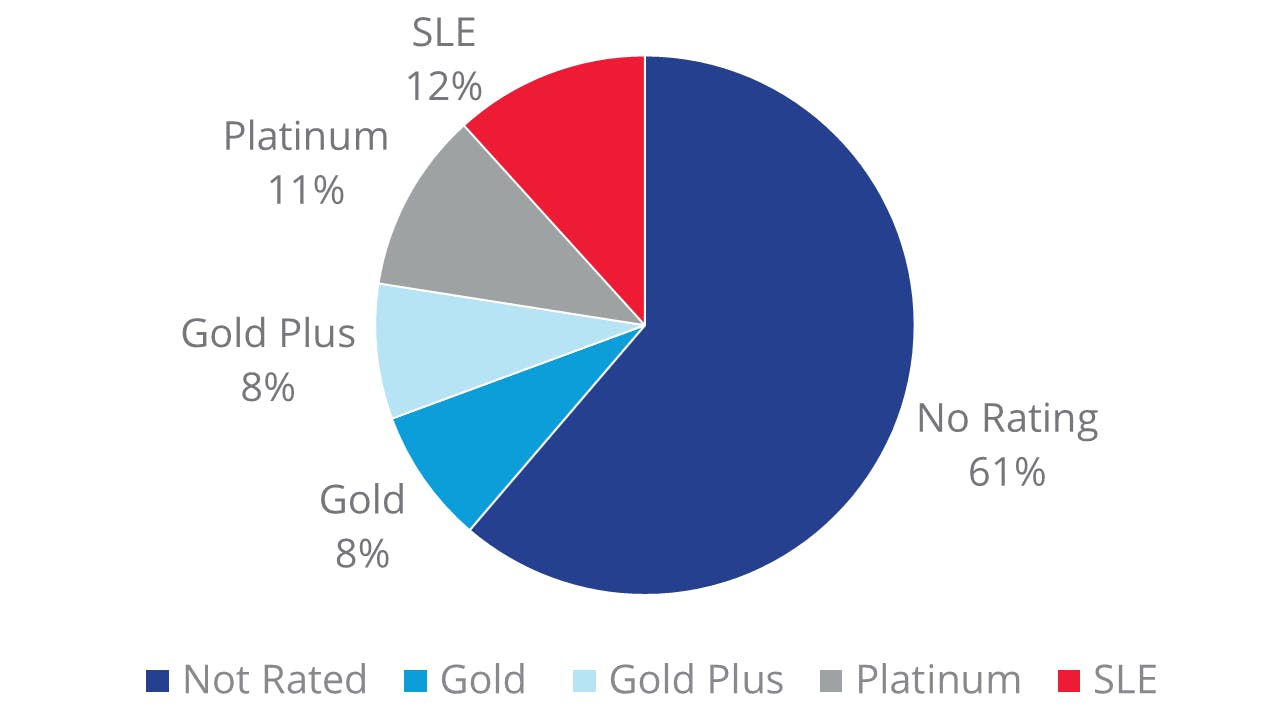 In actual numbers, shown in another figure below, 36 of the 69 office buildings that are currently certified Platinum would not even receive a rating under new GM 2021 framework – this means that more than half of the office buildings currently with a Platinum rating would be unrated under the new scheme. 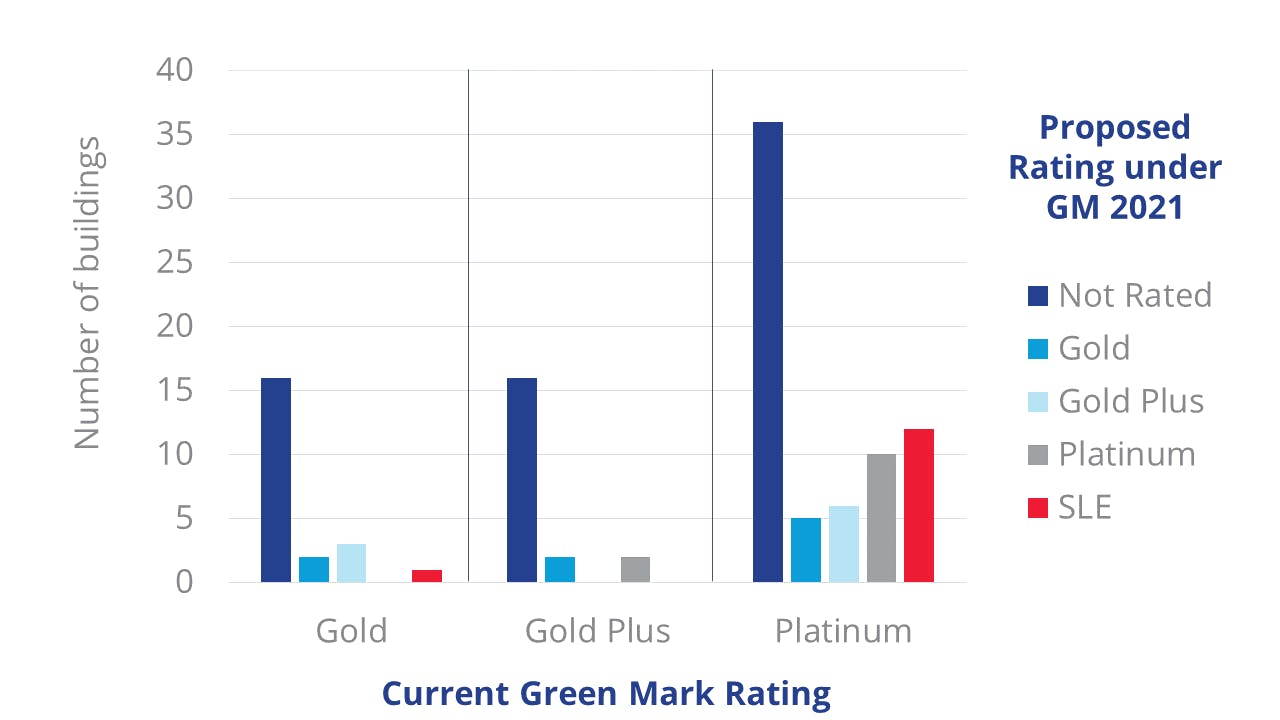 What are the implications for building owners and operators?

The new scheme will pose a considerable challenge to the owners and operators of all buildings, not just office buildings, and it will have significant material consequences for the entire real estate industry in Singapore.

In the current environment, where office tenants are increasingly looking for energy-efficient and green office spaces, many organisations have developed sustainability guidelines that specify the minimum green rating standards for the spaces they lease. A shake-up in the Green Mark ratings of buildings with these new standards is likely to drive tenants to relocate to buildings that are more aligned with their sustainability objectives.

Hence, building owners should start to act now by assessing their building’s EUI and identifying the areas that need to be more energy-efficient, such as the cooling system, lighting or tenant-controlled spaces. By doing so, they can improve their operations, secure their Green Mark rating, reduce expenses, improve tenant satisfaction, and future-proof their buildings.