A recent report by shipping and advisory giant DNV GL says that most Sustainable Development Goals will not be met by 2030. To get there, business needs to break the rules of the old order, says Volans chairman John Elkington.

Maybe it’s galloping old age, but few things enrage me more than people running stop signals—whether bus or truck drivers, motorists or cyclists. Partly it’s having been hit so many times by all of the above, whether as a cyclist or pedestrian.

Six major accidents, four times unconscious, twice with three broken ribs. The idea of encouraging business leaders to run red lights takes me well outside my comfort zone—but that’s what we must do.

The red lights in question pop up early on in a new report by DNV GL, Future of Spaceship Earth. I went to the launch event in New York, just ahead of September’s UN Private Sector Forum, and was struck by the blaze of red and amber lights in their visual mapping of our prospects of achieving the Sustainable Development Goals by 2030.

Pessimists will not be surprised to hear the conclusion that none of the Sustainable Development Goals will be met in all regions of the world by 2030. In fact, “not even half of the 17 SDGs will be met in any of the regions.”

Optimists will reply, of course. If you take yesterday’s thinking and apply it to tomorrow’s problems, the outcome will be a socio-economic road wreck.

Significantly, while insisting that its scorecard approach is “useful and provides focus,” DNV GL accepts that it “falls short of illuminating the strong interdependencies between the Goals. SDG 13 on Climate Action, for example, is a game changer for virtually all the other goals.”

Think systemically and a different picture emerges. But, first, run your eye down the scorecard. The green lights tend to appear in relation to regions where the relevant goal has already largely been met (OECD, USA), or where the pace of development is fast and furious (China).

Not a single green light shows in relation to the BRISE nations—i.e. Brazil, Russia, India, South Africa and ten other emerging economies.

Likelihood of meeting the Sustainable Development Goals in five regions 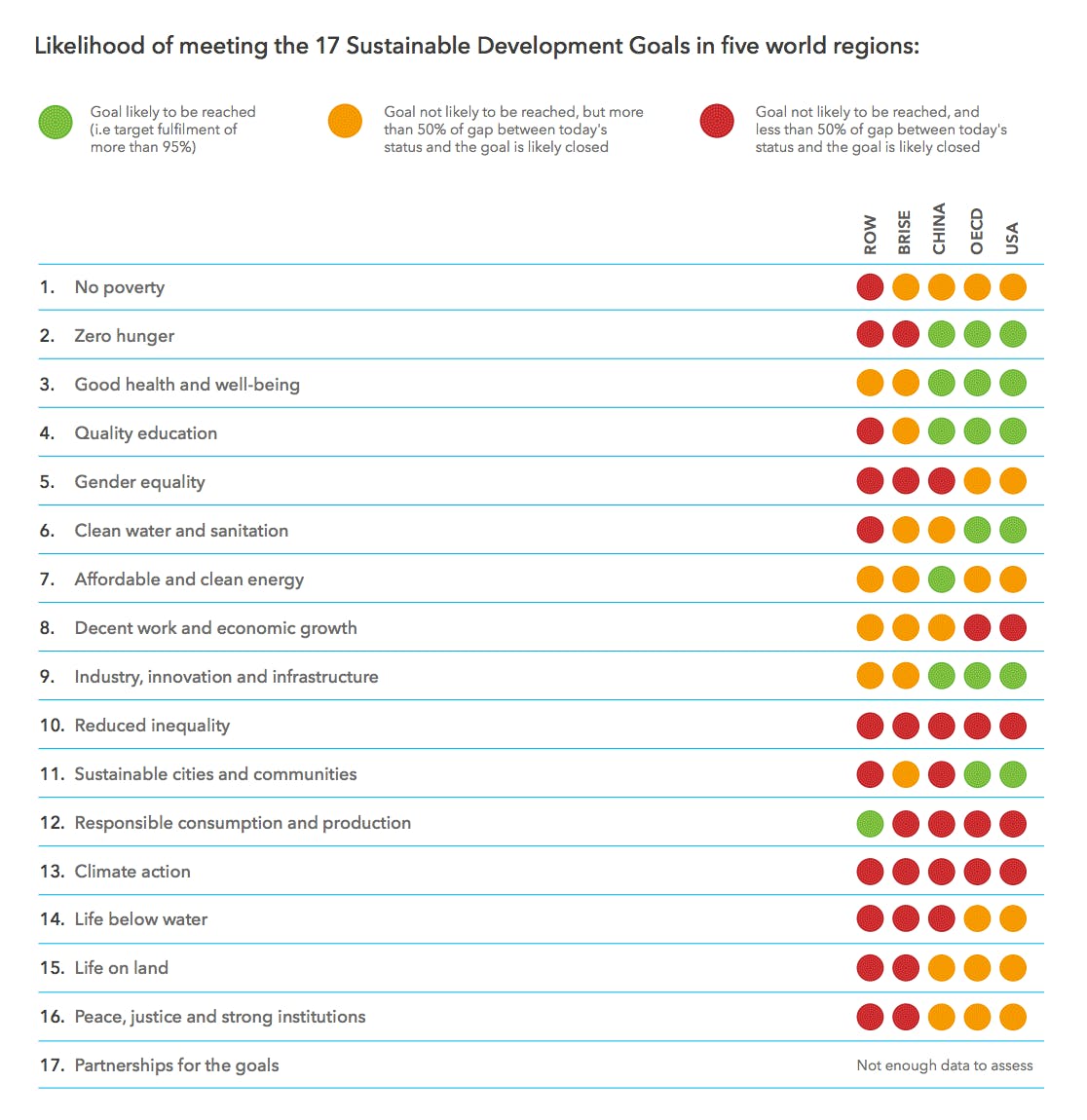 Pessimists will brandish the report’s conclusion that “the transition from fossil fuels to clean energy will not be fast enough”.

The report goes on to say: “The replacement of fossil fuel with renewable energy sources is underway. However, this shift is too slow. In order to keep global warming below 2 degrees Celsius, accumulated carbon emissions cannot pass 2900 Gigatonnes CO2: our ‘carbon budget’. On the current trajectory, we will exceed this carbon budget by the year 2037, entering increasingly dangerous climate change territory.”

Optimists will note that the world is making at least some progress towards most of the goals.

Those for health (3), education (4), water and sanitation (6), energy (7) and industry (9) show the most positive outlooks. DNV GL also concludes that we are moving in the right direction on several other goals, particularly those around poverty (1), hunger (2) and gender equality (5).

Unfortunately, progress is far from fair—particularly worrying given that inequalities, actual and perceived, are now fuelling nastier politics in the developed world.

If you take yesterday’s thinking and apply it to tomorrow’s problems, the outcome will be a socio-economic road wreck.

Ultimately, though, DNV GL concludes that lack of effective climate action will be “a showstopper”.

It adds: “Climate change is a global challenge: we succeed or fail as one planet. Lack of sufficient progress on climate action forms a barrier towards achieving most other global goals. It will be increasingly difficult to achieve most of the global goals in a world with increased climate change.”

The spotlight falls on business. Representing 60 per cent of global GDP, the private sector is pivotal. And when it comes to its ability to be a swing factor, we are told that, “Extraordinary action is not the exclusive domain of the private sector. But what business does best is innovate, and lead technological development that can leverage vast global changes.”

Seventeen companies are spotlighted, all members of the UN Global Compact. They are dubbed “Frontier Companies.” They range from ‘knowns’ like Unilever, Danone and Iberdrola to relative ‘unknowns’ like Cermaq, SolarWorld and HiTechnologies.

“Frontiers,” we are reminded, “are generally exciting but uncomfortable places: remote, risky, often lawless and conflict ridden.” The sort of places where people run lights—and shoot at them as they pass.

But even if the SDG frontier is characterized by conflict, the report acknowledges that “the conflict we see is the battle against poverty and against environmental degradation; it is the fight for dignity, for inclusive growth and well-being.”

For me, three sentences distil the conclusion: “A ‘can do’ attitude is strongly in evidence amongst companies taking action on the SDGs.  They are not seeing the SDGs as a series of trade-offs, but as an integral whole—hence seeing the possibilities of combining growth with sustainability, raising productivity and taking climate action.

These firms have transformed their business models to include elements from the circular and sharing economy, and have developed their businesses through cooperation and partnerships.”

That’s also the thrust of our new Project Breakthrough website, co-hosted with the Global Compact, and launched on that same September day at the UN HQ building. Our conclusion: it’s time to run the old order’s red lights, to break the rules that hold us back from transformation.

John Elkington is Chairman and Chief Pollinator at Volans.