Is China building more waste incinerators than it needs?

Several provinces may be investing too much in incineration, overlooking improvements in waste sorting and recycling.

The vision to make China an “ecological civilisation” has been espoused at the highest political level. It includes, among other things, efficiently using resources, reducing waste and using extracted materials in a circular manner. Reaching these objectives will require timely and well-planned investments in waste-management capacity.

China has invested largely in incineration over the past decade to help manage the massive growth in the amount of municipal solid waste, produced by homes and businesses. The latest government data, from 2018, shows that 99 per cent of collected waste was managed, up from 67 per cent in just 10 years.

However, in the coming years, more cities will follow Shanghai by making it compulsory to sort household waste. This is expected to reduce the demand for mixed-waste management.

Our research shows that these sorting schemes should be an important consideration for provinces as they plan new capacity to manage waste.

The trend of substantial investments in incineration could hinder the development towards an ecological civilisation if it continues.

In our recent paper “Waste Available to the Chinese Energy Sector – Provincial Projections to 2050” my co-authors and I have combined econometric modelling with policy analysis to project how the make-up and quantity of collected waste could develop in Chinese provinces. 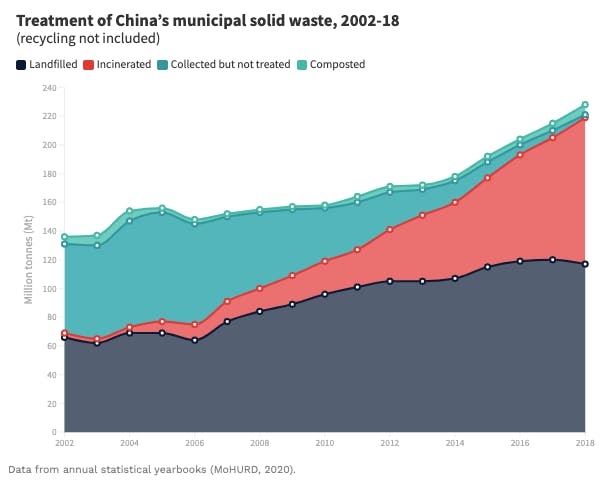 The forecasts focus on waste used to produce energy and only cover waste collected through official channels, not total generated waste. In China, the unofficial sector manages around a quarter of all waste generated, although this is likely to change as the official system collects and manages more recyclables.

In the short term, the results show that several provinces, including Anhui, Tianjin and Zhejiang risk overinvestment in new incineration capacity because planned capacity for dealing with mixed waste exceeds the projected quantities.

These findings are true even without sorting of food waste or an increased focus on removing recyclable waste from the mixed waste stream. If the success of the waste-sorting scheme in Shanghai, which started last year, is replicable in other cities then several provinces could see reductions in mixed municipal solid waste as soon as this year.

Of course, changing people’s behaviour to improve waste sorting can take a long time. Yet in Shanghai, great quantities of recyclables and organic waste have been separated in the city in a short time. Key to the success of the scheme has been extensive enforcement.

This level of enforcement may not be possible across China. However, based on assumptions that are conservative compared to the Shanghai case, our paper projects 39 per cent of food waste to be sorted by 2030 and 57 per cent by 2050, amounting to 61 million tonnes in 2030 and 109 million tonnes in 2050.

This waste should be managed properly, for example in anaerobic digesters, to produce biogas and fertiliser. The gas produced can be combusted or upgraded to natural gas quality for use in the energy system.

Sorting food can also improve the management of mixed waste. The energy content of Chinese municipal solid waste is typically too low to sustain combustion in incineration plants so fuel has to be added, often coal. Separation of food waste from mixed waste makes self-sustaining combustion possible and could reduce and even eliminate the use of co-firing with coal in about five years, our study finds. 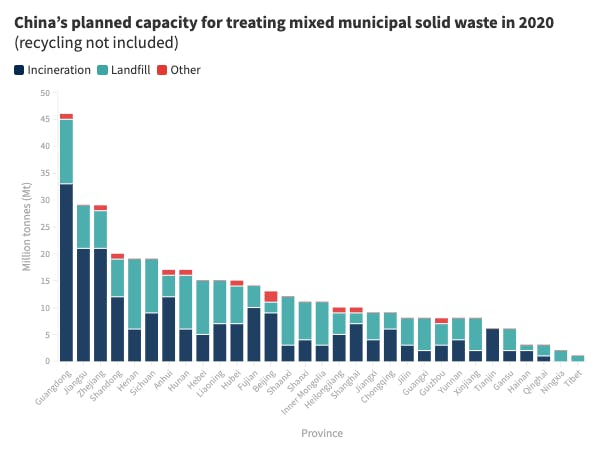 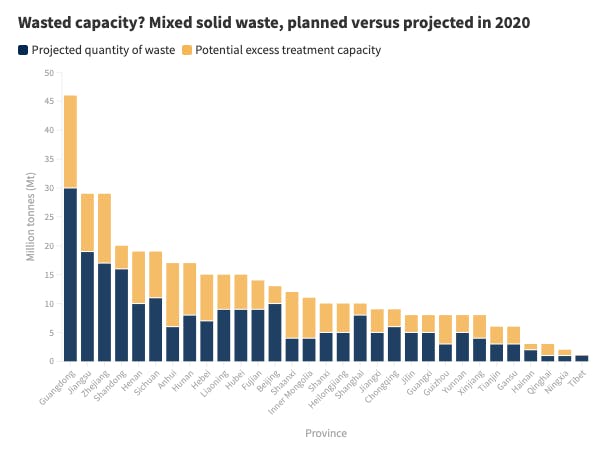 The extensive investments in municipal solid waste incineration well underway in China will significantly reduce the need for landfills. However, the path to an ecological civilisation is more ambitious than that; it includes waste reduction, sorting and increasing efficiency.

Waste management planning should align with these aims to avoid overinvestments in, for example, incineration capacity. The trend of substantial investments in incineration could hinder the development towards an ecological civilisation if it continues, because utilising built capacity will be more profitable than changing practices and investing in sorting and recycling facilities.