From Copenhagen to Singapore: A walking journey

Copenhagen is one of the world's most liveable cities, largely due to its emphasis on walking and cycling. What is its secret and what can Singapore learn from it? Eco-Business editor Jessica Cheam travels to the Danish capital to find out.

German philosopher Friedrich Nietzsche once said: “All truly great thoughts are conceived while walking.” This might help explain why as a country, Denmark is consistently ranked highly in global indices on education, health care, social mobility and human development.

Its capital Copenhagen is considered one of the most liveable cities in the world, and experts often attribute this to its people-centric urban planning which promotes cycling and walking above all else.

In 2013, non-profit organisation Walk21 declared Copenhagen the most walkable city in the world. Its research showed people spent more time walking each day – about 52 minutes per day - in Copenhagen than any other city.

While filming a Channel NewsAsia documentary on climate change in the Danish capital last month, I experienced for myself what a cinch it was getting around on my two feet—whether cycling or walking.

One particular highlight was walking the stretch of the city’s most famous street—Strøget. At 1,111 metres long, it is also Europe’s longest pedestrian walkway. 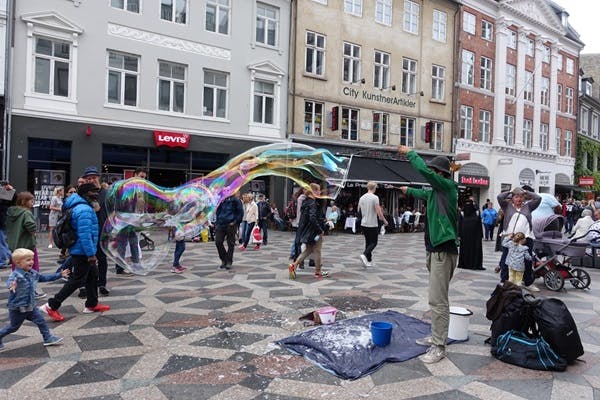 Strøget provides pedestrians with a seamless walking experience – shops, cafes, and various amenities line the street, with the ebb and flow of human traffic unimpeded by vehicles.

On one particular day, after long day of filming in the city, we were treated to a glorious summer evening with the sun shining on our faces well after 8pm as we sat with a glass of wine on the city square, listening to buskers adding their musical soundtracks to the city’s urban life. 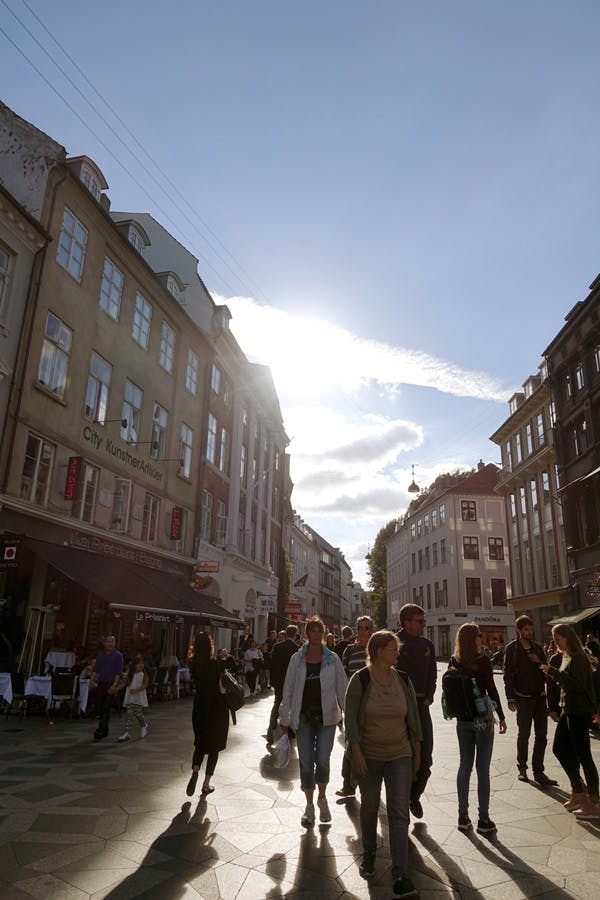 Copenhagen – in it for the long run

All the walking got me thinking. What is it about Copenhagen that makes it such a walkable, liveable city?

To be fair, such an effort takes decades. As early as the 1960s, Copenhagen began creating areas exclusive to pedestrians and cyclists, guided by the work of Danish architect Jan Gehl, who earned a worldwide reputation for enhancing urban life by redesigning cities towards people.

Today, the city is renowned for its cycling and pedestrian networks – complemented by an ultra-efficient public transport system. They are part of a larger active mobility strategy that is key to helping the city achieve its ambition to be  carbon neutral by 2025. This means the city will generate net zero emissions – a commendable effort, especially in light of the Paris Agreement signed by the world’s nations last December to limit climate change.

While in the city, I went in search for answers to my question and where better to look for it than Gehl itself.

The architectural firm has a studio in Vesterbrogade and it is here that I speak to Gehl’s partner, director and team lead design, Camilla van Deurs, who specialises in intelligent urban development that improves liveability for citizens as well as builds resilience in cities. 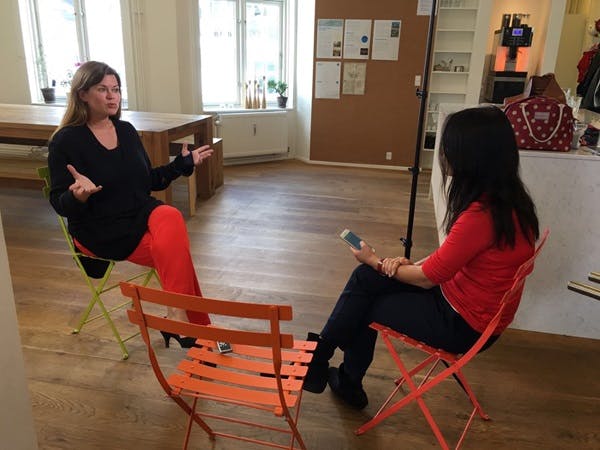 “Planners in Copenhagen have consistently over more than 50 years worked towards the same goal of creating good pedestrian environments providing a coherent network of streets and spaces that invite everyone to enjoy the city,” she says.

For the Danes, walking is not only a leisure activity, but also a means of active mobility. Jan Gehl had pioneered studies on how Copenhageners used their city, which provided valuable documentation to base political decision-making on, she explains.

Over the last 15 years, the philosophy of “pedestrians as a priority” has been implemented in every aspect of the city’s planning departments in the city and also by the planning professionals across Denmark.

This pervasive thinking is encapsulated in a key document, ‘A Metropolis for People’, published by the Municipality of Copenhagen in 2009 which set out this vision:

“We will become the world’s most liveable city: a sustainable city with urban space inviting people to a unique and varied urban life. We will become a metropolis for people.”

The city’s emphasis on walking is a no-brainer, says van Deurs. “Walking is our most basic form of movement. It is easy, healthy, and sustainable. It costs nothing to walk… and it offers us the opportunity to use our senses, and go on a voyage of discovery and to meet other people.”

Thinking about Singapore, she highlights that the city-state has the right physical attributes to develop a more pedestrian-friendly environment. This includes a high urban density, as well as a generally flat terrain.

The key challenge, however, is our hot and humid climate.

The architect is an experienced traveller to Singapore – having been involved in some work with the Centre for Liveable Cities – and we shared a chuckle about sweating it out while walking or cycling in sunny Singapore. She notes that while there is an increasing provision of covered linkways from MRT stations to neighbourhood centres, there are not many areas in the city’s main areas of interest that offer sheltered pedestrian environments to help mitigate the heat.

One key approach could be to look at Singapore’s popular spots and to assess whether adequate sheltered pedestrian areas have been provided, she suggests. Another widely-used Singaporean typology is the raised indoor pedestrian corridor connecting one shopping mall or office building to another without any contact to the street, she notes.

This type of pedestrian connection is difficult to integrate within the city context and provides separation rather than integration of pedestrians into the urban environment.

“In my experience, there are better and more inclusive ways of providing comfortable, shaded and safe sidewalks and pedestrian connections,” she says.

The interview certainly provided some food for thought for the journey back from Copenhagen to Singapore.

The city’s urban planners have in recent years dedicated efforts to improve pedestrian connections.  The Urban Redevelopment Authority’s (URA’s) Draft Master Plan, for one, recognises the need to enhance the walking experience in Singapore to improve the accessibility of public transport hubs and amenities.

Planners say they are taking a multi-level approach to enhance ground level, underground and aboveground connections to enhance walkability in the city-state.

The residential area of Emerald Hill, for example, is often cited as a successful shared street in Singapore, modelled after the Dutch ‘woonerf’ concept. That is, a road in which devices for reducing or slowing the flow of traffic have been installed. Personally, I feel there is huge potential for interesting pockets of the country to also adopt this concept.

In other respects, our urban planners have done well to improve walkability in the city, including the  construction of waterfront promenades along the Singapore River and around Marina Bay. The barrier-free Jubilee Bridge – a 220m-long pedestrian bridge which links the Esplanade promenade to Merlion Park – is a particular highlight.

Walking is our most basic form of movement. It is easy, healthy, and sustainable. It costs nothing to walk… and it offers us the opportunity to use our senses, and go on a voyage of discovery and to meet other people.

Taking the next step

But if our urban planners are serious about transforming Singapore into a walking city, there is an urgent need for them to look into how our road space is shared among motorists, cyclists and pedestrians. 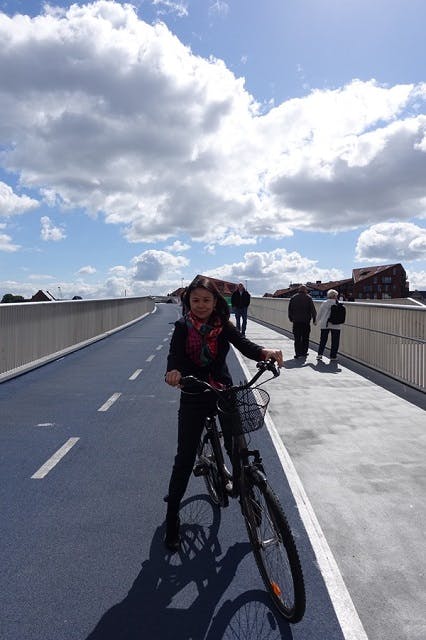 Earlier this year, the Active Mobility Advisory Panel recommended shared paths for cyclists and pedestrians, which was accepted by the Transport Ministry. This was regarded by many as a huge step backwards.

As one particular citizen noted in a recent Straits Times Forum letter, advocates of such shared paths “downplay cyclist-pedestrian conflict” when in reality this is inevitable.

Countries such as Denmark and the Netherlands, which have a large cycling population, prioritise the safety and convenience of cyclists over efficient movement of motor vehicles, without compromising safety and walk quality for pedestrians – this is exactly the reason why it has been successful, the writer points out.

Something van Deurs mentioned in Copenhagen struck a similar chord with me. In Copenhagen, cars, cyclists and pedestrians have their own roads; and each lane, even while running parallel to each other, is demarcated by a little curb that sets it apart from the rest.

“This little curb protects the cyclists and pedestrians, and the system is always the same throughout the city,” she explains. Singapore needs to start thinking about how we can do the same.

My one “great” thought from this walking journey: We need to seriously view walking as an equal mode of transformation, if we truly want Singapore to become a walking city.