Food, not steel, is our biggest climate challenge

Since 2006, the estimated costs of achieving net-zero greenhouse-gas emissions from the world’s energy, building, industrial, and transport systems have plummeted. In most sectors, a green transition will cost consumers little.

Climate-policy discussions often focus on who will pay the cost of achieving a zero-carbon economy, with a particular focus on industrial sectors such as steel and cement. But the overall costs are strikingly low, and our biggest challenge lies in the food system, not industrial products.

The latest report by the United Kingdom’s Climate Change Committee, for example, shows that cutting UK greenhouse-gas emissions to net zero by 2050 would reduce British GDP by only 0.5 per cent.

The Energy Transitions Commission’s “Making Mission Possible” report estimates a similar total cost of 0.5 per cent of global GDP to reduce emissions from the world’s energy, building, industrial, and transport systems to zero by mid-century.

These estimates are well below those produced by older studies. The seminal Stern Review on the Economics of Climate Change, published in 2006, suggested costs of 1-1.5 per cent of GDP to achieve only an 80 per cent reduction in emissions.

Methane emissions from livestock and manure have a global warming effect greater than the three gigatons of carbon dioxide from steel production.

This welcome change reflects the dramatic and unanticipated decline in costs for key technologies – with onshore wind electricity costs down 60 per cent in just ten years, solar photovoltaic cells down over 80 per cent, and batteries 85 per cent. These costs are now so low that using zero-carbon products and services in many sectors will make consumers better off. 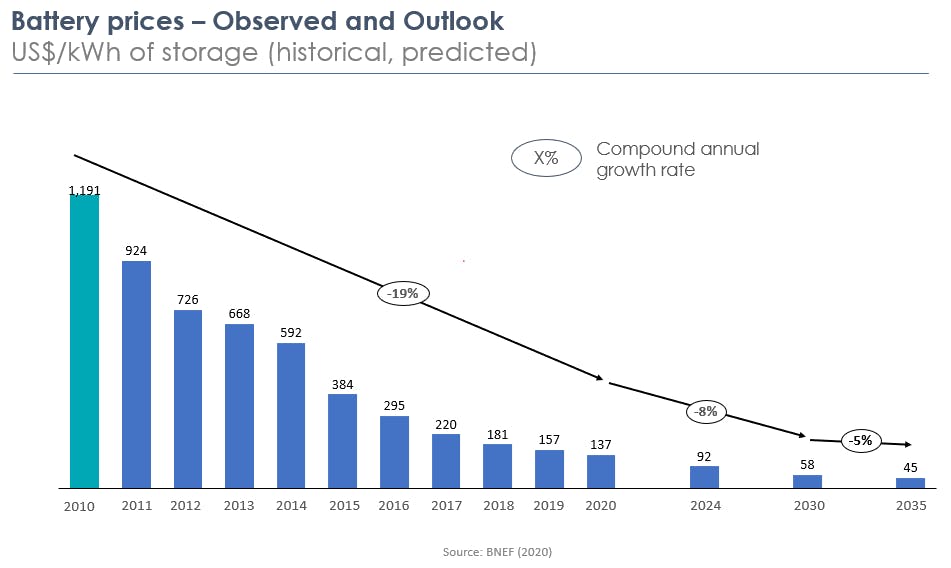 For example, future “total system costs” to run near-zero-carbon electricity systems – including all the storage and flexibility needed with unpredictable sources such as wind and solar – will often be below those for today’s fossil fuel-based systems.

And within ten years, consumers around the world will be better off buying electric autos, paying slightly less for the vehicles and far less for the electricity that powers them than they do for the diesel and petrol they buy today.

In some hard-to-abate sectors such as steel, cement, and shipping, however, decarbonisation is likely to impose a significant cost.

Well before 2050, zero-carbon steel could be produced by using hydrogen as the reduction agent rather than coking coal, or by adding carbon capture and storage to traditional blast furnaces. But doing so might increase costs by 25 per cent, or about $100 per ton of steel.

Long-distance ships could be powered by ammonia or methanol, but fuel costs might increase by over 100 per cent, and freight rates by 50 per cent. As Bill Gates puts it in his new book How to Avoid a Climate Disaster, in some sectors, we face a “green cost premium” versus today’s carbon-emitting technology.

So it is vital to focus research and development and venture-capital investment on breakthrough technologies that might reduce this premium. But it is also important to recognise that even if the “green premium” lingers, the cost of decarbonising these sectors will be so small that consumers will hardly notice.

Ask yourself how much steel you bought last year. Unless you are a purchasing manager, the answer is probably none directly. Instead, consumers indirectly purchase steel embedded in the products and services they consume – in autos, in washing machines, or in health services delivered at a hospital built with steel.

World Steel Association figures indicate that “true steel use per capita” is 300-400 kilograms (661-882 pounds) annually in Europe and the United States. So, if the steel price rose by $100 per ton, consumers would be just $30-40 worse off.

That trivial cost reflects the crucial difference between the green premium on intermediate goods and the “green consumer premium” on final products. An increase in the steel price of even 25 per cent will add less than 1 per cent to automobile prices. Shipping freight rates might rise by 50 per cent, but that would increase the price of imported clothes or food by a similarly trivial amount.

But higher costs for intermediate products still pose a major policy challenge. A steel company that commits to a zero-carbon target will find itself at a crushing disadvantage if its competitors do not. Imposing a carbon price on heavy industrial sectors could overcome this problem, but only if the price is applied worldwide or combined with border carbon tariffs against countries unwilling to impose it.

In shipping, regulation by the International Maritime Organisation could ensure that all companies move in step, and the impact on consumer costs would be trivial.

By contrast, food prices and consumer food preferences are non-trivial issues. Few of us buy steel directly, but everyone buys food, which even in rich countries accounts for 6-13 per cent of total household expenditure and much more for lower-income groups. For consumers, a 10 per cent green premium for food would matter more than even a 100 per cent premium for steel.

Within the food sector, moreover, meat production is highly emissions-intensive. Methane emissions from livestock and manure have a global warming effect greater than the three gigatons of carbon dioxide from steel production, and an additional five gigatons of CO2 results from land-use changes, such as when a forest is converted to soybean production for cattle feed.

Here, too, technological solutions may be possible, but major challenges remain. Consumers do not care about the specific character of the steel they indirectly consume, but beef eaters have strong opinions about the texture and taste of steak, which synthetic meat production cannot yet replicate.

And while the green premium for synthetic meat over animal meat is falling, it must get close to nil to avoid material impact on consumer budgets.

This could change, however, if people decided that they would be happy with less meat and more vegetable-intensive diets, which also cost less. In that case, food could become like road transport, with consumers gaining from the shift to zero carbon rather than facing a cost burden.

Adair Turner, Chair of the Energy Transitions Commission, was Chair of the UK Financial Services Authority from 2008-12. His latest book is Between Debt and the Devil.