Climate risk stress tests for banks could become the most important tool to nudge the financial system towards low carbon investment.

You might sometimes be irritated when banks ask endless questions to check up on your creditworthiness. Perhaps it will give you a measure of satisfaction to know that banks in turn are increasingly being asked difficult questions to justify themselves in the form of climate risk stress tests.

Some believe that stress tests will become the most important tool to nudge the financial system towards low carbon investment.

In June 2021 the Network for Greening the Financial System (NGFS), a coalition of 91 central banks and monetary supervisors, produced the second iteration of their climate scenarios designed to make stress testing easier for banks, investors and insurers. The Monetary Authority of Singapore and the Hong Kong Monetary Authority are both members of NGFS.

These stress test initiatives stem from the recommendation of the Taskforce on Climate Related Financial Disclosures (TCFD) that climate risk reporting should include scenario planning. This forward-looking exercise is intended to identify future risk from a warming world.

From TCFD itself through to those institutions trying to implement its recommendations, nobody has found the exercise of scenario planning straightforward. The physical impact of climate change is affected by the actions governments take on reducing or adapting to global warming, while the level of government climate action itself will be influenced by the increased occurrence of extreme weather events. The stronger policies are on clean energy, the less policies need to focus on energy efficiency.

There are strong public views on both the cost of decarbonisation as well as the cost of doing too little too late. Social fallout from the physical impacts of climate change will, over time, produce profound political and economic pressures. Scenarios also need to determine whether predictions about valuable technological climate fixes – from new energy sources, to carbon removal and geoengineering – are the answer to our problems or just wishful thinking. Scenario planning asks us to take all these interdependent factors and plot the risks and costs for business.

Going yet one step further, these multiple interdependent factors will affect different business aspects in different ways: operations, supply chains, market demand, brand, asset values, finance and reputation. Finally, the impact of each of these will depend a lot on each company’s business sector and geographic coverage.

The Network for Greening the Financial System has tried to render the multidimensional puzzle into a manageable guide. Their starting point is policy-based. They imagine six possible levels of government action running from prompt action holding temperature rise below 1.5°C to no improvement in current policies leading to a rise in temperature of at least 3°C’ .

NGFS then try to focus on a few key factors with economic implications for the finance sector. This includes physical risk as well as the weight of new government policies, carbon prices, technology change and regional policy variations (with implications for trade and cross border legislation).

Even by simplifying the future to a small list of indicators, analysis on practical business choices remains very complex given the interplay between these different factors. Pressing on, the NGFS urges finance institutions to look at credit risk, market risk, underwriting risk, operational risk and liquidity risk in each scenario.

The whole exercise leaves the impression that financial researchers tend to keep within a comfort zone, working on familiar factors such as energy and carbon prices, while avoiding the difficult issues where climate impacts in the social and political realm rebound into the economy. 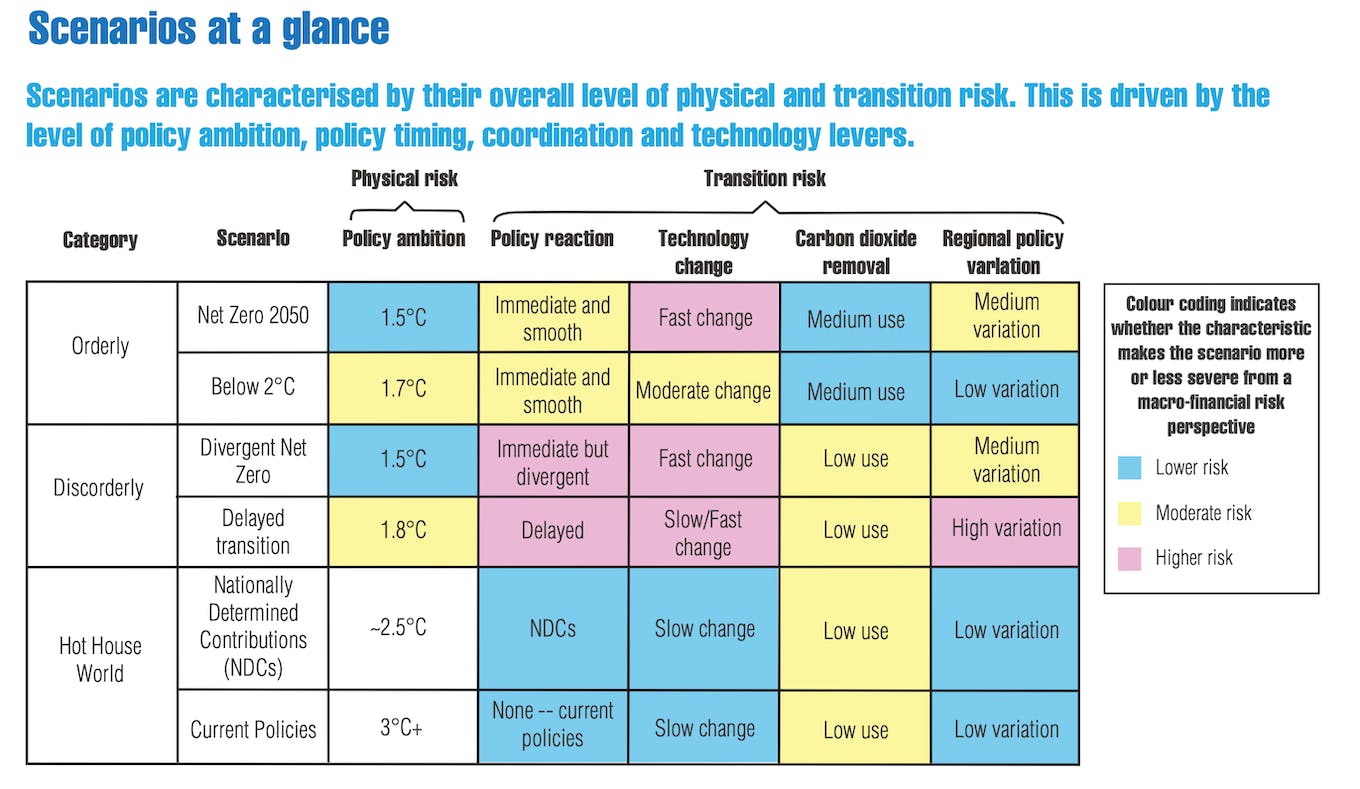 The respected economists Nicholas Stern and Joseph Stiglitz have criticised the Integrated Assessment Models used by some in the economics profession to model climate change options. They argue that the benefits of climate action are underestimated and the costs are overestimated.

Existential risk cannot be addressed with standard utility approaches. They suggest that ignoring greenhouse gas externality in market analysis is a huge mistake. Simple market analysis applied to the systemic changes needed for rapid decarbonization is, they note, a third error. Finally, to aggregate climate risk across populations and generations ignores specific threats to large groups of people.

They warn that conventional economic modelling, including Integrated Assessment Models seeking ‘optimal’ pathways can justify a world of 3°C or even 4°C temperature rise, ignoring the scientific evidence that widespread death and biodiversity extinction would result.

“[S]tudies that have focused on impacts on aggregate consumption or GDP, as conventionally measured, are likely misguided: we care about living standards, broadly defined, not narrow aggregates which are a poor measure of well-being. Climate action can enhance well-being, both through the new ways of consuming and through the avoidance of immense risk,” according to their paper.

So Central Banks also need to avoid assessing risk only in terms of columns of figures related to corporate value. Climate stress tests must take account of externalities which impact on human society and pose a risk to life.

Cool blue in a hothouse world

Perhaps the most controversial findings of this study lie with the Central Banks’ assessment of the “Hot House World” scenario. In this scenario they conclude that there are “lower risks” for “policy reaction” and “regional policy variation”.

At 3°C temperature rise, scientists have evidence that food and water systems will break down, extreme weather will be frequent with devastating impact on human life and biodiversity. At 3°C many climate tipping points will be passed which may unavoidably lead to still higher temperatures.

It is logical to conclude that, under such circumstances, countries will implement severe, even extreme policy measures to deal with mass panic, famine, forced migration or climate refuge influx, in addition to responses to other unpredictable forms of social disruption. Can we really imagine mild policy reactions or little policy variation among countries – developed and developing, rich and poor alike in a three-degree world?

Perhaps the first lesson for economists in scenario planning is to venture out of their comfort zone and begin a process of creative destruction for traditional economic models.