The Sustainable Development Goals is the world’s only plan to address inequality and protect the environment, but Australia is performing poorly.

Last month the SDG Index and dashboard report ‘Global Responsibilities: Implementing the Goals’ was released, a comprehensive review of UN member states and their progress towards the Sustainable Development Goals (SDGs), the 17 Goals to transform our world.

The report provides an in-depth assessment of commitment from governments showing that Australia is not only lagging behind its G20 counterparts but has the worst performance in the world on climate action, Goal 13.

Australia was ranked 37th out of 156 places for its action on the SDGs overall. Outranked by the US at 35, New Zealand in 17th place, and Japan at 15. Top of the list, unsurprisingly, were the Scandinavian countries in first, second and third: Sweden, Denmark and Finland respectively.

Integrating the SDGs still poses major challenges for all countries but progress is slow, with large variation in leadership and embeddedness of the SDGs. Australia was 16th place in the G20 national coordination and implementation rank, as shown below. 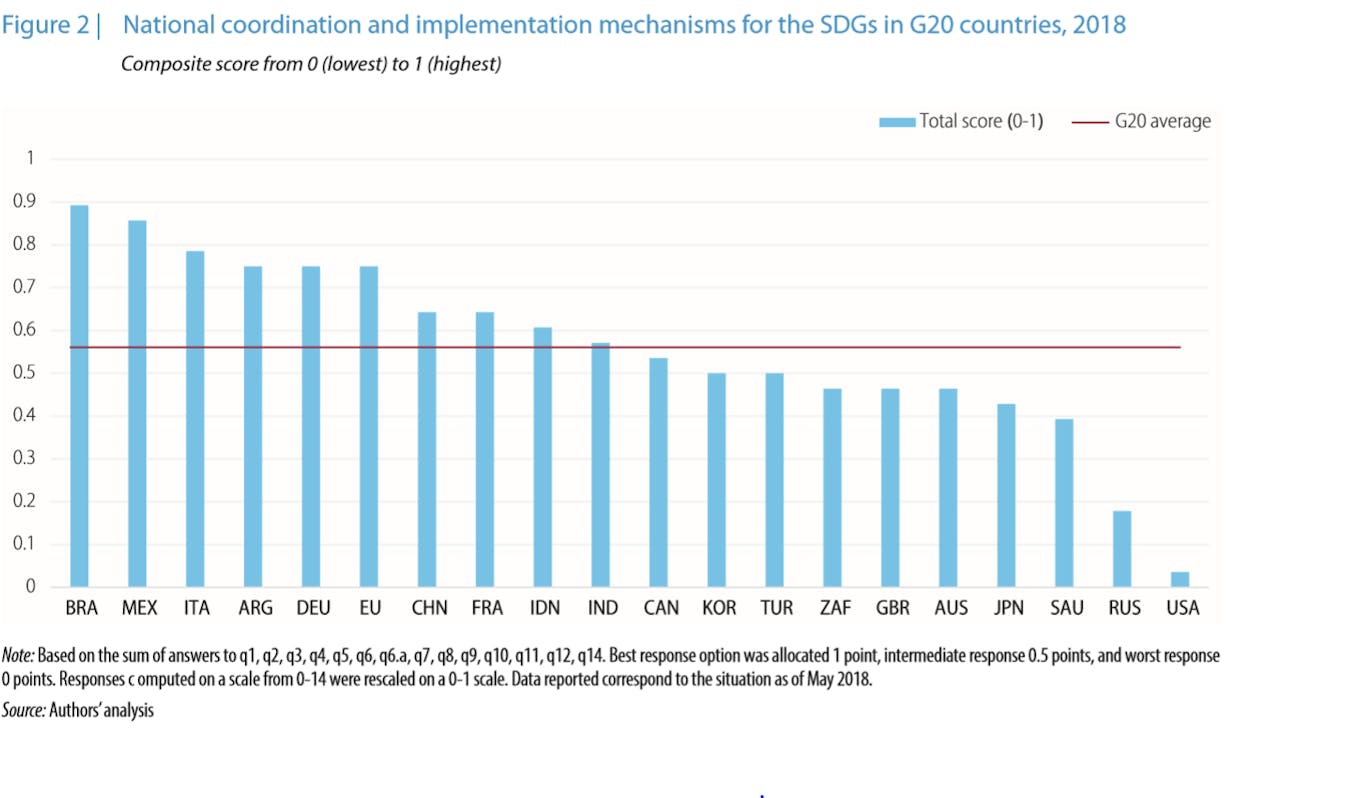 Where and why is Australia failing?

Australia is performing badly on the majority of environmental goals.

Despite the Index report being compiled before Australia’s Voluntary National Review (VNR) on SDGs, a self-assessment on performance to be presented at the UN’s high-level political forum, it still remains an accurate description on the areas where Australia is facing the most challenges.

Take a look at the results for each Goal.

Given that 85 per cent of Australia’s current electricity production relies on coal and gas, high CO2 emissions from fuel combustion and export of goal/emissions (Metric tonnes CO2/Terra watt hour 1.6) was expected. The Index reported the share of renewable energy in total energy consumption as 9.2 per cent, however the VNR reports that it now stands at around 15 to 16 per cent of Australia’s electricity.

Poverty among the elderly stands at 25.7 per cent. The Index doesn’t mention one of Australia’s most disadvantaged groups, Aboriginal and Torres Strait Islander peoples. The Closing the Gap framework was developed by the Government in 2008 to address Indigenous disadvantage. The framework now in its 10th year is due for a refresh.

Australia performed badly here due to its high level of electronic waste of 20kg per capita, and emissions caused in the production of goods. Sulphur dioxide produced per capita stood at 65.4kg, and reactive nitrogen production measured 86.5 kg per capita.

The government has been slow to regulate the manufacturing and waste industries, and only developed a National Waste Policy in April this year, which sets out the government waste management and resource recovery direction to 2020.

The Australian Packaging Covenant Organisation was also given the green light earlier this year to manage the voluntary target of making 100 per cent of packaging reusable, recyclable or compostable by 2025.

There are still major challenges in the recycling industry following China’s recycling ban, low awareness of e-waste and a nascent circular economy.

Australia has the ‘top spot’ for worst in the world on climate action, and scored 23.3 out of 100, the lowest of all country scores. Despite an Emissions Reduction Fund (ERF) in place and climate adaptation research taking place in universities, Australia’s economy is still running on dirty energy.

Energy-related CO2 emissions per capita are 15.4 tonnes, but the real issue here is the CO2 emissions embodied in fossil fuel exports of oil, coal and gas.

Businesses in Australia have a real opportunity to create value for their shareholders, customers and society at large by aligning their strategic plans to SDG outcomes.

Plastic pollution and land-based activity such as litter and illegal dumping, pose the greatest threats to ocean health. The Australian Ocean Health Index score was 41.3 out of 100 points, which is a reflection of the issues surrounding overfishing.

Confirming what was found in Australia’s most recent State of the Environment Report 2016, Australia’s biodiversity has continued to decline. The VNR shows that more than 1,700 species and ecological communities are threatened and at risk of extinction. Australia performed poorly on annual change in forest area, which fell by 9.4 per cent and an increase in imported biodiversity threats.

The low grade on partnerships was due to the percentage of GDP set aside for development assistance at 0.2 per cent of Australia’s gross national income.

What’s the opportunity for business?

Governments alone are unable to address the scale of the sustainable development issues the world faces today, and cross-sectoral approaches are much needed.

This Better Business Better World report released by the Business & Sustainable Development Commission, a group led by 35 CEOs and civil society leaders concluded that the SDGS could unlock up to $12 trillion in value in four major global systems–food and agriculture, cities, energy and materials, and health and wellbeing–and create up to 380 million new jobs by 2030.

Businesses in Australia have a real opportunity to create value for their shareholders, customers and society at large by aligning their strategic plans to SDG outcomes. Examples of companies using the SDGs as a management tool to enable inclusive and sustainable growth include Australia Post, Qantas, Konica Minolta and Fujitsu Australia, their case studies can be viewed on the newly launched SDG website.

We have much to do as a country to enable inclusive and sustainable growth, for both Australians and the globe.