An independent watchdog has asked the bank’s private sector arm to pay reparations for serious social and environmental impacts from at least 10 new coal-fired power plants it has bankrolled over the past decade.

The International Finance Corporation (IFC), the World Bank Group’s private lending arm, violated its own environmental and social protection policies by helping to bankroll a coal boom in the Philippines, an independent investigation published on Saturday has found.

The IFC’s internal watchdog, the Compliance Advisor Ombudsman (CAO), called on the IFC to provide remedy for the “significant adverse social, environmental and climate impacts of its investments, and to reform its financial intermediary lending practices to prevent future harm.”

Janine Ferretti, CAO director-general said it will give the IFC nine months to produce a “more detailed assessment of the adverse impacts of the coal-fired power plants on community health and the environment”.

The CAO investigation was launched in response to a landmark complaint filed in 2017 against the IFC by Philippine Movement for Climate Justice (PMCJ), a movement of over 100 groups including indigenous people, fisher folk and farmers to tackle the climate crisis, with focus on the expansion of coal plants.

Development banks should be leading the way to address the climate crisis, but with investments like these, the IFC is taking us backwards.

Normally, the CAO would have organised visits to the communities from 2019 to 2021 to gather information, but travel was not possible due to the pandemic.

PMCJ claimed that despite failing to meet the IFC’s social and environmental performance standards and climate commitments, a local bank, Rizal Commercial Banking Corporation (RCBC), was given US$228 million by the IFC to invest in coal projects.

“Development banks should be leading the way to address the climate crisis, but with investments like these, the IFC is taking us backwards,” said Aaron Pedrosa, PMCJ’s legal counsel.

“Communities in the Philippines are suffering both the direct impacts of living near coal-fired power plants and the devastating effects of climate change. This isn’t the kind of development we want.” 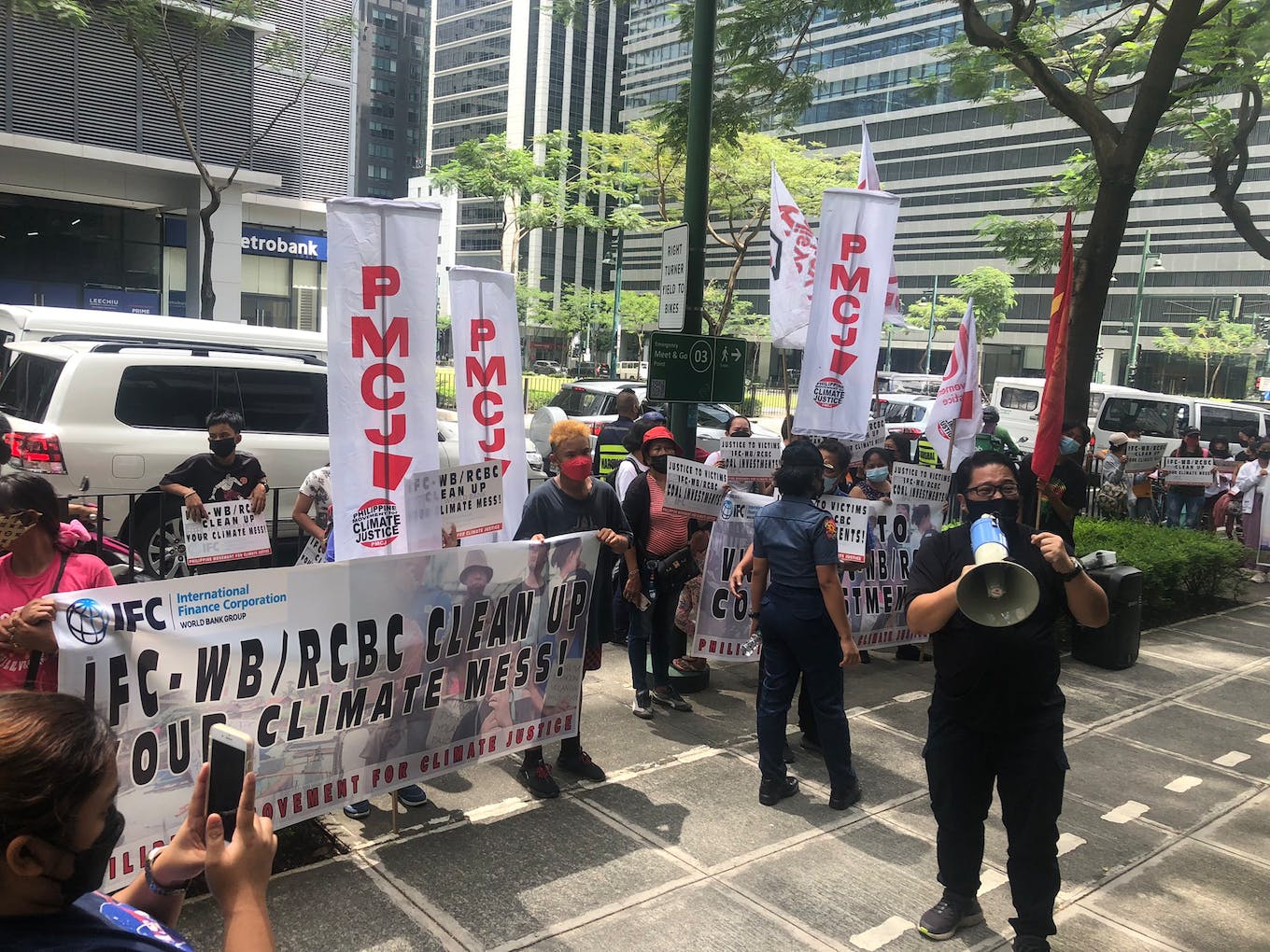 Two days before the COA released the findings of its investigation, protesters held a demonstration in front of the IFC office in Bonifacio Global City in Taguig City on 7 April 2022. They demanded for justice from communities harmed by the IFC’s funding and enabling of coal projects across the country. Image: Philippine Movement for Climate Justice

The IFC, whose funds are pooled from governments all over the world, has financed at least 10 new coal-fired power plants in the country from 2011 to 2019. Areas affected by the plants’ construction and operation include coastal communities in Atimonan, Quezon where lands were allegedly illegally cleared and bodiversity-rich bodies of water were polluted, as well as Lanao del Norte, Mindanao whose locals were displaced and fishing areas were destroyed.

In September 2020, the IFC announced that it would no longer invest in banks that did not have a plan to divest from coal.

The following month, RCBC also said that it would stop financing coal plants. RCBC became the first in the Philippines and only the fourth bank in Southeast Asia to phase out funding for fossil fuel.

The IFC has accepted the CAO’s recommendations, stating that the organisation will “work to support RCBC to make the improvements outlined in CAO’s action plan.”

We draw additional lessons from this case which will guide us as we continue to improve our environmental and social approach to clients from financial institutions.

“In recent years, we have enhanced our environmental and social support to RCBC while also dramatically strengthening our procedures, resources, and guidance to financial sector clients,” said Makhtar Diop, managing director of IFC. “We draw additional lessons from this case which will guide us as we continue to improve our environmental and social approach to clients from financial institutions.”

However, PMCJ’s Pedrosa said in a television interview on Friday that despite the CAO findings, he feared that they may have little effect on the communities surrounding the coal-powered stations.

“It has taken five years and so far no movement has happened on the ground. They are still experiencing the same pollution and the corporations have been treated with impunity. Even our own government has not held them to account,” he said.

Pedrosa asked the World Bank “to ensure reparations for the impacts that the communities are now suffering.”

“We have coal plant sites where leaders have not only been intimidated, but one has even been killed in 2016  for resisting a coal plant project,” he said.

“We have indigenous peoples who have been displaced from their communities. We have air pollution, water pollution in some sites and even a mountain was denuded, consistent with the support provided by RCBC just so the coal plant project would proceed.”

This is not the first time that the IFC has been called out over the impact of its investments. Civil society groups have previously highlighted how the IFC has had financial ties to 41 new coal projects launched since 2013.

These projects include power plants like the Mahan plant in India, the Central Java power station in Indonesia, the Rampal coal plant in Bangladesh, each of which has prompted protests by local residents and activists who fear the projects will cause severe environmental, social and human rights problems.