What does climate change look like through a female lens? This year's Women's Forum Singapore gathered over 700 delegates and speakers in a conversation about gender equality and how women's leadership is crucial to saving the planet.

What would the future look like if more women designed our cities, led the latest tech innovations, and sat on the boards of the world’s major companies?

More sustainable, equitable and inclusive, according to panelists at the 2018 Women’s Forum, held for the first time this year in Singapore.

Taking the stage to discuss innovative solutions to global issues such as climate change and technological disruption, global experts from business, government and civil society underscored the importance of women’s leadership in creating a better world.

“Many things are happening in this part of the world related to climate change, sustainability, and growth. We cannot imagine that this for a second will happen without women in the right place,” said Chiara Corazza, managing director of the Women’s Forum for the Economy and Society. “It’s a question of how innovation can foster leadership in areas where we can add value.”

Key topics discussed over the two-day event included artificial intelligence, smart cities, responsible finance and business. The forum also focused on how education and innovation can help bridge the gender gap in science, technology, engineering and mathematics (STEM)—fields that are essential to shaping the future but continue to be dominated by men.

There are fewer women working in the areas of STEM in Asia than in other parts of the world, with only 22.9 per cent in East Asia and the Pacific and even lower in South and West Asia. The Philippines performs best in the region when it comes to bridging the gender gap, ranking tenth out of 144 countries in the 2017 Global Gender Gap Report. Almost half of science and technology practitioners in the country are women.

“The fundamental aspect within a woman is care and that’s what is necessary for sustainability.

Lavanya Wadgaonkar, head of communications in Asia and Oceania, Nissan

On the topic of women’s inclusion in STEM as part of a panel called ‘Designing a better world,’ Yolyn Ang, director of partnerships in Asia-Pacific at Google, said: “If we don’t participate in this topic, firstly we don’t equip the children of the future and secondly, we will result in a situation where the leadership of companies gets more and more biased.”

She also highlighted a 2017 Korn Ferry Institute study that showed how pursuing an education or career in STEM paved the way for women into positions of leadership. A higher percentage of female CEOs were found to have a background in STEM than in other fields of study.

Having women at the top can help save the earth

Appointing women to lead companies not only serves to facilitate more equality in the workplace—it also leads to stronger environmental protection. A recent study published in the Journal of Corporate Finance revealed that companies with more women on their boards are less often sued for breaching environmental laws. The research revealed that “For every additional woman appointed to a corporate board, the company experienced an average 1.5 per cent reduction in litigation risk.”

On women’s propensity to strive for environmental protection, Lavanya Wadgaonkar, head of communications in Asia and Oceania for Nissan, said: “The fundamental aspect within a woman is care and that’s what is necessary for sustainability. We care for the environment, and when care meets a purpose, that really drives things.”

Echoing Wadagaonkar, Esther An, chief sustainability officer at City Developments Limited (CDL) said: “Women are more concerned about the future of the world. We are more concerned with what we leave behind for our children, so naturally we care about the environment.”

An is also the founder of Women4Green, a network that aims to expand opportunities for women leaders to drive climate action, sustainable business and social change in industries such as green buildings, technology, energy and finance.

Speaking on a panel on designing a sustainable future for ASEAN, she said that CDL is actively engaged in developing climate change scenarios for Singapore and is committed to reducing their her company’s greenhouse gas emissions by close to 60 per cent. An added that even though women play an important role in tackling climate change, “both men and women have to push themselves to meet challenging targets.”

CDL’s Board Sustainability Committee (BSC) is run by a woman, Tan Yee Peng, who also sits on the company’s board of directors. 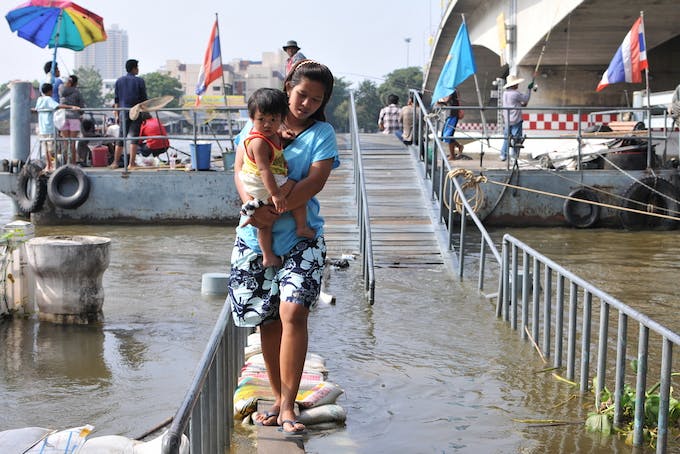 A woman carrying a child through floodwaters in Bangkok, 2011. Women and children are 14 times more likely to die than men during natural disasters. Image: 1000 Words / Shutterstock.com

One major reason why women need to be at the forefront of climate discussions is because they are disproportionately affected by shifting climate patterns, according to Corozza. She said: “Women around the world are more impacted by floods, droughts and the catastrophes that come with climate change.”

Recent research supports her claim. A report on Gender, Climate Change and Health from the World Health Organization reveals that environmental stress and natural disasters take a greater toll on women, especially those most marginalised in society and the economy.

Furthermore, in places with little access to sustainable alternatives, women are more likely seen to be responsible for environmental problems such as deforestation. “They have to cook and use heat to take care of the family and nourish the children. And they can be considered criminal for doing those things,” said Corazza. Excluding women from solutions tied to climate change would therefore be detrimental to both their well-being and the world at large.

Lauren Sorkin, managing director of Asia-pacific at 100 Resilient Cities, highlighted the intersection of women’s empowerment and climate adaptation with an example of a programme in Da Nang, Vietnam. A city prone to major floods and typhoons, Da Nang’s re-building strategy places women on the frontlines of climate resilience by making women organisations in charge of financing and training them to start businesses. In this way, women are given a stake in the sustainable development of their city and are empowered by their ability to support themselves and contribute to its reconstruction.

Corazza believes women’s voices are integral to pushing action on climate change: “There’s no acknowledgment in this world about the disasters related to climate change and it is through women that we can really make an impact.”