Why is Phnom Penh so obsessed with filling lakes?

Phnom Penh developers have a penchant for filling lakes to create space for increasingly grand projects, but the projects could have serious repercussions for sustainable development in the Cambodian capital.

At the start of the year, top national officials released plans to move the streetside fruit and vegetable vendors at Psar Deum Kor, a massive bustling market that supplies much of Phnom Penh’s smaller markets around town, to the city’s northern outskirts.

But to do so, they would have to fill sand into parts of Boeung Tamouk, one of the few lakes in Phnom Penh whose shores remain unchanged, making flood management a growing challenge in the natural wetland.

The city passed out eviction notices by the end of last month, and about 10 families who had been living on state land have already been evicted, according to Soeung Saran, acting executive director of the urban poverty organisation Sahmakum Teang Tnaut.

The reason for the move is most likely to free prime real estate inside Phnom Penh’s first “ring road”, where developments are already locked in. Land is growing increasingly valuable in Phnom Penh, and plots around the northerly Boeung Tamouk are selling for between US$3,000 and $9,999.

At the nexus of the Mekong and Sap rivers, Phnom Penh is endowed with hectares of lakes and wetlands that work as natural drainage systems during the six months of rainy season. Edmond Lo Yat-Man, deputy director of Nanyang Technical University Singapore’s Institute of Catastrophe Risk Management, says projects of this nature require developers to build infrastructure to handle the onset of water, plus the possible impact of water pollution. Otherwise, filling lakes with a “strong eco-system function” run the risk of exacerbating flooding.

Wetlands and urban development monitors say the pace of development is moving too fast for any assessments to keep up, and there are few studies of the impacts of reclamation in Phnom Penh.

This area [of conservation] is kind of empty, but you can’t do much in Phnom Penh, because the wetland is gone.

Before Boeung Tamouk was proposed for land reclamation, the lakes—or “boeung” in Khmer—in the south of the city are shrinking to make way for a high-end satellite city.

Based on its project proposals online, ING City will fill 2,572 hectares of undeveloped land in the south to build a central business district, industrial park and luxury housing. Much of that land was Boeung Tompun, a 2,500 hectare lake that served as a natural drainage site and resource for fishing and farming morning glory.

The company started filling sections of the lake in 2004, with plans to reduce the size of the lake and canal to 520 hectares. It is unclear how much of the lake has been filled. ING Holdings—the development company chaired by three powerful tycoons, Ing Bunhoaw, Lim Bun Sour and Lim Rose—declined multiple requests for comment.

Environment ministry spokesman Neth Pheaktra says the body performed environmental impact assessments for developments on Boeung Tompun and other state-private developments that require land reclamation, but he referred to City Hall for details, which declined to comment. 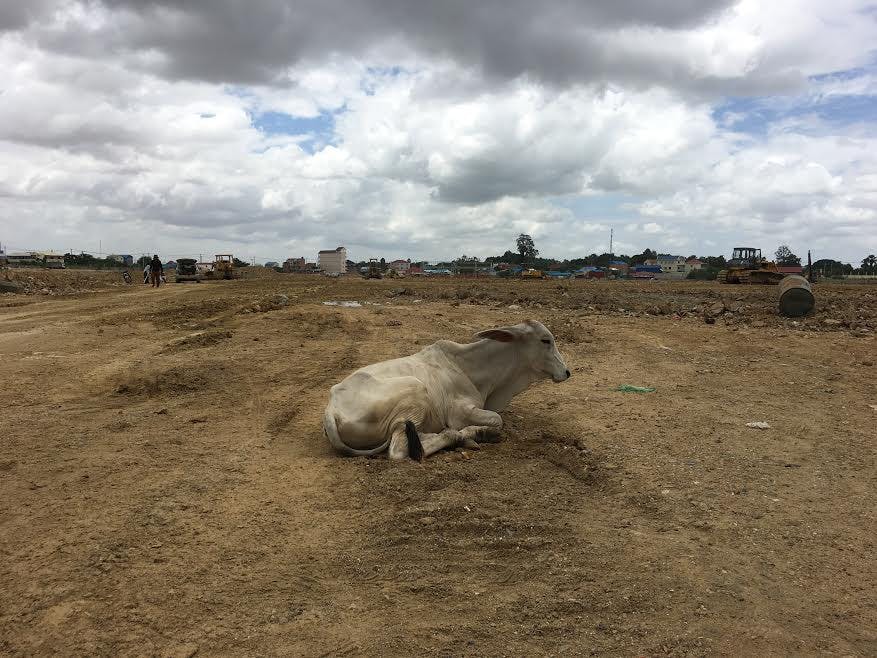 A cow rests on a filled-in lake in central Phnom Penh. Image: Eco-Business

At full capacity, Tompun and neighbouring Boeung Choeung Aek function as natural wastewater treatment sources. But Masoomi says their dramatic reduction, combined with local farmers’ heavy use of pesticides, has prevented the lakes from serving their potential as water cleansers.

In 2015, researchers from Royal University of Phnom Penh speculated that a wastewater treatment plant could be created to replace the natural treatment capacity of Boeung Choeung Ek—another southern lake that had been filled for urbanisation efforts—if it were completely filled. But they estimate it would cost US$2-$5 million in electricity and operating costs, in addition to the cost of construction. Pumping flood water that will inevitably fill that lake basin would cost the city money, but would likely be unable to reduce all flooding, the report notes further.

A drain on resources

Reclamation in the south extends beyond major developments like ING City. When private land developers see a bog or swampland, they might see it as a chance to get central land at a low price. Having scoped out some property on shallow water this month, real estate agent Suong Warng notes that the stretch of land—filled with water-dwelling plants and murky brown water—is close to major upcoming developments but available at a much lower price.

The plot he examined, just a few kilometers from the ING City site, cost a few hundred dollars per hectare, its cost slashed by the water and proximity to a pagoda. But Warng says he can hire a truck to fill with sand for about $250 and sell the plot for a rate closer to the thousands of dollars that ING land sells for.

The developers filling lakes and wetlands are taxing an already strained wastewater drainage system. However, Say Bora, senior program officer with the Japanese International Cooperation Agency (JICA), says the situation has improved significantly since the development agency began funding wastewater treatment and drainage in the 1990s.

But flooding is still a challenge, particularly in the north central Tuol Kork district and near the city’s founding site and landmark, the pagoda and park at Wat Phnom. Rainwater during peak wet season can take several hours to clear, and from June to October citizens share dramatic photos of flooding on social media. In June last year, flash floods hit the city, with water waist deep in some areas.

Further north of the proposed satellite developments, an infamous lake reclamation and evictions of the neighbourhoods on its shore haunt the city’s developments. The northwest corner of Phnom Penh used to house a 90-hectare lake where Mekong floods could drain. Boeung Kak was filled in 2008 after it became state-private land owned primarily by Lao Meng Khin, a senator, business tycoon and confidante of prime minister Hun Sen. After a year of violent evictions and protests, the lakeside backpacker hideouts and low-income homes were replaced with a trim but hollow business district and sparse flatlands waiting further construction.

After the 4,255 families were moved and the lake filled, a few reports criticised the violent evictions, but no study of the environmental impact of the reclaimed land exists. “It’s like the most silent spot in Cambodia that no one’s studied,” says Masoomi.

Whether it’s due to environmental concerns missed in EIAs or bad press, Boeung Kak has proven a difficult development site. Two major foreign partners walked away from deals with Shukaku, the company that owns the land, in 2014, and at the moment, many storefronts in the development sit unoccupied.

Masoomi worries about the impact that Boeung Kak and other filled lakes will have on the city, but he believes wetlands do not have to come at the expense of lost urban development. A wetland preserved by the city, or even created by sustainable developers, can function like a national park or conservation area, drawing in tourists.

With WWT, Masoomi is proposing to develop one of Cambodia’s provincial cities into an urban wetland, where the naturally occurring ponds function as part of the city infrastructure.

With its marshes and strategic spot at the intersection of the Mekong and Sap rivers, Phnom Penh would have been an excellent choice, but between the reclamations at Boeung Kak and Tompun, Masoomi says developments have gone unmonitored for too long.

“Overall this area [of conservation] is kind of empty, but on the other hand you can’t do much in Phnom Penh, because the wetland is gone.”