The UK Met Office has released new maps that outlines how climate change will affect the world in terms of trade, natural disasters, food and water security by 2100.

By the end of the century, Singapore could see almost 445,000 people a year being adversely affected by flooding if no efforts are made to mitigate climate change. The frequency and intensity of flooding events in Southeast Asia is also set to increase by 77 per cent.

But if the world takes rapid and significant action to mitigate greenhouse gas emissions such that they peak in 2040 and then decline, these numbers could be reduced. The number of people in Singapore affected by flooding would plummet from 445,000 to 20. In Southeast Asia, the increase in frequency of flood events would be limited to 51 per cent, and warm day temperatures would only increase by 1.2°C. The projected increase in drought days would also be reduced to 3 per cent.

These findings were revealed in a report on the ‘Human Dynamics of Climate Change’, launched in London on Wednesday by the British Foreign and Commonwealth Office (FCO).

The findings have been consolidated in a comprehensive map which shows the interconnected nature of the impact of climate change. Present day scenarios of trade flows, population density and resource scarcity are presented alongside predicted changes on the map.

In Asia, the factors determining the impact of climate change include high population densities across much of South and Southeast Asia, rapidly growing populations in East Asia, and existing shortages of food and water in the region. 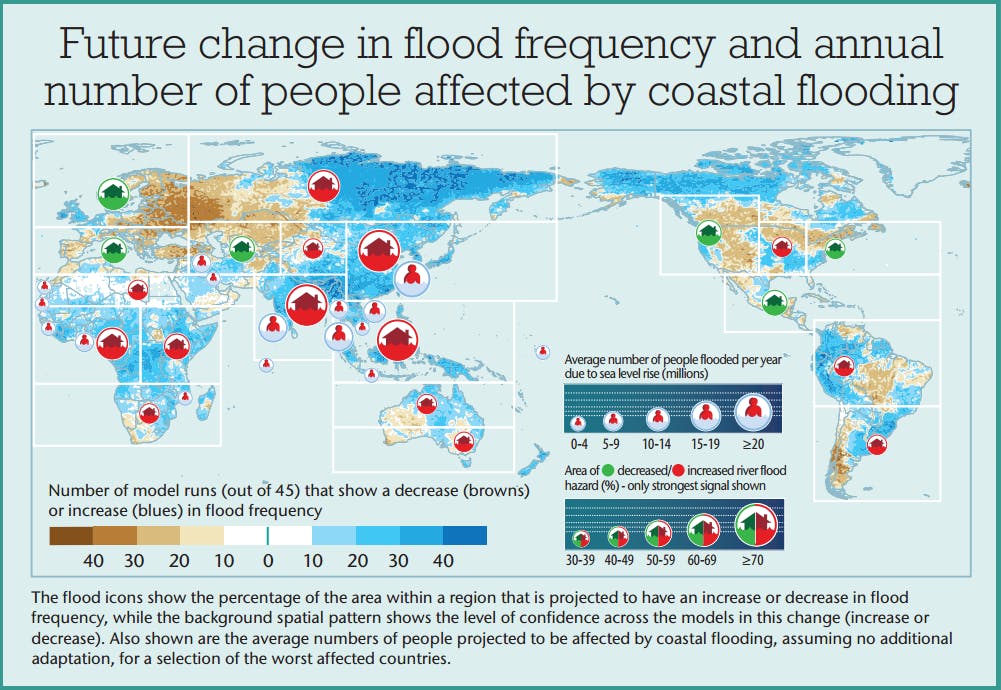 The report predicts a risk in flooding across 70 per cent of Asia. Low-lying coastal areas in South Asia could see up to a 78 per cent increase in river flood hazard and tens of millions of people vulnerable to floods per year. 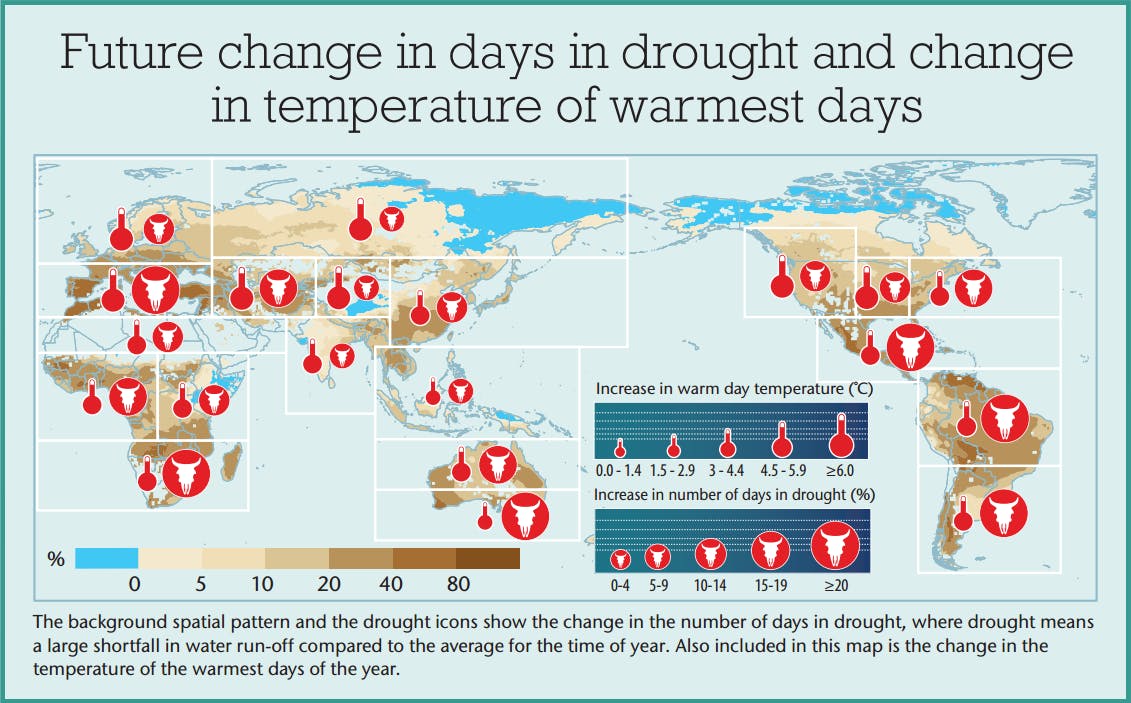 At the same time, the number of days in drought is also set to increase, along with the temperature of warm days. In East Asia, drought days will increase by up to 12 per cent. 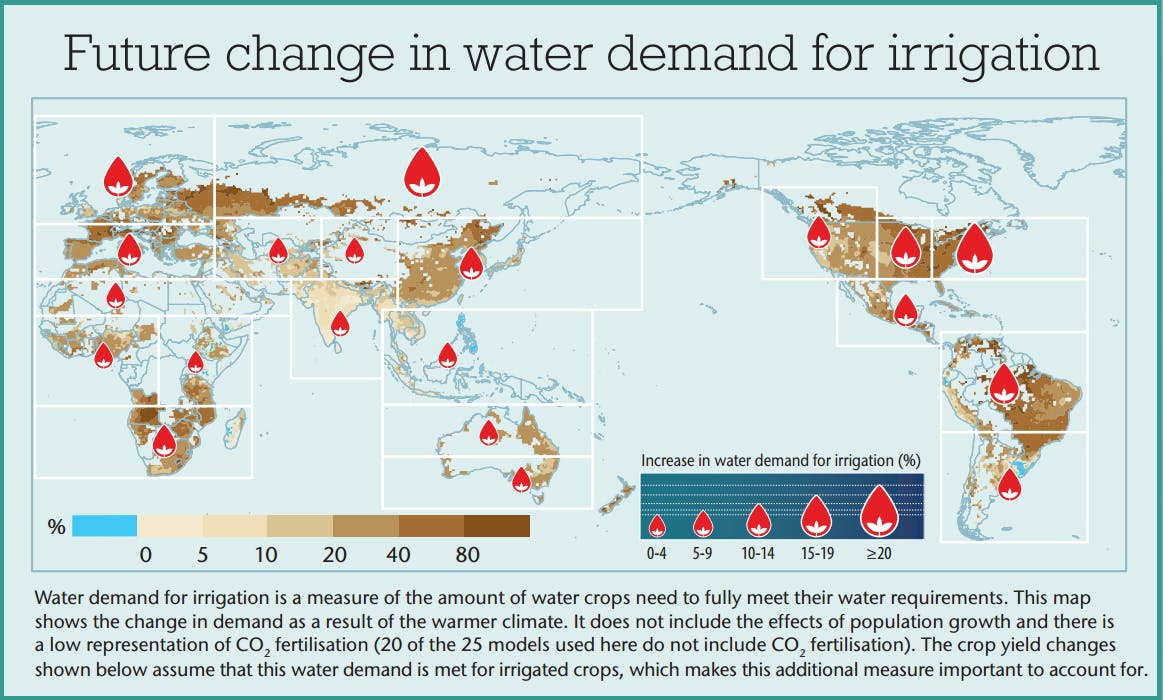 Even as the stress on water in Asia increases due to growing populations and rising global temperatures, demand for water for irrigation will also increase significantly in South Asia, East Asia, and Southeast Asia.
According to the UN Food and Agricultural organisation, this will largely be due to population growth and the dietary preferences of Asia’s growing middle class shifting towards more resource intensive foods such as wheat, rice, and meat. In East Asia, water demand is predicted to increase by up to 24 per cent. 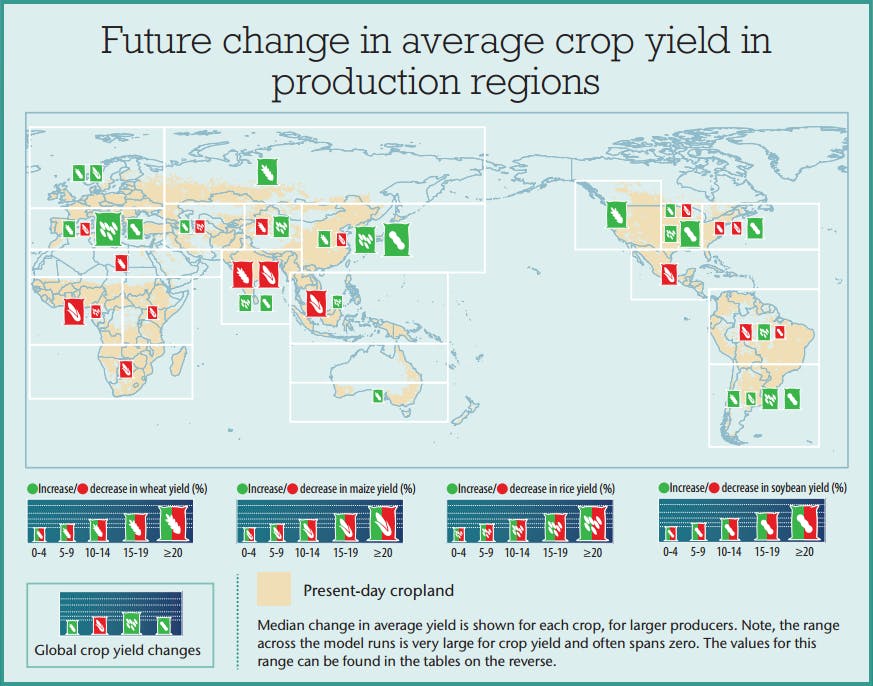 Water stress will be compounded by food stress in the region as well. The production of Wheat and Maize are set to decrease in South Asia and South East Asia, which are major global exporters of these crops. However, rice yields will increase slightly across the region.

Mark Simmonds, Foreign Office minister, said that the map showed “how the impact of climate change on one part of the world will affect countries in other parts of the world, particularly through the global trade in food”.

Simmonds said that this highlighted the global nature of the problem and that “no country is immune, and we all need to work together to reduce the risks to our shared prosperity and security”.

Julia Slingo, Met Office chief scientist, said that the report has used “the latest science to assess how potential changes in our climate will impact people around the world”.

The outlook is bleak, she said, adding that “while we see both positive and negative impacts, the risks vastly outweighed any potential opportunities”.

In addition to the main map, the Met Office also published two additional maps which consolidate all the different types of impact into one diagram. One of these maps presents an alternative scenario of what the Intergovernmental Panel for Climate Change (IPCC) has deemed “aggressive mitigation”, wherein global climate emissions peak by 2040 and then decrease. 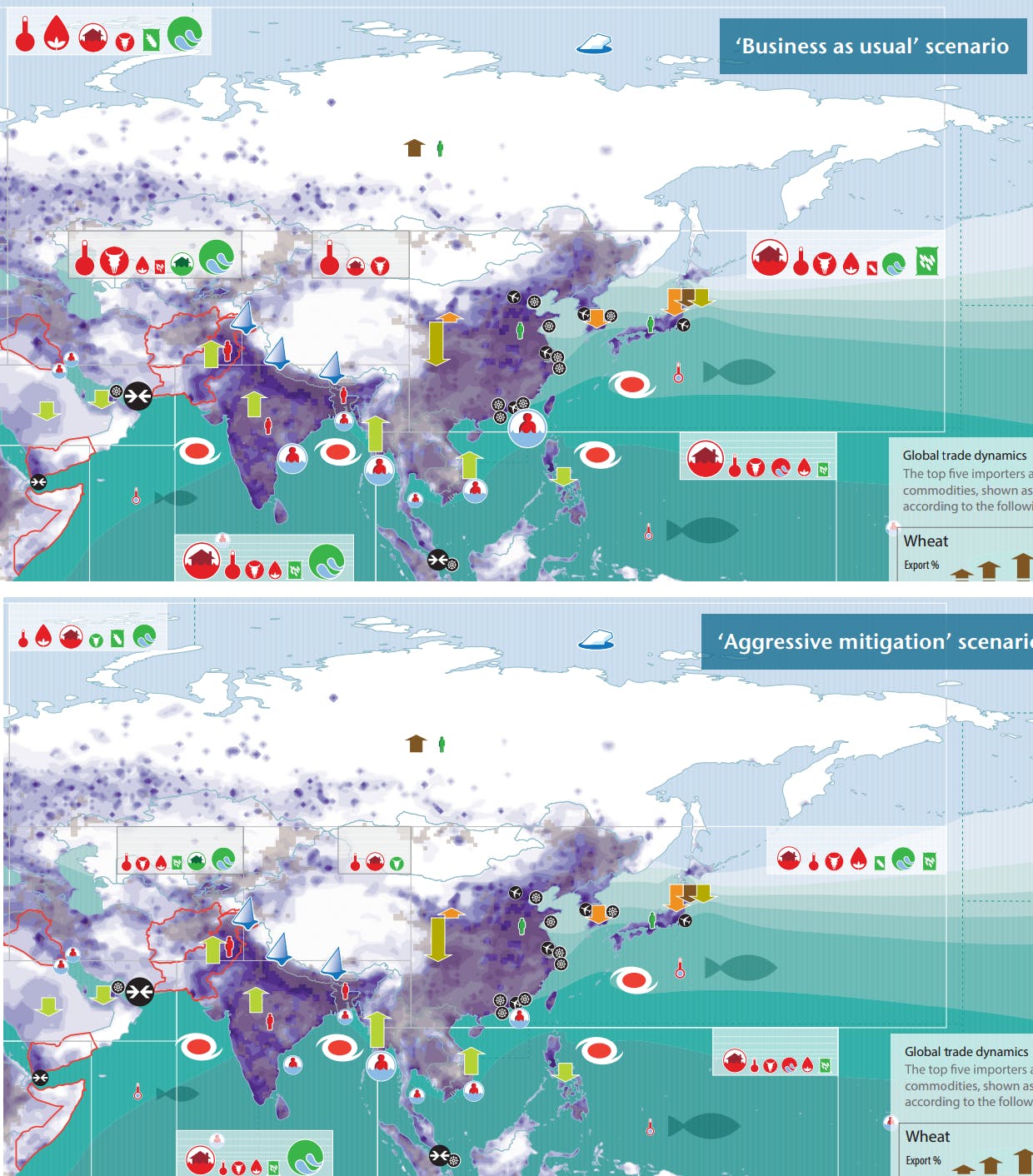 Adverse impacts such as flooding in Asia are visibly reduced if aggressive mitigation measures are undertaken.

The urgent need for mitigating climate change echoes the findings of the IPCC’s recently released fifth assessment report (AR5), which revealed that the emission of greenhouse gas emissions had accelerated despite reduction efforts.

The report cautioned that delaying mitigation efforts would “increase the difficulty and narrow the options for limiting warming to 2°C”. Scientists say that it is necessary for suface temperature increase to stay within this limit if the world is to avoid catastrophic impacts of climate change.