Water budgeting is taking Indian farmers from scarcity to plenty

Bhagavat Ghagare had witnessed much misery due to lack of water in his village of Kumbharwadi in Ahmednagar district, one of the most drought-prone regions of the Maharashtra state on India’s western coast.

Supply from private tankers was never enough, women suffered from back and leg pains for carrying pitchers from far off, children dropped out of school to fetch water, and many families took up manual labour in neighbouring areas because their fields remained fallow for lack of water in the long summer months. “We would take our herds to go live on the floodplains that still had some grass and water left for the cattle,” he recalled.

Today, the village has enough water to grow three crops. No private water tankers are needed, and only a few educated young men emigrate in search of white-collar jobs.

This transformation has taken 10 years, during which time the villagers learned about and adopted ‘water budgeting’, which rests on science and social cooperation to plan and manage water usage. Water budgeting, helped by non-governmental organisations and state government agencies, has also helped farmers in the region deal with increasingly erratic rains in recent years.

The residents have learned to read rain gauges, measure groundwater levels, and employ formulae to calculate how to best use the precious resource. Residents of each village come up with a plan by prioritising drinking water for humans and livestock and then deciding upon a list of crops that can be grown with the remaining water available until the next monsoon season replenishes the water sources. The crucial element, as with any plan for using shared resources, is consensus and cooperation.

By showing that this can be done, Maharashtra’s water budgeting farmers hold up an example for farmers across India, which is projected to experience more frequent and intense heat waves, extreme rainfall events and erratic monsoon rains over the coming decades.

India has implemented a slew of water conservation measures over several decades. Most of this conservation work involves tree plantation, digging of trenches to enhance water infiltration into the ground and prevent soil erosion, and construction of ponds to harvest rainwater. Success has been sporadic and inconsistent, and none of these is a complete solution in itself.

In Kumbharwadi, water conservation efforts first started during the 1998-2002 period, and bore fruit initially. “Noticing more water, we expanded the cultivated area, started growing sugarcane and other water-intensive crops, increased the number of livestock and ventured into the dairy business,” said Ghagare. “But it lasted only seven years. That is when we realised that there is a limit to how much water we can use.” Farmers in many parts of India are growing commercial crops, unsuitable to the hydrological profile of their regions by digging deeper into aquifers. Maharashtra state’s sugarcane cultivation, for instance, consumes 70 per cent of the total water used for irrigation. It takes 2,100 litres of water to produce a kilogram of sugar in Maharashtra against 822 litres in Bihar, an eastern state with wetter climate. Water budgeting helps highlight such follies.

A village-level committee was constituted and farmers were divided into three clusters to supervise each other’s practices. Over numerous training sessions, experts helped the villagers understand the water cycle, the geology of the region, the recharge areas, how much rainwater percolates into the ground, what is runoff, and so on. Further, the villagers learned how to measure the yield of a well, the water requirements of humans and animals, the irrigation requirements of each crop and the use of water-saving equipment such as sprinklers and drip irrigation systems, said Dr Eshwer Kale, thematic lead for water policy and governance at the WOTR Centre for Resilience Studies (W-CReS). 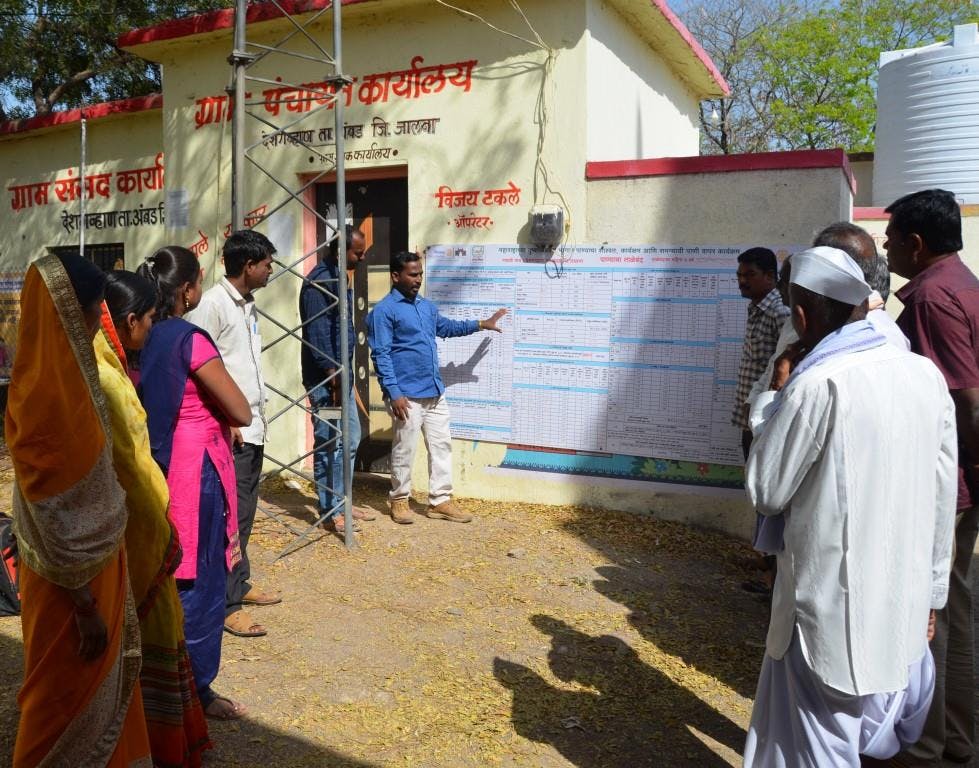 A training session for farmers to learn about water management and budgeting. IMAGE: WOTR

Today, hardly anyone in Kumbharwadi practices surface or flood irrigation, the conventional but inefficient method that involves flooding the field with water. “Drip and sprinkler systems have not only reduced water use but also cut input costs and increased crop yields,” said Ghagare. The details about rainfall, availability of surface water and monthly groundwater measurements are displayed at the panchayat office. The list of crops to be sown is decided during a meeting of the village general assembly.

The farmers are also growing crops more suitable to the hydrological profile of their area. “Around 40 per cent of farmers in our area have shifted to sericulture from sugarcane. Silk fetches a good market rate, like sugarcane, but is not as water intensive,” said Uma Aslekar, executive director with the Advanced Center for Water Resources Development and Management, a non-profit organisation which has guided over 111 villages in water budgeting. “We believe that people can decide the best for themselves when equipped with sound knowledge.”

Similarly, farmers at Randullabad village of Satara district in Maharashtra used to grow only four to six types of crops. They were also supplying water-intensive potatoes to manufacturers of potato chips. With water budgeting, up to 17 different types of crops flourish in the same fields depending on the season and water availability. Potatoes are still grown but only during the monsoon.

In India, groundwater is usually considered a private resource of the person on whose land a well or borewell is located. This gives rich farmers with vast land ownership and deep pockets to dig borewells a first-mover advantage in this race to the bottom of aquifers. Water budgeting, on the other hand, makes villagers aware that the underground aquifer is a common resource that everyone has an equal right over.

One key and fundamental regulations in the villages practicing water budgeting is related to new borewells. Some villages have banned the sinking of new borewells while others have restricted the depth of borewells to 100 feet. “We don’t allow any new borewell because even if one person starts mining more water, all of us suffer,” said Dr Prajakta Jagtap, a former sarpanch of Randullabad. “Anyone requiring additional water petitions the village committee, which can allocate the resource from the common well if it considers the need to be reasonable.” 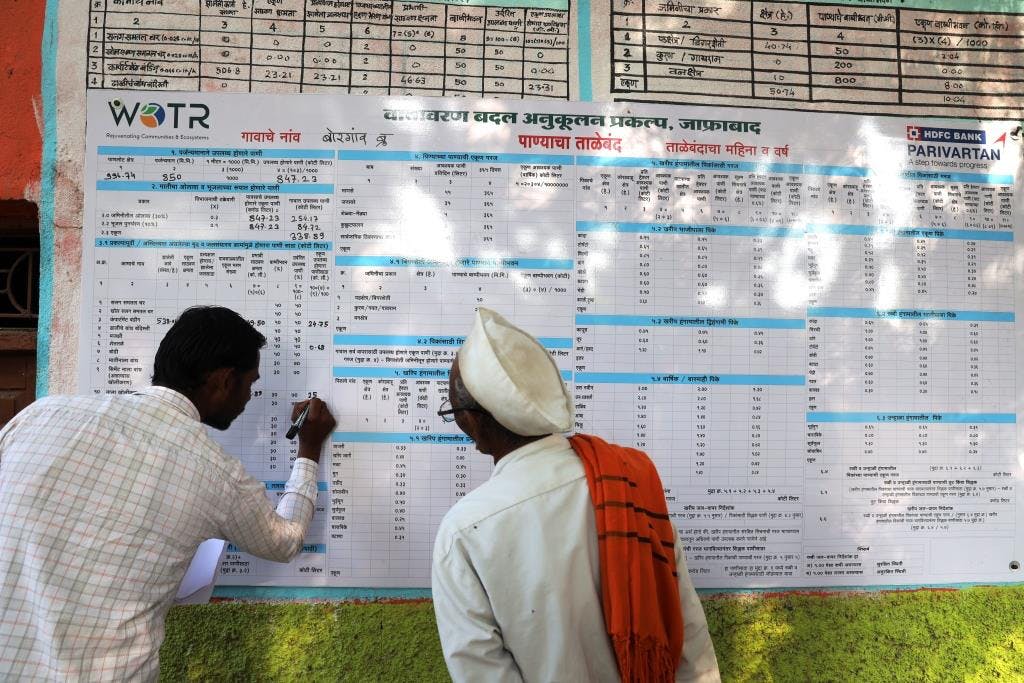 The success of water budgeting has inspired many villages to adopt the concept. WOTR has expanded its work to around 270 villages in Maharashtra and the neighbouring states of Telangana and Madhya Pradesh. The Maharashtra state government has enacted water budgeting into a law, mandating the preparation of watershed or aquifer based groundwater use plans based on water budgets of an area. It also puts the onus on farmers to maintain the water budgets of their respective villages if they grow water-intensive crops. A national-level, World Bank-funded groundwater management project, launched in 2019, also includes a component on water budgeting at the village council level.

The system does not operate smoothly at all times. For instance, one farmer installed a borewell on his farm in Randullabad while flouting all rules. “He did this in March-April, when the water shortage is most acute. This impacted the neighbouring farmers because the water in their dug-wells receded,” said Ganpat Jagtap, a member of the village development committee. A dug well is a traditional well that gets water from shallow aquifers compared to borewells that are drilled much deeper. “The owner’s own dug-well also showed reduction in water after the borewell became operational,” Jagtap said, adding, “A dug well gives consistent water supply for 2-3 hours while borewell in our area yields water only for 15-20 minutes at a time. This made the person realise his mistake and he agreed to not use the borewell.”

Problems also crop up at the village level, as not all villages respond enthusiastically to such interventions. Those located closer to cities, having weak social bonds or deep political fissures tend to perform poorly.

For instance, a water budgeting project in the southern, peninsular state of Andhra Pradesh saw mixed results. Three years after funding for one such project ended, only 32.7 per cent of surveyed habitations continued to practice crop water budgeting, found a study by the International Water Management Institute. At places where the system still worked, farmers had either organised themselves into cooperative credit societies or had continued commitment from civil society groups even after the project period.

“One thing we focus on during our work is training of local resource persons in the villages because even after we leave, there should be someone to keep the system working,” said Aslekar. “Today, around 25 of these resource persons are sarpanches of their villages and water budgeting has got embedded into their governance models.”

Another thing common among successful villages is the small size of landholdings. Farmers who own up to 2-3 acres and share dug-wells already have a system of cooperation. In Randullabad, most people belong to one caste and hence the society is homogeneous, but Kumbharwadi has a mix of caste groups besides Muslims and families belonging to indigenous tribes. “Eventually, villagers must realise that more than caste or religious groupings, it’s the dire need for sustainable sources of water that binds us,” said Ghagare, “Nothing else matters.”