Professor Gatze Lettinga, the 2009 winner of the Lee Kuan Yew Water Prize, has spent the past four decades addressing what he thinks are the world’s most pressing issues – social ills and injustice. Water pollution is one of them.

Professor Gatze Lettinga, 79, stands out even in a field crowded with smart people toiling to make the world a better place. Over the course of his four decades-long career, he has worked tirelessly to develop practical technologies for environmental protection.

Perhaps best known for his groundbreaking work on the treatment of used water using anaerobic technology, Prof Lettinga fiercely believes that the purpose of all work – in all fields of human endeavour – is to cure the world of social ills, or what he calls “ugly things”.

This is the philosophy that has been guiding his work on environmental protection, which began when he was pursuing his MSc degree at Delft University of Technology around 1960.

“My work there opened my eyes to the importance of environmental protection and it fitted with the idea I had from my early childhood that ugly things prevailing in our societies like social insecurity, exploitation of people, injustice, and inequity need to be eliminated,” he tells Eco-Business in a recent interview.

He chose to study chemical engineering at the Delft University of Technology in 1954, where he specialised in potable water treatment and operations because he had “affection” for chemistry and for solving practical problems.

As he tells it, awareness of environmental and water pollution in his home country the Netherlands was pretty low until the 1960s.

Surface water pollution – the pollution of rain that collects in water bodies such as lakes, oceans and streams - was not something that people worried about; in fact, it was viewed by many as a sign of a booming economy.

“That was the post-war period, when everyone was looking for promising routes to a better world. That is, a flourishing economy, expanding industrial activities, achieving self-sufficiency in food production, and we were busy with restoring the damages of the Second World War,” he says.

“Environment was in a bad way”

This dismissive attitude towards the environment changed when the global think tank Club of Rome published its ‘Limits to Growth’ report in 1972, in which it predicted that global economic expansion could not continue indefinitely because of the limited availability of natural resources, particularly oil.

The report has sold more 30 million copies worldwide to date and is today still one of the seminal texts of the environmental movement.

Surface water pollution – the pollution of rain that collects in water bodies such as lakes, oceans and streams - was not something that people worried about; in fact, it was viewed by many as a sign of a booming economy.

“This wiped out any doubts by naysayers that the environment was in a bad way,” he says.

The timing of the publication coincided with the completion of his doctoral studies on radioactivity and water supplies at the Department of Chemical Engineering at the Technical University Delft and at the Inter University Reactor Institute, Delft.

While he was already beginning to think about environmental sustainability when he was a master and doctoral student, the notion of sustainability really began to guide his work when he observed that Dutch policy-making was completely “unacceptable”, particularly in the domains of drinking water supply and nuclear energy.

“In the meantime, the rest of us were aware of the enormous risks of nuclear energy production, knowing that just a few disasters will be enough to contaminate huge areas heavily and almost irreversibly with various types of radioactive elements,” he adds.

He accepted his next job – at the water treatment department of Wageningen University where he was associate professor – because he felt he had the freedom to pursue his ideas there, thanks to available funding, a wide network and the right facilities.

He eventually rose through the ranks to Professor in Environmental Technology in 1988.

In his first weeks at Wageningen in the early 70s, he stumbled upon Stanford University academic Perry McCarty’s publications that dealt with the enormous potential of anaerobic wastewater treatment.

This technology is invaluable not merely for treating wastewater efficiently; it was also excellent in recovering resources from the treatment process. 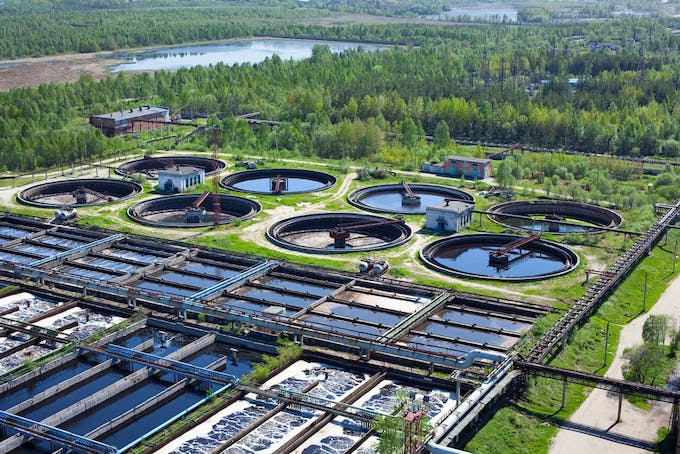 The significant cost savings and superiority of anaerobic technology have also led to rapid adoption in municipal use worldwide. It also produces renewable energy, fertilisers and soil conditioners. Image: Shutterstock

At the time, the more conventional method was aerobic water treatment, which treated sewage and wastewater by adding oxygen to the water.

It uses naturally occurring bacteria to break down the waste and produce a higher quality effluent that may then be treated with chlorine to remove the remaining bacteria.

Anaerobic treatment does the same in an oxygen-free environment, which makes it a simpler system, compared to the aerobic process, and generates energy savings of 30 to 40 per cent.

At the same time, gases such as methane, which can be reused as fuel, is produced as a by-product.

In 1972, shortly after he finished his PhD, he started work on the technology at a time when the Netherlands was hungry for low-cost water treatment methods.

Thanks to substantial financial aid from the Dutch government and years of dogged research, in 1976, he succeeded in implementing the Upflow Anaerobic Sludge Bed Reactor system (UASB) in the sugar beet industry for the treatment of wastewater.

The system moved from lab to the marketplace in just four years. In most cases, it typically takes 10 years or more. This meant that the efficient, cost-saving technology was made available for large-scale use very quickly.

While anaerobic digestion is a naturally occurring process in some soils and water basin sediments and the technology has existed for decades, Prof Lettinga made a breakthrough with his invention by proving that the technology could be operated as a highly effective method to treat industrial-strength wastewater.

This breakthrough extended the applications to a wider range of industries and settings such as breweries, beverage, paper and pulp manufacturing, sugar, starch and alcohol distilleries, whose wastewater contains a large amount of contaminants.

The significant cost savings and superiority of anaerobic technology have also led to rapid adoption in municipal use worldwide. It also produces renewable energy, fertilisers and soil conditioners.

Prof Lettinga did not patent his invention as he believed that technologies that benefit humankind should be made freely available to all. The core technology is still patent-free to this day.

For his research and development of an environmentally-sound process for the treatment of polluted wastewater, Professor Lettinga has become globally recognized.

He has been honoured with a number of awards beginning in 1979 with the NVA - prize of the Netherlands Association for Water Management.

In 1981, he was awarded the Medaille d’argent de la Ville de Paris and in 1992 the Karl Imhoff Award of the International Association of Water Pollution Research Control (IAWPRC).

He was also a recipient of the Royal Shell prize for Sustainable Development and Energy in 2001.

In my first meeting with Mr Lee Kuan Yew, he clearly was interested in the sustainability of our solution, likely because it is a rather different idea compared to Singapore’s high tech approaches.

Today, almost 3,000 anaerobic sludge reactors in operation constitute about 80 per cent of all anaerobic used water treatment systems in the world.

With energy-efficiency concerns becoming more critical, this technology is being increasingly applied not just to treat industrial used water, but also to treat municipal used water in countries like Brazil and India.

Prof Lettinga remained a professor of Environmental Technology until his retirement from Wageningen Agricultural University in 2001. He remains an active Board member with the Lettinga Associates Foundation, a not-for-profit knowledge centre that develops and implements sustainable environmental protection technologies.

In early 2009, when he was told that he beat 39 other nominations from 19 countries to win the second Lee Kuan Yew Water Prize, it took him by surprise. “It was completely unexpected,” he says.

Established by Singapore to be the ‘crown jewel’ of the Singapore International Water Week – a biennial event on the latest in global water innovations - the Lee Kuan Yew Water Prize is named after Singapore’s first Prime Minister whose contributions helped put the country on the path of water sustainability.

One thing that distinguishes Singapore, says Prof Lettinga, is the “impressive” solutions that the country has adopted to resolve its huge pollution and poverty-related problems in the 1970s, under the leadership of Lee Kuan Yew.

Mr Lee, who died aged 91 on March 23 from severe pneumonia, believed that economic progress need not come at the expense of the environment and that a good living environment is in fact an advantage, not a liability.

“In my first meeting with Mr Lee Kuan Yew, he clearly was interested in the sustainability of our solution, likely because it is a rather different idea compared to Singapore’s high tech approaches,” Prof Lettinga says.

Today, Prof Lettinga continues to work with students through his foundation and to think about ways to improve environmental sustainability.

“I’m focused on telling the public that our environment needs to be protected from pollution by applying closed-loop solutions which focus on resource conservation and well-being of humans, wherever and whenever they live,” he explains.

The biggest obstacle to that is the self-interest of “powerful established institutions, companies, consultants and scientists” who continue pushing their own non-sustainable systems and continue obstructing the implementation of any innovative sustainable alternative, he says.

“Therefore in the frame of our foundation, I continue making efforts to convince people, authorities, companies, consultants to apply the sustainable systems we have in mind,” he says. “It’s essential that we humans understand it, no?”