A tropical forest will typically take around 60 years to fully recover from a single logging event. But logged forests in Malaysia that were actively restored showed that recovery can be shortened to 40 years.

Restoring tropical forests through tree planting and selective plant removal can rapidly increase the speed at which they recover from logging, a new study says.

The research, published in Science, finds that logged tropical forests in Malaysia that were actively restored increased their ability to absorb carbon 50 per cent faster than logged forests that were left to regenerate naturally.

Without any intervention, a tropical forest will typically take around 60 years to fully recover from a single logging event, the study estimates. With active restoration, this can be shortened to 40 years.

The findings “clearly demonstrate the value in protecting previously logged forests with respect to carbon storage, as well as for maintaining other ecosystem services and biodiversity”, the study’s lead author tells Carbon Brief.

Around one-quarter of all of the carbon stored on land can be found in tropical forests.

But rampant deforestation is causing this carbon to be released into the atmosphere. Tropical deforestation currently accounts for around 8 per cent of all human-caused CO2 emissions.

Avoiding further deforestation and recovering lost forest will be key to meeting the world’s aim of keeping global warming to well below 2C above pre-industrial levels. That’s according to a major report on climate change and land released by the Intergovernmental Panel on Climate Change (IPCC) in 2019.

The new research looks into how humans could boost the recovery of degraded forests through active restoration. It was conducted in Sabah, Malaysia – a state on the island of Borneo that is a matrix of pristine, degraded and recovering tropical forest.

The findings show that actively restoring forest through tree planting and selective plant removal can double the speed at which it recovers from logging, explains study lead author Dr Christopher Philipson, a forest ecologist from ETH Zurich, Switzerland and the University of Dundee, Scotland. He tells Carbon Brief:

Areas that have undergone active restoration recovered 50 per cent faster. If we assumed recovery to be linear, this result suggests that the reduction in carbon associated with a single logging event would be recovered to the same level as unlogged forest after 40 years with active restoration, as opposed to around 60 years if left to regenerate naturally.

All of these forest plots were logged once at some point between 1972 and 1993. (Logging involves the cutting down of trees for timber production.)

From 1993 to 2004, restoration work was carried out in 35 per cent of the plots. This involved the manual removal of climbing plants and the planting of seedlings of native tree species. (The seedlings were grown in a nursery for four to eight months prior to planting.) Study author Dr Glen Reynolds, director of the South East Asia Rainforest Research Programme (SEARRP), says:

The restoration work involved cutting climbing plants that compete with young trees for access to light and nutrients and planting tree seedlings of important timber species.

After this, researchers returned to the restoration sites up to four times a year to manually remove plants that might prevent the growing trees from receiving sunlight. They also applied fertilisers to each tree.

In the following years, the researchers returned to the plots undergoing restoration and those that had been left untouched to take tree thickness measurements. These measurements gave a picture of how much carbon is being taken up by each forest plot.

To validate their measurements, the researchers also used estimates of above-ground carbon taken by satellites.

The findings show that forest plots that had been actively restored recovered 50 per cent faster than those that had been left to regenerate naturally.

During the 30 to 35 years after logging, the naturally regenerating forests absorbed carbon at a rate of 2.9 tonnes per hectare per year, the study finds.

In contrast, the forests that had been actively restored absorbed carbon at a rate of 4.4 tonnes per hectare.

The map below (left) shows the density of carbon stored in the naturally regenerating (circled in red), actively restored (blue) forest plots and in forest that had not been disturbed by logging (green). On the map, orange and yellow indicates high carbon density, whereas purple to black indicates lower carbon density.

The plots (right) shows the distribution of carbon in naturally regenerating (left) and actively restored (middle) plots, in comparison to forest that had not been disturbed by logging (right). 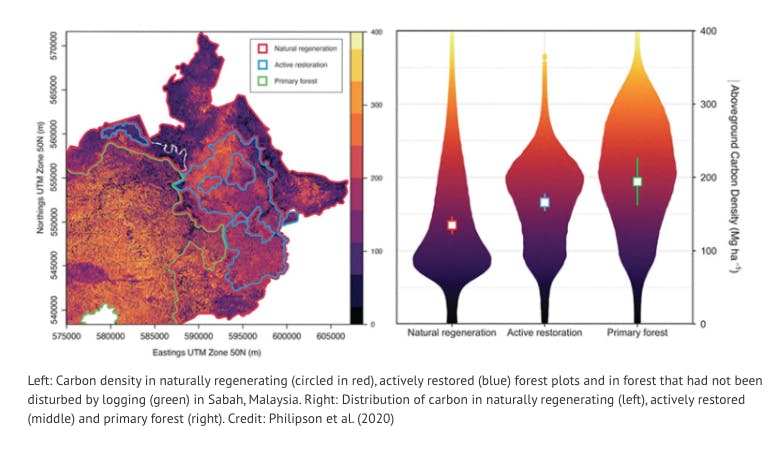 The map shows how carbon density is highest in forested areas that had not been subjected to logging. However, forests that had been actively restored more closely resemble this primary forest than forest that had been left to recovery naturally.

The plots on the right mirror this finding. They show that the actively restored forest plots had a higher proportion of carbon-dense areas, when compared to forests that had been left to regenerate naturally.

The findings show that restoration can effectively boost carbon storage in degraded tropical forests – which are often at risk of being converted to agricultural land due to the perceived low value, Philpson says.

However, this type of conservation is costly, he adds. Restoring one hectare of degraded forest in Sabah costs around $1,500-2,500, the authors estimate.

The analysis notes that funds for restoration could be raised through carbon offsetting schemes – projects that allow individuals or companies to invest in projects that reduce greenhouse gas emissions in order to “balance out” their polluting activities.

However, in the majority of these schemes, the cost of buying emissions offsets is currently too low to raise enough funds to incentivise restoration projects of a similar scale to the one carried out in the study, the authors say.

To fund such restoration projects, the price of offsetting one tonne of CO2 equivalent would need to be between two to 10 times higher than at present in voluntary carbon offsetting schemes, the analysis finds.

At present, it costs around $2-10 to offset one tonne of CO2e in voluntary carbon offsetting schemes, according to the research. In order to fund similar forest restoration projects, it would need to be raised to at least £40-80 per tonne, the researchers estimate. Study author Prof David Burslem, a researcher at the University of Aberdeen, says:

“The costs associated with the most intensive forms of active restoration, if to be recovered through [carbon offsets], require a higher carbon price than has been seen in recent times.

However, varying the type and intensity of restoration treatments according to the residual amount of carbon in the forest stand has the potential to reduce net costs and bridge the gap to financial sustainability, thus enabling much larger areas of forest to be restored.”