Everyone loves a luxury vacation or a fancy hotel buffet, but how are hospitality companies contributing to the global food waste problem? This World Food Day, Eco-Business finds out.

What if every time you sat down for a meal, you threw one-quarter of it in the trash?

That’s the hidden story of waste in the hospitality industry, where an eagerness to please customers has turned into an unseen food scandal.

About 25 per cent of all food that passes through hotel kitchens is thrown out as food waste, and for every diner the hotel serves, about 350 grams is binned, according industry experts Eco-Business spoke to.

Multiply 350g by the hundreds of thousands of hotels and hundreds of rooms, and the figure adds up. For instance, French hotel giant AccorHotels reports that food-related waste makes up half of all trash generated on its properties, though the amount of waste varies according to the type of hotel.

Luxury hotels under its Sofitel and Pullman brands, for instance, churn out 47 tonnes of food waste annually, while mid-range names such as Mercure and Novotel throw away 35 tonnes a year. Economy hotels such as Ibis only produce half that figure, at 17 tonnes a year.

But the waste footprint of a hotel could be much higher depending on its size and the number of food and beverage (F&B) outlets on site, says Benjamin Lephilibert, managing director of hotel food waste consultancy Lightblue Consulting.

“On average we’ve seen hotels waste 35 per cent of all food purchased, with some exceptions like a remote luxury resort in the Maldives, where the figure reaches a stunning 42 per cent,” he says.

The issue of food waste is especially pertinent in the Asia Pacific region, which is home to major food-exporting countries such as the Philippines and China, and is also where most of the world’s 800 million hungry people live.

It is also the new frontier for the hotel industry as economies such as Myanmar open to tourism. The number of rooms in certain Asian cities could grow as much as 30 per cent in the next few years, according to real estate firm JLL.

But increasing consumer awareness around sustainable travel means customers are showing a preference for hotels that can prove their environmental credentials—65 per cent of travellers, to be more precise, reports a study by travel booking portal Booking.com.

Eat till you drop

Pointing out that buffets are more popular in Asia than in Europe, he says: “In Singapore for example, we love buffets, but we want buffets that look like there’s a lot of food there, and most of this will go to the bin.”

“Some food will be reused [through donations or as raw materials for other dishes], but that’s still overproduction.” 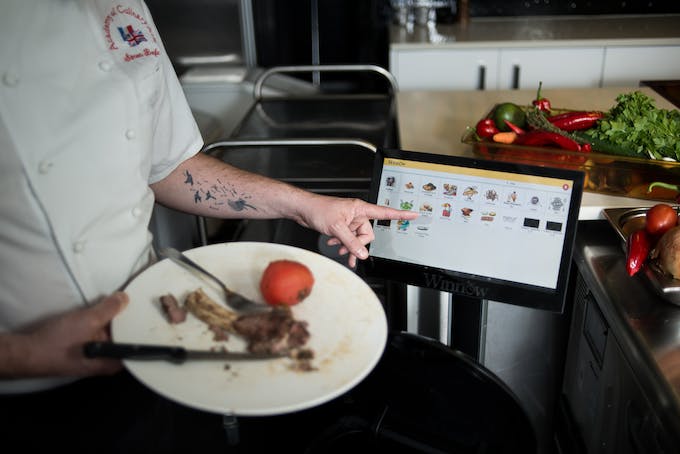 The dinner buffet at Edge, the all-day dining restaurant at Pan Pacific Singapore, is refreshed every two hours to cater to the continuous stream of customers.

Singapore’s National Environment Agency regulations stipulate that food cannot be kept on hold for more than four hours at a certain temperature, says Michele Greggio, executive chef of Pan Pacific Singapore. “But to be safer and ensure we are providing the freshest food possible, we have a two-hour standard, which is in the middle of service.”

The most popular of the hotel’s eight eateries, the Edge restaurant—together with the hotel’s staff canteen—generates 400kg of food waste every month.

Greggio says that chefs at the hotel prepare the amount of food to be served during each meal based on the expected number of guests, which is inferred from reservations and registrations. Kitchen staff also record the amount of leftovers to better anticipate future demand.

However, buffets are good for feeding a large group of people at the same time, though the downside is the amount of food that ends up in the trash, notes Lucas Glanville, director of culinary operations at the Grand Hyatt Singapore.

His guiding principle to running a buffet is to do as one would at home: cooking right when the food is needed. The equivalent in a hotel restaurant setting is cooking dishes at live stations upon request, or a la minute.

“If you go to any of our restaurants, you’ll see small portions of food cooked to order,” he tells Eco-Business.

The five-star hotel has cut its food waste output from 1000kg two years ago to 800kg today by monitoring its waste generation, communicating with staff, and ensuring proper food storage.

By slashing its food waste, the hotel reports that it has achieved S$100,000 in savings per year.

Lightblue Consulting’s Lephilibert says that reducing food waste can result in a reduction of between 3 and 5 per cent in annual food purchasing costs. This in turn translates into savings of US$50,000 (S$67,603) for small three-star hotels serving 15,000-20,000 covers per month, to over US$300,000 (S$405,623) in international brand five-star properties.

One major issue in tackling hotel food waste is to get hotel employees to see the value of the food they are tossing out, says Winnow’s Pourrat, adding that people are quite good about reducing their waste once they have the data.

The company installs weighing scales and software in restaurant kitchens; hotel staff can then use these to weigh and record the amount and type of food they are throwing away, and the software displays the corresponding carbon emissions and cost price of the food. The data is collected and eventually sent to the hotel’s managers or chefs.

“What gets measured, gets managed. That’s why there’s a reduction in food waste,” he adds.

After trialling Winnow’s solution, AccorHotels this year announced a goal to reduce food waste by 30 per cent across its international portfolio of 4,200 properties by 2020, says Lynn Lee, sustainable development and communications director, Asia Pacific, AccorHotels.

“The results from our pilot programme with Winnow reflected that the food waste reduction had been more than 30 per cent, therefore the group felt that an average reduction of 30 per cent is achievable,” Lee says.

AccorHotels this year began offering its hotels a choice between adopting Winnow’s software-based monitoring system and an in-house programme for properties that are more advanced in the food waste reduction journey, launched in July. 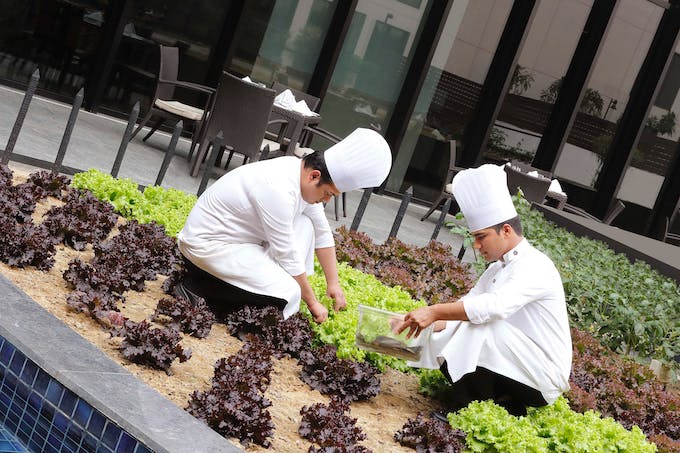 The hotel group has also committed to installing 1,000 urban vegetable gardens by 2020, like the one at the Pullman and Novotel hotels in New Delhi Aerocity.

Another way to repurpose food waste are biodigesters; these are machines that convert food scraps and leftovers into fertilisers or organic wastewater that can be discharged harmlessly into the sewage system.

Hyatt already has a digester and uses its byproducts in its rooftop vegetable garden, while Pan Pacific Singapore plans to install one in the first quarter of 2018.

Biodigesters are the fourth best option according to the US Environmental Protection Agency’s Food Recovery Hierarchy, but have the benefit of reducing the overall carbon footprint associated with transport and disposal”, says Lephilibert. A better option is donate food that is still edible to local charities, he adds.

Grand Hyatt’s Glanville says, when asked what his advice was for hotels still on the fence about food waste: “Make a decision—are you part of the problem or the solution?”

“As an industry, it’s not just about producing delicious food and having amazing service. Just as we’re accountable for producing an enjoyable experience for guests, we’re also accountable for what happens afterwards.”