The price of polluting is soaring: report

The cost of emitting greenhouse gas carbon dioxide skyrocketed in 2021 in all major emissions trading systems, according to Refinitiv’s carbon market report.

The value of traded global markets for carbon dioxide (CO2) permits grew by 164 per cent to a record US$851 billion last year, according to analysis by Refinitiv, a financial markets data provider. Higher volumes and skyrocketing prices underpinned the growth.

Carbon markets are designed to put a cost on carbon dioxide for some of the most highly polluting industries. Carbon pricing usually takes the form of taxes on polluters’ emissions or “cap-and-trade” emissions trading systems (ETS) that limit how much companies can emit before having to pay more.

The European Union’s Emissions Trading System (EU ETS), which launched in 2005 and is the most established carbon market, is driving growth. Prices have surged there—climbing to over US$90 a tonne by the end of 2021, more than double the previous year. The bloc accounted for 90 per cent of global value at US$728 million, the annual Refinitiv Carbon Market Year in Review showed.

“High prices are fundamentally a sign that the market is pricing in the cost of transition to a greener economy. It shows confidence in climate targets and in emission trading systems as tools to meet them,” said Anders Nordeng, senior analyst at Refinitiv and report co-author. 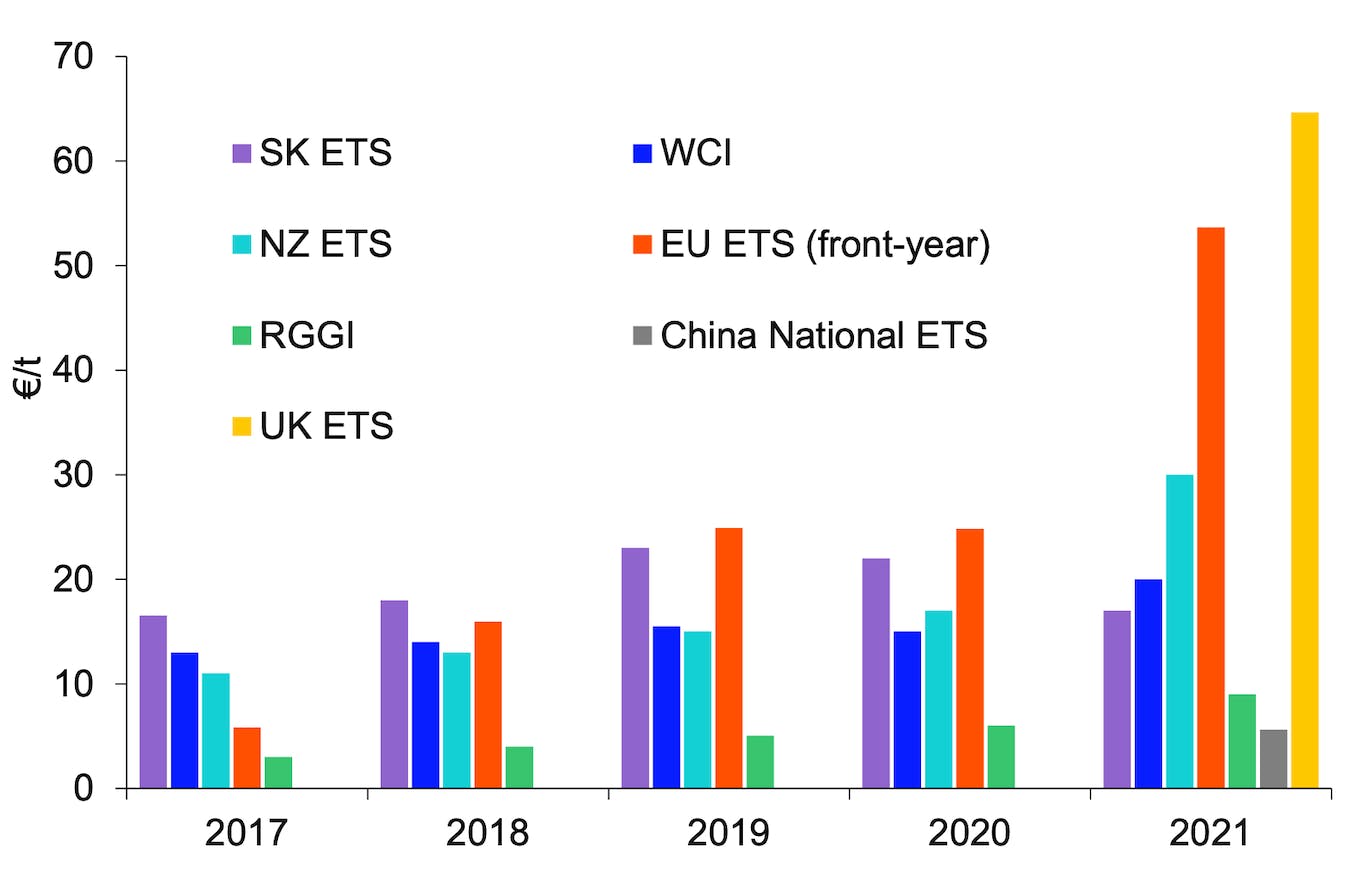 Annual average price per tonne for emission trading systems across different jurisdictions. Local prices have been converted to euros. Prices for allowances in cap-and-trade programmes worldwide are going up. Source: Refinitiv

Prices surged as traders expect the availability of carbon allowances to tighten if the bloc is to meet its aggressive climate targets, said Refinitiv. Soaring natural gas prices which propelled coal power generation has also spurred demand for allowances, pushing up the price. Refinitiv analysts expect that this will continue to impact EU carbon prices going forward.

Asia-Pacific’s carbon markets are evolving as they move towards more ambitious climate targets, with emissions trading pegged as a key lever to help reach them. The price has rallied as a result. “We see a direct correlation between policies and prices,” the report said.

South Korea, the first East Asian country to implement a nationwide mandatory ETS, has seen prices rise as it tabled a higher emission reduction ambition. Refinitiv expects sentiment to remain bullish. Korea will be a key source of demand for international carbon credits, according to the analysis, as the country attempts to fulfil more stringent mitigation goals.

China launched its national ETS in July in a bid by the world’s biggest polluter to lean on market mechanisms to slash carbon dioxide emissions. It has a modest volume of trading compared to more mature carbon markets in Europe, the report noted.

China’s carbon price has been steady at US$7.88-$8.76/metric tonne but is considered too low to drive significant decarbonisation of the power sector, or incentivise a switch away from coal.

The report showed that China’s volumes were low in the first months and prices dropped before a rebound in December. So far, volumes and prices have been modest as “most of the covered emitters entered this new market in a prudent learning mode,” Refinitiv said. The Chinese ETS covers only fossil power generators for now, but more industry sectors are set to be added gradually.

“The fact that companies were allowed to cover some of their emissions using cheaper offset units had a dampening effect on Chinese permit prices,” said Refinitiv analyst Luyue Tan. “Looking ahead, China’s emissions intensity benchmark for the power sector upon which compliance requirements are calculated, will decrease around 8 per cent from its 2019-2020 allocation level. This will lead to tighter supply, which should in turn provide upwards price support in 2022.” 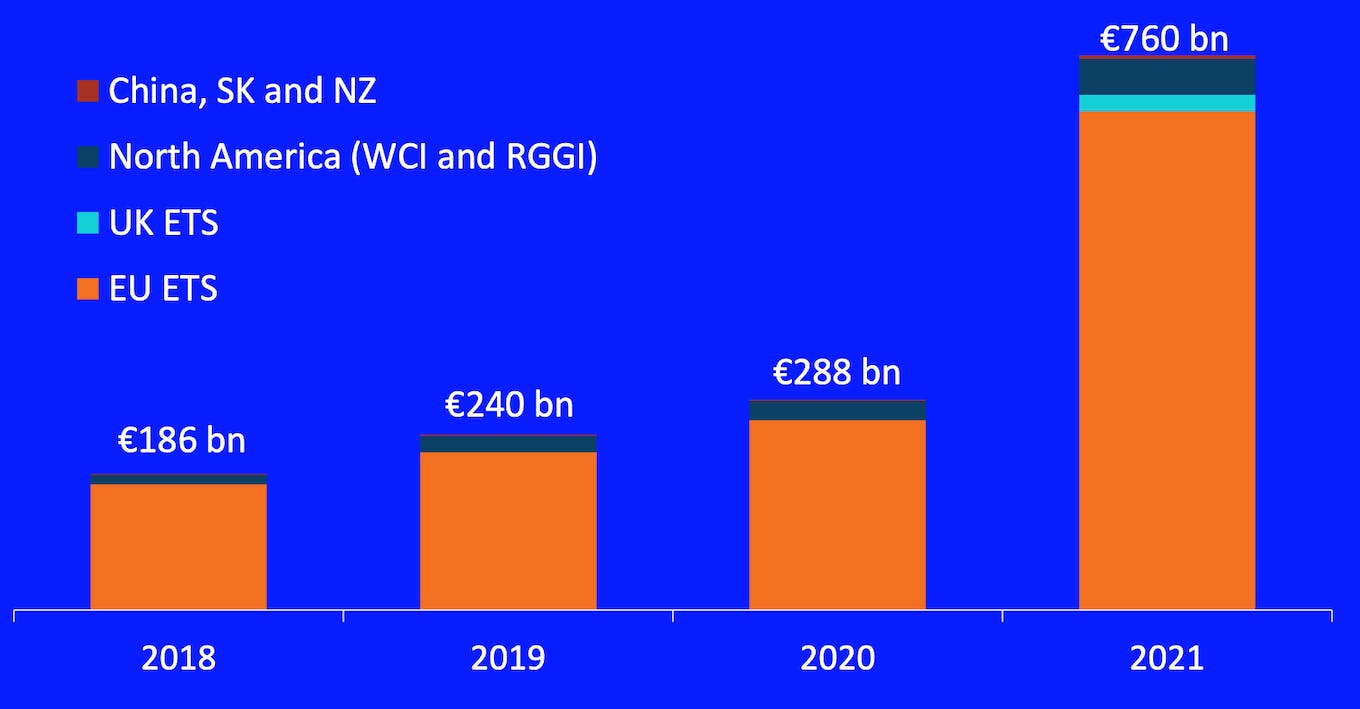 Refinitiv analysts expect the voluntary carbon market (VCM) to continue to grow as companies look to hit their carbon neutrality goals and other climate commitments. Carbon credits are increasingly being bought by firms to offset or neutralise their emissions to become ‘carbon neutral’ or to make ‘net zero’ claims. The VCM had a turnover of US$1 billion last November, putting it on course for an all-time high annual value, the report said.

The rules to instill integrity around the voluntary market are still being thrashed out, after world leaders finally came to an agreement on the Paris Agreement’s Article 6 transaction rulebook during the COP26 summit in Glasgow last year. The market remains fragmented with several competing exchanges and volume traded bilaterally, the report noted.

The Taskforce on Scaling Voluntary Carbon Market (TSCVM), a private sector coalition of voluntary carbon market stakeholders, is attempting to define and standardise criteria for the trading of offsets. While the Voluntary Carbon Market Integrity Initiative (VCMI) aims to set rules that will help ensure project integrity and transparent transactions. Both bodies will release guidelines this year.