The haze is likely to hit Southeast Asia early in 2021—is climate change to blame?

Smouldering hazy fires are burning earlier than usual this year, after a relatively haze-free 2020. This points to the irregularity and unpredictability of climate change, say experts.

Forest fires in Indonesia that produce dangerous air pollution that affects much of Southeast Asia are more likely this year amid warmer, drier climatic conditions, according to experts.

The haze is also likely to start earlier this year, because of the dry weather, which leaves Indonesia’s forests and carbon-rich peatlands—vast tracts of which have been drained to plant palm oil and pulpwood—particularly vulnerable to fire.

Some fires have already been recorded on Riau on Sumatra and Kalimantan on Borneo, and Indonesia’s president Joko Widodo has warned that more fires could break out in May, with the worst to come between August and September.

The haze season, which has been an annual environmental calamity almost every year since the 1980s and the start of industrial agriculture in Indonesia, typically starts in June.

Benjamin Tay, executive director of Singapore-based environmental group People’s Movement to Stop Haze (PM.Haze), said that last year provided a “respite” from the haze because of the La Niña climate pattern that brought wetter weather to the region. This year, however, the dry season has started earlier, potentially as a result of climate change. 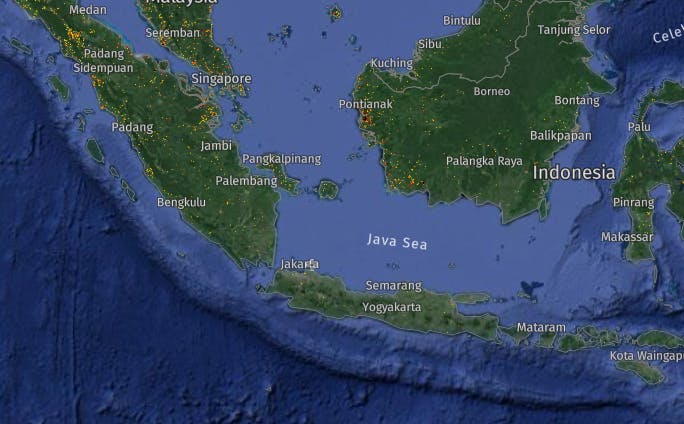 A study by World Wide Fund for Nature in 2007 projected warming of 0.2 to 0.3 degrees Celsius in temperature every decade in Indonesia, a 10 per cent increase in precipitation during rainy seasons, and up to 75 per cent decrease in rainfall in the dry season.

While climate change has left the land exposed to fire, slash-and-burn farming to clear vegetation for palm oil and pulpwood plantations is at the root of the problem. Burning land to prepare it for planting is quicker and cheaper than clearing it mechanically.

Smallholder farmers tend to shoulder much of the blame for starting the fires, but large pulpwood and oil palm companies continue to drain peatlands, creating ideal conditions for the fires, according to non-government organisations working on the ground in Indonesia.

Dr Goetz Martin, Jakarta-based head of sustainability implementation at palm oil company Golden Agri-Resources (GAR), said that it was “likely” that there would be more fires in 2021 than 2020, because of the drier weather, but added that the drivers of fire are complex.

“Rural poverty and Covid-related disruption to local food supply chains, as well as people returning to their communities looking for ways to generate income, are important factors,” he said.

This week, GAR is launching a campaign on local radio in Riau, East and West Kalimantan to raise awareness of the dangers of forest fires. It will run in tandem with the company’s fire-free village programme, which persuades villagers living in and around plantations to avoid the use of fire to clear land.

Meanwhile in Singapore, PM.Haze is ramping up a campaign to encourage businesses and consumers to choose certified sustainable palm oil, and promote their use of “haze-free” products.

Singapore is one of a number of countries, including Malaysia, and Brunei, and, in bad years, Thailand, Vietnam, and the Philippines, that are affected by transboundary haze pollution. While 2020 was relatively haze-free, 2019 was one of the worst years in recent memory for transboundary haze.

A total of 328,724 hectares of land burned in Indonesia from January to August 2019 alone, according to the country’s national disaster agency. It was the most severe haze since 2015, when smoke pollution caused $16 billion in economic losses and more than 500,000 people to suffer from respiratory problems, while daily carbon emissions from the fires exceeded those of the European Union.