A campaign by green group People's Movement to Stop Haze calls on Singapore's many food and beverage businesses to promote their use of palm oil that does not cause environmental and social harm.

Food and beverage businesses in Singapore that use sustainable palm oil are being asked to carry signage indicating they are “haze-free”, as part of a new campaign called “Haze-Free Foodstand” by local green group People’s Movement to Stop Haze (PM.Haze).

The campaign aims to encourage Singapore’s many eateries to promote their use of palm oil that is grown in ways that do not harm forests or people to their customers.

The haze is an annual problem in Southeast Asia, caused by slash-and-burn forestry in Indonesia to prepare land for palm oil plantations. Singapore is usually affected by the smoke from burning peatlands that drifts over the border.

Though the use of sustainable palm oil is increasing, businesses are often reluctant to communicate their use of palm oil to consumers, even if it is sustainably grown, because of the crop’s poor reputation. Some 96 per cent of restaurants in Singapore use palm oil as a cooking oil, according to a study by PM.Haze.

Unlike some other green groups, PM.Haze does not support a boycott of palm oil, an ingredient found in half of all supermarket products which is widely blamed for deforestation and wildlife loss in the countries where it is grown. 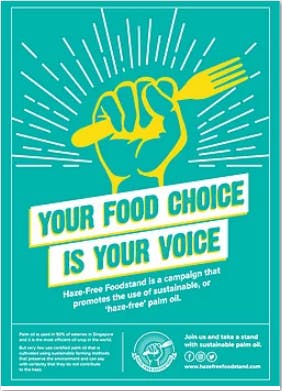 Your food choice is your voice: The Haze-Free Foodstand campaign, by People’s Movement to Stop Haze

The group instead calls on businesses to switch to sustainable palm oil, an efficient crop that yields five to 10 times more than other types of vegetable oil. Sustainable palm oil is grown by companies that have adopted policies that promise no deforestation, no exploitation of workers or communities, and no development on peatland, and is certified by the Roundtable on Sustainable Palm Oil (RSPO).

News of PM.Haze’s campaign emerged on Wednesday (4 November) at the 7th Singapore Dialogue on Sustainable Resources, organised by the Singapore Institute of International Affairs. Perpetua George, group sustainability general manager for palm oil giant Wilmar International, said that Singapore needed to do more to tackle deforestation and other agriculture-related issues, and “not just react when there’s an emergency — a haze event”.

The Malaysia-based executive noted that PM.Haze is the only Singaporean organisation that is consistantly focused on tackling problematic forestry issues “and not just when there is a big haze upon us”. PM.Haze’s work includes blocking drainage canals in Riau, a region of Sumatra that is regularly affected by the haze.

“Their Haze-Free Foodstand campaign is really trying to create consumer awareness about something that plays a big part in people’s everyday lives — food, which let’s face it, is a big thing for Singaporeans,” George told Eco-Business after the event.

“A more consistent stand from the government on supporting sustainable commodities will cascade better to consumers and regular Singaporeans,” she said.