The fight to save Singapore's pioneering food forest

Since 1999, organic farmer Evelyn Eng-Lim has been tending to one of Singapore's last surviving permaculture farms. However, redevelopment may lay waste to 22 years of effort.

Populated mostly by military facilities and farms, the remote and relatively undeveloped landscape of Lim Chu Kang in the northwestern tip of Singapore provides a striking contrast to the meticulous city-state’s steel and concrete sheen. However, this could all soon change.

In 1999, organic farmer Evelyn Eng-Lim and her husband Lim Tian Soo went about transforming an unattractive 2.2 hectare block of land littered with construction waste into Green Circle Eco-Farm, one of Singapore’s last remaining permaculture farms. However, the food forest they’ve spent 22 years cultivating could disappear by the end of this month, as the government plans to reacquire the land for military use.

Green Circle Eco-Farm is not the only agricultural enterprise facing redevelopment in Lim Chu Kang.

In October 2020, the Singapore Food Authority (SFA) announced a plan to build a 340-hectare “high-tech, highly productive and resource efficient agri-food cluster” nearby. In an age of increasing food shortage, authorities say this cluster will enable the island nation to achieve its “30 by 30” goal of producing 30 per cent of its food needs locally by 2030. However, its construction will clear 11 existing food farms by 2027.

With Eng-Lim’s appeal to extend her lease rejected on 24 April 2022, supporters of Green Circle Eco-Farm have launched a petition urging the government to preserve the farm for ecological, educational and cultural reasons. Currently, the petition has received nearly 5,000 signatures. 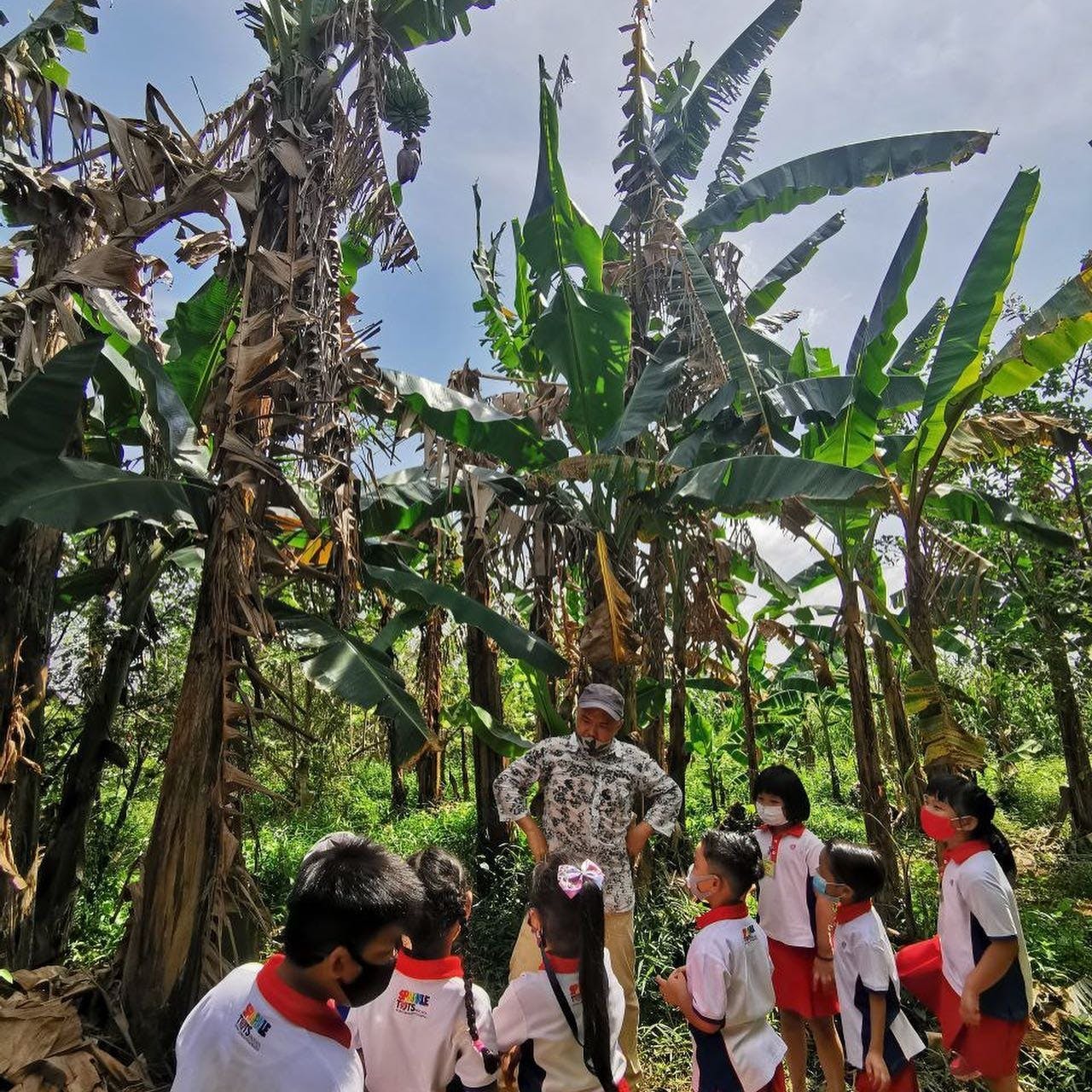 In an interview with Eco-Business, Eng-Lim spoke extensively about the various environmental education programmes she has been providing to students of all ages, from kindergarten to university institutions. Christopher Leow, urban farming executive of social enterprise Edible Garden City said preserving Eng-Lim’s food forest would enable future generations to better understand and relate to ecological systems in their everyday lives.

“People, especially children, need immersive environments [like food forests] to understand how things work. If we lose such an important space, we also lose an immediate connection between city life and the natural environment. If it took Evelyn 22 years to build this amazing forest, I don’t think you can build anything similar in a shorter amount of time,” he said.

Professor L. Roman Carrasco, an associate professor and assistant head of the National University of Singapore’s (NUS) Department of Biological Sciences, highlighted the importance of indigenous knowledge as Eng-Lim’s experience in cultivating native plants could be used to further scientific and medical research. 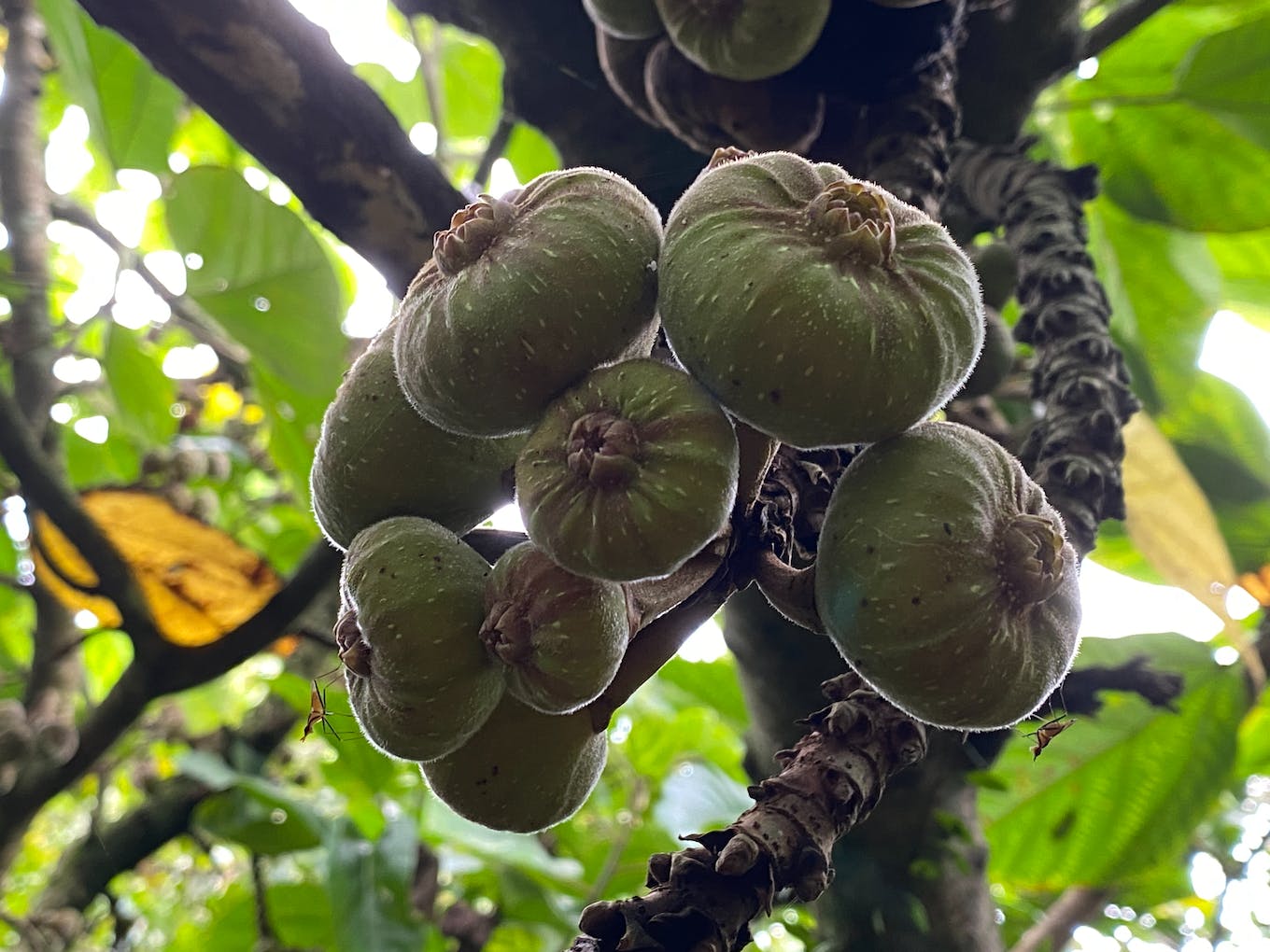 Over the past 22 years, Evelyn Eng-Lim has been cultivating perennial plants which are becoming increasingly rare, such as the Roxburgh Fig (Ficus auriculata) pictured here.

“While we may have an understanding of how these plants may be grown and used on paper, putting that into practice is not so straightforward. Getting plants to thrive requires experience, and these plants do not just have culinary, but medical applications as well,” he explained in an interview with Eco-Business.

Though efforts to discover and verify the medicinal benefits of local and regional plants continue, investigations into folk medicine have and will remain an important research discipline for some time. For example, a 2019 study led by Professor Koh Hwee Ling, an associate professor from the NUS Department of Pharmacy, found three tropical medicinal plants which not only attract pollinators, but also have compounds with anti-cancer properties. One of them, the South African Leaf (Vernonia amygdalina), can be found on Green Circle Eco-Farm.

The food forest’s social and educational value is far more important than any vegetable they can produce.

A former lieutenant himself, Leow argues that food forests like Green Circle Eco-Farm need not necessarily compete with the military for land use, as they can work together to provide better training opportunities for military personnel.

“Learning more about how to identify and grow native plants is a survival technique which can be used in military training. Why not marry them together?” he asked.

According to the SFA, a conventional vegetable farm in Singapore only generates 130 tonnes of produce per hectare each year, whereas high-tech farms can produce more than eight times that amount under similar space and time constraints. However, despite the lower yields, Leow feels permaculture farming is a resource- and space-efficient way of producing food, especially considering the food forest’s other social and environmental functions. 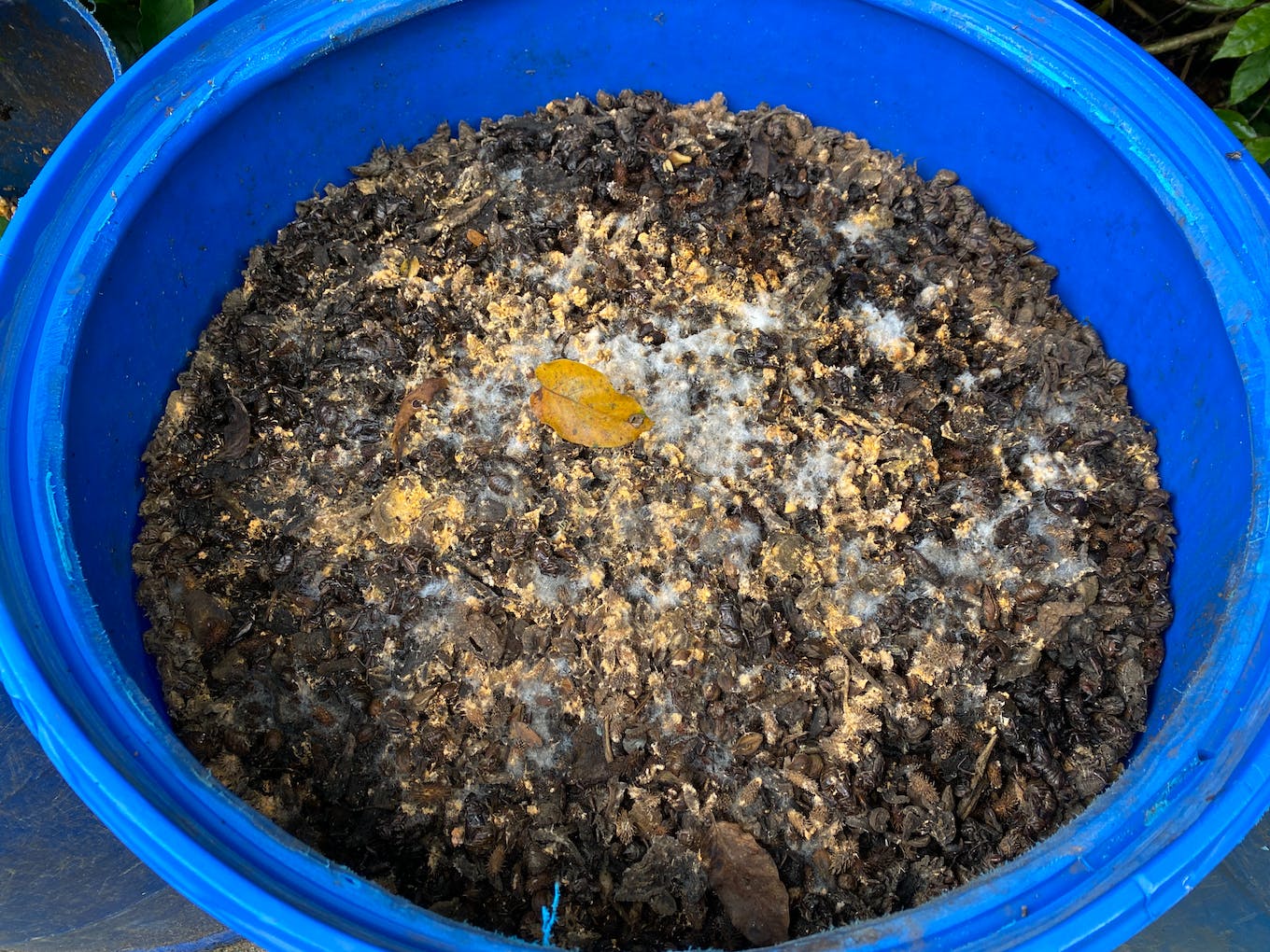 Green Circle Eco-Farms uses traditional chinese medicine (TCM), mung bean and garden waste taken from local business and housing estates to make nutrient-rich compost, as evidenced by the presence of white mycelium fungus. Through this process, Eng-Lim estimates she diverts 95 tonnes of waste from Singapore’s landfill each year. Over 22 years, she has managed to cultivate 15cm of fertile topsoil. Image: Eco-Business

He said: “I think focusing purely on yield is a very disconnected way of looking at food. Permaculture farms like Evelyn’s require almost zero electricity, water, fertiliser and pesticides, and for that investment, I think the returns are very comparable [to high-tech farms]. Food forests are also space-efficient, as up to seven layers of vegetation may be grown in one space, with the added benefit of building soil health, sequestering carbon and being open to public participation.”

Moreover, in a rapidly warming world, experts say food supply chains will become increasingly unstable. Although Carrasco acknowledged their higher yields, he also pointed out that an overreliance on indoor food farms could negatively impact Singapore’s future food security, as such facilities are often energy-intensive, and require imported seeds, substrates and fertilisers which are vulnerable to geopolitical forces.

Instead, Leow argued that Singapore’s food security could be better served by including Green Circle Eco-Farm into the SFA’s Lim Chu Kang Masterplan, given its proximity to the proposed development areas, and its potential to be a seed repository for native vegetables, which are highly climate resilient.

Leow added that maintaining the farm would also be consistent with Singapore’s Green Plan, which includes goals like allotting 50 per cent more land to nature park space, and planting 1 million more trees.

Local restaurant owners have also expressed their concerns over the imminent reacquisition of Green Circle Eco-Farm, as they believe such farms still provide much variety and vibrancy to Singapore’s local cuisine. Kuah Chew Thian, co-founder and manager of zero food waste restaurant Kausmo, warned that closing such farms could endanger Singapore’s food heritage. Furthermore, it could also threaten the supply of native perennial vegetables, which are slowly becoming popular among local high-end restaurants, but are becoming increasingly difficult to come by. 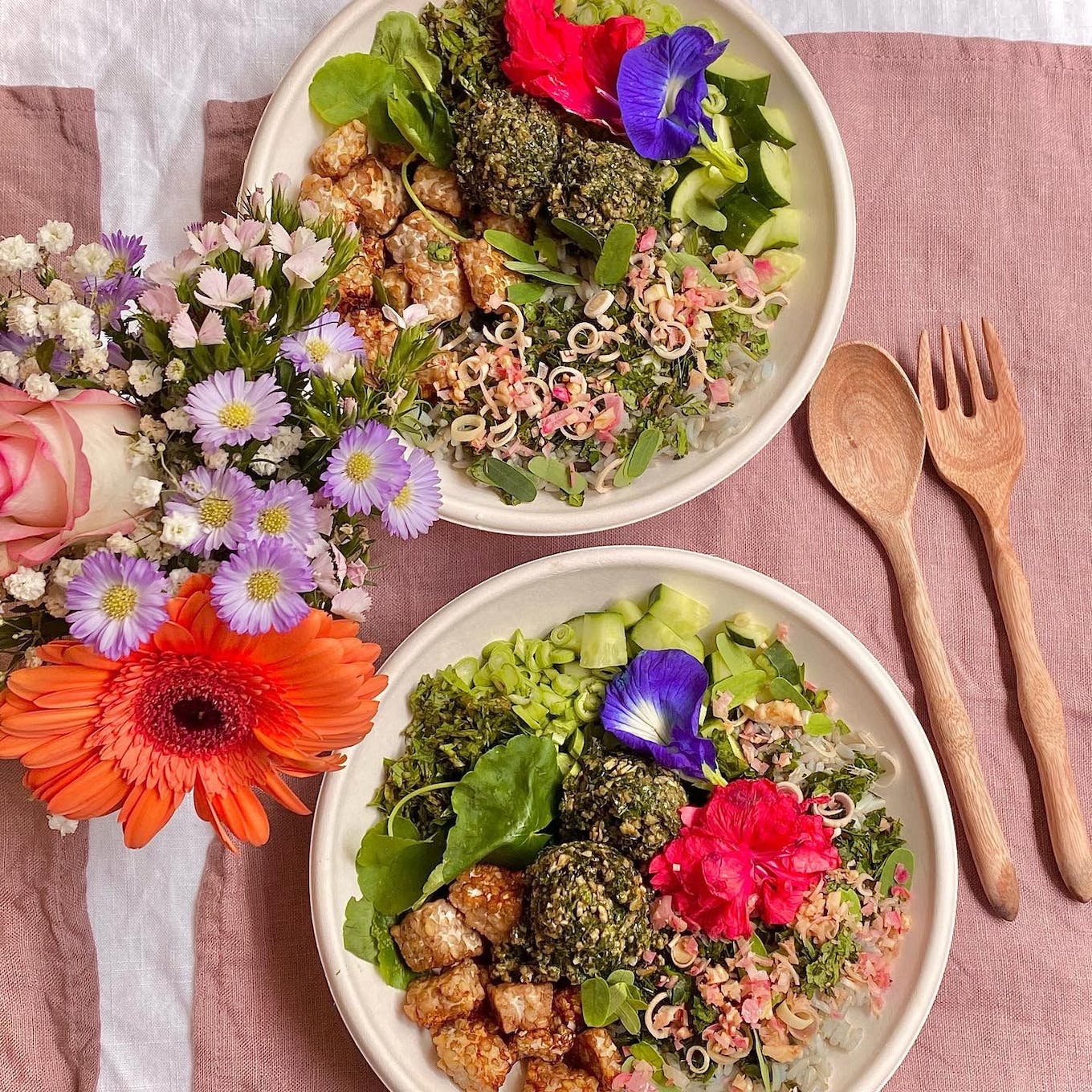 “Perennial plants like the Tonkin Jasmine would definitely be lost with the closure of Green Circle Eco-Farm. The plant produces deliciously sweet and crisp flowers often seen in home-cooked omelettes from the days when  Singapore had kampongs [rural villages, which have made way for high-rise residential blocks]. However, these cuttings are rarely available these days, and growing them requires a dedicated space which most producers find challenging to accommodate,” Kuah said.

Jacinda Yee, founder of vegan restaurant The Breakfast Club added that the vegetables she sources from Eng-Lim’s farm provides customers with a more educational and meaningful dining experience.

“[These native vegetables] add to the dining experience and allow our customers to learn something new. They are often surprised that our local produce is capable of bringing out such great flavours. The grass is not always greener on the other side, and our local produce is also very valuable and precious,” she said.

Carrasco reiterated the important functions food forests serve in forging a sense of belonging and improving mental health, which is particularly valuable resource after the collective trauma of the Covid-19 pandemic.

“One of the food forest’s main role is creating social capital and connections. It’s a way of bringing the kampong back to our modern way of life. Working together with like-minded people towards the common goal of becoming more sustainable will create a more tightly-knit community, which aids our mental health. The food forest’s social and educational value is far more important than any vegetable they can produce,” he said.