Taiwan 'fights' for a greener future

Taiwan's government has committed to making Taiwan a nuclear-free nation and to meeting the standards of the Paris Agreement. This year's Taiwan International Green Industry Show offers a glimpse into how the island could do just that.

Exercise machines that feed energy to the grid and health-enhancing flooring - these were just a few cutting-edge products on show at the Taiwan International Green Industry Show (TiGiS), which offered a glimpse into how the island is seeking a more resource-efficient, carbon-light future for the island.

Speaking at the opening ceremony on Wednesday last week, Kitty Wong, president of the tradeshow organiser Expo Union Corporation, said that while the new administration has pledged to make green energy a cornerstone of its governance, it remained to be seen how proposals turn into reality.

“Like United States presidential candidate Donald Trump said of his opponent Hillary Clinton in the last debate, ‘She doesn’t quit. She doesn’t give up. She’s a fighter’, I hope the Taiwanese government will fight to make Taiwan more sustainable,” Wong said in Mandarin.

Green energy is the future and means business opportunities, and is important to mitigate climate change.

The show was launched this year in an opening ceremony that saw the attendance of Taiwanese vice president, Chen Chien-jen.

Chen told the audience at the opening ceremony: “Green energy is the future and means business opportunities, and is important to mitigate climate change.”

He added that the government is determined to make Taiwan a nuclear-free nation and is working to install more solar panels in public institutions and state-owned factories.

The government also plans to back Taiwanese businesses and help them develop international opportunities.

“The Taiwanese government will be a fighter,” he said, in a nod to Wong’s comments.

Technology for the future 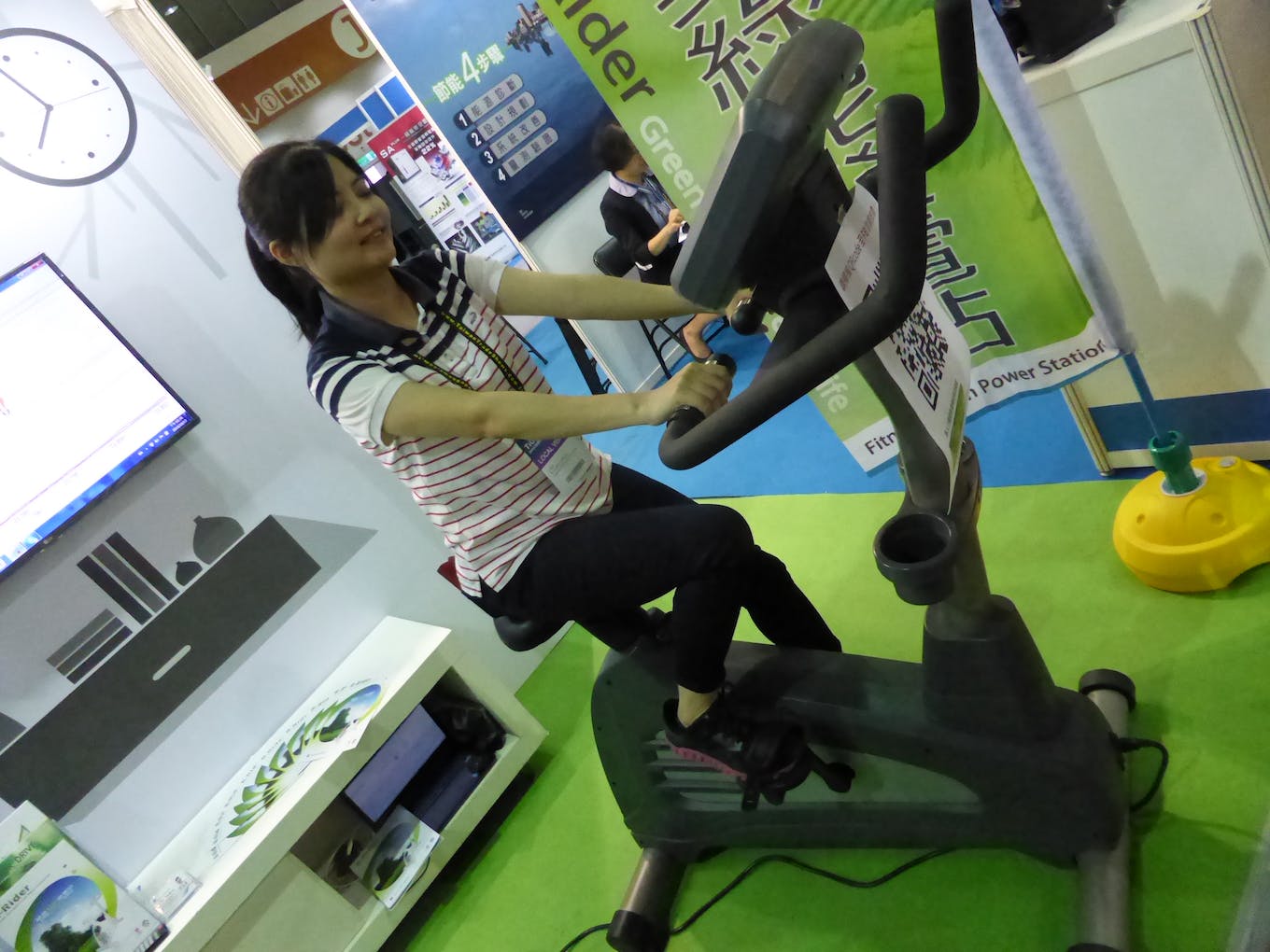 This looks like an ordinary fitness machine but it is not. Excess energy generated through its use will be sent to the grid as electricity.

This year’s TiGiS was held together with the 2016 Taiwan International Photovoltaic Exhibition, which showcased the latest solar PV systems, equipment and applications from Taiwan and abroad. Both shows featured 255 exhibitors occupying over 530 booths.

On the TiGiS showfloor, government-related or partner organisations - such as the Taiwan Green Trade Project Office and the Foundation of Taiwan Industry Services - featured various new technologies by local companies, with a range of products for industrial or consumer use.

One eye-catching product was the “R-Rider” inverter created by a local company called Rhymebus, which can be installed into any exercise machine including ellipticals and stationary bicycles to capture the heat and motion generated by movement.

While generating electricity through exercise is not a new idea, Rhymebus’ inverter is the first to feed energy back to the grid, said Robert Lo, the company’s sales representative in its corporation planning department. He said the average person could generate roughly 100 watts through exercise in an hour, creating enough energy to charge four iPhones.

The company is currently collaborating with a number of Taiwanese exercise machine-producing companies to roll out its inverters on a larger scale in Taiwan. 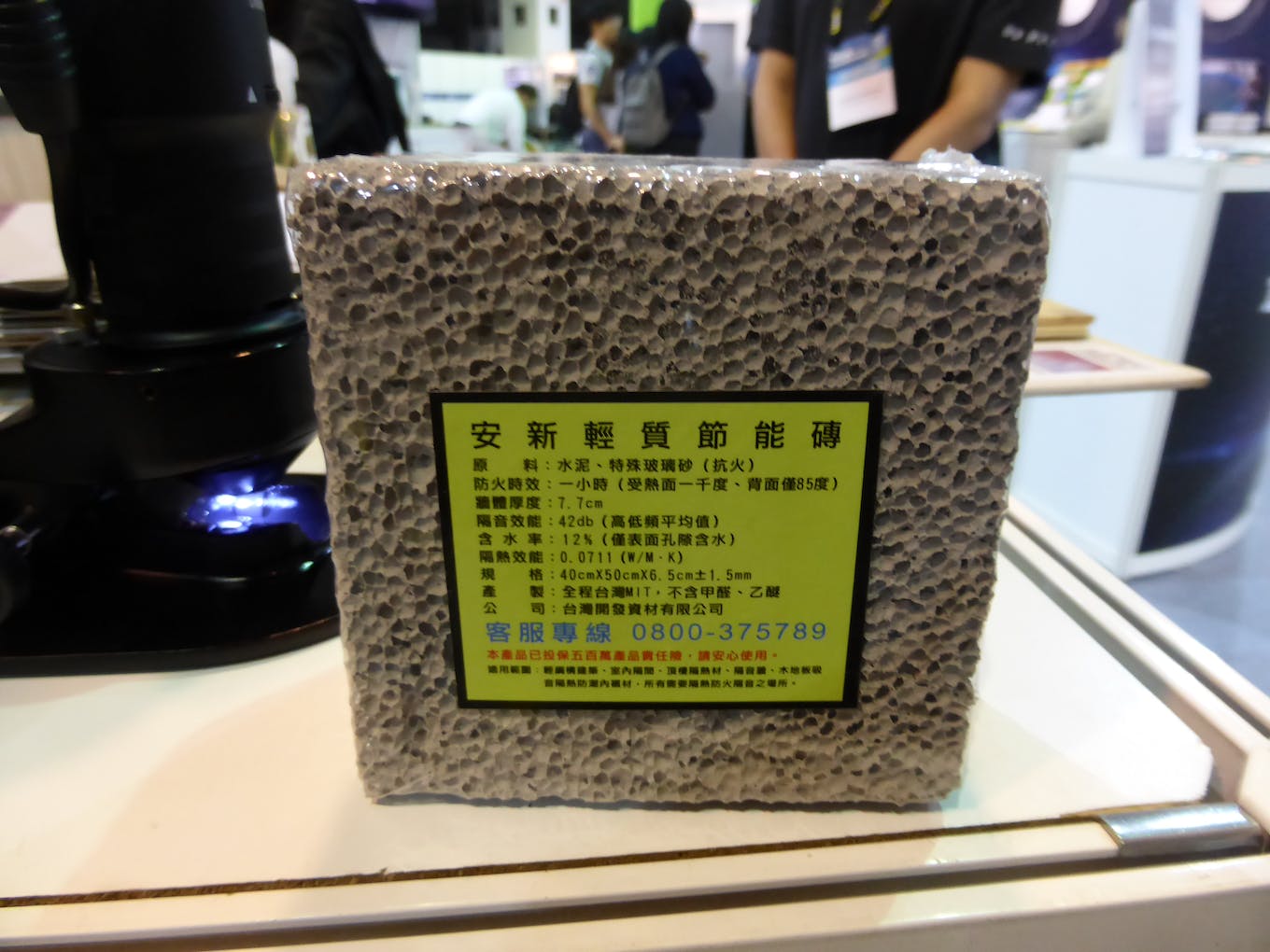 The Anxin Lightweight Energy-saving Brick is made from glass and can be recycled endlessly.

One product that is already making inroads in the construction industry is the Anxin Lightweight Energy-Saving Brick, which is made entirely from glass recycled from TV and mobile phone screens.

Produced by the Taiwan Material Development company, the blocks are grey and sport a honeycomb-like surface. The pockets of air within the honeycomb-like structure offer layers of air cushions for soundproofing and fireproofing.

They are also formaldehyde, ether and asbestos free, and some 100,000 square metres of the bricks are being used in Taiwanese buildings. They are also being distributed elsewhere in Asia, including Singapore. 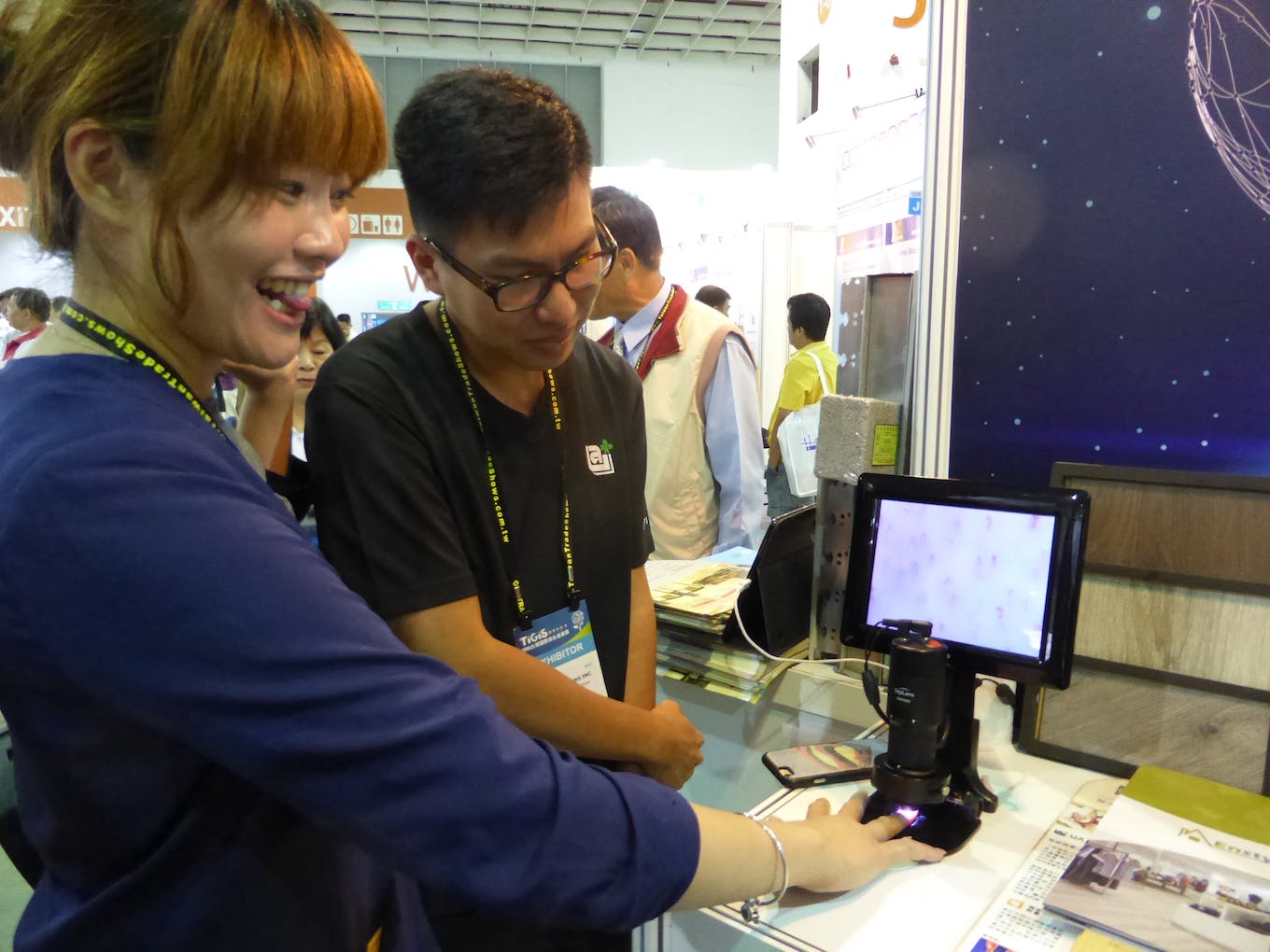 Flooring for home and office use that emits far infrared rays is another unique technology and is owned by Taiwan’s Ua Floors, especially beneficial to Asian households where shoes are not worn indoors.

The company holds the patent to a liquid used to treat wood and give it far infrared ray properties, making the wood antibacterial and blood circulation-enhancing. Direct contact with the wooden surfaces treated with this technology causes water molecules in the blood to become smaller, increasing the speed of blood flow throughout the body.

Cliff Lee, Ua Floor’s product manager, said the company purchases recycled wood from torn down churches in the United States and Canada, while its factories are Forest Stewardship Council certified.

Ua Floors and Taiwan Material Development’s booths were both within the pavilion belonging to the Green Trade Project Office, which is part of the Bureau of Foreign Trade under the Ministry of Economic Affairs.

George Hu, marketing consultant at the Green Trade Project Office, told Eco-Business: “After COP 21 last year in Paris, 77 countries ratified the agreement to reduce emissions, so they have their requirements to meet. Although Taiwan is not among these countries, we are one of the major supporters of that green summit, so our government will move towards that direction.” Taiwan is not a member of the United Nations Framework Convention on Climate Change, whose members signed the COP 21 agreement last year.

Hu highlighted that LED and solar cell production technologies are “fundamentals” of Taiwan’s green trade approach, but that consumer products could be another area to move into in the future.

“A lot of SMEs have tonnes of great ideas mostly for consumer market, so we do have a lot of manufacturers - from 200 to 600 green products between 2011 to 2016 - in our online green product inventory.

“The majority of these are consumer products, so that might be one of the focus areas that we help SMEs to push internationally,” he said.