NTU Divest wants the university to disclose how much it invests in fossil fuels companies. It also aims to be a platform to empower students and staff to speak up about environmental and social injustices.

Named NTU Divest, the group has called on the university to disclose the amount it invests in the fossil fuels industry with a view to reinvest the funds in sustainable industries. It is the third university group in three years to sprout a divestment campaign in the conservative city-state following similar moves from students at Yale-NUS in 2017 and the National University of Singapore (NUS) the following year.

“We launched NTU Divest because we want NTU to be accountable for its investments,” the group of five founding members told Eco-Business.

“The fossil fuel industry is not compatible with a climate-safe future. Collective individual action alone is not sufficient; systems and institutions must respond to the climate crisis with the urgency and magnitude that it warrants,” they said. 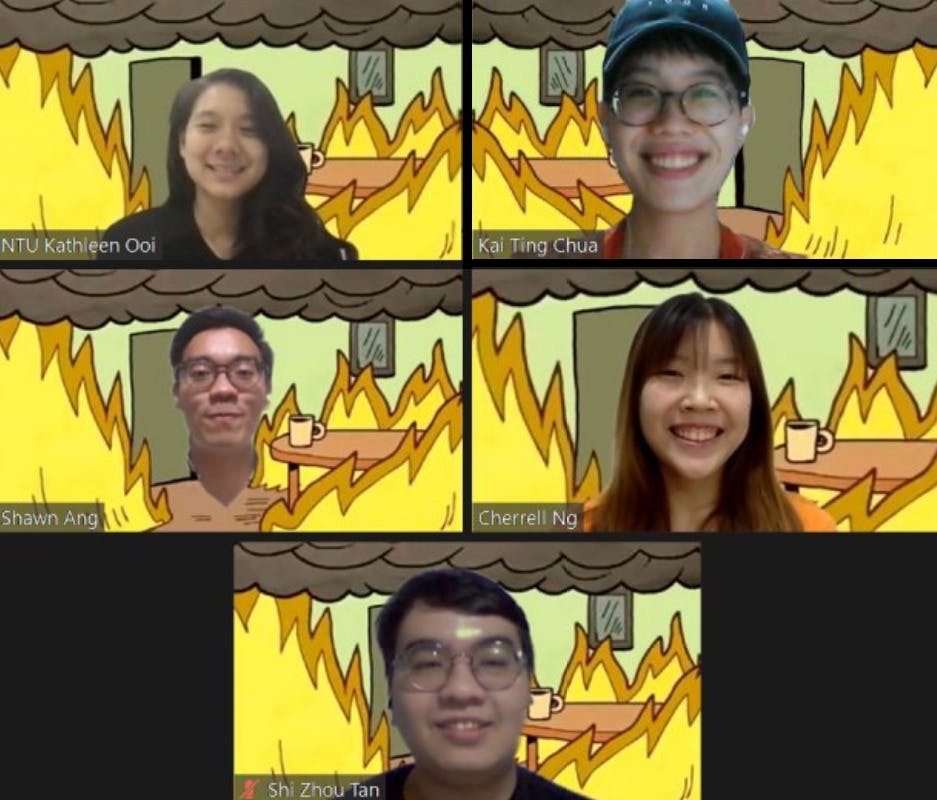 The founding members of NTU Divest on a Zoom call. They chose as their backdrop a burning house in tribute to student activist Greta Thunberg, who has said ‘our house is on fire’ in a rallying cry for climate action. Image: NTU Divest

NTU’s management has told the group that environmental, social, and governance (ESG) factors guide its investments, but would not reveal details on its ESG policies or disclose its fossil fuels exposure, citing the complexity of investment holdings and a lack of direct control over investments, NTU Divest said.

A lack of transparency around how much of the university’s endowment is invested in fossil fuels is a key obstacle to divestment efforts, since the endowment is independently managed by external fund managers to prevent a conflict of interest.

NTU Divest has also reached out to the university’s president, Dr Subra Suresh, who they note has been a vocal supporter of sustainability since his appointment in 2018, committing to boost solar energy deployment and increase energy efficiency on campus. Suresh has not responded.

The fossil fuel industry is not compatible with a climate-safe future. Collective individual action alone is not sufficient; systems and institutions must respond to the climate crisis with the urgency and magnitude that it warrants.

The group believes that a portion of the university’s investments go into fossil fuels, “since the school has not communicated otherwise”, and pointed out that rival college NUS has revealed that it has a “single-digit fossil fuel exposure.”

“We hope that NTU would be as transparent and willing to have conversations about divesting from fossil fuels and reinvesting into sustainable industries,” the group said, pointing to other universities, such as partner colleges University of Manchester and the University of California, which have announced divestment plans in the last year.

“As a leading global university committed to environmental sustainability, we believe that NTU is similarly capable of committing to divestment,” they said.

Update 26/6/20: Tan Sin Mui, NTU’s chief investment officer, said in a statement: “NTU adopts an Environmental, Social and Governance—or ESG-aware—investment approach that is more holistic than just focusing on fossil fuels divestment. The University recognises that the cost of capital for ESG-unfriendly investments has been rising, and this is taken into consideration in the investment decision-making process. This investment mandate is given to our external fund managers and their exposure to fossil fuels is small and incidental to their strategy.”

Update 27/6/20: NTU Divest responded to NTU’s statement, saying they wanted to have direct communication with the university, and maintain an open dialogue. They stated:

As well as engage with the school’s management, NTU Divest aims to become a platform for NTU’s community to talk about climate action and why it’s important for the university to reduce its reliance on fossil fuels. It is also about “empowering individuals to speak up about environmental and social injustices”.

The group is the latest sign of Singapore’s increasingly vocal green movement. The city-state does not tolerate protests without a permit, and marches or sit-ins are not allowed. However last year, a month after Prime Minister Lee Hsien Loong spoke about climate threats for the first time in his National Day Rally speech, more than 2,000 people attended the country’s first climate rally to protest against government inaction on climate change.

Earlier this month, a taskforce of industry leaders assembled by the government to revitalise the Singapore post-Covid economy was criticised in parliament and by civic society groups for excluding voices they say could set the country on a more sustainable path. NTU Divest was among those pushing for the inclusion of minority groups and green businesses to be represented in the taskforce.