News Tapping into the future of sustainable rubber

In the last 30 years, Asia has doubled the area of land dedicated to rubber plantations, where environmental abuses run rampant in its complex supply chain. Now, the biggest stakeholders in rubber are setting new standards with the launch of the Global Platform for Sustainable Natural Rubber.

By 2050, the number of cars in the world is expected to more than double as urban population growth and rising incomes lead to increased demand for mobility. This has led to louder calls for a more environmentally friendly, energy efficient transport sector.

But what’s been missing from the conversation on sustainable transport so far is a key material that cars and other vehicles literally run on: rubber. 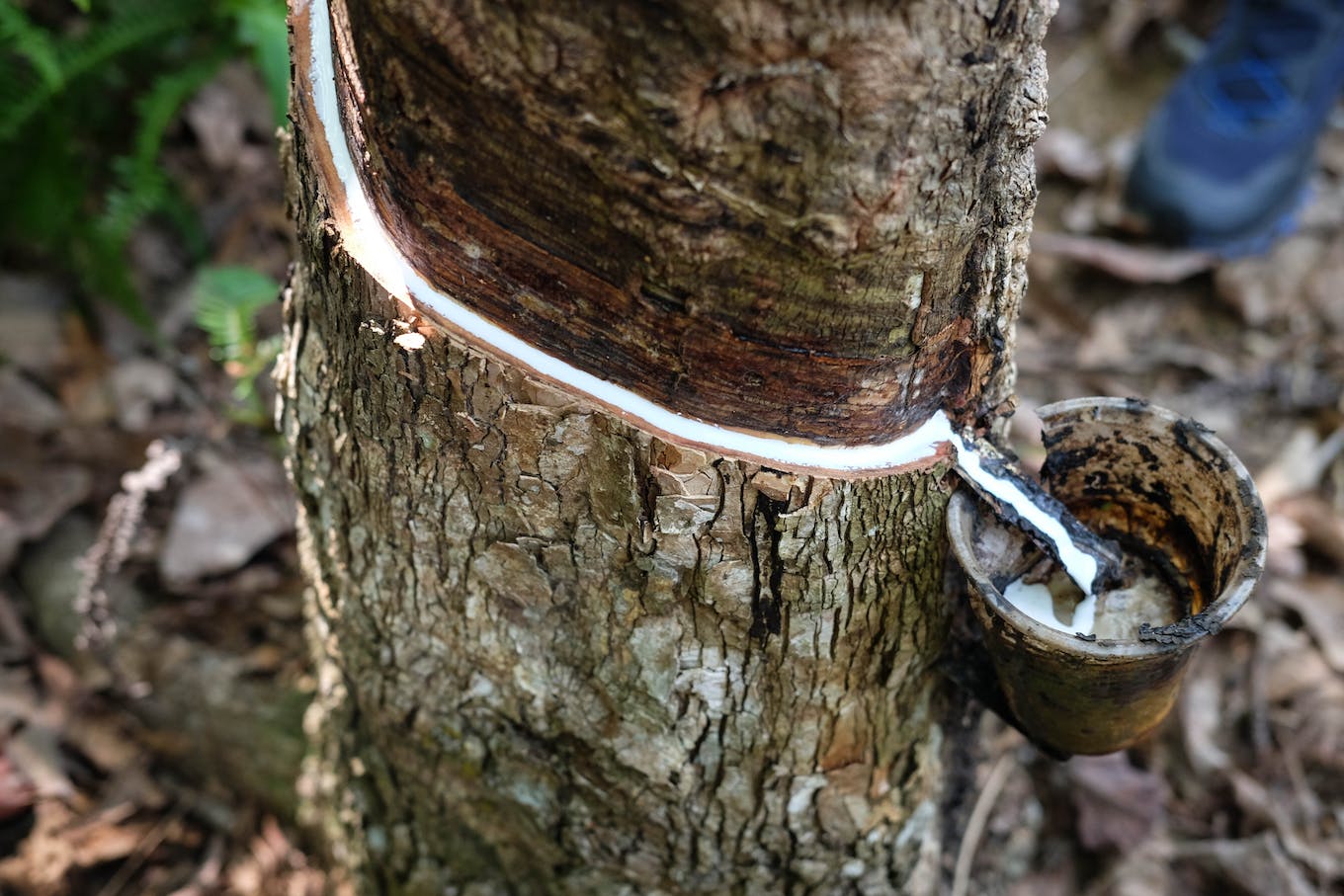 Rubber is harvested by tapping the bark of the rubber tree and collecting the liquid latex sap in small cups. A common practice by smallholder farmers is mixing bits of dirt with the liquid to make the product heavier. This leads to contamination of pure rubber, which is more likely to receive a good price. Improper tapping practices also cause scarring and long term damage to the tree. Image: Eco-Business

Around 70 per cent of the world’s supply of natural rubber is used to manufacture the wheels that move cars and enable airplanes to take off and land. In the last two decades, the consumption of natural rubber, which is primarily produced in the world’s tropical regions, has been increasing at a steady rate of 5 per cent every year.

Ideal climate and soil conditions in Thailand, Malaysia, Indonesia and Vietnam have made Southeast Asia the epicentre of global rubber production. Ninety per cent of the 13.960 million tonnes of rubber tapped last year came from this part of the world. The last 10 years have also witnessed the expansion of industrial rubber practices in Cambodia and Laos, after land in China and Vietnam began to deteriorate as a result of large-scale rubber production. 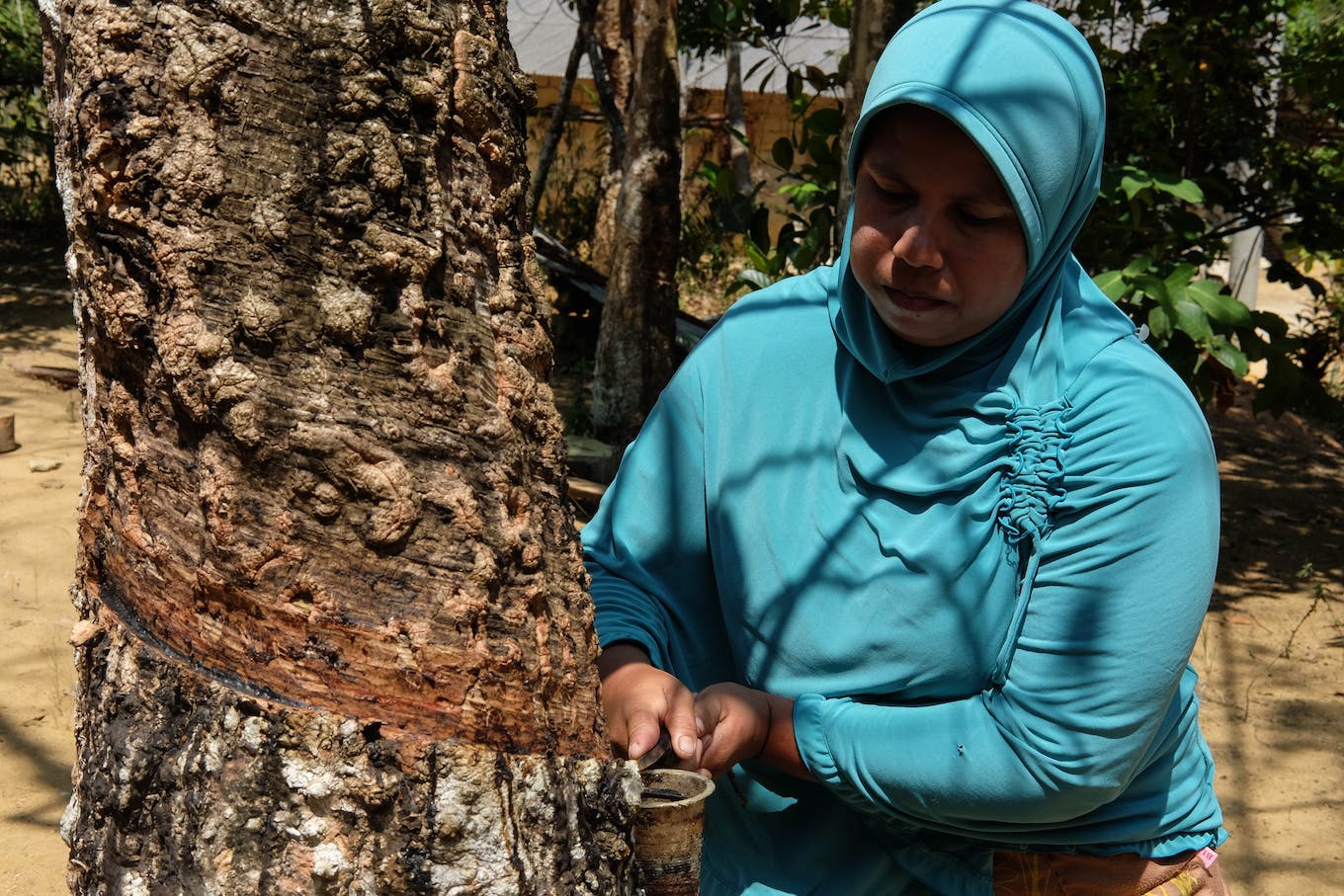 Bu Yanto, 45, taps one of the rubber trees on her land, which spans two hectares. Every morning, she wakes up at 2am to start working on the plantation with her husband, and they stop work only at 9am. Like many other smallholder farmers in Bintan, she grows local fruit such as durian and jackfruit alongside rubber trees. Image: Eco-Business

On a recent trip to Bintan, an Indonesian island located an hour from Singapore’s shores, Eco-Business got a first-hand look at the reality of smallholder rubber farming in Asia and the challenges of charting a sustainable path for rubber.

Although natural rubber has not received as much attention as fellow tropical commodity palm oil, it creates a similar set of social and environmental problems, from contributing to rapid deforestation to a history of land grabs and human rights violations in the Mekong.

However, unlike palm oil, which is mainly produced in large estates owned by big, family-owned corporations, close to 85 per cent of global rubber is produced by smallholders in Asia, making traceability a major issue in the industry’s quest for sustainability. 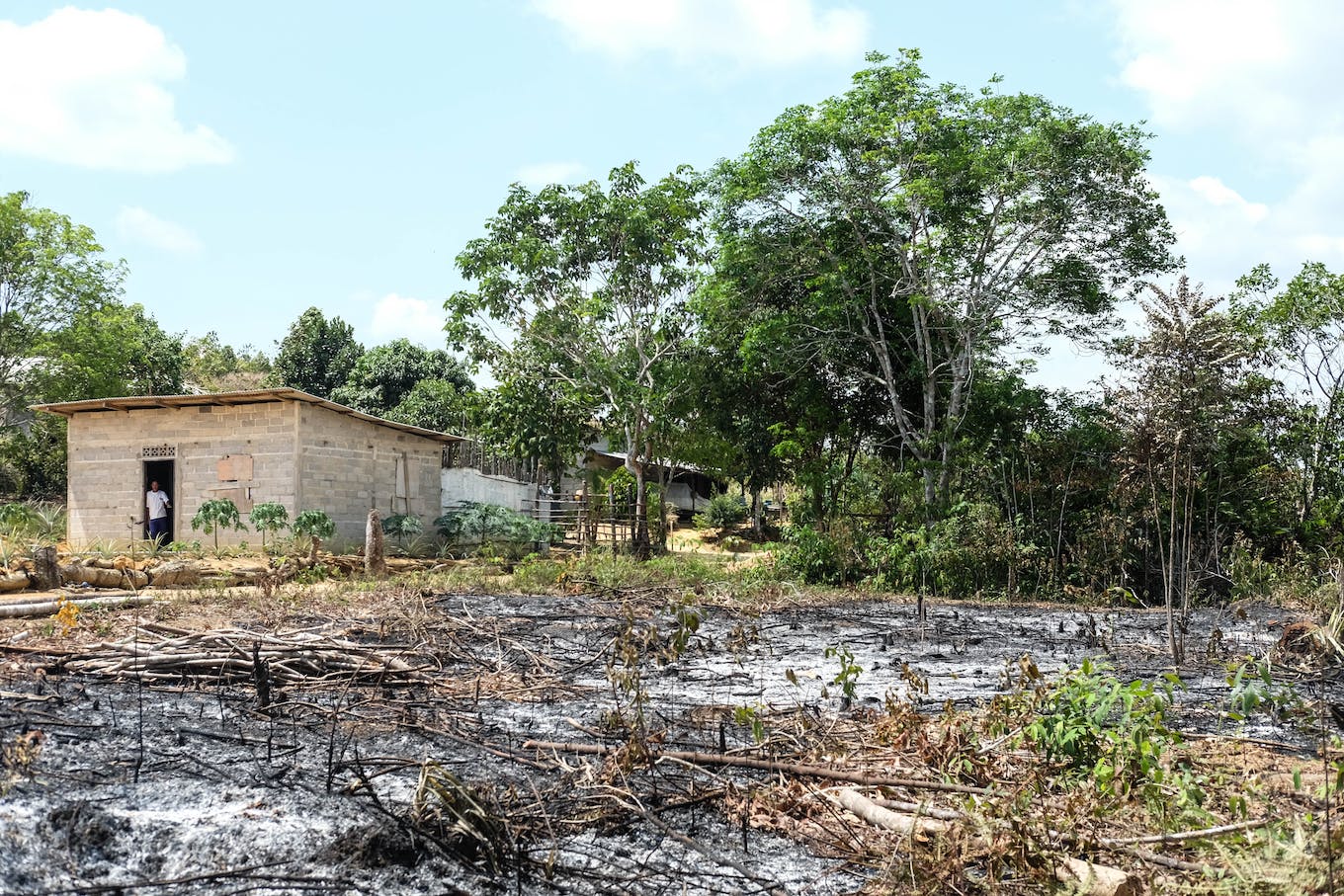 Degraded land in a village in Bintan, Indonesia, where smallholder farmers grow rubber trees as well as local crops to supplement their income. Image: Eco-Business

“Natural rubber is a crucial element of tyre production, driving the importance of its sustainability,” William Dusseau, manager of technical relations at Cooper tyre and rubber company, told Eco-Business. “A coordinated, universal and standard industry approach is the way to drive solutions in establishing and promoting sustainable natural rubber practices.”

He added that the launch of the Global Platform on Sustainable Natural Rubber (GPSNR), which took place last Thursday at the World Rubber Summit in Singapore, was a significant step in developing and maintaining sustainable rubber standards. 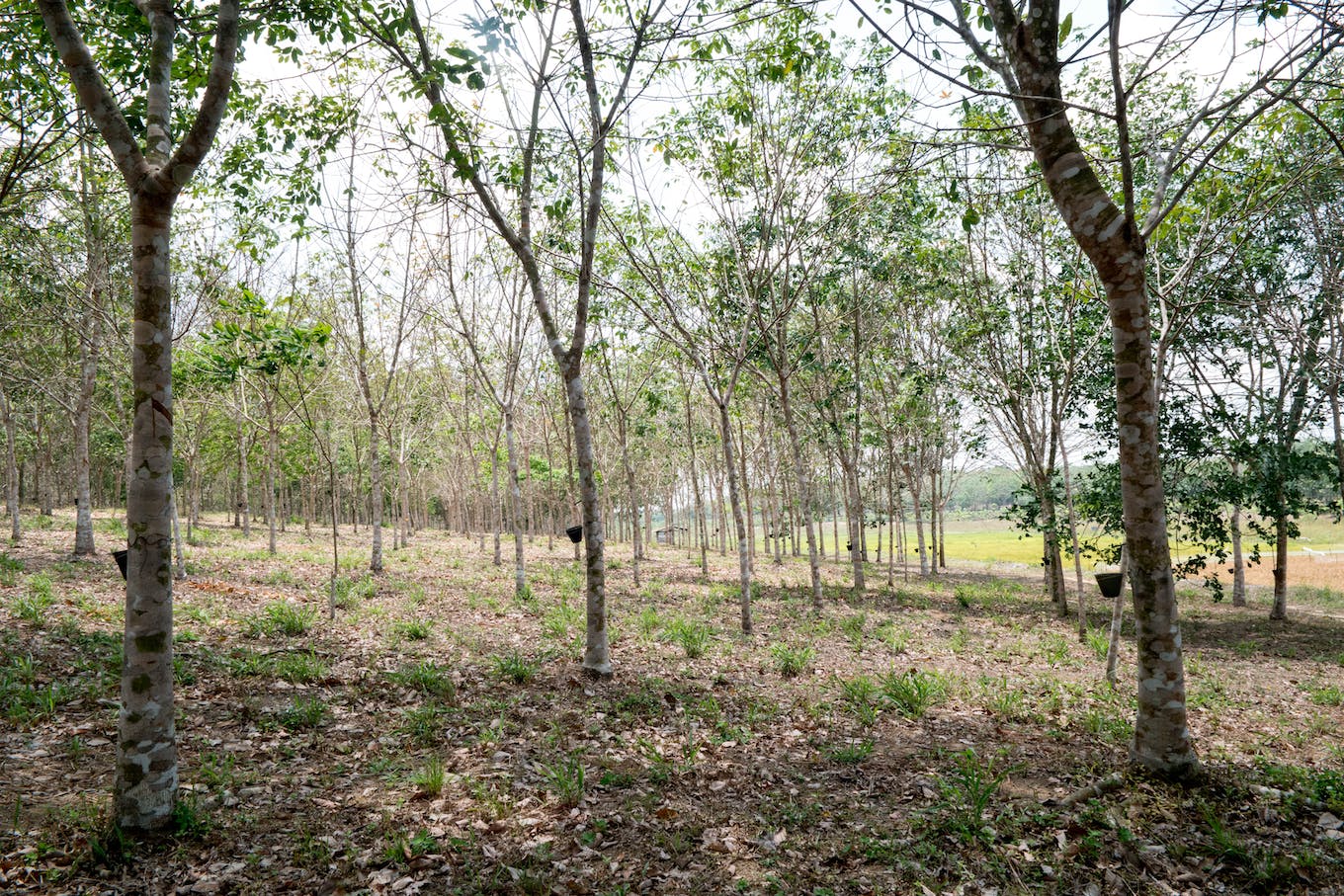 Bintan Prima Agro (BPA) is a plantation estate in the Taopaya district in Bintan. BPA was established in 2012 to transform the traditional plantation into a professionally managed operation with a fixed planting distance between trees. The plantation also uses higher quality collection cups, which most smallholders in Bintan cannot afford. Image: Eco-Business

Members of the new platform include major brand tyre companies such as Cooper, Michelin, Pirelli, and Bridgestone and global car manufacturers including BMW Group, Ford Motor Company and General Motors.

According to Jean Bakouma, head of the Forest Program at WWF-France, since the rubber value chain is primarily driven by buyers, tyre manufacturers hold the greatest leverage for improving both the socioeconomic and environmental performance of natural rubber production. 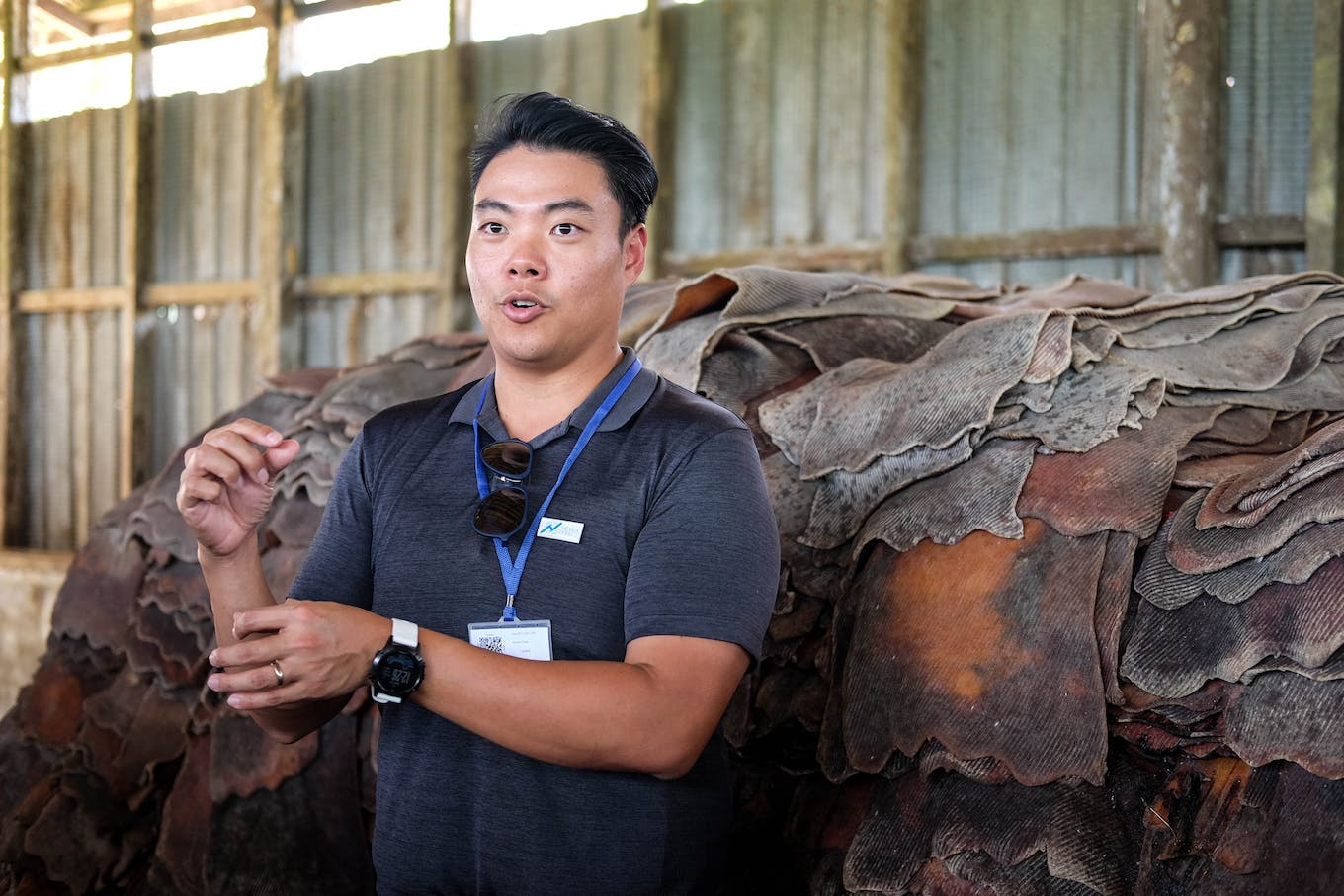 Gerald Tan, director of commercial development of digital sustainable rubber platform HeveaConnect, comes from a family that has worked in the rubber processing industry for four generations. Experience and education on proper agronomy practices is key to ensuring environmental sustainability and higher yield for farmers engaged in Bintan’s rubber production, he says. Image: Eco-Business 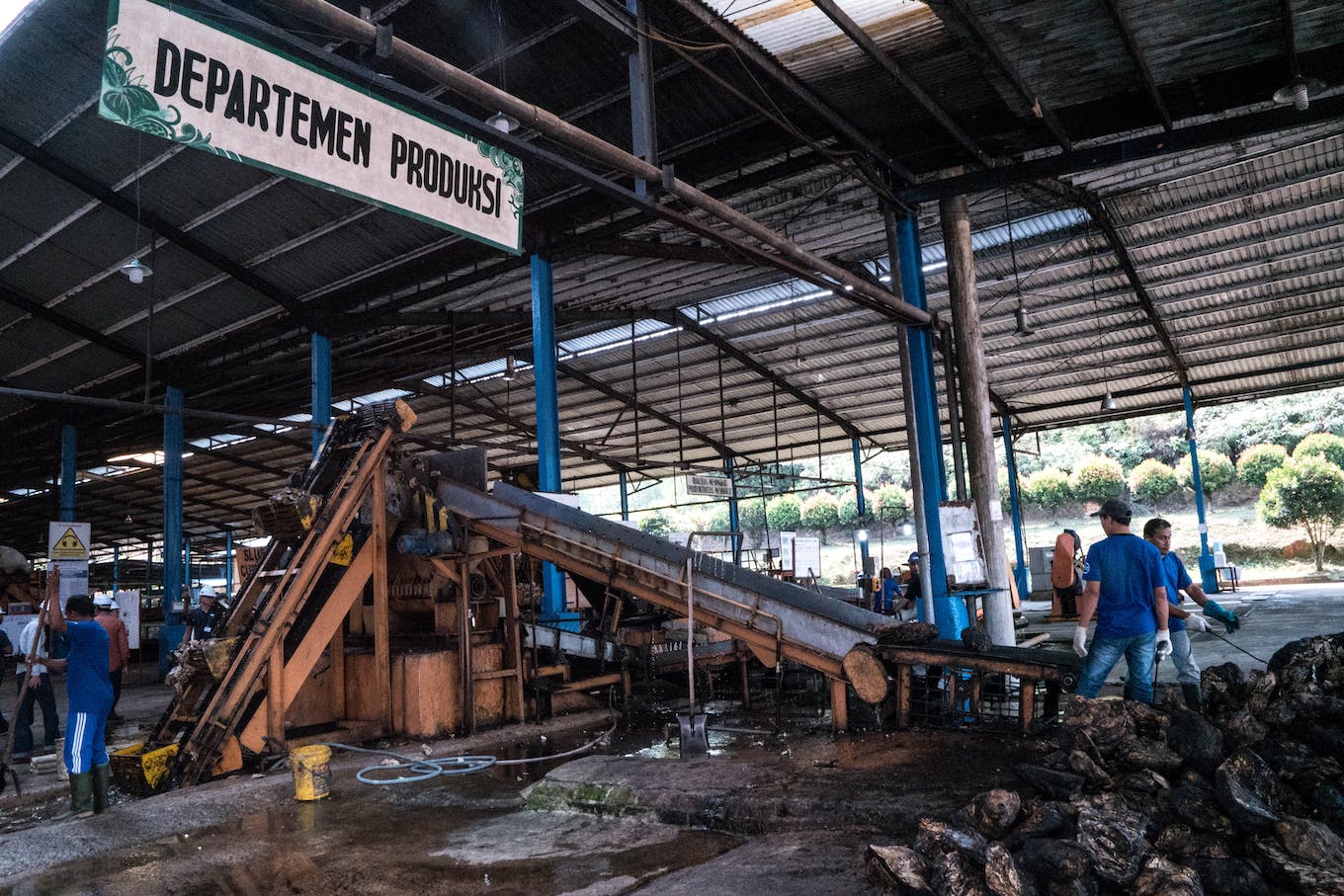 Workers clean rubber using a processing machine at the Pulau Bintan Djaya factory, which was established in 1969. The factory was acquired by global rubber supplier Halcyon Agri Corporation in 2018. Image: Eco-Business

“A robust sustainability policy that is thoroughly implemented by tyre manufacturers must consider sustainable natural rubber as a natural and responsible way to protect forests with high conservation value and high carbon stock, as well as foster other environmental services,” he said. 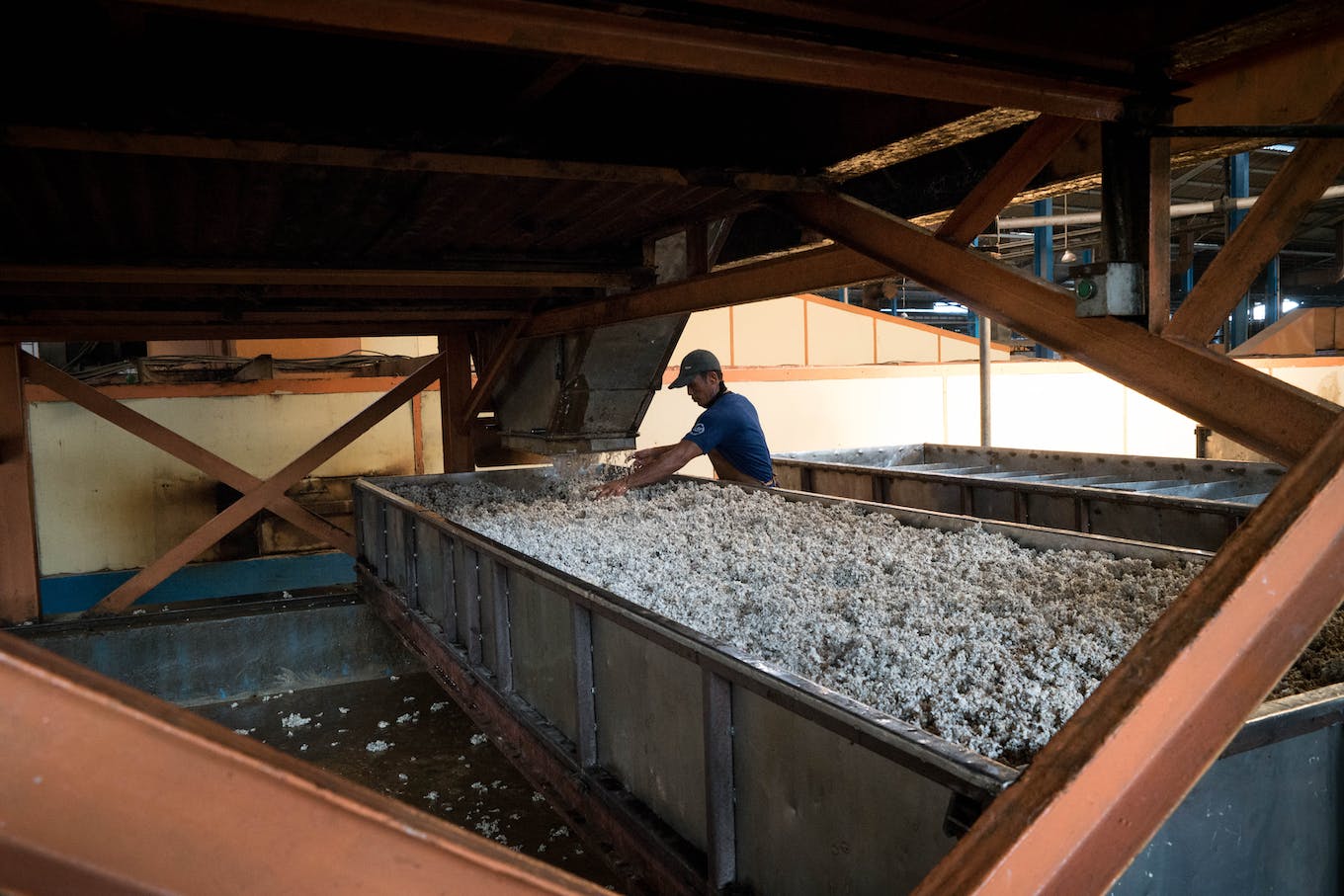 A worker fills a trolley with rubber before putting it through the dryer. All the rubber processed in the Pulau Bintan Djaya factory is exported to countries such as Japan, United States, Australia, China and Brazil, and is mainly used to produce tyres. Image: Eco-Business The water recycling facility at Pulau Bintan Djaya factory, where most water is treated and reused. It takes 30 cubic metres of water to produce a ton of rubber. Image: Eco-Business

Can natural rubber be farmed sustainably in the time of Covid-19?

The global natural rubber industry has taken a hit from the Covid-19 crisis, with some sustainability initiatives put on pause and smallholders struggling to make a living. What can businesses do to protect both?
Can natural rubber be farmed sustainably in the time of Covid-19?

Smallholder farmers: If you want to save forests, pay more for sustainable rubber

Smallholders in Asia make up the bulk of global rubber production. Encouraging them to produce the versatile material more sustainably is key to improving the industry’s environmental credentials, but it will be an uphill task. How can the business world help?
Smallholder farmers: If you want to save forests, pay more for sustainable rubber

What is sustainable rubber?

Rubber is one of the world's most widely used materials, but irresponsible farming methods have led to deforestation and human rights abuses as the sector has grown. Could there be a better way? Eco-Business explores the potential for sustainable natural rubber.
What is sustainable rubber?