News Tapping into the future of sustainable rubber

After moving to southern Thailand, where he began working at the Prince of Songkla University in 1997, he missed his farm.

He scouted around for land to buy and settled on a four-hectare rubber farm not far from the university.

The zoology-trained assistant professor, who has been a part-time rubber farmer for 18 years and a rubber researcher for about 13 years, has seen the impact of drought as well as heavy rain on his rubber trees.

Wet and dry spells have become more frequent, affecting the yields and livelihoods of rubber farmers, and Dr Bumrungsri believes climate change will intensify these impacts.

“In the last few years in southern Thailand, we have had no rain for 90 days. I have seen young rubber trees and also trees that are over 10 years old dying,” he said in a telephone interview. “I observed that at least 5 per cent of the trees died.”

Climate change will have a range of impacts on rubber cultivation, although much more research is needed on the topic, scientists say.

Generally, weather is expected to become more irregular and unpredictable. Such growing uncertainty is, of course, a source of risk.

Almost all of the world’s natural rubber—a crucial raw material for vehicle and airplane tyres—is currently grown in areas where the annual mean temperature is 26 to 28°C.

How rubber trees will fare in temperatures above that threshold is not known, as they have not been grown in hotter conditions, said Dr Philippe Thaler and Dr Eric Gohet of the French Agricultural Research Centre for International Development, or CIRAD, a public research organisation working for sustainable development in the tropical and Mediterranean regions.

With the United Nations’ Intergovernmental Panel on Climate Change projecting that temperatures will rise by 2°C or more by the end of this century, most rubber-growing areas today are staring at a more uncertain future.

Scientists do not know what the impact of higher temperatures will be on the rate of photosynthesis, water regulation, growth and yield of rubber trees, said Thaler and Gohet.

A small percentage of rubber is cultivated in cooler places such as Laos, northern Thailand and Hainan and Yunnan in China, where annual mean temperatures hover between 23 and 26°C.

But this does not mean that cultivation can expand in the face of global warming, as these areas could be prone to drought, said the CIRAD researchers.

For instance, although the suitable cultivation area in Xishuangbanna in southern Yunnan, China’s most famous prefecture for rubber cultivation, could double to about 800,000 hectares by 2045, scientists have advised the Chinese government to reduce the area for plantations, said Professor Xu Jianchu of the Kunming Institute of Botany, Chinese Academy of Sciences.

This is because rubber expansion would cause environmental damage and the loss of tropical rainforest, said Xu, who is also regional coordinator for East and Central Asia at the World Agroforestry Centre. Rubber cultivation can contribute to drought and deplete watersheds, he added.

Too much or too little water 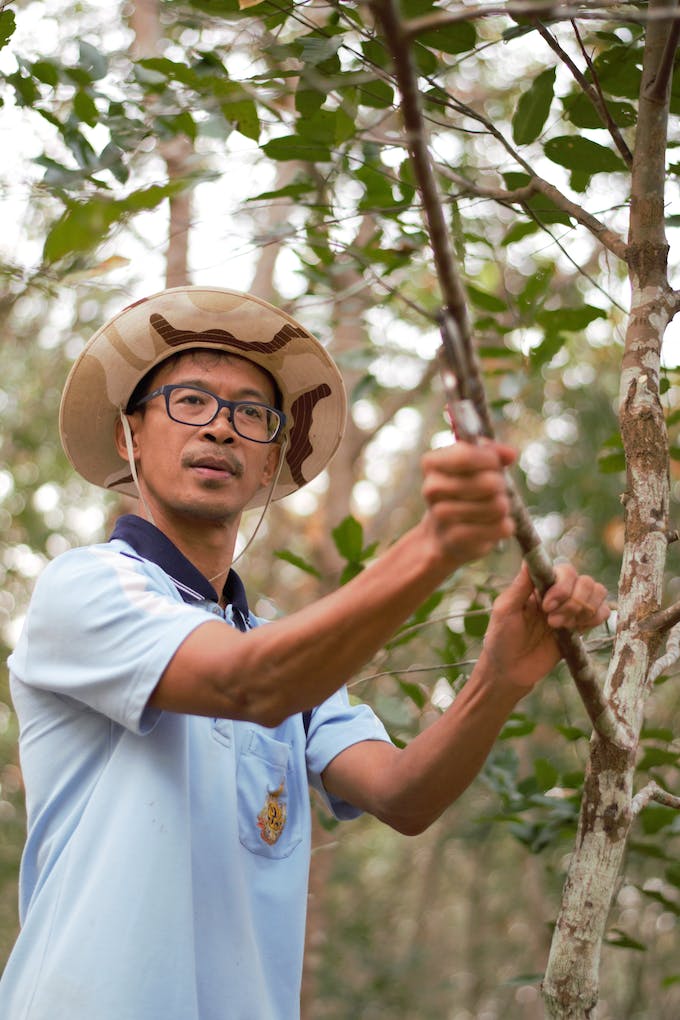 According to Bumrungsri, farmers in Thailand have found that if they tap their rubber trees at the same frequency during a drought—the norm is to tap for three consecutive days before taking a break on the fourth—the supply of latex dries up in subsequent years. The kingdom is the world’s largest producer and exporter of natural rubber.

“Sometimes you go to a farm and less than 50 per cent of the trees can be tapped,” he said.

And when there is too much rain, rubber trees may be seriously affected by Phytopthora, a fungi that is very common in humid conditions, said Bumrungsri.

“If you have long rainy days and farmers are still tapping, the trees will get this disease and the farmers will lose some portion of the tapping area on the tree,” he said. “It means the farmers have to stop tapping and they’ll have no income.”

Climate change may increase or decrease the incidence of some diseases—especially leaf diseases caused by fungi—by changing the conditions that would trigger an outbreak, said Thaler and Gohet.

Increased frequency of more extreme weather events, such as typhoons, could also affect plantations by increasing the incidence of wind damage, said the CIRAD scientists, who are currently based in Montpellier in France. Both have done research on natural rubber for about three decades and previously worked in countries such as Thailand and Cote d’Ivoire.

“Generally, weather is expected to become more irregular and unpredictable. Such growing uncertainty is, of course, a source of risk,” they said.

How to boost resilience

But the industry is not helpless in the face of climate change.

Rubber growers can boost their resilience with the right cultivation methods, said researchers.

In a monoculture where herbicides are used to get rid of the understorey, a plantation is likely to see more soil erosion and moisture loss, said Xu. Monocultures make up nearly half of global rubber production, according to the Food and Agricultural Organisation’s data.

The Prince of Songkla University has worked with more than 100 rubber farms nearby to plant timber trees and various fruit trees and vegetables, including nitrogen-fixing ones, on the plantations, he said.

The farmers hope to make furniture from the timber trees when they mature, and are looking to create other income sources by rearing honeybees or growing plants with medicinal value, he added.

In that way, they would be able to make a living during wet or dry spells, or when latex prices dip.

“If farmers don’t change, they will see greater negative impact from climate change,” said Bumrungsri. “If they change and adapt, they (may be able to cope).”

Governments can support farmers by providing funding to plant timber trees, and supplying weather data to aid planning and decision-making, said the experts.

Large rubber consumers can also contribute by funding climate-related research, and the industry should boost the proportion of natural rubber used in rubber products, as synthetic rubber (which makes up about 60 per cent of the market) is derived from fossil fuels, said Thaler and Gohet.

The launch of the Global Platform for Sustainable Natural Rubber (GPSNR) last year will help the industry to develop and maintain sustainable rubber standards.

Can natural rubber be farmed sustainably in the time of Covid-19?

The global natural rubber industry has taken a hit from the Covid-19 crisis, with some sustainability initiatives put on pause and smallholders struggling to make a living. What can businesses do to protect both?
Can natural rubber be farmed sustainably in the time of Covid-19?

Smallholder farmers: If you want to save forests, pay more for sustainable rubber

Smallholders in Asia make up the bulk of global rubber production. Encouraging them to produce the versatile material more sustainably is key to improving the industry’s environmental credentials, but it will be an uphill task. How can the business world help?
Smallholder farmers: If you want to save forests, pay more for sustainable rubber

What is sustainable rubber?

Rubber is one of the world's most widely used materials, but irresponsible farming methods have led to deforestation and human rights abuses as the sector has grown. Could there be a better way? Eco-Business explores the potential for sustainable natural rubber.
What is sustainable rubber?

In the last 30 years, Asia has doubled the area of land dedicated to rubber plantations, where environmental abuses run rampant in its complex supply chain. Now, the biggest stakeholders in rubber are setting new standards with the launch of the Global Platform for Sustainable Natural Rubber.
Stretching the conversation about sustainable natural rubber