They lost everything. Now, they are finding a way to survive.

We already know that climate change affects women disproportionately, but it is especially dramatic in Bangladesh. Caught between erratic rainfall and rising sea levels, women are struggling to guard their lives and livelihoods.

During an especially severe tropical cyclone in 1991, for example, 90 per cent of the 140,000 people who died in the country were women.

Women are more susceptible to the effects of climate change, more likely to die in disasters, and more likely to experience harassment as they flee, according to the Environmental Justice Foundation (EJF). They are also less likely to be included in climate negotiations and solutions. Like the struggle for gender equality, climate change is a vast, complex challenge.

“The vulnerability of women to climate change is not a coincidence,” said Juliette Williams, director of EJF. “Bangladeshi women struggling to cope as cyclones batter their homeland might seem like a different universe from women in Hollywood speaking out against abuse at the hands of powerful men, but these scenarios have the same root.”

As in many other countries, Bangladeshi women have less access to land, resources and decision-making than men. Their wages are lower. They are bound to family responsibilities, both to their children and to the elderly.

“Following disaster or displacement, it is more likely that women around the world will be victims of domestic and sexual violence. They may even avoid using shelters for fear of being sexually assaulted,” Williams said. “Achieving equal economic and social rights for women is the only way forward.”

So often their ambitions transcended their own futures, for which they had little hope, but focused on the lives of their children, for whom they wished a better future.

A 2007 study of disasters in 141 countries provides striking evidence of this. The study found in countries where men and women enjoyed equal rights, disasters resulted in the same numbers of deaths in both sexes. This stands in contrast to the disproportionate number of women who suffer in countries where their status is low — as Bangladeshi women did during the 1991 cyclone.

Moreover, research by the United Nations has found that including women in post-disaster reconstruction leads to more effective solutions. Without women’s input, there can be no robust and equitable response.

By and large, women are excluded from the decision-making process on how to tackle climate change, but there has been some progress.

At the most recent international conference on climate change, countries adopted the first-ever Gender Action Plan to incorporate gender equality into climate policy. It recognises the role of women in tackling climate change and aims to ensure that women can influence policy decisions.

The Gender Action Plan has particular relevance for Bangladesh, which is exceptionally vulnerable to climate change. Two-thirds of the country lies less than five meters above sea level, and the Bay of Bengal funnels cyclones toward seaside cities and towns. Rising seas and supercharged storms are worsening floods that inundate coastal communities and contaminate freshwater resources. Inland, increasingly unpredictable rainfall is driving riverbank erosion, threatening homes and crops.

Two photographers from the Environmental Justice Foundation visited Bangladesh in September 2017 to catalog these impacts. They spoke to women who told dramatic stories about the ways that climate change has affected their lives. They were struck by how many women were responsible — financially and otherwise — for their families because their husbands had abandoned them or were unable to find work.

“So often their ambitions transcended their own futures, for which they had little hope, but focused on the lives of their children, for whom they wished a better future,” said photographer Charlie Johnson.

“Many of the women we interviewed talked of the independence that their homes and lands provided for them,” Johnson said. “They worked their own land and grew their own food. When they were dispossessed by flooding, this freedom was taken away, along with everything they owned. That’s a hard thing to conceive of or relate to — to lose everything you have overnight and be forced to move hundreds of miles away to a slum in an unknown city. It’s a trauma… and it’s happening on an unimaginable scale across Bangladesh.”

Here are their stories in their own words. 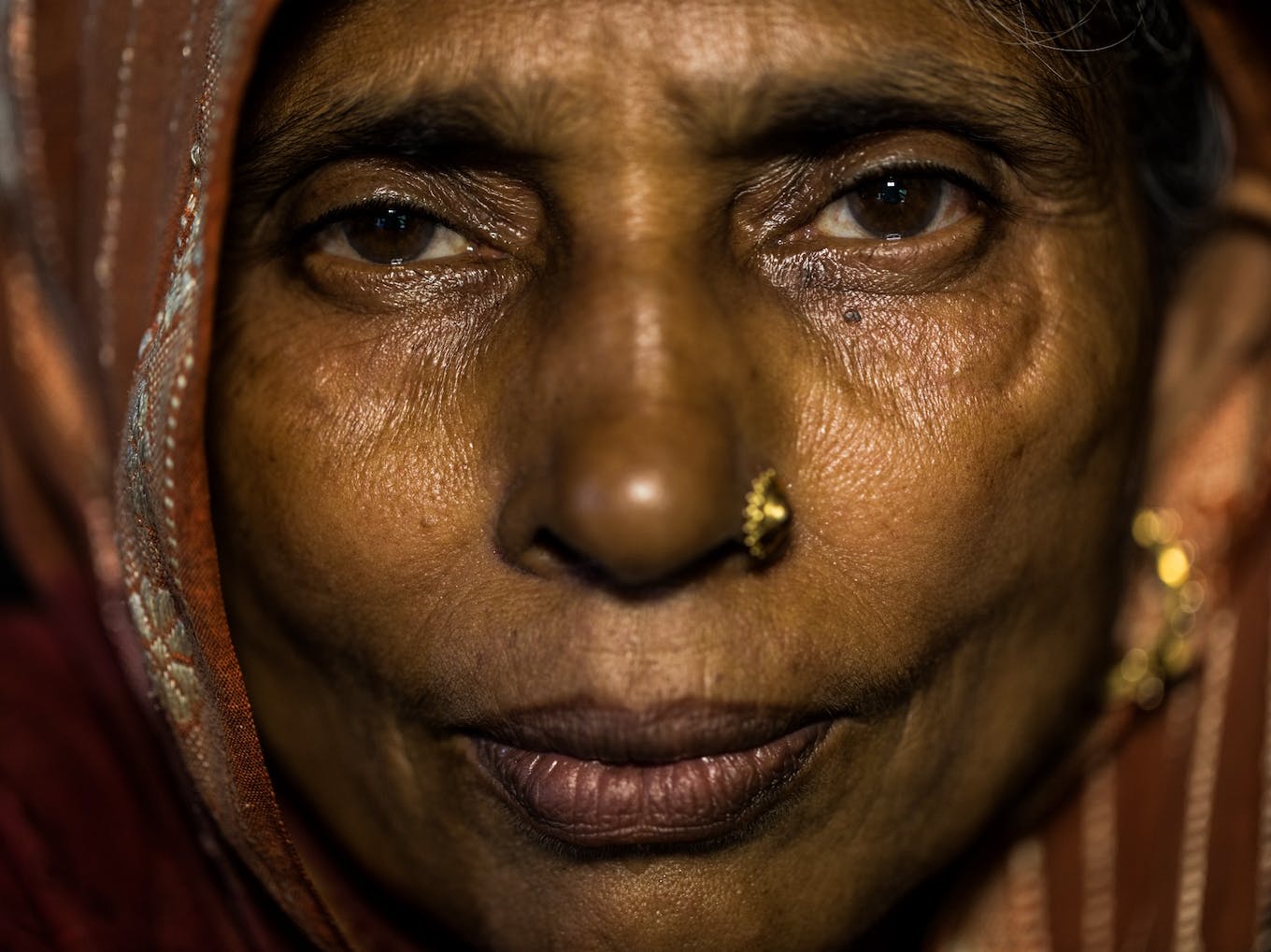 Things were better when my father and uncles were alive, when I was still unmarried. Although there was poverty, the environment was suitable for living. Now we have Cyclone Aila devastating us in one day….Cyclone Sidr is tearing us apart the next. Living in these conditions…makes us very worried about our children. Our sleepless nights pass with worries.

There is no certainty. Sometimes, we hear people saying the dam is collapsed, water-level is rising. And sometimes they come true. Sometimes, strong winds come from the south at night. In this current year, we packed up our bags and luggage four times.

We heard the water is overflowing. They told us to be prepared with dry food and baggage. Then we think, will we last this night? Will we see the daylight anymore?

We are old enough, but how will our children survive? We become lifeless. Not even interested in visiting our relatives, or getting anything prepared.

So my request to you is to look for a suitable way to save us. 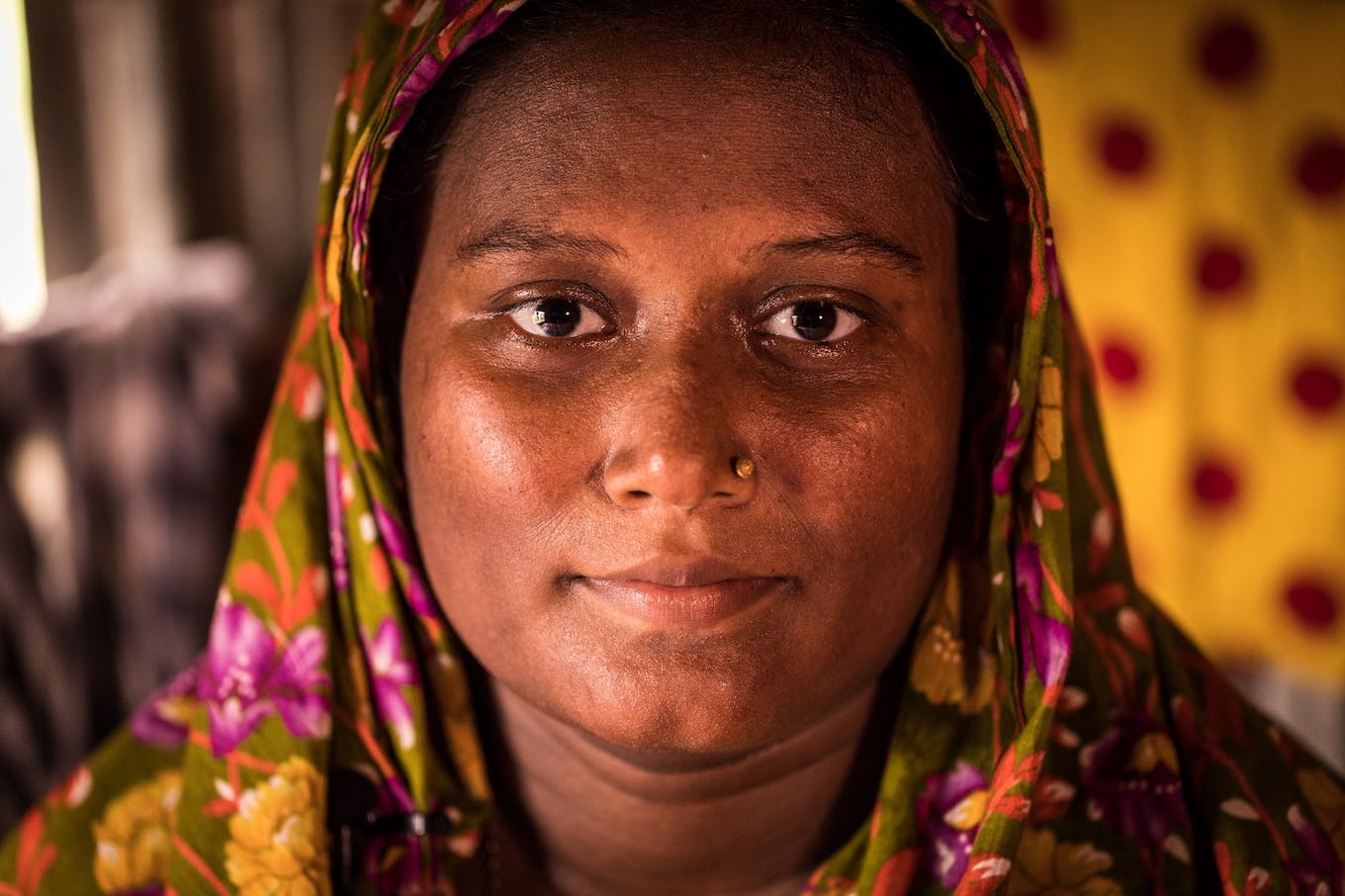 The heat has increased nowadays. The rainy season does not start timely. It starts raining when we don’t need it. And the heat does not decline even after rain. Not everyone will be able to tolerate the heat. 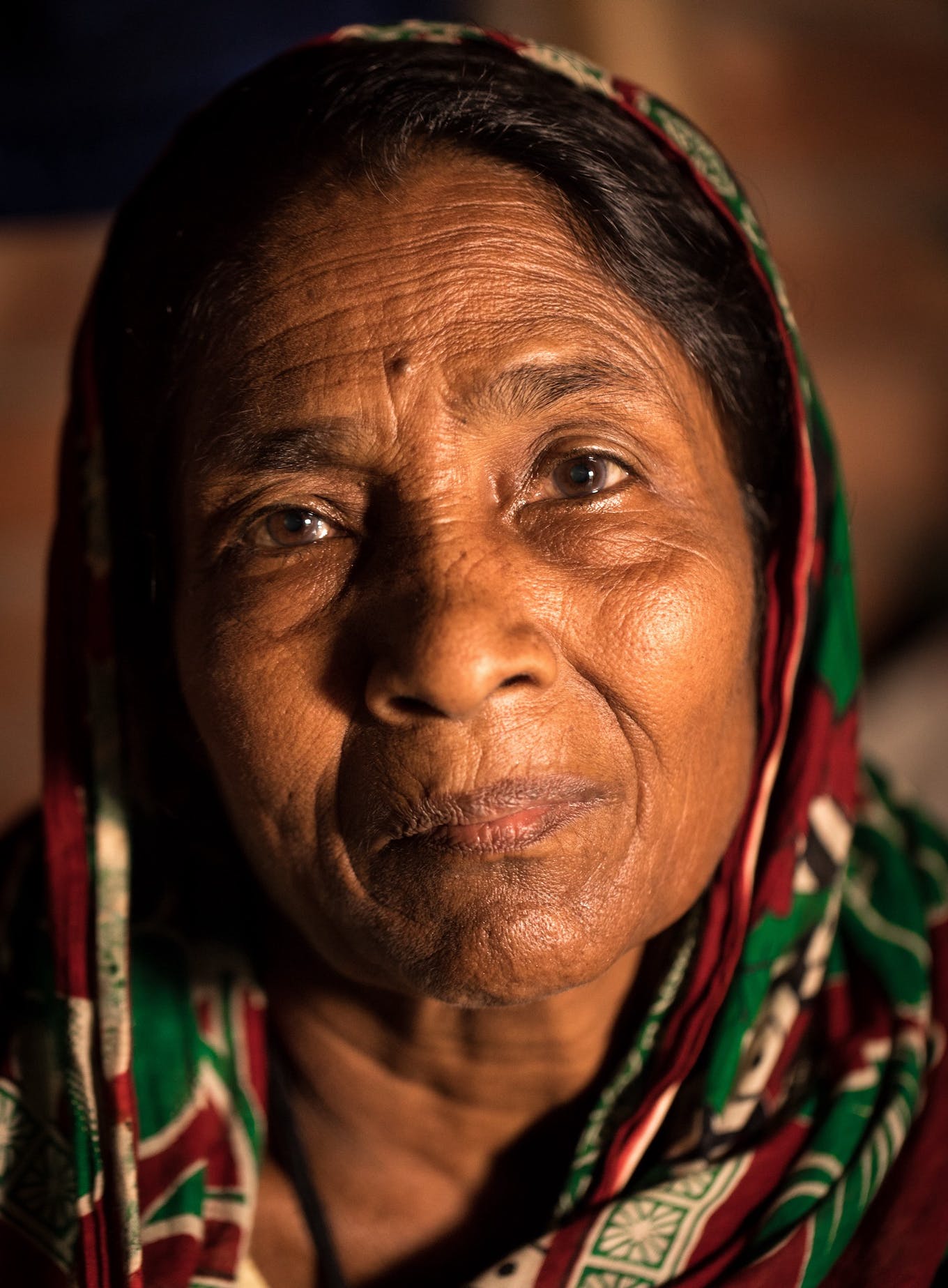 Renu Bibi isn’t sure of her age. She’s between 80 and 85. She speaks of the time after her husband’s death and after her home in Bhola was demolished by river erosion.

Our lands were taken away. I collected large tree leaves to make a tent, so [the children and I] could rest under it when the sun was hot. And we took shelter in other people’s houses when it rained.

Told there were more opportunities in Dhaka, she went there with her family but didn’t have enough money to rent a room. “We made a tent beside the road using papers and lived under it. I couldn’t manage my room rent working as a home servant.” She collected bottles, papers and metals to sell in order to earn additional money.

She married off her daughter — her friends helped bear the cost — but her son-in-law is also poor and unable to help. She still lives in the slums of Dhaka.

Remembering her past life, before her home was lost to erosion, Bibi said:

We had one to two hundred date palm trees, we made tons of sweets with those. We had coconut, jackfruit and mango trees. But the river took away everything. Our ponds were full of fishes. When the dam was broken… I cannot speak. My heart bursts with sorrows. 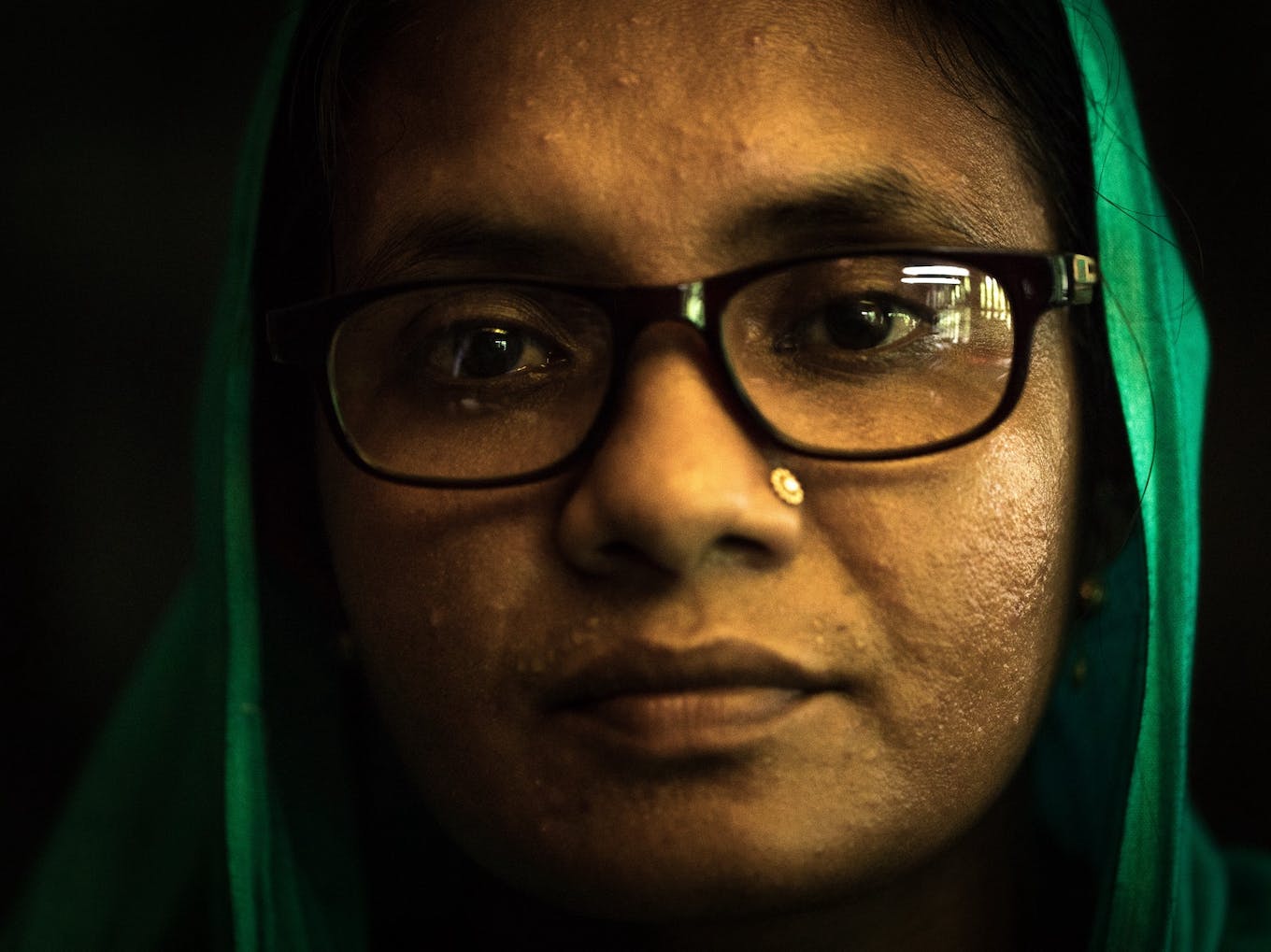 We have no safety to live here permanently. Fear has taken over our minds. The embankments are at risk. If any storm like Aila visits this place, there is a high probability that the embankment will be broken down. My request to world leaders is that our environment remain in good shape. My call to the developed world is that they should take care when it comes to us. We want a future where we can live peacefully with our children. 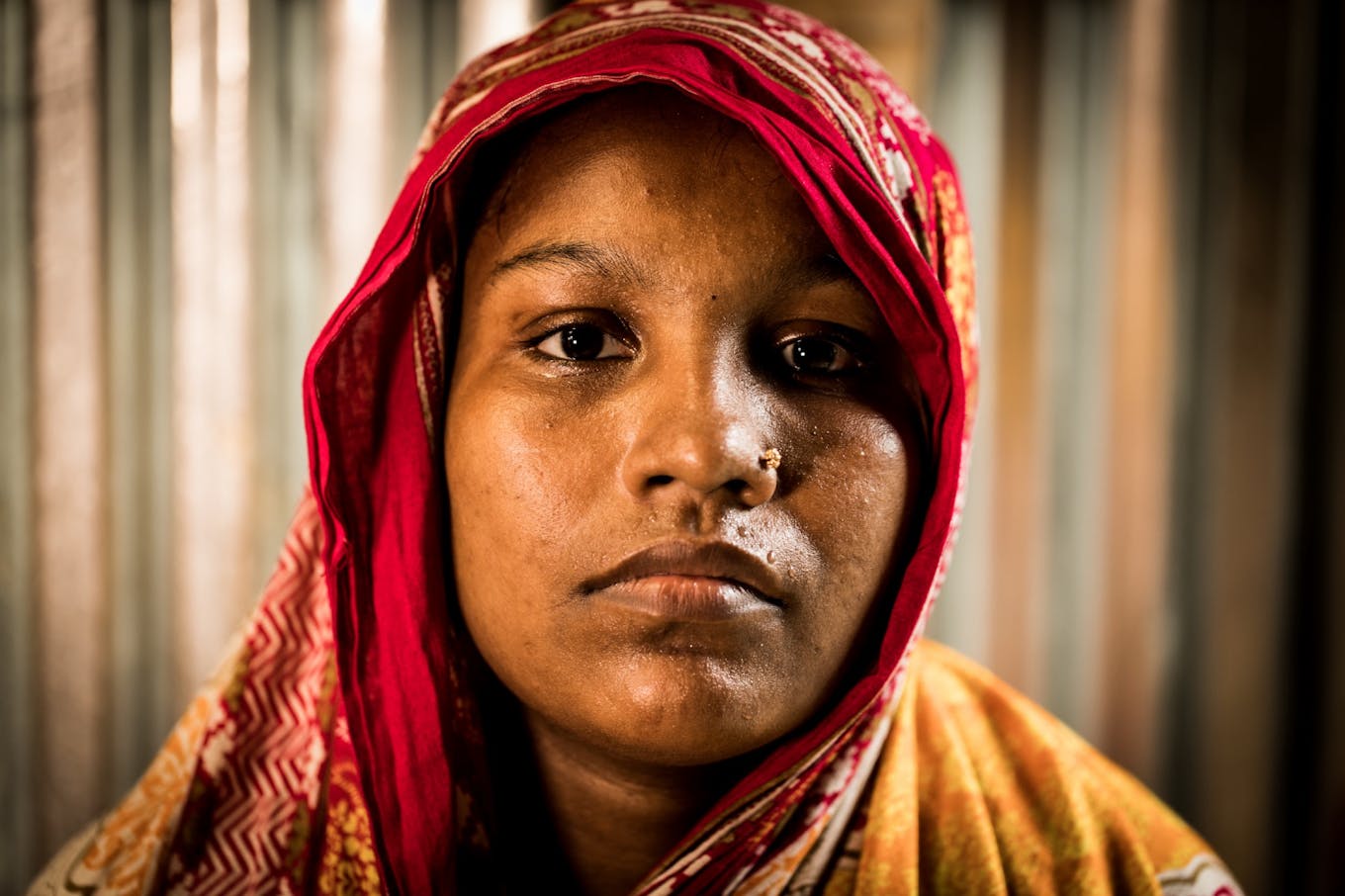 We had a house. We had cows, goats, chicken and duck. Our home was just beside the river. We thought it would never be washed away. We were dependent on the river for our livelihood. We used to catch fish. We had crops, not much, but enough to live on. 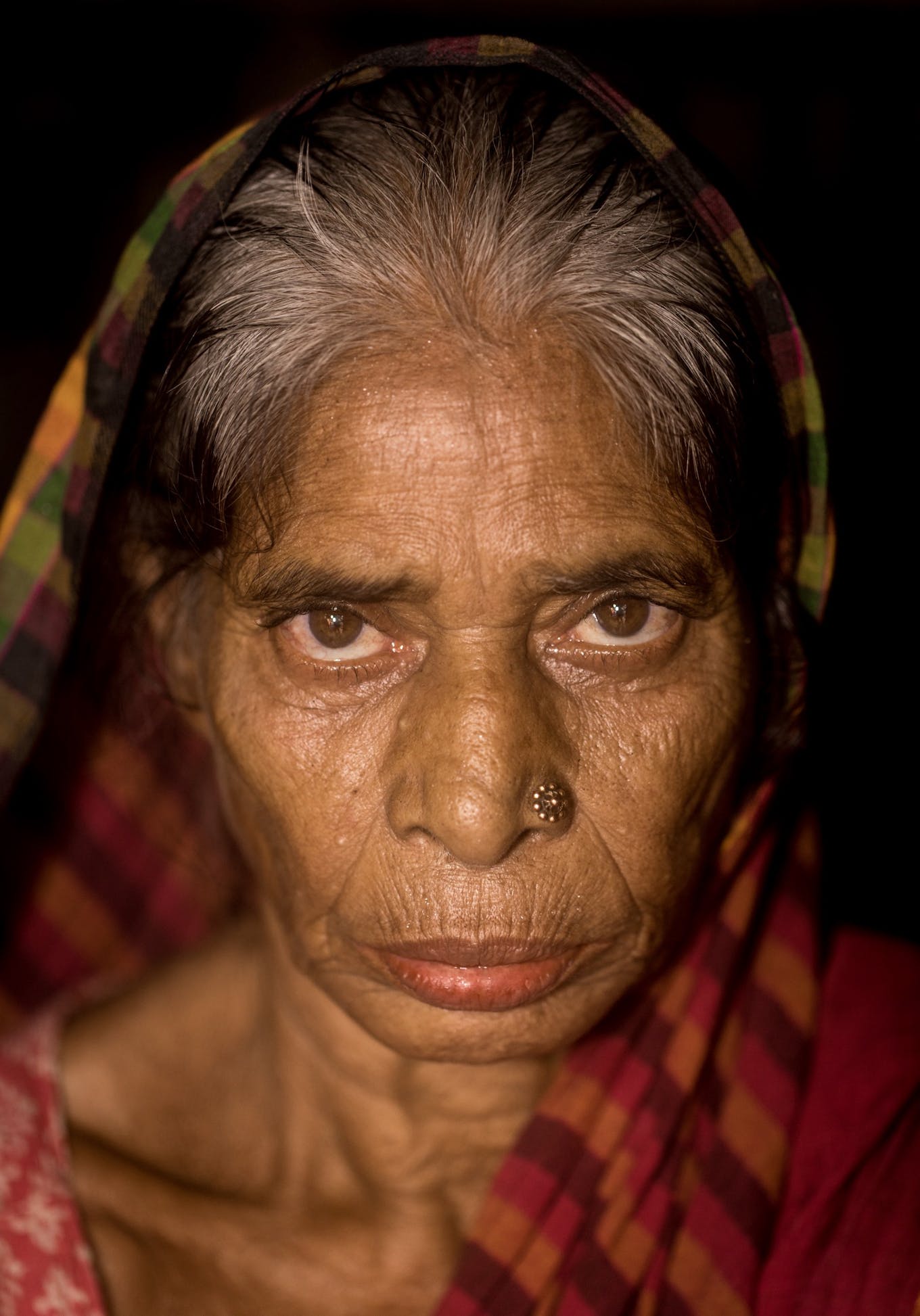 I have no house now. Everything was lost to river erosion. I have moved here after suffering much. I could not afford to buy food. He [my husband] left us, telling us that he was going abroad … he never returned. This kid was in my womb back then while he left us.

Marlene Cimons produced this report in cooperation with the Environmental Justice Foundation. This story was published with permission from NexusMedia.