Six months after the sinking of the Singapore-flagged X-Press Pearl off the coast of Colombo, local communities are trying to recover from one of the worst maritime disasters in history.

On a beach in Sri Lanka’s western coast on 7 February, a band of women painstakingly sift sand in the pelting sun, hunting for tiny plastic pellets and other debris still washing ashore since the X-Press Pearl sank in May 2021. Predominantly from the fisher community, they continue to bear the brunt of the island’s worst maritime disaster.

This stretch in Sarakkuwa, Pamunugama, 30 kilometres from Colombo, was the epicentre of the debris spill. Wave after wave of pellets, burnt plastic, even entire containers, washed up here. The wreck now lies offshore, ringed by salvage vehicles.

It’s a six-day week, from 8am to 2pm, with two 30-minute breaks. At 10am, the temperature is already above 30 degrees Celsius. They are sweltering under hats, protective clothing and facemasks. But it’s worth it, they insist. Their daily wage of Rs 3,000 (US$15) feeds families whose menfolk idled for months when expanses of sea were declared no-fishing zones.

The Marine Environment Protection Authority (MEPA), which oversees the clean-up, started the initiative in October and now supports 160 women across several sites. The challenge is enormous. When the group broke for tea two-and-a-half hours into the morning shift, they had filled half a large basin with pellets.

A nearby warehouse holds row upon row of sacks of pellets and other debris. The MEPA is still studying proposals for disposal, said Ravi de Silva, who works at the agency. “There is obviously a long term problem that will be around for years,” he sighs. 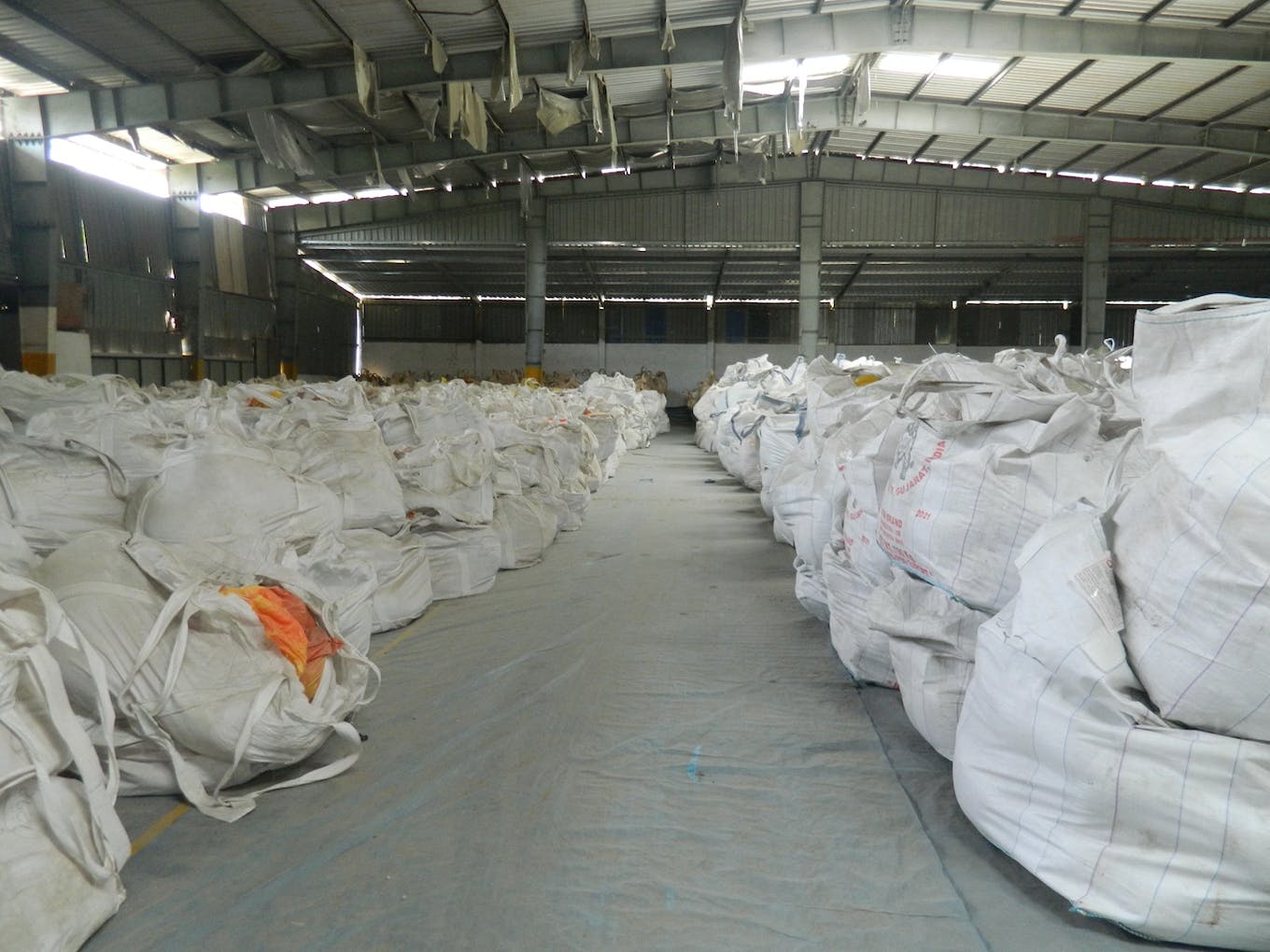 Sacks of debris collected from the sinking of the X-Press Pearl off the coast of Colombo. Image: Sandun Jayawardana

When it caught fire off Colombo’s coast on May 20, 2021, the Singapore-flagged X-Press Pearl was carrying tons of nitric acid, caustic soda, methanol, epoxy resins and low-density polyethylene pellets, among other chemicals and goods. It burned for 12 days and, on 2 June, sank while being towed to deeper waters. At least some of its 348 tons of bunker oil leaked into the sea.

It was the height of the monsoon. Rough seas caused the pellets—or nurdles—to be buried deep in the sand. At first, there was so much debris that some locals collected and sold them. A sack of pellets could fetch around Rs 2,000 (US$10) until the authorities cracked down.

The nurdles are the “biggest headache”. When the south-west monsoon breaks in May, hordes more are expected to wash up. Increasingly discoloured and deformed, there is fear they might disintegrate, said Muditha Katuwawala, coordinator of the volunteer-based conservation group The Pearl Protectors (TPP). Its ‘Nurdle-Free Lanka’ campaign has collected over 1,500 kilograms of plastic debris since July.

The TPP did an underwater survey, though they couldn’t get too close to the wreck, and are planning several more. More algae were observed—a likely result of nitric acid, urea and other chemicals—but it was difficult to draw a direct correlation with the ship as researchers lacked baseline data from previous years, Katuwawala said.

Environmentalists are frustrated by state agencies withholding data. Oil leaks from the vessel started in early June. The extent of this damage hasn’t been disclosed. Over 470 carcasses of marine mammals washed up along the western coast in the immediate aftermath—417 of them sea turtles. Post-mortem results are still unavailable. In early February, the government waffled that foreign laboratories were analysing samples. 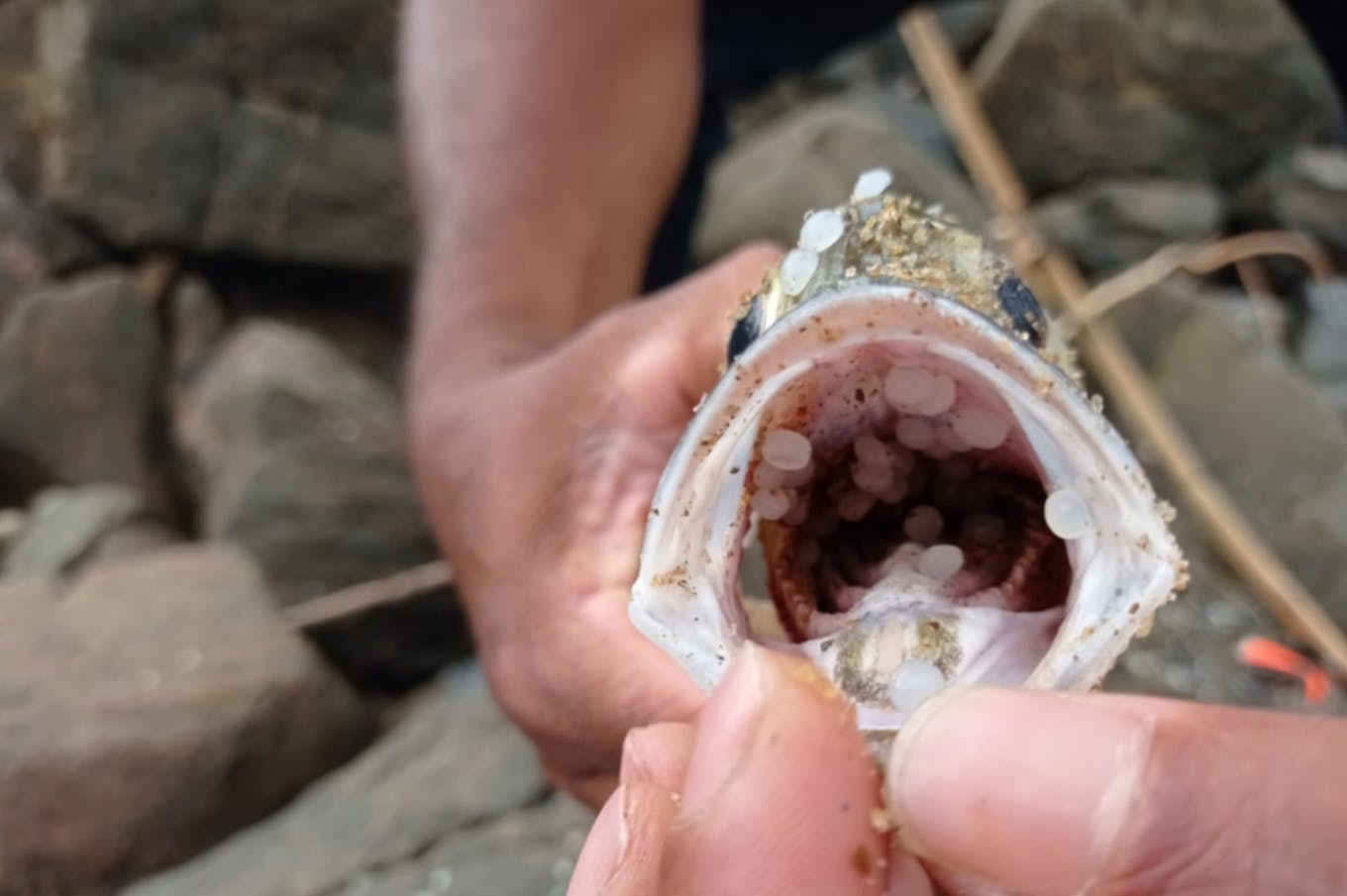 “There is zero transparency,” Katuwawala said. “It’s frustrating because this is not just a national disaster. This is one of the worst maritime disasters the world has seen.”

One reason the government is cagey could be concerns that publicly releasing information could hinder legal proceedings against the ship’s operators. Katuwawala accepts there is a court case.

“But the government should take the side of the people and the country and be transparent about impacts and the level of disruption this has caused, not only socially, but environmentally and in all other aspects,” he maintained.

In the seaside town of Negombo, 35km from Colombo, fishermen fume over compensation. No-fishing zones initially extended across three districts of the western province. Some restrictions remain in two districts pending debris clearance. But fishermen outside designated areas were also hit as drifting debris damaged nets and equipment.

In July, X-Press Feeders paid an initial US$3.7 million to Sri Lanka’s treasury. The government said the bulk will go into fisheries with the rest covering the firefighting costs of official agencies. Some fishermen reject the settlement scheme.

“We don’t know the compensation criteria, how much of the funds was spent and is left, how many were paid and whether everyone who deserved it has been compensated,” said Aruna Roshantha, 51, president of the All Ceylon Fisheries Trade Union “Even fisheries officials claim ignorance.”

Variation compensation has created friction. The owner of a small fishing boat gets Rs 15,000 (US$74 and multi-day fishing trawler, up to Rs 80,000 (US$395). Payments for boat owners and crew members differ widely. “After the first round of disbursement, the authorities have told us nothing,” Roshantha said. “It’s frustrating.” 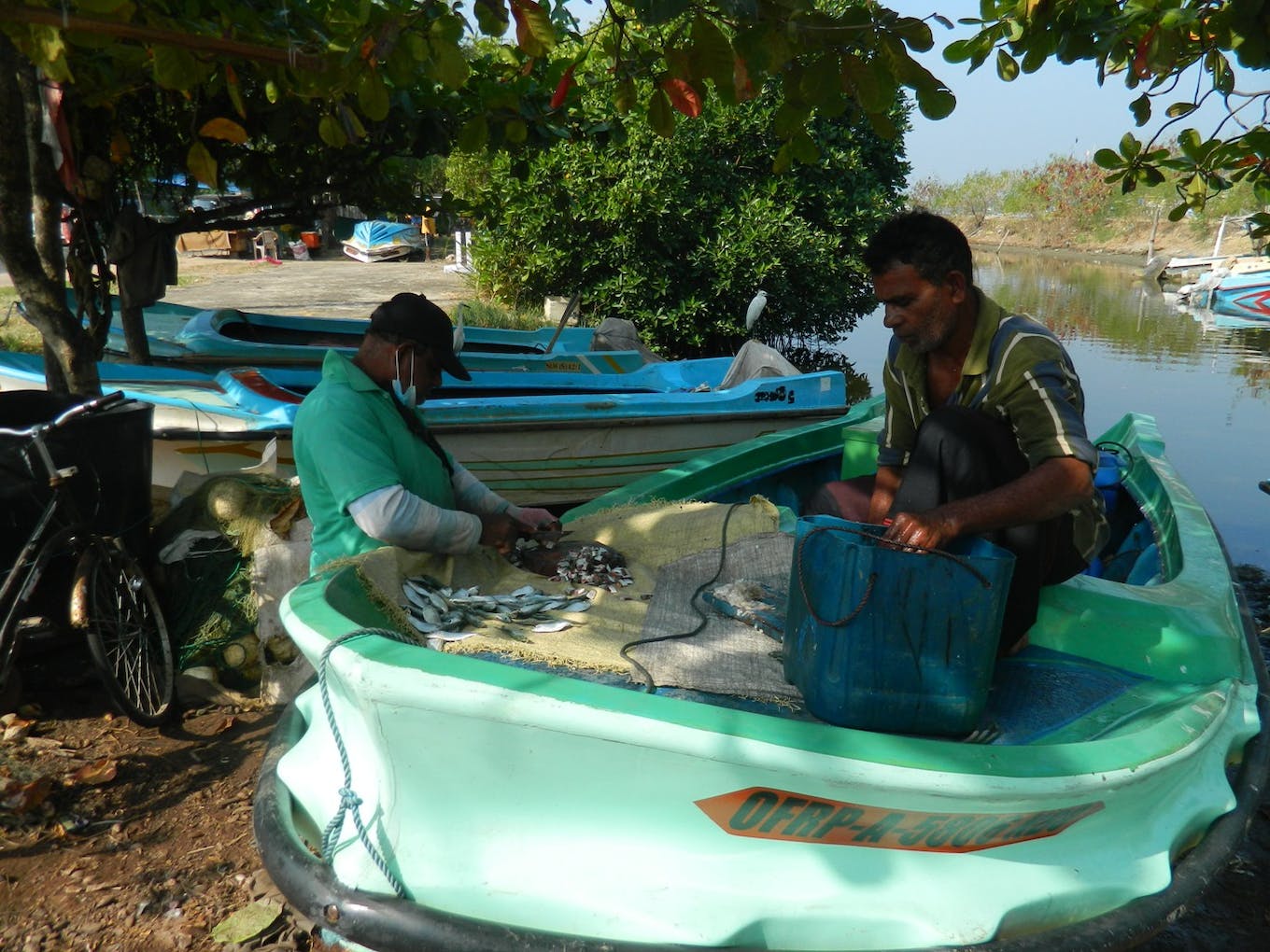 Fishermen are unhappy about compensation from the spill. Image: Sandun Jayawardana

A technical committee of officials, local fisher associations and Catholic clergy from the area (most inhabitants are Catholic) studied the claims, a fisheries ministry official said, on grounds of anonymity.

“We have done our best under the circumstances to obtain maximum compensation for fishermen,” he asserted. “It’s ongoing and subject to how much funds we receive and when.”

On February 6, the government confirmed it had received a further US$ 1.75 million from X-Press Pearl insurers as an interim payment to assist affected communities. A team from the insurers is expected in the country to further process claims.

Locals continue to suffer. Amalan Arul, 48, and Peter Fernando, 55, from Negombo claimed their catch was noticeably smaller since the disaster. In the months after the calamity, seafood sales also plummeted over contamination fears.

“The first six months were terrible,” said Marie Dilrukshi Fernando, 39, a roadside fish-vendor. Her husband couldn’t work as his nets were shredded by debris. And customers wouldn’t buy fish after images of dead fish with pellets inside circulated. Fisher associations campaigned hard to dispel fears. Roshantha’s group even cooked and consumed fish in front of media at the local market. Today, there is no shortage of customers. But the lower catch meant prices have shot up.

TPP is trying to research whether marine life has moved away after the disaster. “It is difficult to understand because, again, there’s no baseline data,” Katuwawala pointed out. “There are government agencies with the capacity to do this. We hope that at least this year they will compare the data.”

Sri Lanka’s beaches are a major tourism pull and there were fears pollution would deter visitors. Fortunately, it happened off-season and also during strict Covid-19 movement curbs. So the pandemic hit the industry more than the catastrophe did, said Pradeep Malinda, a hotel worker in Negombo. 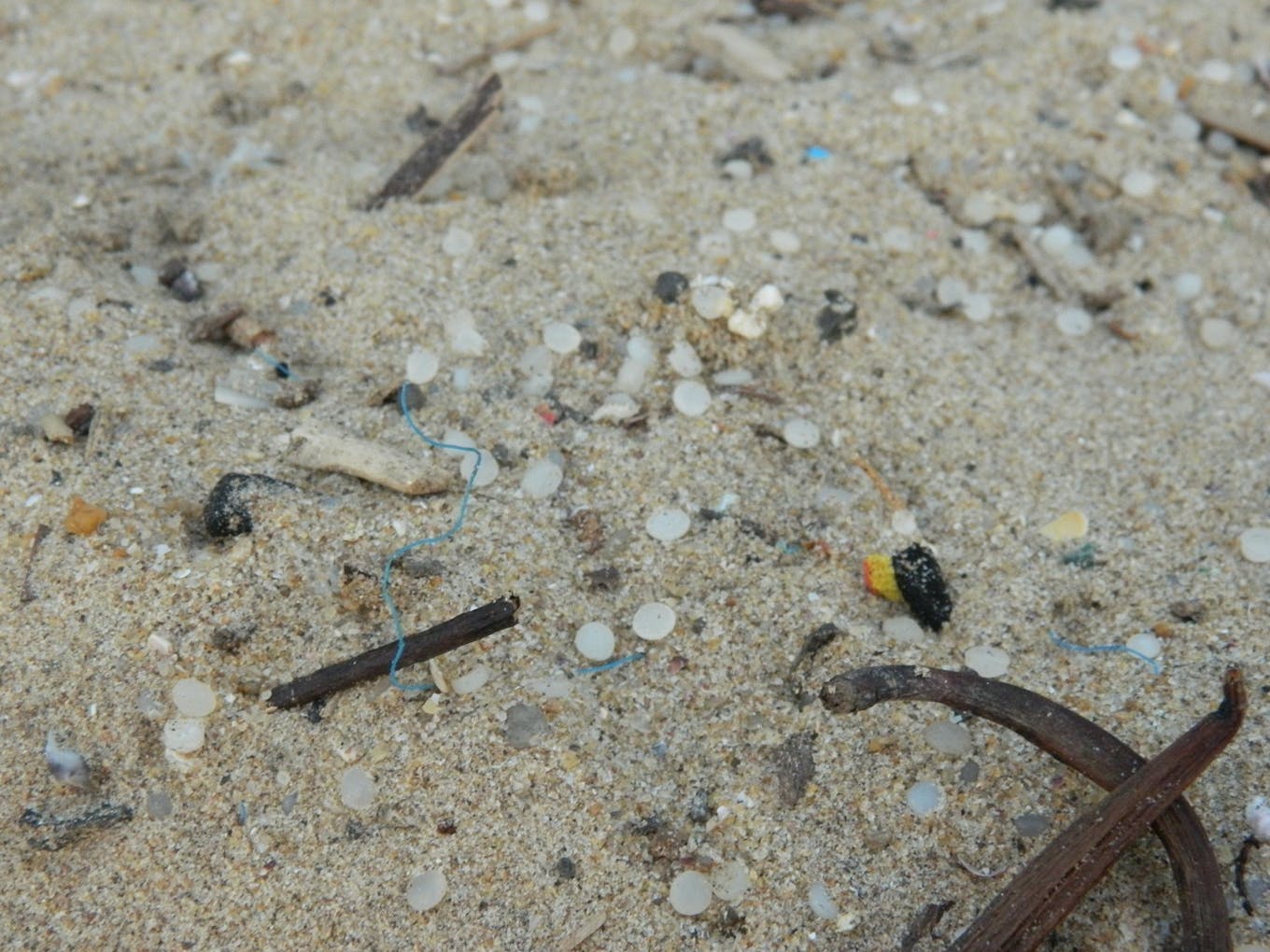 Malinda’s hotel reopened only in November, after nearly a year’s closure. By then, the bigger debris had been cleared while nurdles and smaller remains were buried in sand. Tourists are returning. M. Shanthikumar, President of The Hotels Association of Sri Lanka, agreed: “We were spared the impact as most hotels were closed due to the pandemic.”

Authorities must ensure that there is minimal fresh pollution during salvage and refloating of the wreck, insisted Professor Terney Pradeep Kumara, an academic who was MEPA general manager when the ship sunk. He has since left. Another expert panel is working to measure the damage in monetary terms.

Research teams are now collecting data on the environmental fallout, Kumara said. Given its scale, he predicts chronic long-term damage. He is particularly concerned about biomagnification — the accumulation of toxins and pollutants in organisms at successively higher levels in the food chain. In time, people might be consuming fish subjected to this process.

Officials claim they are now better prepared to respond to similar events. The warehouse in Pamunugama has a separate section filled with oil spill response and beach clean-up equipment, mostly donated by foreign countries and agencies. 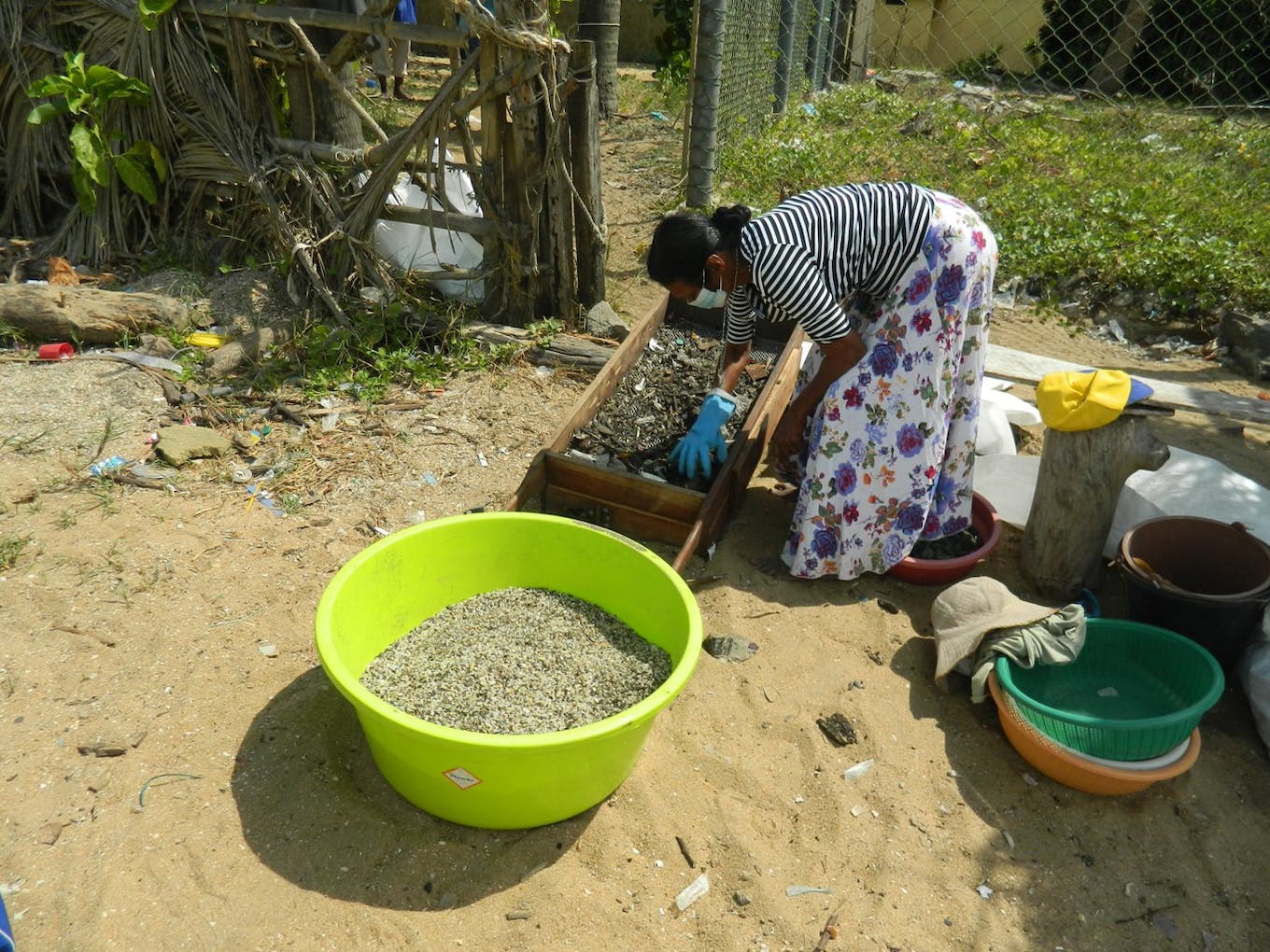 A woman stoops as she sifts debris from Sarakkuwa Beach in Pamunugama. Image. Sandun Jayawardana

Much remains to be done. A National Audit Office report in September revealed that Sri Lanka has still not introduced legislation to fully implement the International Convention for the Prevention of Pollution from Ships, known as the MARPOL Convention, although it was signed in 1997. It also said there was no national policy on preventing maritime pollution by ships.

MEPA officials respond that an expert committee is now studying a draft amendment that contains several legislative changes. Once their recommendations come in, the bill will be sent for Cabinet approval.

A new kind of spill

The  X-Press Pearl sinking is a new type of spill that could become more common as the US$1.5 trillion commercial shipping trade proliferates at a rate of 2 per cent a year. A recent report by Swedish non-profit International Pollutants Elimination Network (IPEN) warned that regulations for the transport of toxic chemicals and plastics are out of date and in need or urgent revision to curb future spills.

About 1,000 containers are lost at sea every year and fires on ships are reported every other week, but regulations focus on the prevention of oil spills, less so complex mixtures of chemicals and plastics that are increasingly found on container ships. The International Maritime Organization, the regulatory body for the shipping trade, estimates that more than half of freight transported at sea can be regarded as harmful to the environment, although plastic pellets are not classified as harmful substances.

One lesson from the X-Press Pearl disaster is dealing with the leaking containers that are believed to have led to the fire with due urgency. A leak of nitrous oxide was known nine days prior to the fire, and two ports have been reported to deny the ship offloading the leaking containers. Failure to treat chemical cargo with the necessary concern will “continue to cause catastrophes putting the lives of crews, coastal communities, and marine ecosystems at risk,” the study read.

Two months after the X-Press Pearl fire another ship in Port Colombo also had a leak of nitric acid, which was discovered on its way to the harbour. In that case, the captain notified the local agents of the leak, who notified the harbor master, and disaster was prevented.