Southeast Asia’s sinking cities: can they be saved?

Climate change is just one of the causes of severe flooding in Jakarta and Bangkok. Subsidence and over-construction also contribute to the slow drowning of these and other Asian capitals. There are solutions, but they are hampered by lack of funds, politics, cultural issues and obstructive legislation.

In March 2022, Pei-Chin Wu, Meng (Matt) Wei and Steven D’Hondt published a report on subsidence in coastal cities around the world in Geophysical Research Letters. The authors noted that subsidence contributed more to the sinking of cities than rising sea levels and that many of the fastest sinking urban centres were located in Asia.

Jakarta frequently tops this list, but yearly, worsening flooding in Ho Chi Minh City, Manila and Bangkok are a harbinger of things to come. By 2050, some urban centres in the region may be permanently semi-flooded.

Both Jakarta and Bangkok have been flooding for hundreds of years. Jakarta is built on soft soil amidst a delta of thirteen rivers, while Bangkok is located on a flood plain. Old maps of the Thai capital show a network of waterways. Annual floods were part and parcel of daily life in both cities. But times have changed.

Yudhistira. S Pribadi, a flood analysis consultant at the World Resources Institute in Jakarta, explains how the erstwhile natural flooding of low-lying plains has morphed into catastrophe.

“There are three elements to consider when we look at urban flooding. We need to take into account what happens in the atmosphere, how extreme the rainfall in a certain area is. That’s related to climate change. Secondly, Jakarta has been an economic powerhouse since the 1970s and the more buildings that come up, the fewer green areas there are, the less rainwater seeps into the soil and turns into run-off instead. And finally, the massive extraction of groundwater has led to land subsidence.”

Bangkok needs to use 30 per cent of its land to retain flood water. But the rich land-owning families don’t want green areas to offset the water.

More than 2,000 kilometres further north, Bangkok shares some of those challenges. Dr Thongchai Roachanakanan, the former director of Thailand’s Department of Public Works, Town & Country Planning, who now lectures on urban climate adaptation, traces the origins of annual flooding to the Thai capital’s unique location and decades of developmental neglect. “Thailand’s first king founded Bangkok because the soil was good and the Chao Phraya river offered transport opportunities. But Bangkok’s first road wasn’t built until the reign of Rama IV and a road master plan wasn’t developed until the 1950s, when the city had a million inhabitants.”

Dr Thonchai bemoans the fact that core features of the city have changed in the past half century.

“The canals and waterways have disappeared. In the 1960s and 70s, the government did not provide an adequate water supply, so people started pumping water from the ground, which contributes to the city sinking. By 1980, Bangkok’s population had tripled and the need for space increased drastically.”

Successive governments have done little to counteract unfettered development and there was little debate about flooding until 2011, when significant parts of the city, including Don Mueang airport, were underwater for weeks. With renewed floods this year, the subject has become a political hot potato.

“The biggest challenge for Bangkok’s new governor is how to protect the city,” Dr Tongchai says. “Waiting for decisions by the central government takes too long.” 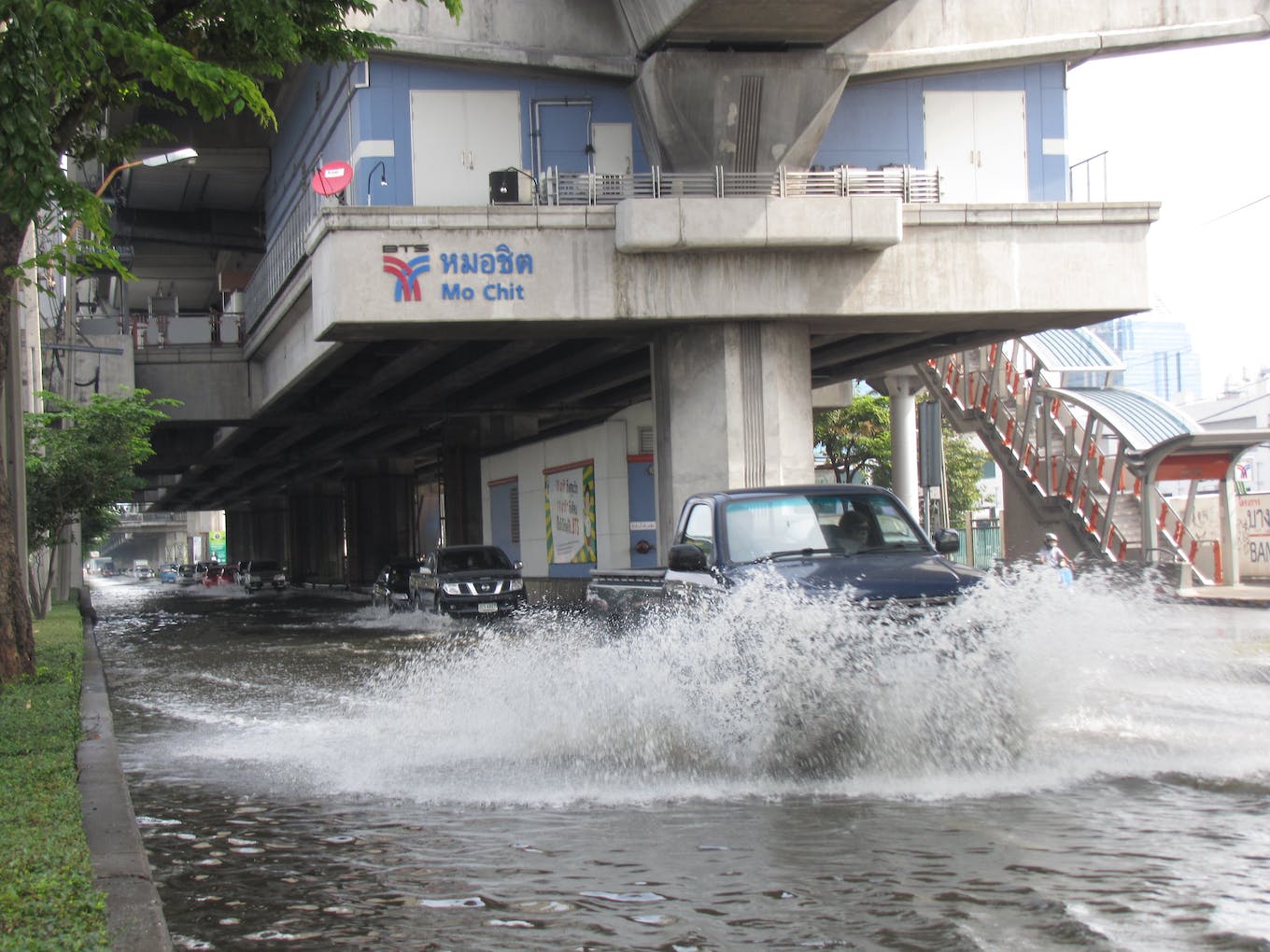 Flooding of Mo Chit station, the most northern station on the Sukhumvit line, Bangkok, in 2011. Image: Mathias Eick/Flickr

Dr Tongchai argues that the main diversion channel that drains water into the sea to the east of Bangkok is insufficient. “It was completed seven years ago, but it is too small. With the district of Samut Phrakan just 20 cm above sea level and Bang Kapi [another district in Bangkok] even lower at sea level, two more diversion channels are needed to save the city. If sea water comes into Bangkok, areas like Bang Kapi will be submerged.”

But large technological solutions cost a lot of money. Following the 2011 floods, the government increased funds for flood prevention to 10 per cent of the city’s budget, but it’s been decreasing since.

“The drainage system in Bangkok was designed to function for 25 years. That’s not enough. We need a 200-year system to save the city from flooding every monsoon. The city actually needs to use 30 per cent of its land to retain the flood water. But the rich land-owning families don’t want green areas to offset the water,” says Dr Tongchai.

Given that the flood waters during the monsoon spread over an area of 1,500 square kilometres around the Thai capital, water management is a question of jurisdiction that reaches beyond the governor’s power.

“Only the prime minister can make the kind of budgetary decisions that would make a difference,” Dr Tongchai says.

Politics also hamper solutions in Jakarta. Victor Coenen is the flood specialist at PT Witteveen+Bos Indonesia, a company that has long been working with both the Indonesian and Dutch government to find technical solutions to flooding in Jakarta and other cities in Indonesia.

“In 2011, there were plans to extend the city into the sea, to build artificial islands that would solve housing, infrastructure and connectivity issues. The islands were going to be a huge source of revenue for the government, part of which was to be invested in a big sea wall, following in the footsteps of Venice and the Netherlands. But there were funding problems and the city’s new governor felt that this would only benefit the rich and destroy fishing grounds. The current strategy to protect Jakarta from flooding is to upgrade the existing sea wall, which will provide sufficient flood safety for another 15-20 years. That’s a slow process, as it disturbs the communities who live on top or next to the sea wall.”

Coenen is skeptical about plans to move the capital to Kalimantan on Borneo.

“Transferring the administration somewhere else does not mean the economic centre will follow. Companies, financial and legal services would have to move, but everyone wants to live in Jakarta. People might decide to commute by plane and impose an even bigger environmental strain on the country. Moving a capital is not easy.”

For now, Jakarta is taking temporary measures to buy time. “Upgrading the 110 km existing sea wall will cost around US$2 billion. If subsidence cannot be controlled in the coming years, the offshore sea wall may be necessary in 15 years. Such a wall would cost around US$4-5 billion. Of course, there are other infrastructural necessities, such as revamping the drainage system in the city, upgrading the water supply system, cleaning all the water, and more. The long-term cost could easily be double,” says Coenen.

As Jakarta and Bangkok continue to flood while politicians wrangle, more modest, temporary solutions that help at the local level are one way to go forward. Singapore-based FlexBase International designs and manufactures sustainable floating infrastructure made from EPS and concrete. The company has constructed floating buildings in the Philippines and Bangladesh. In Kalimantan on Borneo, FlexBase built a floating dock for water planes.

People in Southeast Asia assume that if you live on water, you are poor.

FlexBase’s owner, Jan Willem Roël, suggests putting floating and amphibious constructions behind Jakarta’s sea wall. “You can take down 100 houses and build a float in their stead. That would work out at 400 Euros (US$429) a square metre — a lot of money for Indonesia. So there has to be government help.”

But working in Jakarta has proven to be a challenge.

“In Indonesia, in general, floating is not allowed,” Roël says. “If you give one person permission to build a floating structure, there will be many more within 24 hours. No one will control it.”

Aside from a myriad of regulations and financial challenges, cultural mores do not endear people to living on floating structures either.

“People in Southeast Asia assume that if you live on water, you are poor.”

That’s why FlexBase International has moved into food security and hospitality.

“There were plans to create artificial land on Singapore’s east coast. But the sea is deep there and putting in sand is expensive. So, it’s better to build a wall and put floating structures behind it. We are looking at green houses, fish farms and restaurants. We are also looking at the same kind of projects in Bangkok. There are many areas where water could be stored and released to alleviate flooding, and where structures could be built on top.”

In Jakarta, similar innovative techniques are already being used to alleviate flooding in local communities. Pribadi says that the government is shifting its efforts in flood management strategy towards nature-based solutions, primarily through building multi-function parks that can be used to temporarily store flood water. “These small-scale efforts can be part of a hybrid solution – they are able to retain water that isn’t contained by our walls, thus reducing peak discharge,” he says.

Improved communication between stakeholders is key, Roël says. “As the climate situation is worsening, public policy cannot afford to delay for years. Collaboration between government, business and civil society to inform good regulation in climate tech is needed.”