‘Solutions, not spats like this’: Food innovators' take on plant-based burger brand Lightlife’s campaign against Impossible Foods and Beyond Meat

A shorter ingredient list does not mean a product is healthier and better. Additives can improve quality. Consumers should also know that animals are often injected with chemicals in industrial farming, experts said.

Food innovation experts have come to the defense of plant-based burger makers Impossible Foods and Beyond Meat, following a marketing campaign by competitor Lightlife Foods against both companies’ “hyper-processed” products.

In an open letter this week, United States-headquartered Lightlife—whose plant-based burgers, sausages and other products are sold in the US and Canada—declared it was making a “clean break” from Impossible and Beyond for the latter’s attempts to “mimic meat at any cost”. 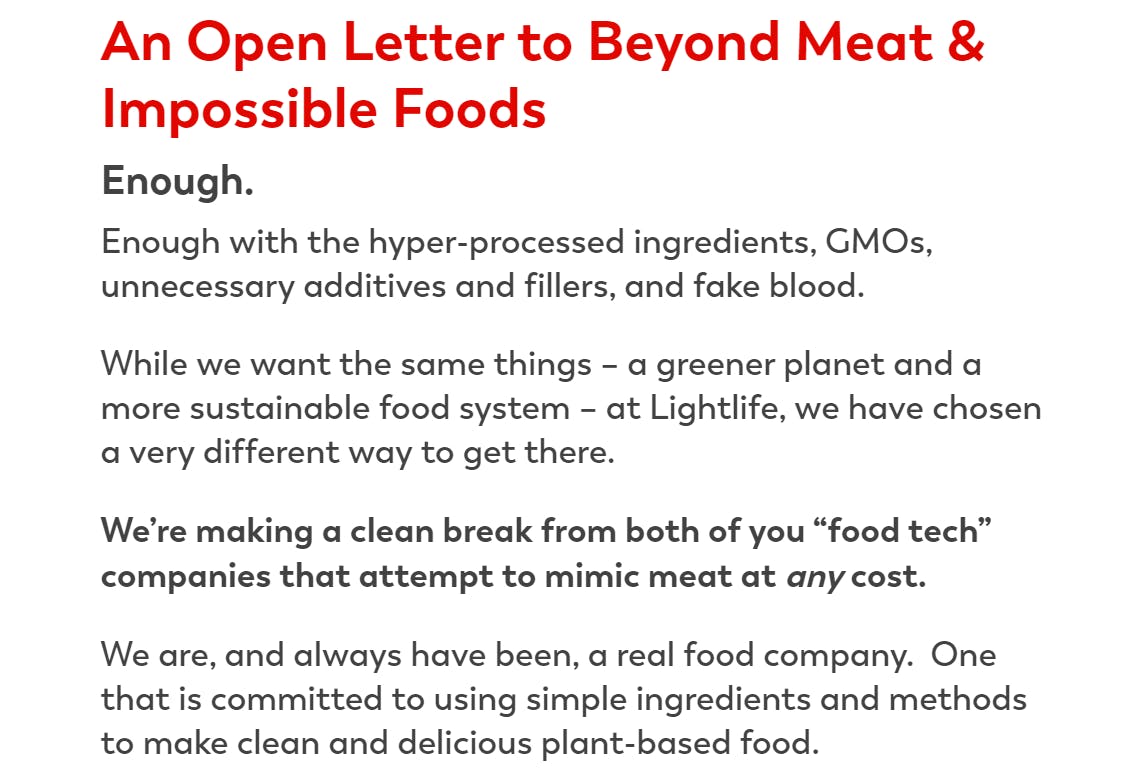 He also contrasted Lightlife burgers’ 11 ingredients with the 18 to 20 that Impossible and Beyond use.

The campaign swiftly came under fire from consumers and vegan chefs, who felt Lightlife was going after the wrong companies and that its ingredients do not differ significantly from its rivals’. Lightlife is also owned by a subsidiary of Canadian meat giant Maple Leaf, they noted. Plant-based proteins have grown in popularity in recent years as they incur a much smaller carbon footprint than real meat, but taste increasingly like a beef patty, chicken filler or minced meat.

The number of ingredients in a product is irrelevant and what matters its quality and nutritional value, said its communications staff Keely Sulprizio and Rachel Konrad.

“Heme”, the key ingredient in Impossible’s patties that gives them a meaty flavour when cooked, is thoroughly safety-tested and considered safe by the US Food and Drug Administration, they added.

“Things are always a lot more complicated than what they appear on the surface.  Food manufacturers tend not to (or not be able to) list 100 per cent of all their ingredients due to trade secrets and lots of other complicated reasons. Just because Lightlife’s ingredient list is shorter, does not mean it is healthier and better,” he said.

A number of ingredients would have gone into the “natural flavours” that Lightlife lists as one of its burger ingredients, for instance.

“And if you really find a 100 per cent healthy plant-based burger, chances are, you won’t like the taste and texture of it,” added Wang, who also founded US plant-based seafood firm Sophie’s Kitchen.

“I had some of those very, very natural plant-based burgers in some restaurants while I was in California. I can only tell you the texture and quality is definitely not for meat eaters.  And their price will make it even harder to go on sale in supermarkets.”

Food manufacturers tend not to (or not be able to) list 100 per cent of all their ingredients due to trade secrets and lots of other complicated reasons. Just because Lightlife’s ingredient list is shorter, does not mean it is healthier and better.

There are some consumers who think plant-based meat and seafood is too processed, but Wang said they belong to the new generation of processed food aimed at achieving environmental sustainability and better health. They are unlike the first generation of processed food that first appeared in grocery stores after the Second World War, that mostly aimed to cost as little as possible.

As for people who think real meat and seafood are clean and healthy because they do not have an ingredient list, Wang noted that farmed animals are typically injected with various chemicals in industrial facilities in their lifetime, and more chemicals are applied after they are slaughtered. Wild-caught seafood would also have ingested pollutants such as heavy metals and microplastics before ending up on dinner plates, he said.

“If all these things can be accounted for, that list will just be as long as (if not longer than) what is listed by Impossible Foods or Beyond Meat,” Wang said.

Alternative proteins rely on enhancements because they are trying to mimic meat, said Dr Dalal Al Ghawas, programme director at Big Idea Ventures, an alternative protein venture capital and accelerator firm. Terms like GMO and additives may sound harsh and unappealing to the average consumer, but she said there is no scientific evidence to date that a genetically modified product will lead to adverse health effects, just as there is no conclusive evidence that people who consume organic products have significantly less risk of developing chronic disease.

From a food technologist’s perspective, we know that if there’re fewer additives, then there is going to be also compromised quality and shelf life stability.

There are many types of additives and they should not all be lumped together negatively, said Al Ghawas, who has a PhD in food science and food biotechnology.

With the majority of people living in cities and farming done outside of cities, food needs to be processed to extend their shelf life and to give products the right textures and properties, she said. “From a food technologist’s perspective, we know that if there’re fewer additives, then there is going to be also compromised quality and shelf life stability.”

What Impossible has done with heme, is to utilise something readily available in nature and expand it into a food category, she added.

While caution and scepticism of new products is good, plant-based companies also need to ensure they effectively communicate what they’re producing, and make the information very relatable for wary consumers, Al Ghawas said.

Both she and Professor William Chen, the Michael Fam Chair Professor in Food Science and Technology at Nanyang Technological University, believe that Lightlife’s campaign will have little impact on consumer demand for plant-based protein, as well as for Impossible’s and Beyond’s burgers.

There is now more awareness of zoonotic disease outbreaks, and the volatility of meat prices as a result of diseases such as African swine fever and Covid-19 will mean more people seeking out alternative proteins, said Al Ghawas.

Chen believes there is a need for synergy among different plant-based players to widen the choices available for consumers, perhaps through different products that target different nutrition requirements.

Said Wang: “What we need now are solutions for our current and future problems, not spats like this.”