The majority of these savings were in China, Japan, India, Vietnam and South Korea. Countries like the Philippines and Thailand which lag in solar capacity have also avoided millions in fossil fuel spending, new research shows.

Solar generation helped seven Asian countries avoid US$34 billion in fossil fuel spending in the first half of 2022, amid soaring gas prices, according to a new study.

China, India, Japan, South Korea, Vietnam, the Philippines and Thailand saved fossil fuel costs equivalent to 9 per cent of total fossil fuel costs in these countries between January and June, found a report jointly published by London-based think tank Ember, the Centre for Research on Energy and Clean Air, and the Institute for Energy Economics and Financial Analysis.

“Asian countries have shown that rapid solar deployment is possible, setting a remarkable example and providing valuable lessons for their peers in the region,” said Dr Achmed Shahram Edianto, electricity analyst, Ember Asia. “As the prices of solar and storage plummet, and the potential cost savings are starting to materialise, solar dominance in Asia now looks set to come much sooner than previously expected.”

China, which has the greatest solar capacity in the world, had the biggest savings of about US$21 billion, as solar met 5 per cent of its total electricity demand.

Japan saw the second largest contribution with US$5.6 billion in avoided fuel costs thanks to solar power generation alone, which reached record levels for the country in May.

As the prices of solar and storage plummet, and the potential cost savings are starting to materialise, solar dominance in Asia now looks set to come much sooner than previously expected.

In India, where the high price of coal is one of the main factors in its ongoing power crises, solar generation helped avoid spending of US$4.2 billion in fuel and the need for an additional 19.4 million tonnes of coal that would have further stressed its already strained domestic supply.

South Korea, which had a 5 per cent generation share in solar, saved US$1.5 billion.

Vietnam, on the other hand, had close to zero terawatt hours (TWh) of solar generation in 2018, but it has reached the point where solar power accounted for 11 per cent of electricity demand, equivalent to 14TWh. This has allowed the country to avoid US$1.7 billion in additional fossil fuel costs.

Even in Thailand and the Philippines, where growth in solar has been slower, there have been notable savings in expenses for dirty energy. While solar only accounted for 2 per cent of Thailand’s electricity in the first six months of 2022, its generation meant that the nation was able to do without spending US$209 million on fossil fuel. Similarly, the Philippines avoided spending US$78 million in coal, oil and gas, despite solar accounting for only 1.7 per cent of total power generation. 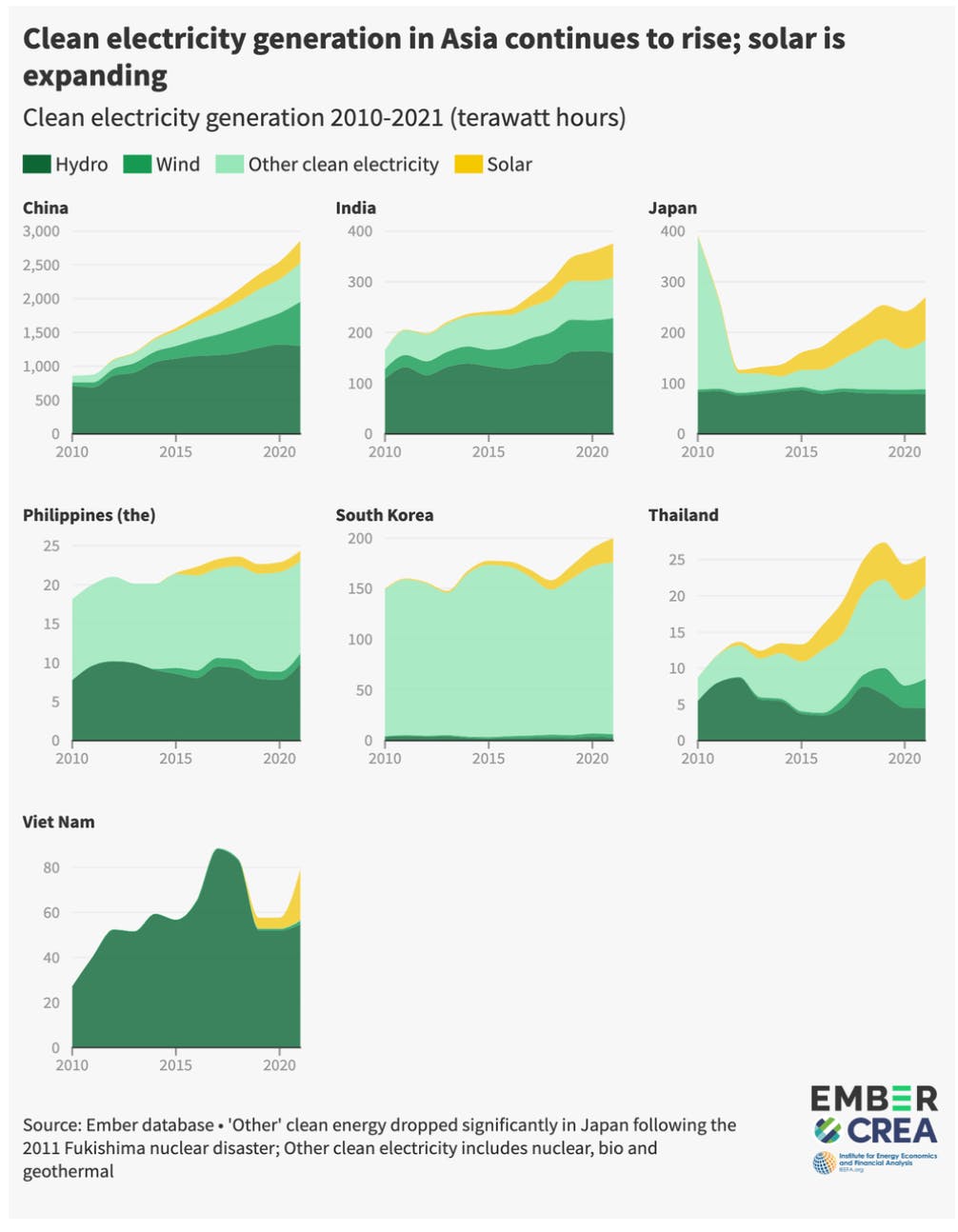 The report highlighted that the Philippines now has more favourable policies towards solar energy, based on its recently revised energy plan.

The Philippines also has net metering provisions in place where corporate customers can use electricity from their renewable energy generator on site, hence reducing the amount of electricity they need to purchase from their retailer. Power purchase agreements can now be done directly between large consumers and solar generators.

Two of the country’s leading renewable energy players Solar Philippines and Ayala’s ACEN now have substantial solar capacity that has been permitted or is under construction.

But challenges to access to financing for solar installations remain.

The country seems to be striking a new tone, and efforts to expand solar capacity could be a gamechanger, said the study. “But its energy policies have often proven fragile.”

The study added that limited rooftop space and challenges to accessing finance are additional barriers.

Thailand led Southeast Asia on solar investments, especially with its recent installation of floating solar power in the north of the country, which could easily connect to existing high voltage transmission lines.

The floating hydro-solar farm in Sirindhorn is capable of reducing the kingdom’s carbon emissions by 47,000 tonnes every year, as part of its ongoing commitment to reach carbon neutrality by the year 2050.

But without a conducive policy environment, progress on installations has been slow in the kingdom.

Thailand once had among the highest installed solar capacity in Asia, but while neighbours like Vietnam and China came up with subsidies and feed-in-tariffs that encouraged solar deployment, the country has lagged in implementing focused policy or financial incentives to build on its strong foundation for solar development in the last decade. Early leaders in the sector, such as B. Grimm and Thai Solar, have shifted their focus away from the domestic market to seek regional opportunities.

The report is optimistic that Thailand’s solar capacity will continue to expand, but adds that there is a need for a “concerted decarbonisation shift”, in order for the renewable energy to replace gas in the country’s energy mix.