The city-state is pumping millions of dollars into hydrogen research, and looking to build a small power plant fuelled by hydrogen derivatives. Its 2030 climate target falls short of what scientists say is needed to keep the world liveable.

Singapore plans to slash its 2030 greenhouse gas emissions by around 8 per cent from its existing target set in 2020.

It could also use cleaner hydrogen fuel to meet as much as half of its power needs in 2050, the year the city-state wants to achieve net-zero emissions.

The country will now strive to peak its emissions before 2030, and limit its output of greenhouse gases in 2030 to an equivalent of around 60 million tonnes of carbon dioxide (MtCO2e). Singapore’s previous target is to peak emissions at 65MtCO2e by 2030.

Wong said the new 2030 target is “significant”, as it is equivalent to reducing the country’s transport emissions by two-thirds. The new pledge will be sent to the United Nations at the global climate summit COP27 next month.

The ability for Singapore to fulfil its pledge will be contingent on the maturity of new decarbonisation technologies and effective international cooperation, Wong said.

The Singapore government has repeatedly said that decarbonising will be a big challenge as it has limited potential to tap on renewables in the city-state, which is often cloudy and rarely windy. The country’s power mix is almost entirely dependent on natural gas, a fossil fuel.

Amid the economic downturn, Wong said the country will not scale back its carbon tax, which is set to reach between S$50-80 (US$35-56) per tonne of carbon emissions by 2030, but continue to provide targeted relief for businesses and households.

Singapore’s updated 2030 target falls short of what scientists say is needed to keep global warming to 1.5 degrees Celsius, a temperature limit generally regarded as a safety threshold for climate risks like droughts and floods.

The United Nation’s Intergovernmental Panel on Climate Change said earlier this year that global emissions should peak by 2025 and drop by over 40 per cent in 2030. Climate activists have said that Singapore should adopt this pledge, given the country’s wealth and technological know-how.

Melissa Low, a research fellow at the National University of Singapore’s Centre for Nature-based Climate Solutions, noted that Singapore is one of only around 20 countries to have improved on its climate pledge since the COP26 climate summit last year. The UK organisers of the 2021 summit had asked countries to level up their climate pledge by this year.

But Low said it is “worrying” that Singapore’s emissions will still be rising till some time before 2030, given that government has declared climate change a global emergency.

Wong said that Singapore’s public sector will aim to reach net-zero emissions by around 2045, ahead of the national target of 2050. This will be done by making government buildings more energy efficient, using cleaner cars and increasing renewable energy capacity. 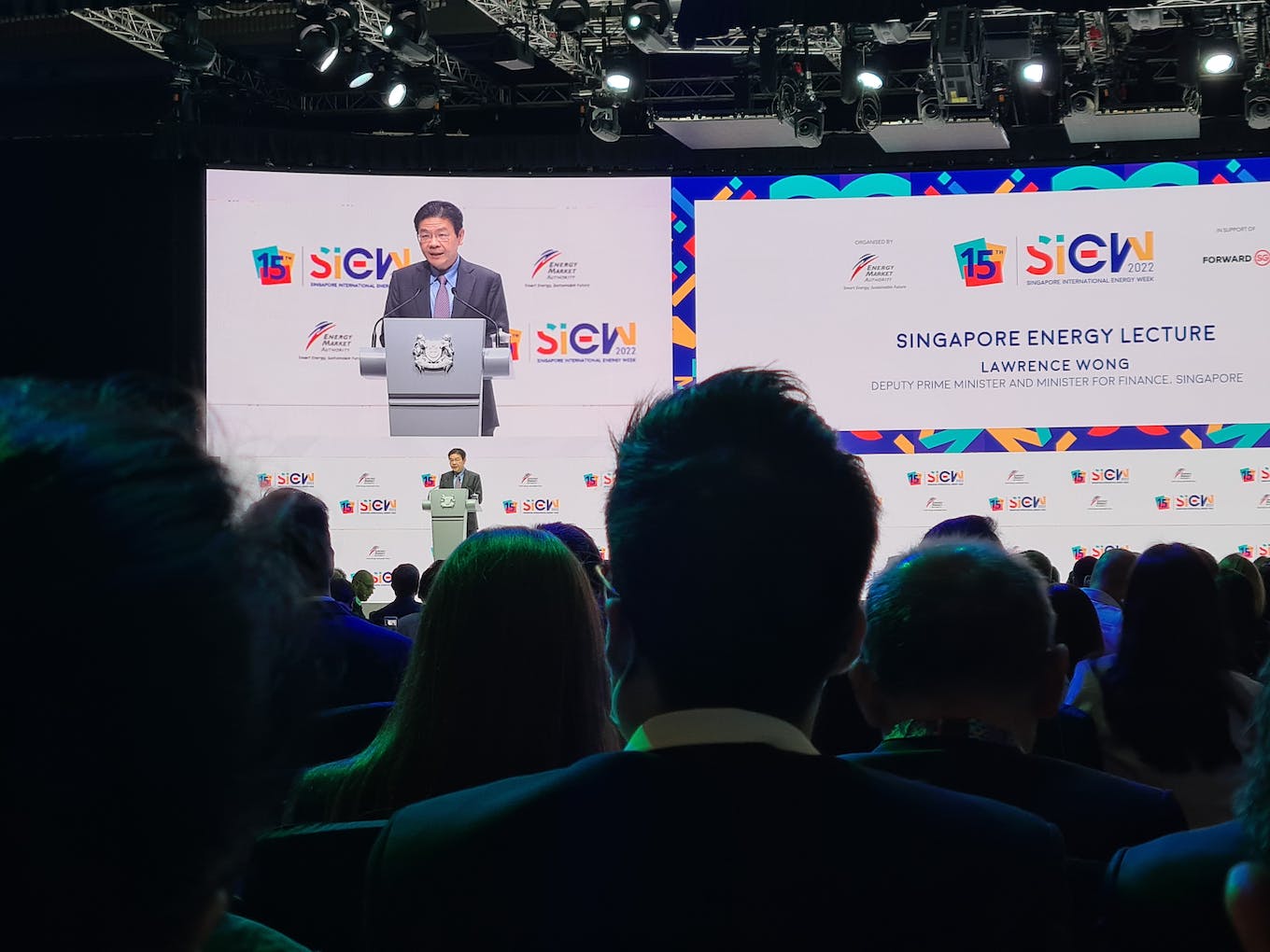 Wong also unveiled a “national hydrogen strategy” to help Singapore leverage the increasingly popular fuel, which he billed as Singapore’s “next frontier” in cutting emissions.

Hydrogen burns when sparked, making it a promising fuel for power plants. While fossil fuels produce earth-warming carbon dioxide as a by-product, hydrogen fizzles into steam.

Most hydrogen fuels today are produced from fossil fuels, though cleaner forms of production, such as those leveraging renewable energy and carbon capture technologies, are currently being scaled up and made cheaper.

Singapore could rely on hydrogen for up to half of its power needs by 2050 if the technology continues to advance, Wong said.

In a scenario-planning paper earlier this year, Singapore’s energy market authority allocated just over half of Singapore’s 2050 energy supply to hydrogen in a situation where the world does not come together to tackle climate change. Other scenarios relied more on energy imports, geothermal energy and natural gas.

Wong said Singapore will seek to build a small-scale commercial facility that uses low-carbon ammonia for power generation, which could come online from 2027. Ammonia is a substance made up of nitrogen and hydrogen atoms, and is seen as a promising way to store and transport hydrogen fuel.

Singapore will likely need new storage and distribution infrastructure for hydrogen and its derivatives as they behave differently from natural gas which the country uses today, Wong said, adding that the country is looking to “lay the groundwork early”.

Researchers have also flagged that ammonia is a toxic gas and could be dangerous if involved in leaks and shipping collisions.

Singapore will allocate “a significant amount” of a new S$129 million (US$91 million) tranche of research funds to hydrogen fuel and its applications, Wong said. An earlier S$55 million tranche had been split between studying hydrogen fuel and carbon capture technologies.

The country will build ties with other countries and international groups to build hydrogen supply chains and work with trade unions to train up its workforce, Wong said.

The global market size of hydrogen fuel is expected to grow 65 per cent to over US$225 billion by 2030. Within the Asia Pacific, Australia and Japan are generally seen as front-runners, while India has also said it wants to export renewable hydrogen.

Are Kaspersen, an associate partner in energy and natural resources at American consultancy firm Bain & Company, said Singapore’s commitment to hydrogen is “crucial” in developing its low-carbon energy system.

“One of the biggest challenges with hydrogen today is breaking the supply-demand deadlock – certainty of demand is needed to develop supply, but transitioning to hydrogen in demand sectors requires supply commitment,” Kaspersen said.

He added that commercial opportunities in hydrogen technology remain limited in the short-term, requiring market players to take a “flexible approach” in investing and managing risk.

Local players have already started moving into the hydrogen space.

Singapore infrastructure company Keppel said in August that it was planning to build a natural gas power plant locally that could run on hydrogen, but did not state when it would make the switch to the cleaner fuel.

This story was updated to include a response to Singapore’s updated 2030 targets and new industry announcements regarding hydrogen fuel.