Solar could meet 43% of Singapore's power demand during mid-day by 2050: study

Solar modules could be integrated into Singapore urban landscape just like trees, and comprise almost half of the country's electricity demand by mid-century, a study has found.

Although Singapore has plenty of solar potential, many believe the tiny island-nation is too space-scarce to soak up much of the sun’s energy.

But if the city-state accelerates the adoption of photovoltaic modules in creative ways using all surfaces available, solar energy generated at home could meet a staggering 43 per cent of the nation’s electric power demand during mid-day by 2050, up from about 5 per cent currently, a new study has found.

With adequate policies, Singapore’s solar capacity could grow to 5 gigawatt-peak (GWp) by mid-century, up from 350 megawatt-peak (MWp) today, leading to 2.4 million tons of carbon dioxide emissions annually, reads the analysis, by the Solar Energy Research Institute of Singapore (SERIS) at the National University of Singapore (NUS).

But country has vast unexplored potential to use novel, cost-effective urban solar applications that can be integrated into existing infrastructure, even if few off-the-shelf solutions are currently available, warranting more research and development efforts, reads the new study, which analysed the solar potential of about 132,000 buildings across the island-state. 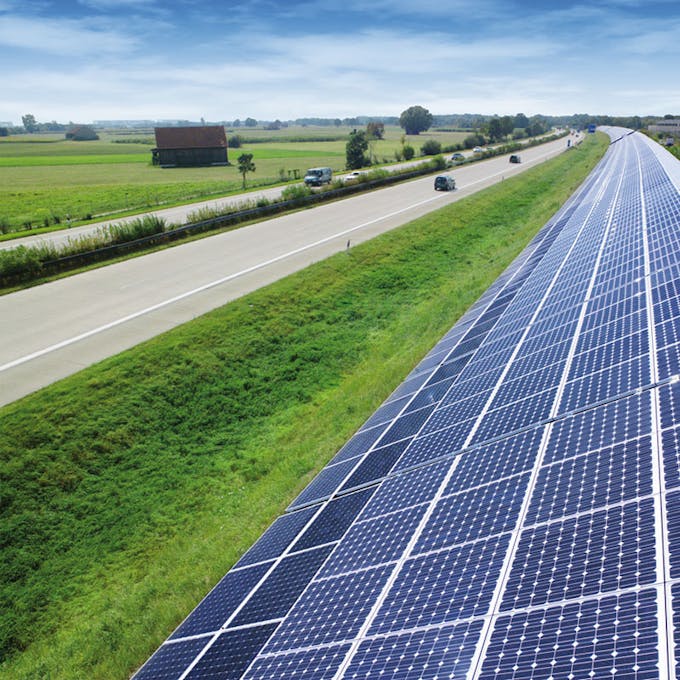 A solar noise barrier in Germany. Image: Isofoton, CC BY 3.0

Parking lots, drainage canals and roads, for instance, could be overbuilt with solar installations, while photovoltaic noise barriers, which have already been deployed in several European cities, could be installed across Singapore’s rail and expressway networks, says the report.

In recent years, Singapore has taken progressive steps towards its low-carbon future, and its efforts have borne fruit. Only last month, the city-state met its 2020 solar target of deploying 350 MWp of photovoltaic capacity, bringing it a step closer to realising its 2030 ambition of producing at least 2 GWp of solar energy—enough to power about 350,000 households annually, or around 4 per cent of its current electricity needs.

The city-state also announced plans last year to deploy 200 megawatts (MW) of power storage systems beyond 2025 and is studying emerging technologies such as hydrogen generated from renewables, even as it explores options to plug into regional power grids to overcome its land constraints and access cleaner energy.

The most daring clean energy strategy for Singapore to date was a local developer’s ambition revealed last year to export solar energy from Australia’s Northern Territory to the island-state via the world’s longest subsea high voltage cable.

However, more efforts are required to maintain solar industry momentum in Singapore in the long term.

Beyond using more solar systems, the country will need to maximise the energy generated from the modules it installs, using high-yielding technologies that can convert more sunlight into electricity, shows the study. But more of the policies that could foster the development of such technologies, encouraging test-bedding and allocating suitable areas for deployment, need to be put in place.

Policy changes are also needed to address bankability issues still facing solar developers, with the price of photovoltaic electricity exported to the grid determined by bids from gas-fired power stations. This exposes developers to price fluctuations in the conventional electricity market, reducing the appetite for project financing among lenders.

And as Singapore’s solar capacity grows, the nation must take steps to address challenges posed by the intermittency of sunshine due to urban shading and varying cloud cover.

While fluctuating solar output will unlikely become a critical issue before 2030, investments in grid resilience and other measures may be required by 2050 to handle the stress intermittent electricity generation places on power infrastructure over the long term, reads the new analysis.

To ensure its energy system remains up to par, Singapore could use waste-to-energy facilities or other flexible conventional power generation technologies as a backup, provide more storage for green power, or modify consumer demand, encouraging citizens to use less electricity during peak hours or shift the time of power use to off-peak times.

Singapore knows that its current dependence on natural gas as the main source of energy brings with it certain threats.

Increasing the share of photovoltaic power generation could bring multiple benefits for Singapore. Besides helping the country achieve its target of halving its peak carbon emissions by 2050 pledged under the Paris Agreement, solar energy could help the state remain competitive and attractive for multinational companies, which increasingly demand clean energy supply for their operations, says the study.

SERIS’s deputy chief executive Dr Thomas Reindl said: “Those corporates create a large demand for green electricity and hence are also willing to pay a premium over the retail electricity price to achieve their sustainability goals. This premium then adds to the financial attractiveness of investment in solar power installations in Singapore.”

He said solar energy was not only the most viable renewable energy source for the country, its costs would also continue to drop, with the longest generation cost forecast to reach a low of SG$0.038 per kilowatt-hour (kWh), down from SG$0.065/kWh currently.

For larger rooftop photovoltaic systems of more than 1MWp, the cost of generated electricity is at present already lower than the average commercial power rates, and often even lower than the wholesale market price.

Adding to such benefits is that more domestic photovoltaic installations would ensure greater energy security in the country, which presently sources 95 per cent of its power from imported natural gas.

Sovetbek said: “Singapore knows that its current dependence on natural gas as the main source of energy brings with it certain threats, such as supply disruptions and price fluctuations.”

“The risk varies with time and depending on the political situation, but it still remains there and therefore, diversifying the energy sources for Singapore could be a way to enhance the country’s energy resilience,” he told Eco-Business.

“For every kilowatt-hour of solar energy produced locally, Singapore does not need to import gas for conventional power generation. This also has an economic impact, as the money spent overseas to buy gas remains in the country and can be spent here,” said Reindl.