Singapore plans to build fish farms next to corals; a report says it is possible

An environmental impact assessment (EIA) report on the planned fish farms suggests safeguards such as capacity limits and sealed enclosures. But experts say that stronger measures are needed.

Building fish farms metres away from coral reefs may not sound like the best idea, but Singapore authorities think it necessary for the island nation’s food security.

Three new fish farms spanning nearly 655,000 square metres are now on the cards, as the city-state looks for ways to produce 30 per cent of its own food by 2030, up from about 10 per cent today.

Existing fish farms in Singapore, many under 10,000 square metres and along its northern shores, produced 4,700 tonnes of fish in 2019. The new farms, planned near its biodiversity-rich southern islands, could quadruple that capacity.

A report examining the potential environmental impacts of the proposed farms said the sites chosen were suitable for aquaculture.

It recommended a closed containment design that separates farm water from seawater, as opposed to open-cage fish pens. The study also determined capacity limits and suggested keeping 10 to 20 per cent under them, at least in the initial years.

The year-long study was arranged by Singapore’s food agency in 2020 and 2021. A report prepared by environmental consultant DHI Water and Environment was released last month for public feedback.

How to view the EIA report

Email Lim Swee Keng and Jawara Alba from to arrange for a session at the Singapore Food Agency office in JEM office tower, Jurong East. The report is available for public viewing till 15 June 2022.

The 320-page report could only be viewed in-person in two-hour periods, despite the government saying such reports may be made available online if there is “significant public interest” in 2016. No pictures were allowed to be taken.

The Singapore Food Agency said it extended the viewing period by two weeks to allow more people to provide feedback, but did not say why the report was not posted online.

Eco-business reviewed the report. These are the key findings.

Where the farms are sited

They are planned to be built among a group of islands which Singapore uses for military training, petrochemical works and storing incinerated waste. Corals line many of the islands, while seagrass meadows are present in some intertidal areas. 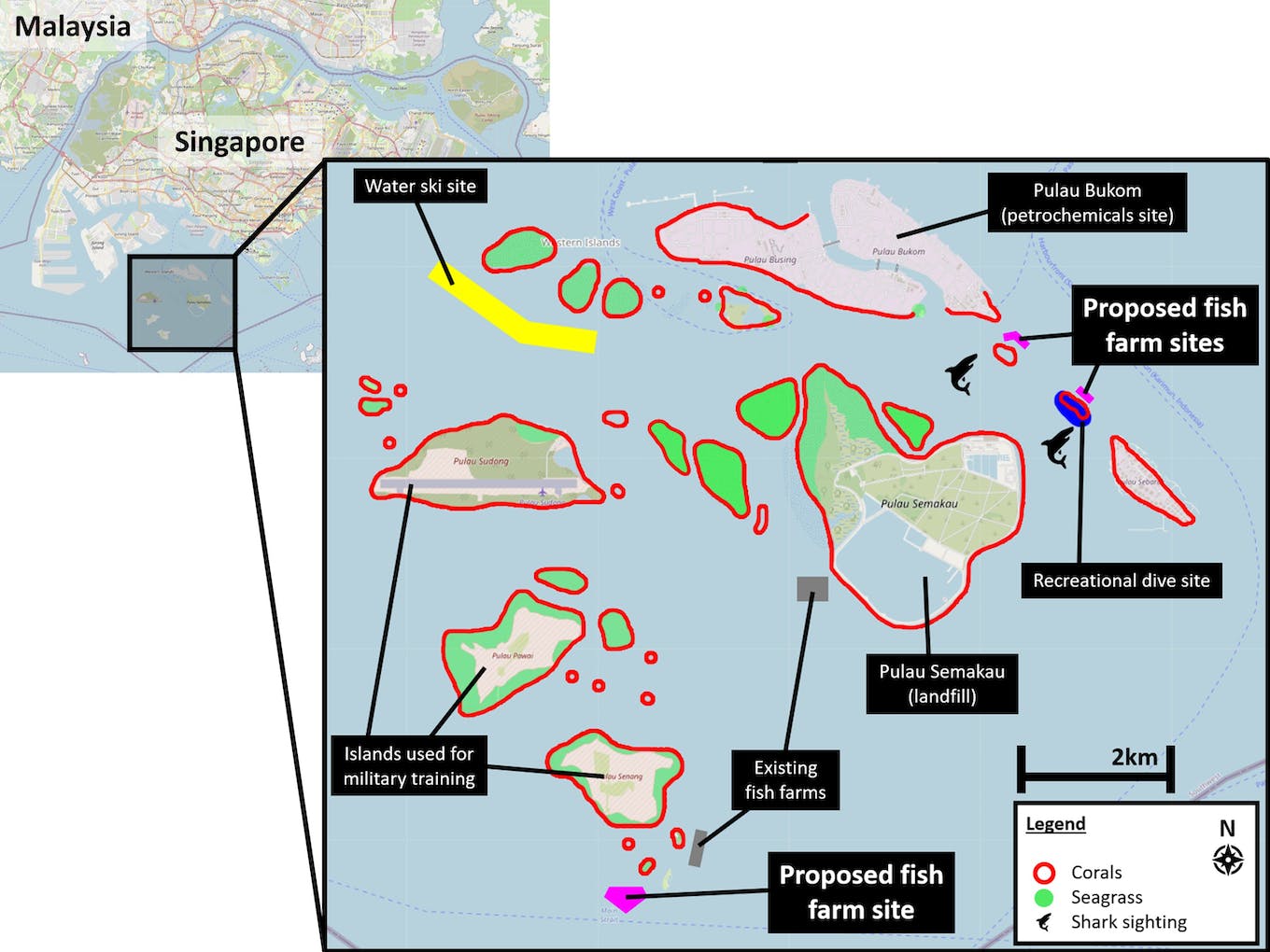 Approximate locations of the proposed fish farms in the waters off southern Singapore. This map is recreated based on a sketch of images shown in the environmental assessment report. Image: Eco-Business, base map via OpenStreetMap. [click to expand]

Impact to seabed and intertidal creatures

The seabed ecosystem could be disrupted if spills of hazardous materials occur. The farms itself will take up seafloor real estate for mooring and introduce waste.

The risks will be “slight” or “minor”, and can be further managed by having emergency response plans and equipment, using good fish feed and taking precautions during refuelling activities.

The study ranked negative impacts on five levels. All identified risks in the report fell within the safest three levels, “slight”, “minor” and “moderate”.

Coral reefs are known to be sensitive to water quality changes. Most of the corals in Singapore’s waters are around the southern islands, where the fish farms are being planned.

Researchers also found endangered intertidal species such as giant clams and seagrasses near the farm sites, though the report said species diversity there is low.

There would be no impact to the seabed and organisms living there when fish farms are being built, as the footprint of anchoring activities is considered small in the report.

Dolphins and sharks have been spotted off southern Singapore in the past, while whales also travel through tropical waters in the region. The noise from installing fish farms could irritate them, though the report said they could just swim away. The impact was deemed “slight”.

To minimise disturbance for dolphins and whales that use sound to navigate and communicate, the report said seafloor drilling should be avoided as much as possible.

Fish farms that use open-cage pens, which is common in Singapore today, could cause uneaten fish feed, excrement and medicine residue to leech into surrounding seawater.

There will be “slight” to “minor” impacts to seawater quality if open cages are used, though the risks can be monitored and managed, the report said.

Environmental impacts could be further reduced if the fish farms adopted a closed containment design instead, where fish pens are sealed and farm water is treated before release, the report said.

Sealed pens also reduce the risk of attracting predators such as sharks, it added. One of the fish farm sites is close to a recreational diving site, making it risky if sharks were to come close.

Such technology has been used in a S$4 million (about US$2.9 million) fish farm off eastern Singapore which opened in 2019. It was funded in part by Singapore’s food agency.

If an open-cage design is chosen for the farms, there should be a 40-metre boundary around the farm to prevent sedimentation from harming surrounding wildlife.

There should be close monitoring within the boundary to prevent organic matter build-up, the report recommended.

One proposed fish farm site, off Pulau Jong, could be just about 40 metres from coral reefs, based on maps in the study. However, the report said the site does not overlap extensively with marine habitats.

The limit for open farms was determined to be 22,260 tonnes of fish a year, while that of closed contained farms was 18,200 tonnes. Water quality could deteriorate should the farms rear more fish.

The report recommended staying 10 to 20 per cent under those limits as a precaution, at least in the initial years.

The biggest risk identified in the report was if a fish farm broke away from its mooring. A loose cage could float into busy shipping lanes in the region – causing “moderate” risk to vessels.

The report called for a “full mooring assessment” before installing the fish farms, which could reduce residual risks to nil.

Other measures recommended in the report include keeping oil spill kits on the fish farms, proper procedures for reporting and recording accidents and unexplained fish deaths. Non-native and genetically modified organisms should be avoided, or used in line with regulations. Antibiotics should not be used to prevent fish illnesses in normal circumstances to reduce the risk of drug resistance.

Local environmental experts have called for more stringent monitoring and studies on the impacts of climate change in the local press. Mass fish deaths have occurred in fish farms along Singapore’s northern shores in past years due to high temperatures and plankton poisoning.

“You must meet the original target of 30 by 30, which is to replace imports, before you expand production,” she told Eco-Business, referring to the official name of Singapore’s food production targets this decade. 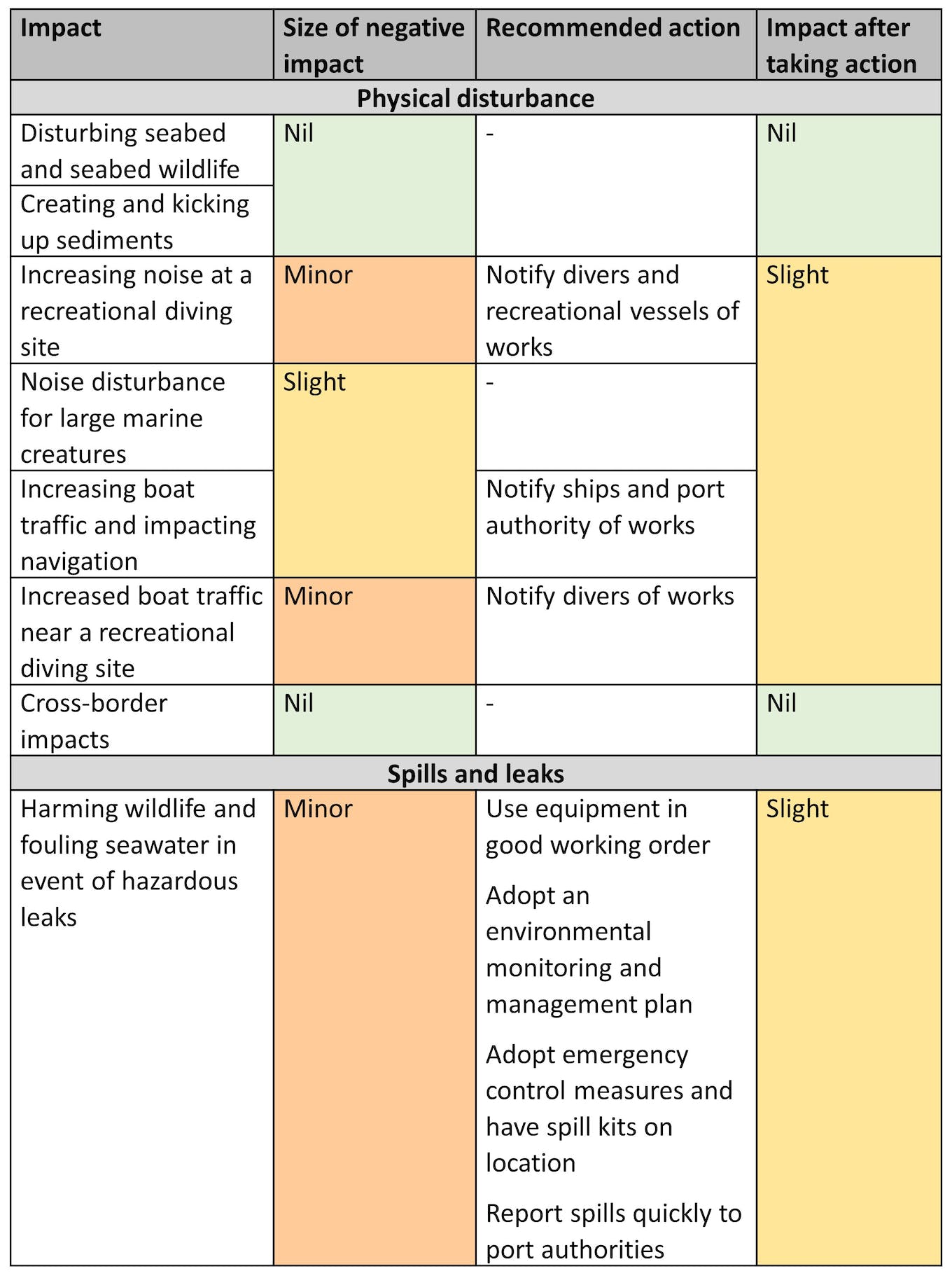 When fish farms are up and running: