Should the Philippines copy Indonesia and relocate its sinking capital?

Manila is sinking at a rate that could make the city unliveable in two decades, scientists from the Philippines' state university have found. Could a solution be to transfer the nation’s capital elsewhere, as Indonesia is planning?

Large parts of Metro Manila, the Philippines’ dense, sprawling centre of government and business, could be underwater 20 years from now due to extensive groundwater extraction, scientists from the University of the Philippines have revealed.

In an ongoing study called Widespread land subsidence in Metro Manila, Philippines and surrounding areas detected by InSAR time-series analysis, the capital was found to be sinking by as much as 6 centimetres per year between 2003 to 2018.

The phenomenon is known as land subsidence, where groundwater is extracted faster than it is replenished by nature, and the land becomes submerged, the report’s lead author Narod Eco explained.

Underground water is pumped out through unregulated wells to meet the demands of a booming population and growing economy, he said.

Using satellite technology, the report found that the circular-shaped pattern of sinking grounds in Metro Manila are in coastal cities like Caloocan, Malabon, Navotas, Valenzuela, where floods from land subsidence is exacerbated by sea level rise.

In Metro Manila, more than 40 per cent of its population of 13 million live in coastal communities, placing them on the frontlines of disaster.

Cities with land subsidence worsened by pre-exisitng earthquake fault lines like Quezon City, Marikina, Pasig, Makati, Taguig and the provinces of Cavite and Laguna are also most prone to sinking. 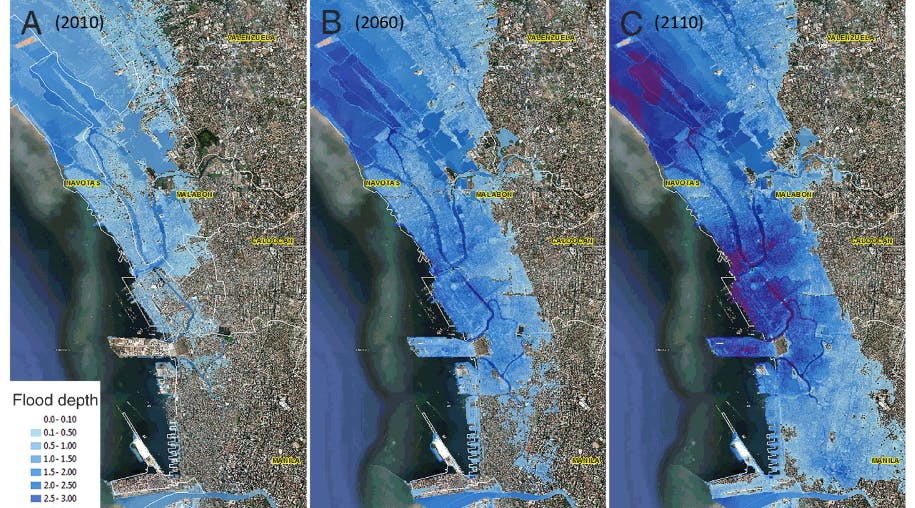 Satellite images show flood inundation in 2010 went as deep at 30 cm. Given a high tide at 1.5 metres, flooding in 2060 is projected to go as deep as 1 metre, and in 2110, it might be as high as 3 metres. Image: Jericho Mendoza, UP Resilience Institute

Processed radar images found that in 2010, some of the most vulnerable parts of the capital have been permanently flooded by as much as 30cm.

This is a slow-onset disaster that that can stretch out for weeks, months, or even years. It’s like the fable of the boiling frog, where you don’t realise you’re being slowly cooked alive.

Eco, who has been tracking the phenomenon with a group of researchers from the university’s Marine Science Institute, said the sinking of Metro Manila is not a typical disaster like an earthquake, flooding or volcanic eruption where the effects are instantly felt.

“This is a slow-onset disaster that that can stretch out for weeks, months, or even years. It’s like the fable of the boiling frog, where you don’t realise you’re being slowly cooked alive,” he said.

Manila, the next Jakarta?

As Metro Manila witnesses unchecked urbanisation that has compounded the effects of climate change, scientists proposed the relocation of the national capital to decongest the city and lessen the pressure on groundwater supply.

Dr Mahar Lagmay, one of the authors of the University of the Philippines study, said the city centre should be transferred to Mindanao, the archipelago’s second largest island, in southern Philippines.

“If we’re talking about resilience, I would propose for the capital of the Philippines to be transferred to Mindanao. Metro Manila’s overpopluation makes the environment hard to manage, making it prone to disasters,” Lagmay told Eco-Business. “By moving the capital, it could decongest Metro Manila, which seems like a dying city.”

Lagmay said Mindanao’s geographical location is ideal to faciliate trade with the Philippines’ Southeast Asian neighbours. Compared to other parts of the island-nation, Mindanao is nearest to Indonesia, one of the country’s largest trading partners, with bilateral trade valued at US$7.81 billion in 2018.

Lagmay, who also heads the university’s Resilience Institute, said the Philippine government has been studying models like that of Indonesia, which in August announced a plan to move its capital from Jakarta, on the island of Java, to the province of East Kalimantan, on Borneo.

Jakarta’s planned relocation is to cope with subsidence, rising sea levels and congestion in the city of 10 million.

Like Jakarta, the Philippines might want to retain Metro Manila’s status as the country’s commercial and financial hub, while government agencies shift to Mindanao, Lagmay added.

In 2018, Philippine government legislators proposed the move of the country’s seat of government to Davao City in Mindanao, hometown of current president Rodrigo Duterte.

It was to “address the issue of Manila Imperialism,” decongest the capital and spur development in the south of the country, the legislators said.