For the first time ever since the Industrial Revolution, the world has seen half of its population rise as the global middle class, indicating improved living standards and prosperity that is more shared across the globe.

Swedish academic Hans Rosling has identified a worrying trend: not only do many people across advanced economies have no idea that the world is becoming a much better place, but they actually even think the opposite. This is no wonder, when the news focuses on reporting catastrophes, terrorist attacks, wars and famines.

Who wants to hear about the fact that every day some 200,000 people around the world are lifted above the US$2-a-day poverty line? Or that more than 300,000 people a day get access to electricity and clean water for the first time every day? These stories of people in low-income countries simply don’t make for exciting news coverage. But, as Rosling pointed out in his book Factfulness, it’s important to put all the bad news in perspective.

While it is true that globalisation has put some downward pressure on middle-class wages in advanced economies in recent decades, it has also helped lift hundreds of millions of people above the global poverty line—a development that has mostly occurred in South-East Asia.

The recent rise of populism that has swept across Western countries, with Trump, Brexit, and the election of populists in Hungary and Italy, among various other factors, is thus of great concern if we care about global welfare. Globalisation is the only way forward to ensure that economic prosperity is shared among all countries and not only a select few advanced economies.

While some people glorify the past, one of the big facts of economic history is that until quite recently a significant part of the world population has lived under quite miserable conditions—and this has been true throughout most of human history. The following seven charts show how the world has become a much better place compared to just a few decades ago. 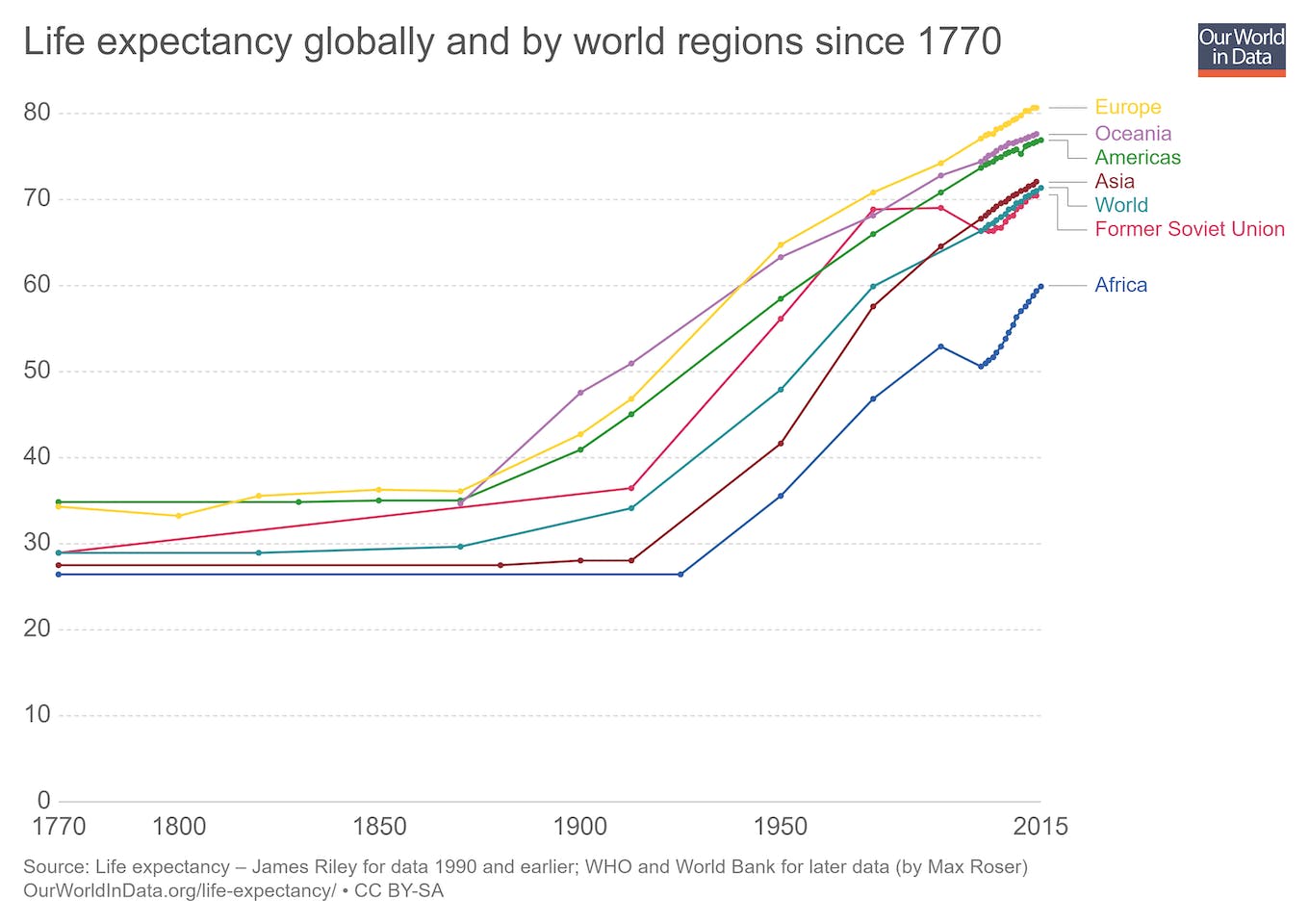 Even during the Industrial Revolution, average life expectancy across European countries did not exceed around 35 years. This does not imply that most people died in their late 30s or even 40s, since it was mostly very high levels of child mortality rates that pulled down the average. Women dying in childbirth was obviously a big problem, too. So were some common diseases such as smallpox and the plague, for example, which now have been completely eradicated in high-income countries. 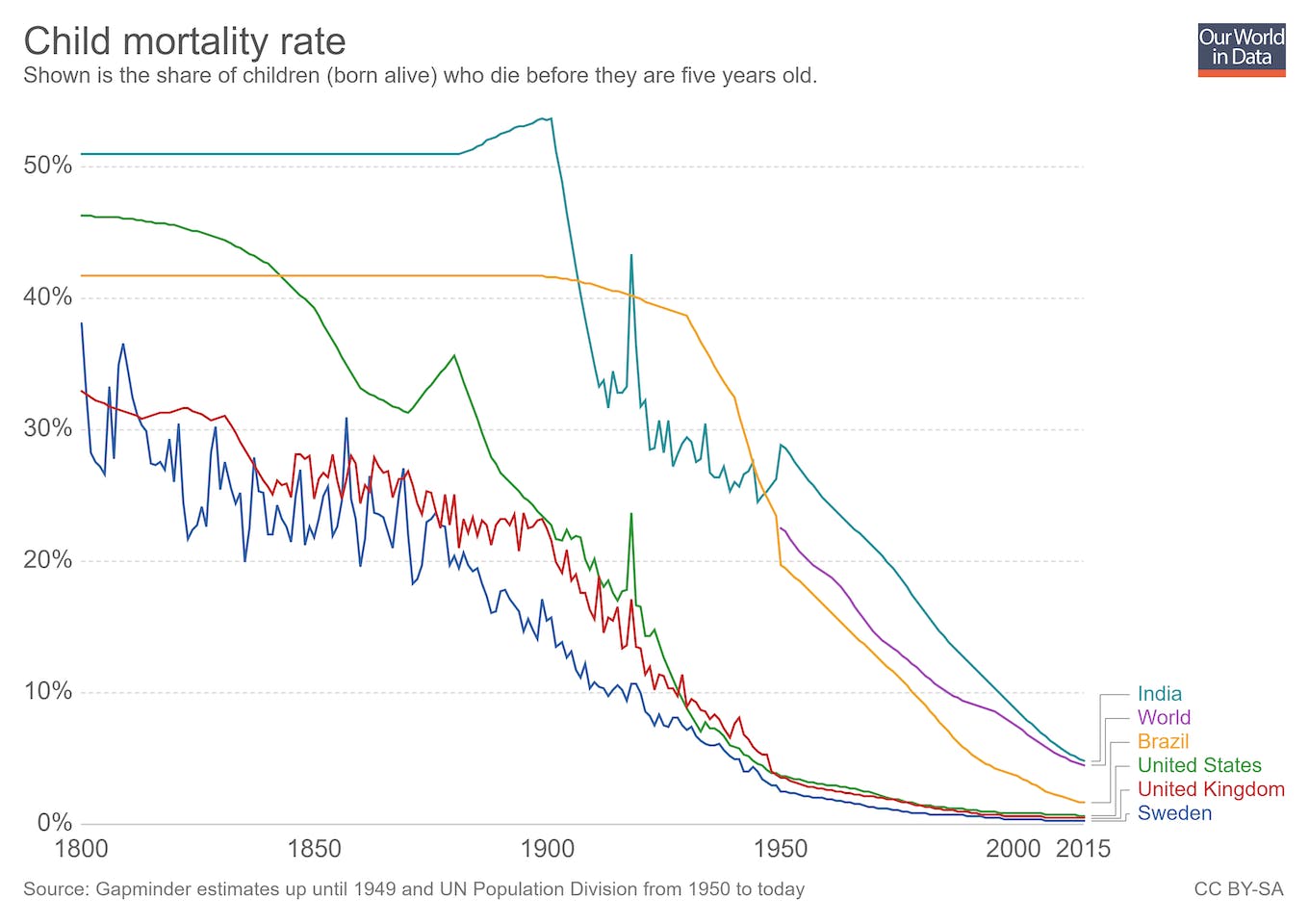 More than a century ago, child mortality rates were still exceeding 10 per cent—even in high-income countries such as the US and the UK. But thanks to modern medicine, and better public safety in general, this number has been reduced to almost zero in rich countries.

Plus, developing economies like India and Brazil now have much lower child mortality rates today than advanced economies had at similar income levels about one century ago. 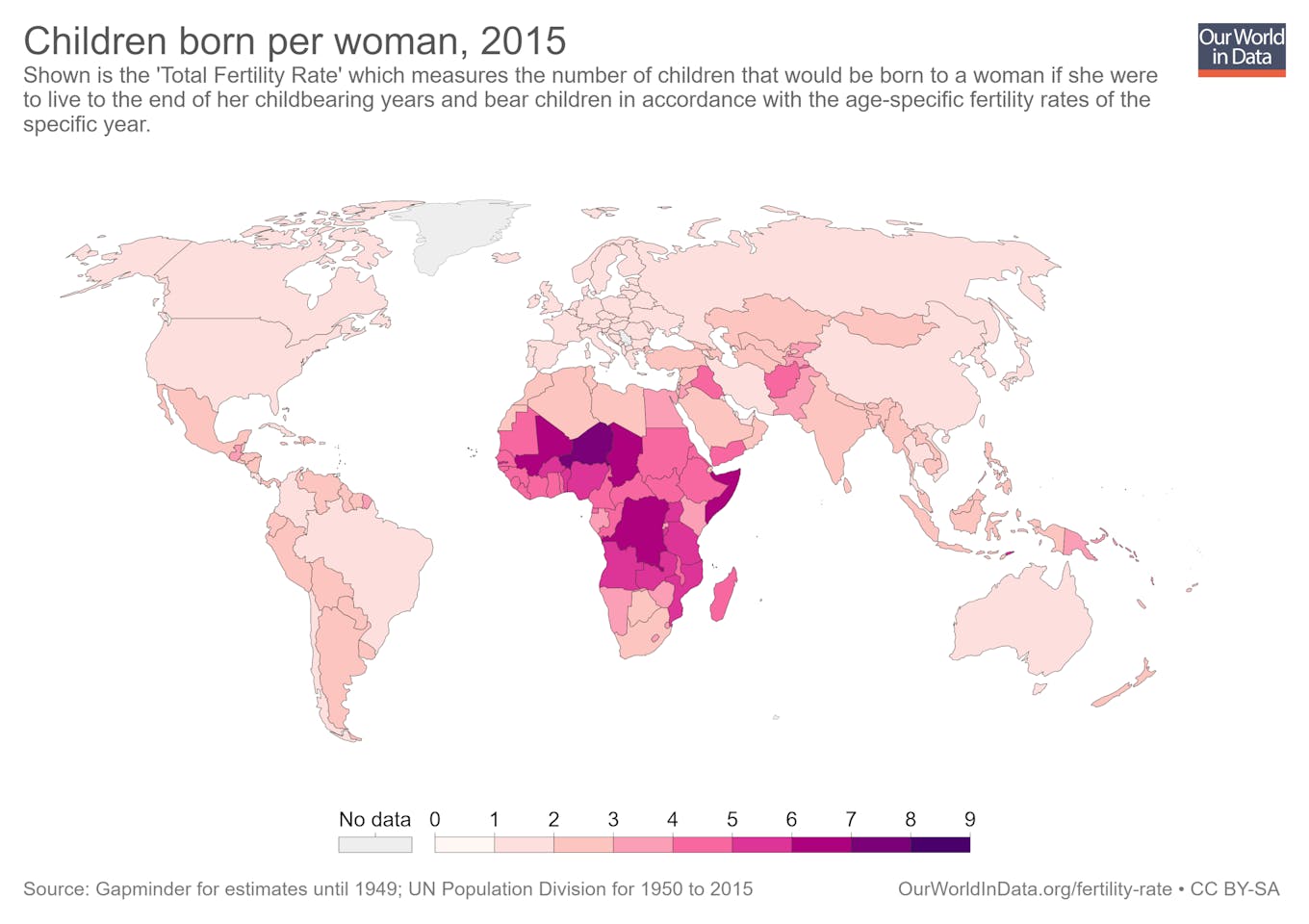 Moreover, as can be seen from the chart, many developing countries such as Brazil, China and a number of African nations have already switched to a low-fertility regime. While this transition took many advanced economies almost 100 years, starting with the Industrial Revolution, many others have since achieved this over just two to three decades. 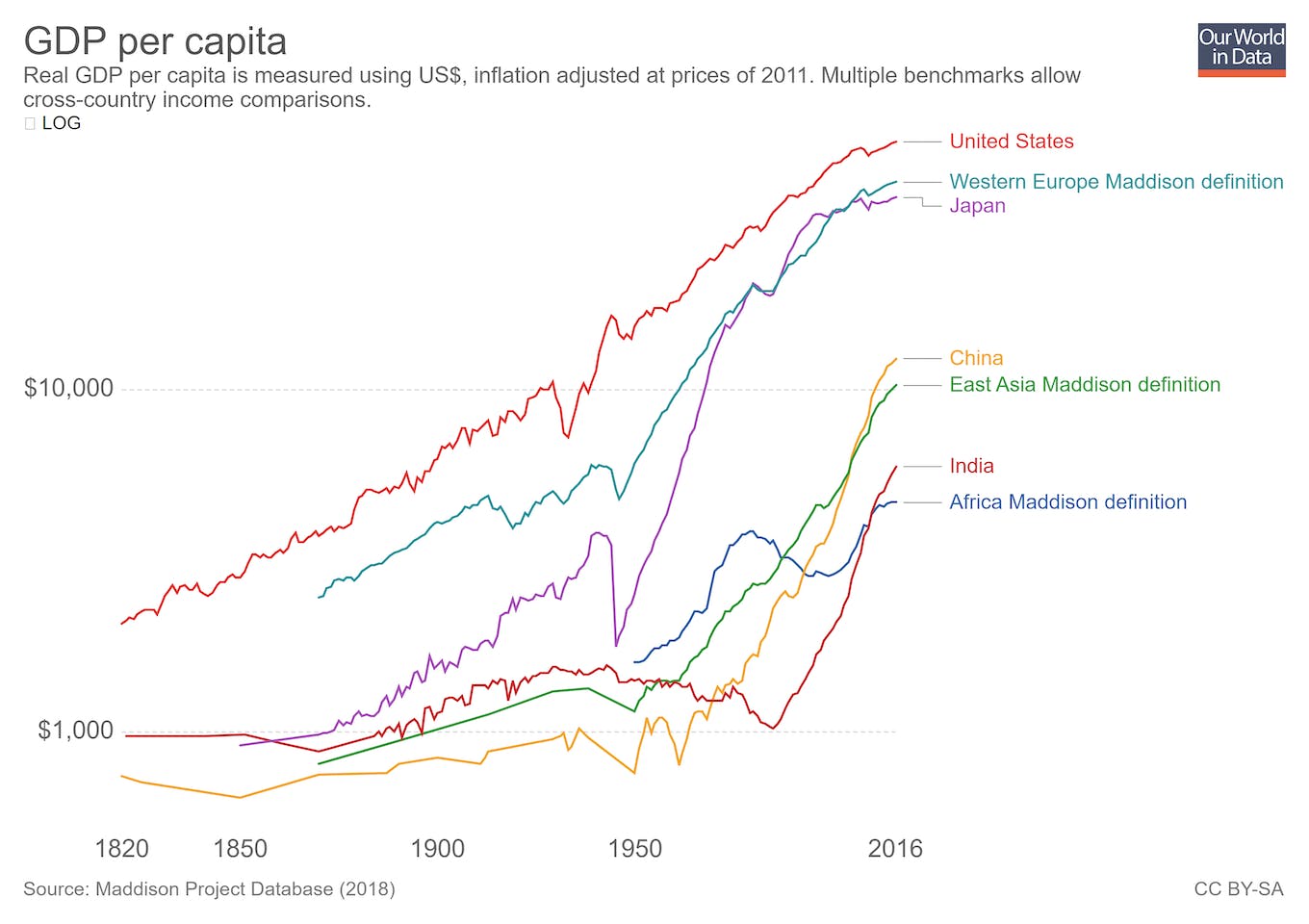 Technological leaders, the US and Western Europe, have been growing at about 2 per cent per year, on average, for the past 150 years. This means that real income levels roughly double every 36 years.

While there were many long-lasting ups and downs, like the Great Depression or the recent Great Recession, the constancy of the long-run growth rate is actually quite miraculous. Low-income countries, including China and India, have been growing at a significantly faster pace in recent decades and are quickly catching up to the West. A 10 per cent growth rate over a prolonged period means that income levels double roughly every seven years. It is obviously good news if prosperity is more shared across the globe.

5. Global income inequality has gone down 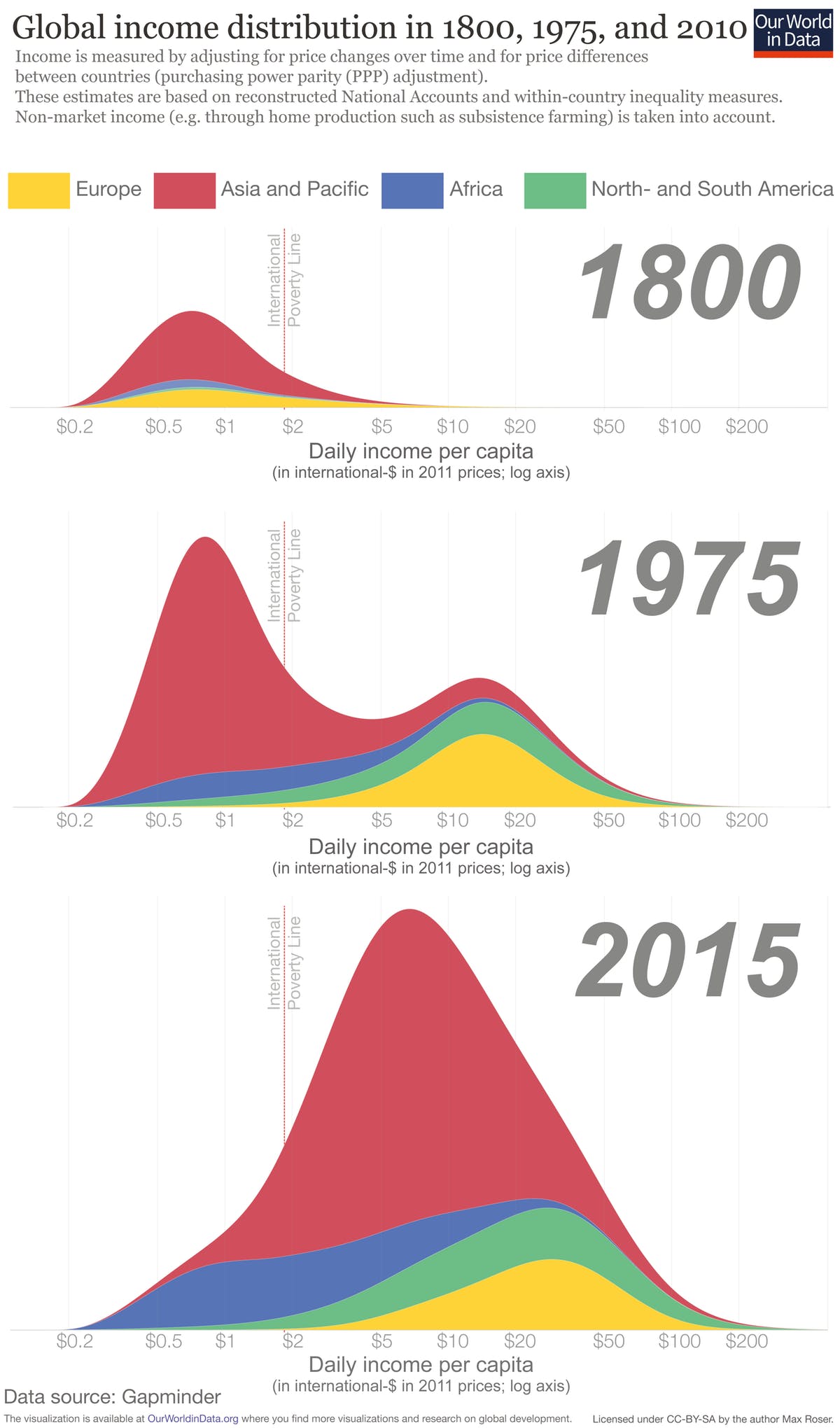 While inequality within countries has gone up as a result of globalisation, global inequality has been on a steady downward trend for several decades. This is mostly a result of developing countries such as China and India where hundreds of millions of people have seen their living standards improve. In fact, for the first time ever since the Industrial Revolution, about half of the global population can be considered global middle class.

6. More people are living in democracies 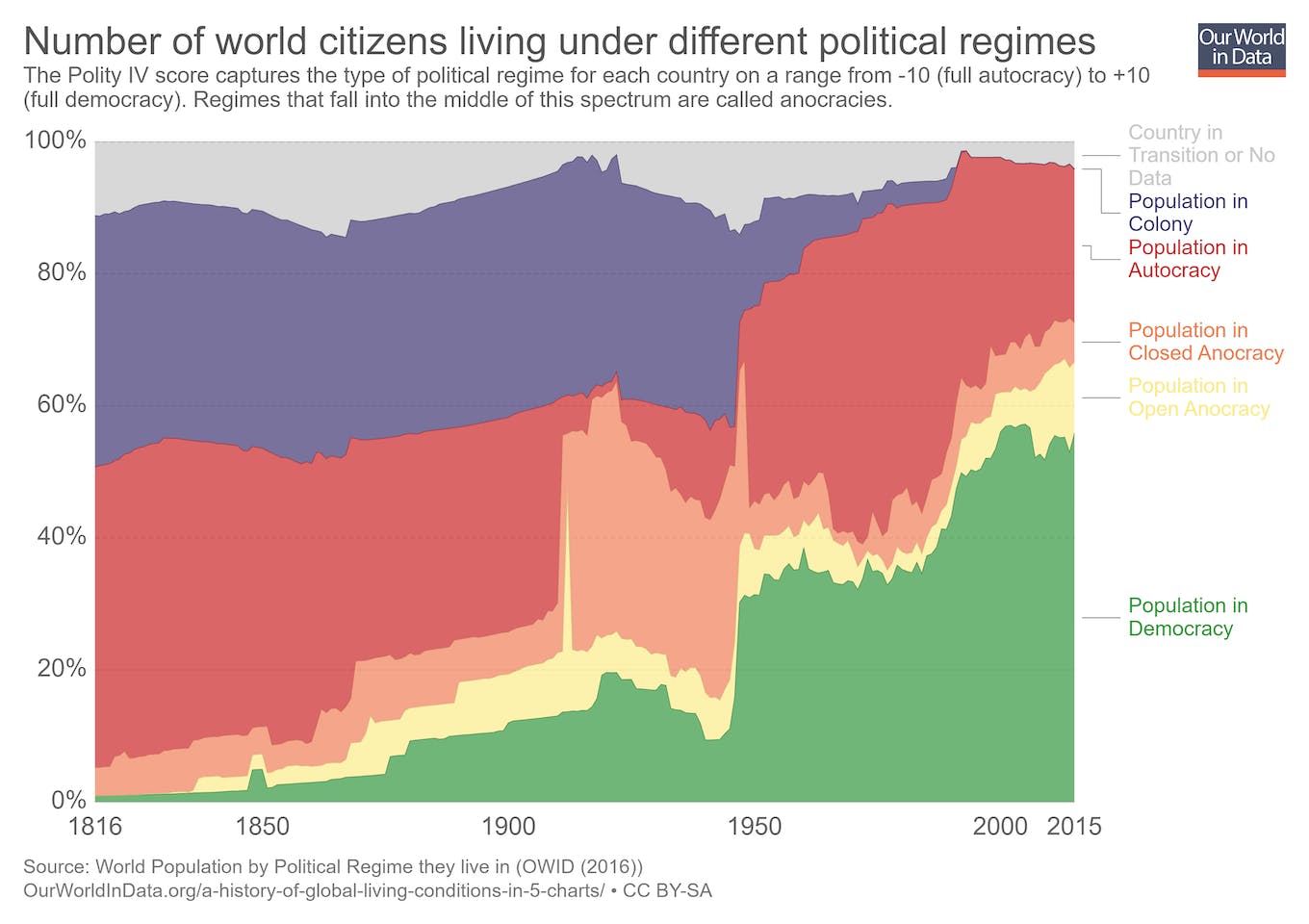 Throughout most of human history people lived under oppressive non-democratic regimes. As of today, about half of the human population is living in a democracy. Out of those still living in autocracies, 90 per cent are in China. While the country has recently moved in the other direction, there is reason to believe that continued economic development might eventually lead to democratisation (according to modernisation theory).

7. Conflicts are on the decline 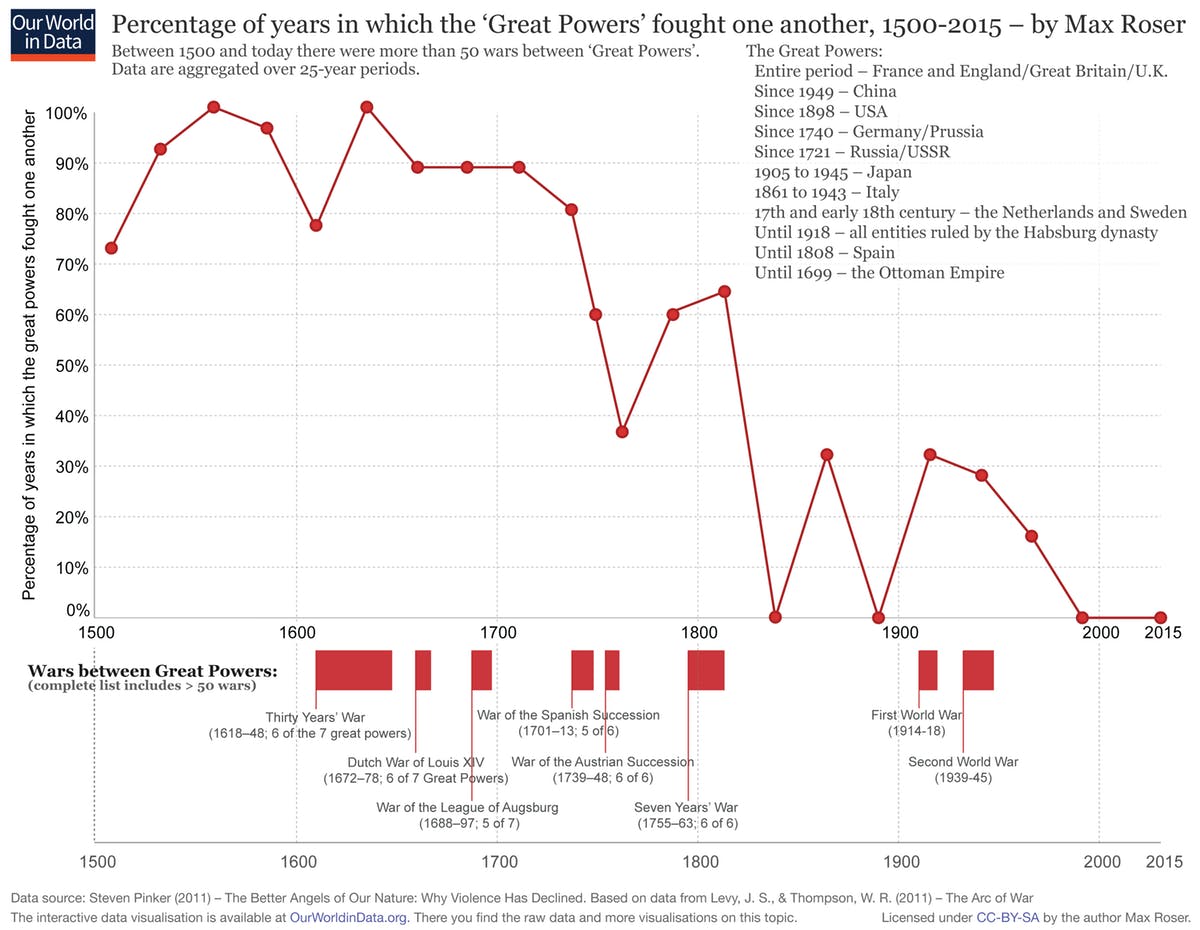 Throughout history, the world has been riven by conflict. In fact, at least two of the world’s largest powers have been at war with each other more than 50 per cent of the time since about 1500.

While the early 20th century was especially brutal with two world wars in rapid succession, the postwar period has been very peaceful. For the first time ever, there has been no war or conflict in Western Europe in about three generations, And international organisations including the EU and the UN have led to a more stable world.

This story was published with permission from The Conversation.