Coca-Cola sees Southeast Asia’s leaky waste collection systems as the biggest challenge to meeting its recycling targets in this region, which is among the biggest sources of marine plastic pollution globally.

The soft drinks giant, which on Friday at the SEA of Solutions conference at the United Nations in Bangkok announced a switch from green to clear plastic bottles for its Sprite brand in the region—transparent polyethylene terephthalate (PET) is easier to recycle—committed at the beginning of last year to make all of its packaging 100 per cent recyclable by 2025 and use at least 50 per cent recycled material in its packaging by 2030.

Speaking to Eco-Business on the sidelines of the SEA of Solutions event, Belinda Ford, Coke’s public affairs, communications and sustainability director for Southeast Asia, said that collective action, including supportive policies from the region’s governments to improve waste collection and separation at source, was key to helping the company—which routinely tops rankings of the world’s biggest plastic polluters—to meet its sustainbility ambitions. 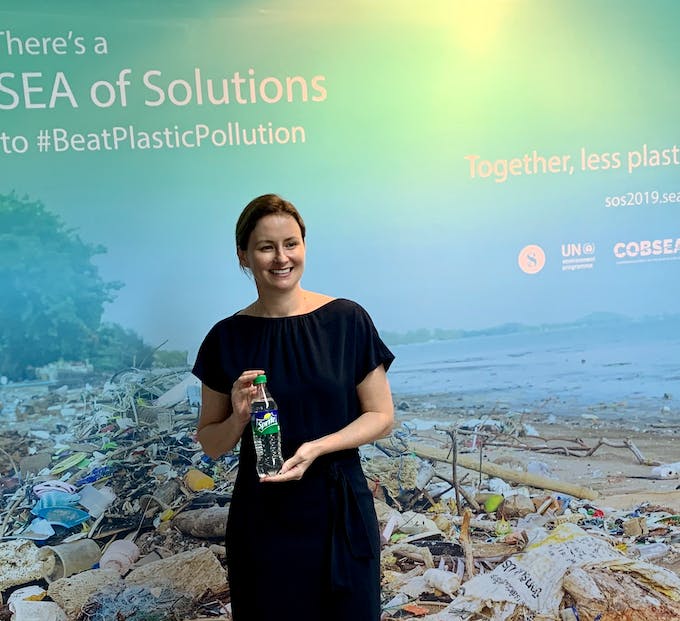 Belinda Ford of Coca-Cola poses at the SEA of Solutions event with the new transparent Sprite bottle, which is easier to recycle and made from recycled plastic. Image: Eco-Business

Her comments are backed up by a new report for Coke by sustainability consultancy GA Circular, Full Circle: Accelerating the Circular Economy for PET plastic bottles in Southeast Asia, which finds that the collected-for-recycling rate for PET bottles in Indonesia, Philippines, Vietnam, Thailand, Myanmar and Malaysia is on average 54 per cent at the city level, and just 26 per cent nationally.

Ford’s comments are also echoed by research from trade body Food Industry Asia, released in October 2018, which identified improving Southeast Asia’s waste collection systems, rather than plastic bans or taxes, to be the most effective way to stop plastic leaking into the ocean.

However, environmentalists, including the Break Free from Plastic alliance, have said that corporates need to stop placing the blame for tackling the plastic crisis on poorly resourced governments and using recycling as a way to continue to use high volumes of plastic in their products, and produce more reusable packaging or no packaging at all where possible.

Ford told Eco-Business that she was “optimistic” that Coke could hit its recycling and recyclability targets, citing the progress of Europe and India in generating high PET collection rates, but added that “it’s not going to be an easy journey” in Southeast Asia, which home to three of the world’s five biggest plastic polluting nations.

“We need partnerships to help us scale and get there [hit recycling targets]. But there’s a lot of commitment from many other companies, and that gives us hope,” she said.

A big challenge for Coke and other plastic producers will be building a bridge between Southeast Asia’s informal waste-picking sector—which is responsible for 65 per cent of waste collection efforts in the region—and the corporate world. Ford said that a key challenge would be in trying to improve the livelihoods of this sector, a typically poor and undervalued yet critical part of urban and rural community wellbeing in the region.

Responding to Eco-Business’ question about the price of recycled PET—recycled material is now more expensive than virgin plastic to buy, driven by the cost of collection and the demands of consumer goods firms for high quality recycled material—Ford said that Coke had made a commitment to use more recycled material, “and we’ll have to deliver to that [commitment].”

“We need to make sure that the value chain works, and those costs [of recycled plastic] are considered in our business model,” she said.

Eco-Business suggested that as demand for recycled plastic grows, so the costs are likely to come down due to economies of scale. Ford commented: “There’s a circular economy [for recycled plastic], but it remains to be seen what those costs will look like [over time].”

Ford confirmed the news, revealed by Eco-Business, that Coke is restructing its sustainability teams in Southeast Asia to better manage its expanded commitments on plastic waste.

“We do have additional resources for sustainability, and in Southeast Asia we’ve just established a position on sustainable packaging [and extra manpower will help achieve that goal],” said Ford.

Coca-Cola is part of a consortium of companies, including PepsiCo, Procter & Gamble, Unilever, Danone, and Dow that last October pooled US$90 million into a fund managed by investment management firm Circulate Capital to improve recycling infrastructure in the region.