Cleaning products often contain chemicals that harm humans and the environment. One severe allergic reaction prompted the man behind Pipper Standard to develop a range of natural cleaning products from pineapples. Here’s how he did it.

Most people would not look at an assortment of fruits and wonder how they can be used for washing clothes and dishes.

But for former investment banker and scientist Peter Wainman, this has been a key preoccupation since early 2011.

Not only did the 46-year old American, who is today the chief executive officer of Thailand-based natural cleaning products firm Equator Pure Nature, consider it, he took it upon himself to find out.

Together with a chemist and microbiologist, he spent two years from 2011 to 2013 experimenting in his kitchen with a range of herbs and fruit such as roselle, tamarind and banana, trying to formulate safe and sustainable cleaning products.

Wainman’s quest to develop natural cleaning products was sparked by a severe allergic reaction in 2010 that led to asthma attacks and a burning sensation on his back for about seven weeks.

During this period, Wainman tried eliminating various foods and products that might have caused the allergy before finally discovering that he was allergic to a new fabric softener that his domestic helper had started using.

“Once I threw out my clothes, it got better,” he recalls, “It turns out that all chemical fabric softeners, to my knowledge, contain quaternary ammonium compounds (quats).”

“Since it is nearly impossible to remove quats, I destroyed my old clothes,” he adds. The chemicals have been given a “high concern” rating for their effect on human health and the environment by the Environmental Working Group, an American non-profit environmental research.

Medical experts have also noted that exposure to quats can potentially cause serious and preventable health problems, including contact dermatitis and asthma.

In the aftermath of his allergic reaction, Wainman and his wife decided to switch to natural cleaning products. 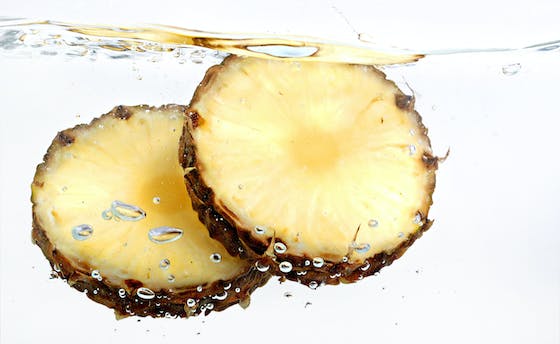 But he recalls: “When I was looking around, I couldn’t see anything that was natural and good at cleaning. Historically, truly natural products don’t work that well if you compare their cleaning abilities to chemical products - you will notice the difference.”

He adds: “Many of the brands that market themselves as ‘natural’ actually use lots of chemicals. That was when I said, ‘Hey, look, I think there’s a business here.’”

In early 2011, Wainman began his kitchen experiments, inspired by stories he had heard of hill tribes in Thailand, where he has lived since 2006 and has been doing business since 1996, using liquid derived from fermented fruit for cleaning.

He says: “The concept had been around for a long time, but there was no research out there of what fruit to use, what conditions are needed, how to optimise it.”

It took about two years before Wainman and his team found the right fruit - the pineapple – and successfully developed a fermentation process that yields natural organic acids, natural enzymes and biosurfactants, which are the substances which break down dirt and stains.

They filed multiple patents in 2013, and the following year, the Pipper Standard line of pineapple-derived cleaning products was launched in Bangkok supermarkets. The products are also sold in Singapore, Taiwan, China, Hong Kong, Macau, Vietnam, Myanmar, Laos and the Maldives. As of the date of this article, four United States patents have been issued.

Wainman hopes the products will go some way towards addressing allergy problems in these markets.

He notes that in Thailand, the percentage of children in Bangkok with allergies has increased from 33 per cent in 1998 to 49 per cent in 2007. The Allergy Asthma and Immunology Society of Thailand estimated that there were 18 million Thais with allergy symptoms in 2013.

Many of the brands that market themselves as ‘natural’ actually use lots of chemicals.

In Taiwan, allergic rhinitis in teenagers increased 50 per cent from 1995 to 2002, according to the International Study of Asthma and Allergies in Childhood.

Wainman adds that globally, allergy rates have dramatically increased over the last 15 to 20 years, and there are different theories about why that is.

“The company’s theory is that we have become overexposed to chemicals and our immune systems get hyper-stimulated,” he shares. “When that happens, everyday objects, like milk, wheat, egg, can trigger an immune response.”

Wainman adds: “That’s what an allergy is: a malfunctioning of the immune system. If we can decrease the amount of chemicals we’re exposed to, it may help to reverse this trend of increasing allergy rates.”

This is something Pipper Standard’s products aim to achieve. For one thing, they are made using a fermentation process which produces natural preservatives, which means there is no need to add harsh chemical preservatives that may cause skin irritation.

Clinical trials by third-party cosmetic research laboratory Dermscan Asia have also certified that the products are hypoallergenic and non-irritant. They also do not contain any allergens that are flagged by the US Food and Drug Administration’s approved allergen patch test.

The whole pineapple except for the stalk is fermented and, once the fluid is filtered out for use in the cleaning products, the remains of the fruit are used as animal feed. In turn, animal manure can be used to grow new pineapple crops.

Pipper Standard’s cleaning products are also certified by the Thailand Textile Institute to biodegrade more than 90 per cent after one month, and thus do not contaminate water or land after being discharged through the sewage system.

Besides ensuring that their products are safe for human health and the environment, Wainman and his team are confident about the cleaning efficacy of Pipper Standard products.

During the research and development process, the team had used a device to measure the intensity of stains on fabrics before and after they were washed with the pineapple-derived detergent. They found that Pipper Standard’s products clean as well as - or better than - the chemical varieties.

Wainman says: “We want to become the market leader in Asean and greater China.” The company is seeking its last investment round of USD3.5 million, he adds.

“Hopefully, over time, our products can help decrease the amount of chemicals that we’re exposed to. The more large-scale cleaning companies and industrial companies use our products, the more we can do this.”