Mangroves protect coasts, support fisheries and are rich carbon sinks. Can an upcoming pilot project in the archipelago incentivise communities to keep these valuable ecosystems intact?

The Philippines could be home to the first blue carbon project in Asia-Pacific that uses a ground-breaking method to calculate the amount of carbon stored in mangroves.

Blue carbon refers to carbon captured by oceans and coastal ecosystems such as mangroves and seagrasses, which are rich carbon sinks that store more carbon than terrestrial forests.

Carbon credits have been sold from mangrove restoration projects by other organisations elsewhere in Asia, such as the one by Worldview International Foundation in Myanmar.

However, existing methodologies traditionally used for terrestrial forests have, so far, only calculated the amount of carbon in the biomass (organic material) of the forests and trees, said Robert Baigrie, senior director and head of developed markets at Conservation International.

They do not take into account the significant amounts of carbon stored in sediments held in place by the root systems of mangroves. “So the difference (between) the existing methodology and what we call ‘blue carbon’, is that we’re valuing, for the first time, the carbon in those rich sediment layers,” he said.

The difference (between) the existing methodology and what we call ‘blue carbon’, is that we’re valuing, for the first time, the carbon in those rich sediment layers.

Initial feasibility assessments to determine the site have started, Nunez told Eco-Business on a recent work trip to Singapore.

The archipelago has lost about half of its mangroves to aquaculture, urbanisation and other human activities, but the saltwater-tolerant trees are said to have protected some Filipino towns from the worst damages inflicted by Typhoon Haiyan in 2013.

The Philippines will be Conservation International’s second pilot site in the world—the first is in Cispata in Colombia, which could start selling carbon credits by the first half of next year, said Baigrie. Before that, the methodology will need to be certified by Verra, a non-profit that manages the VCS (Verified Carbon Standard) Programme, which is the most widely used voluntary greenhouse gas reduction programme.

On how the idea for a blue carbon project in the Philippines came about, Nunez said the NGO was looking at opportunities to incentivise communities to keep their mangrove forests intact. After Typhoon Haiyan, the government also wanted to plant more mangroves. 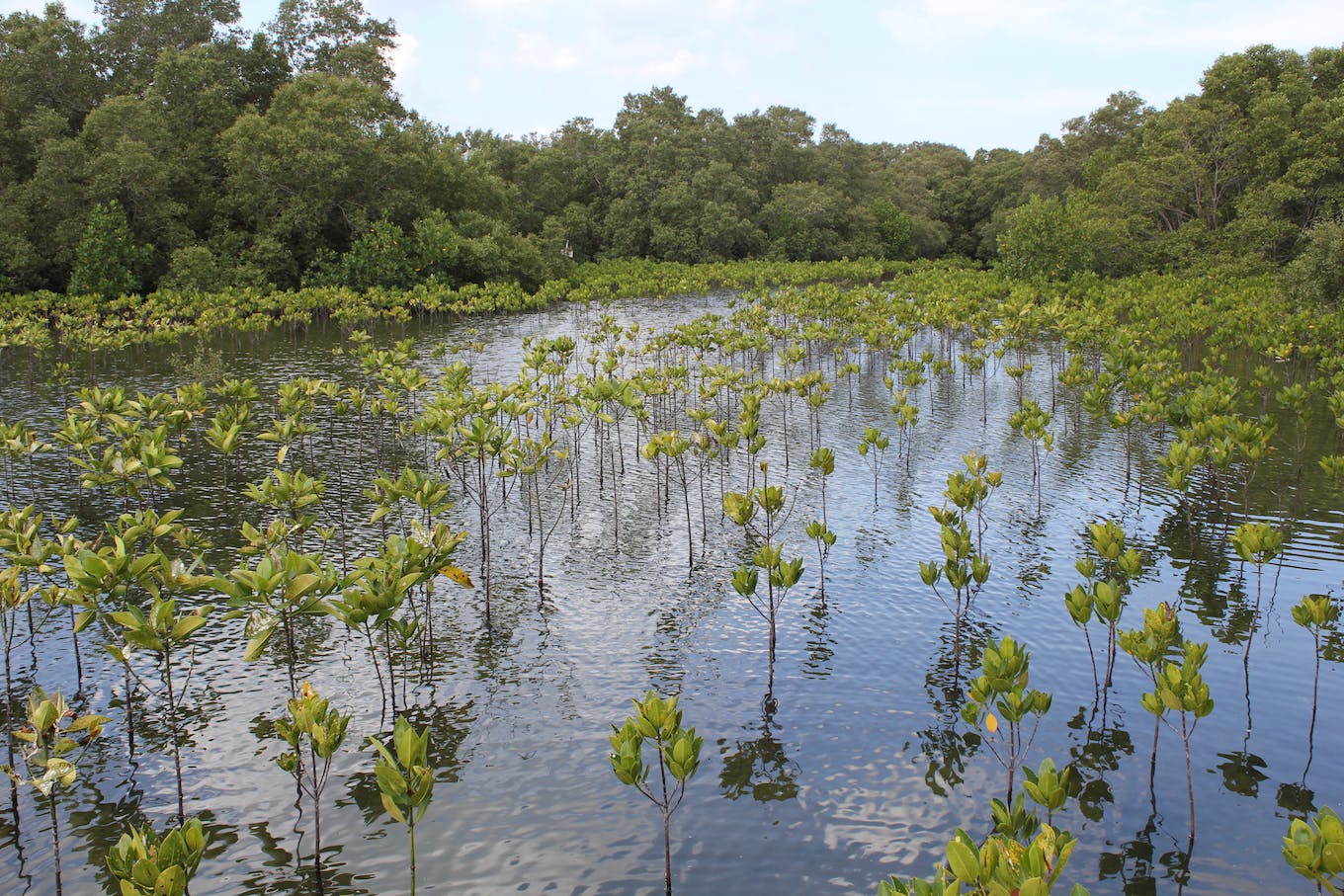 Conservation International initiated discussions with the Philippines’ Biodiversity Management Bureau, Climate Change Commission, Bureau of Fisheries and Ecosystems Research and Development Bureau to set up a technical working group on blue carbon, and wanted to demonstrate its feasibility through a pilot project.

Protection and restoration of forests and coastal ecosystems are among the nature-based solutions to fight climate change. Such solutions are massively underfunded but conservationists say they can provide one-third of the emissions reductions needed to meet the goals of the Paris Agreement. According to Conservation International, only 2 per cent of global financing aimed at addressing climate change goes towards natural climate solutions.

Baigrie said the NGO is still raising about 70 per cent of the funds needed for its blue carbon project in the Philippines.

Will blue carbon offsets take off?

Just as carbon offsetting has been controversial, some analysts have pointed out the risks of blue carbon offsets. Climate science and policy institute Climate Analytics has argued that the use of blue carbon offsets avoids the reduction of emissions needed in other sectors such as energy, aviation and agriculture, undermining the world’s ability to limit temperature increase to 1.5°C as set out under the Paris Agreement.

There are higher uncertainties in the measurement of carbon flows in coastal systems than other sectors, it said. And, as with other land-based sequestration, conservation of one area may displace deforestation or degradation to another area.

Schemes to incentivise the protection of coastal ecosystems should be designed with the full set of ecosystem services in mind, not just carbon sequestration, added Climate Analytics.

Conservation International’s carbon credit projects are coupled with Climate, Community and Biodiversity Standards, developed by an alliance of NGOs, that foster best practices and multiple-benefit approaches.

Baigrie said coastal ecosystems offer “enormous” biodiversity and community benefits, such as coastal protection and nursery habitats for fisheries. “In the usual development of our conservation projects, the carbon trading element is normally a later-stage decision … as we try to identify potential funding streams that can help make that work sustainable,” he said.

Local communities, whose buy-in would already be secured, will also receive proceeds from the sale of credits. “When the credits are sold, the funds raised from the sale flow back to the field and provide support for all the conservation and community outcomes of the ongoing programme work there,” said Baigrie.

“If the pilot project, as this one would be, is successful, then there’s an opportunity to scale that solution (of trading blue carbon) up into a lot of places where we may not have been working.”

Because there are no regulations compelling companies to offset their emissions, there has long been more supply of voluntary carbon credits than demand, Baigrie added. But with more firms setting carbon-neutral targets, he is hopeful that “this balance will change significantly, and soon”.