As the devastation and death toll wrought by Super Typhoon Haiyan on the Philippines continues to rise, climate change commissioner Yeb Saño demands climate action and financing from developed nations at the start of the global climate change talks in Warsaw

Massive destruction is everywhere in the Philippines’ central region after super typhoon Haiyan (local name: Yolanda) made not one but six landfalls in the country, providing a sordid backdrop for the opening of the 19th Conference of the Parties (COP19) to the United Nations Framework Convention on Climate Change (UNFCCC) in Warsaw, Poland on Monday.

Lead negotiator for the Philippines Yeb Saño, head of the country’s Climate Change Commission, spoke at length with Eco-Business a day after the typhoon hit on Friday and said: “The COP19 in Warsaw must deliver on enhancing ambition and should muster the political will to address climate change.”

“Yolanda, so far, has raised widespread consternation here at the climate talks,” he added. “As the Philippines engaged in preliminary meetings, overwhelming expression of solidarity with the Philippines has been brought forward by many countries around the world. This tragedy must serve as a catalyst for pursuing success in Warsaw. This notwithstanding, I have no illusions that even the suffering of the most vulnerable countries is enough to reverse the political apathy of the rich countries on climate change.”

Saño explained that the super typhoon “is already a manifestation of a climate system gone awry”.

“More super typhoons will be seen in the coming years as the waters of the Earth’s oceans continue to absorb more of the warming,” he noted.

Natural disasters and the new norm

Indeed, local weather experts considered Haiyan as possibly one of the world’s most powerful storms in the past century. International meteorologists also debated the issue, surmising it could be one of the strongest tropical cyclones to have ever hit land, with winds of up to 380kph, according to the Guardian.

The call for climate justice is a call to hold accountable the countries responsible for the climate change crisis, which was brought about by the industrialization of the North. Clearly, vulnerable countries like the Philippines, that have very little contribution to the heat-trapping greenhouse gases in the atmosphere, bear the brunt of the adverse impacts of climate change

Yeb Saño, Climate Change commissioner of the Philippines and chief negotiator for COP19

In comparison, Hurricane Sandy that hit New York and New Jersey in the United States last year sustained winds of about 152kph to 185kph, while Hurricane Katrina – initially a Category 5 storm, which is the highest in the scale, like Haiyan – had winds of around 207kph upon hitting land, making it instead a Category 3 storm.

According to Dr Vicente Malano, officer-in-charge of the Philippine Atmospheric, Geophysical and Astronomical Services Administration (Pagasa), typhoons usually make one landfall, slowing down as it hits landmass and moves away. But, in the case of Haiyan, the super typhoon gathered intensity as it passed through the waters in between the islands of the Visayas, the country’s central area further south of the capital of Manila.

In some provinces, like the hard-hit coastal city of Tacloban, five to six-metre high storm surge waves added to the havoc.

This unusual path of destruction has left 10,000 people dead, although current estimates are still unconfirmed. Infrastructure damage estimates also are uncertain since assessment is proving to be difficult with impassable roads and broken lines of communication.

Saño said: “Climate change has resulted in a shift in the way the Philippine climate behaves – official studies indicate that the ‘typhoon belt’ has moved southward. The trend is that most typhoons are now crossing central Philippines (which means Southern Luzon-Bicol, Visayas, and Northern Mindanao).”

“Typhoons such as Yolanda (Haiyan) and its impacts represent a sobering reminder to the international community that we cannot afford to procrastinate on climate action,” he stressed.

“The IPCC report on climate change and extreme events underscored the risks associated with changes in the patterns as well as frequency of extreme weather events. Science tells us that simply, climate change will mean more intense tropical storms. As the Earth warms up, that would include the oceans. The energy that is stored in the waters off the Philippines will increase the intensity of typhoons and the trend we now see is that more destructive storms will be the new norm.”

To prevent such storms and other climate change risks, the Philippine commissioner, who made news at the climate talks in Doha in 2012 for his impassioned speech due to the damage and over 1000 deaths caused by Typhoon Bopha days before, noted how this “curse” of natural disasters must be broken. 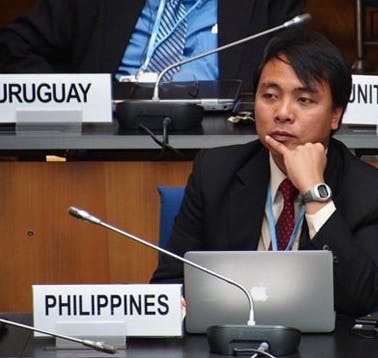 “Developed countries must show that they are fulfilling their commitments to fulfil the objective of the climate convention in order to avert the kind of future where super typhoons will become a way of life for Filipinos.”“This is only possible if the global community pursues an emergency climate pathway that prevents warming from going beyond the dangerous 2 degrees Celsius threshold above pre-industrial levels,” he explained.

Most of the affected provinces are rural communities, whose meagre livelihoods are dependent on agriculture and fishing. Haiyan not only exacerbates the reality of a climate change crisis, but also of the development crisis, Saño said.

“Disasters are not merely a function of hazards like rainfall, fast-onset floods, typhoons, ground movement, storm surges, and such. It is much more a function of people’s vulnerability: difficult socio-economic conditions, lack of livelihoods, lack of choice but to live in high-risk areas, lack of access to basic services like health, education, lack of community organisations, and lack of emergency and disaster management systems,” he outlined.

This is why the Philippines is asking for climate justice, Saño said. “The call for climate justice is a call to hold accountable the countries responsible for the climate change crisis, which was brought about by the industrialization of the North. Clearly, vulnerable countries like the Philippines, that have very little contribution to the heat-trapping greenhouse gases in the atmosphere, bear the brunt of the adverse impacts of climate change.”

“As such, here in Warsaw we will insist that developed countries fulfil their commitments especially in providing the resources necessary for developing countries to cope with the vagaries of climate change,” he emphasised.