Indofood is Indonesia’s biggest food company and one of the largest palm oil growers in the world. The company is connected to PepsiCo through a joint venture which makes it the sole manufacturer of PepsiCo’s snack products in Indonesia.

The company’s plantations cover a total area of 246,000 hectares in Sumatra and Kalimantan and it has been expanding aggressively over the past eight years by an average of 10,000 hectares of new palm oil plantations annually.

They said that the report’s findings “highlight a pattern of egregious labor violations on palm oil plantations across the globe”.

Robin Averbeck, senior campaigner, RAN, said that “this report reveals that Indofood is violating the fundamental rights of workers on its palm oil plantations, as PepsiCo watches on”. The conditions on the Indofood plantations reflect “a disturbing system of abuse, where workers’ rights are rarely respected”, she added.

Both PepsiCo and Indofood side-stepped these claims. In responses published in the report, PepsiCo pointed to its Palm Oil Action Plan, launched last year, which says that all its palm oil suppliers in its supply chain must uphold human rights standards, and are not allowed to use forced or child labour on their plantations.

“The company takes these commitments and any labour and human rights concerns raised very seriously,” it said.

While it claimed to have a “history of appropriately engaging on such matters”, it did not elaborate on how it plans to investigate or address the report’s findings. It also did not respond to an Eco-Business query for details by publication time.

RAN also noted that since Indofood is technically a joint venture partner and not a supplier, PepsiCo does not require Indofood to implement company-wide requirements for sustainable palm oil. It only has to ensure that responsible palm oil is used to make PepsiCo’s products.

Indofood, too, declined to comment on the report, saying that as far as it is concerned, it has complied with all Indonesian laws and regulations.

However, the report’s findings show otherwise.

Investigators found that instead of hiring workers on a permanent basis and paying them fairly, Indofood’s subsidiary frequently hires people on casual or limited-duration contracts even for core jobs such as harvesting fruit, and applying pesticides and fertilisers.

About half the workers interviewed by investigators had temporary contracts, or none at all. This arrangement pays less than half of what permanent a permanent position would, and offers employees no job security.

Investigators found that about half the workers they interviewed were on contracts that offer no long-term job security or had no formal employment status. Image: RAN

At one of PT PP London Sumatra’s plantations investigated, the company violated the district’s minimum wage laws by paying workers between 20 and 75 per cent less than the required amount.

Investigators also found that plantation owners have flouted Indonesia’s laws on child labour, which set the minimum age for work at 15, and only allow hazardous work from age 18 and above.

They observed children as young as 13 years old working on plantations, and interviewed one 19-year old who said he had worked there since he was 12. 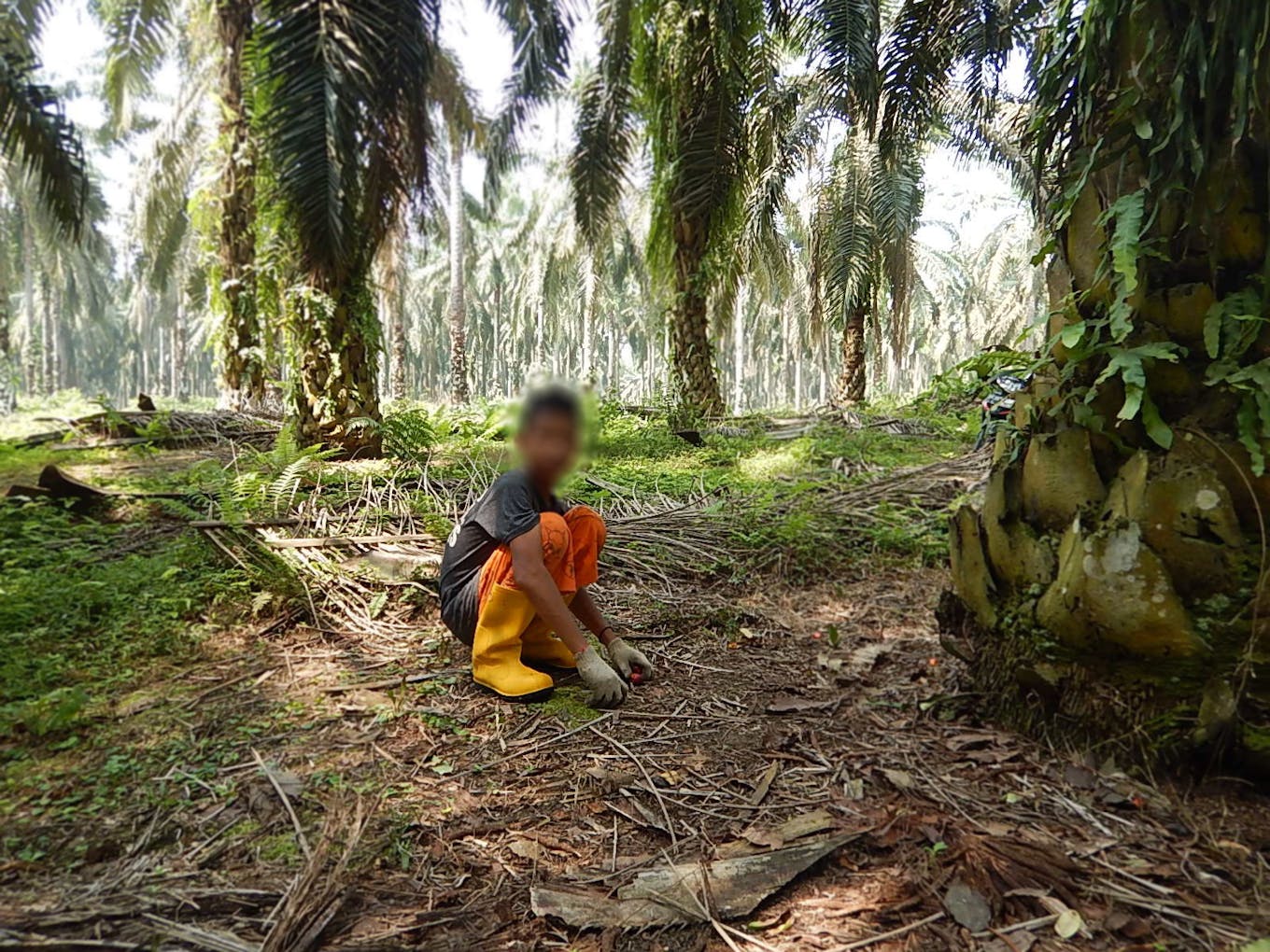 Much of this child labour was motivated by unreasonably high quotas imposed on harvesters, the report found. These workers must collect a minimum weight of fruit to be earn their wage.

In less productive periods, harvesters need to cover a larger expanse of plantation to reach their daily quota. This is when they may pull their children out of school to help out, and enlist their wives as well.

This report reveals that Indofood is violating the fundamental rights of workers on its palm oil plantations, as PepsiCo watches on.

Many workers said they did not receive health and safety equipment from plantation owners, even for hazardous tasks such as spraying highly toxic pesticides or applying fertilisers. Several employees said they purchased basic shoes and gloves with their own money.

All employees said they were not given health insurance - though this is not standard practice in the industry - and when they faced health problems arising from their work, they had limited access to on-site company health services. 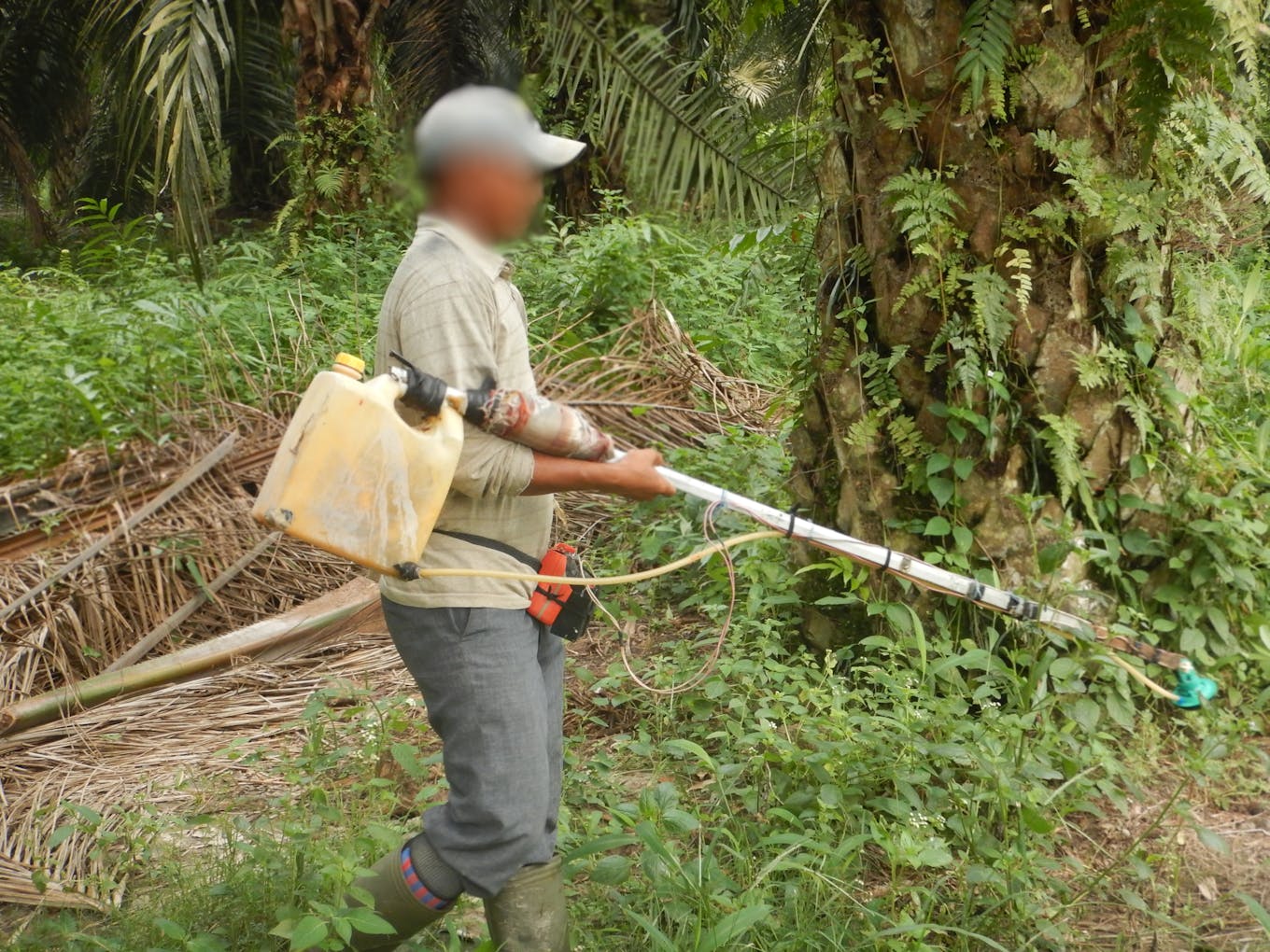 A pesticide sprayer works without protective equipment. Some pesticides used by Indofood include Paraquat, a highly toxic substance which has been banned in the EU and several other countries. Image: RAN

PT PP London Sumatra also reportedly violated an international ruling that employers are not allowed to intervene in the union membership of workers. Indonesia has ratified the International Labour Organisation’s convention which guarantees the Freedom of Association for workers.

Permanent plantation staff told investigators that they had been automatically enrolled in an employer-dominated union when they joined the company, and had fees deducted from their paychecks without their consent.

This union did not represent their interests, and when workers tried to approach independent unions, they said they were intimidated by the company.

“PepsiCo and Indofood may not be fully aware of the practices outlined in this report, nor condone them,” the authors acknowledged. But Averbeck said that “both companies must act without delay to address the egregious worker abuse exposed on Indofood’s plantations”.

PepsiCo is widely regarded by green groups as a laggard on palm oil sustainability. Despite its extensive sustainable Palm Oil Action Plan which the company says will help it achieve zero deforestation, it ranked last on a palm oil scorecard released by Greenpeace in March.

There was little evidence that Pepsico’s palm oil is deforestation-free, and the company fares poorly on tracing its supply back to its source Greenpeace found. Traceability information is essential to ensuring that a company’s palm oil is not grown on illegally cleared land. It also said the company needs to do more to ensure that suppliers comply with its policy.

The labour abuse report’s authors added: “Indofood is now the largest private palm oil company in Indonesia that has not strengthened its policies or improved its practices to align with the new benchmark for responsible palm oil”.

To spur these companies to act, RAN is collecting signatures on a petition urging PepsiCo chief executive Indra Nooyi to address the issue urgently.

The investigative group also called on the Indonesian government to do more to protect workers in the palm oil sector, a major source of revenue and jobs for the archipelago nation.

Herwin Nasution, executive director, OPPUK, noted that “as such a major employer in the country, the Indonesian government should enact specific labor laws to protect palm oil plantation workers, who face unique and heightened risks from their geographic isolation”.

Most urgent is the plight of women and child workers, said Nasution. They “perhaps suffer most under the impossibly high quotas and unethically low wages,” he added.