An MOU could pave the way for Singapore to offset its carbon emissions by conserving Papua New Guinea's rich forests, though high local land ownership in the Oceania country calls for caution.

Singapore and Papua New Guinea will work towards building a carbon market between the two countries, according to a deal signed by ministers of both countries on the sidelines of the COP27 climate summit in Egypt.

The memorandum of understanding calls for work on rules that the two countries can rely on to send and receive carbon credits, capping off months of bilateral discussions on the matter.

Singapore and Papua New Guinea, both Asia Pacific countries, will also start identifying potential carbon projects that can support both countries’ climate goals. A working group comprising officials from both nations will be created to oversee the work. 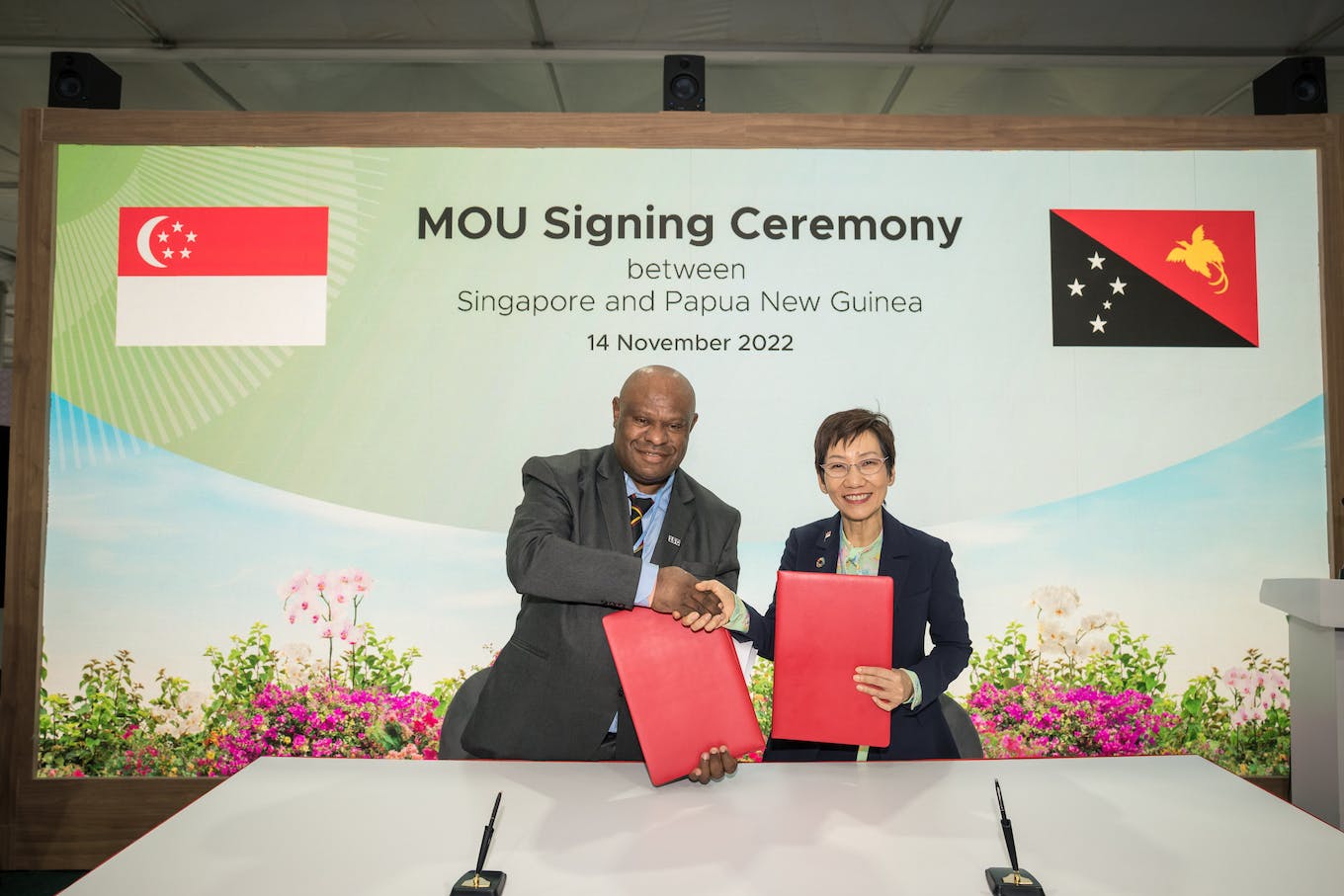 The eventual carbon trading between the two countries is to be aligned with a global system known as Article 6 of the Paris Agreement, meant to standardise rules, promote global trade of carbon credits and boost climate mitigation.

The broad strokes of Article 6 were drafted in last year’s COP26 summit in Glasgow, but negotiations on the details are still ongoing at COP27.

Singapore is discussing similar carbon trading deals with about 20 countries, according to London-based Quantum Commodity Intelligence. The city-state, which sees buying international carbon offsetting as a key strategy towards getting to net-zero emissions by 2050, has also signed agreements with countries like Colombia and Vietnam this year.

Papua New Guinea, a likely seller of carbon credits, is also in talks with countries like Australia and Japan, even though it has a moratorium on private carbon offsetting deals while it reviews its rules.

The Oceania nation, situated north of Australia and neighbouring Indonesia, has over 90 per cent of its 463,000 km² of land covered by forests, but logging and commercial farming in the early years of this century have caused 0.5 per cent of its forests to be lost annually, according to a US-based group, Coalition for Rainforest Nations.

While protecting threatened forests could help avoid emissions and generate carbon credits, 85 per cent of Papua New Guinea’s land is under customary ownership by local communities, not the government.

Bernt Nordman, Article 6 lead at environmental group WWF, said that governments must include local communities from the start of carbon projects if they are planned on customary land.

Key Article 6 issues meant to be resolved at COP27 remain open questions, including the types of carbon crediting projects that will be allowed, and the details of how carbon credits from a previous attempt at a global market, which has less stringent rules, can be ported into the new system.

Nordman said WWF is also concerned about whether parties can agree on a transparent and efficient database system to track the flow of carbon credits. Reuters had reported that while the European Union wants a central body, the United States wants a distributed system.

Nordman added that many parties are concerned that recommendations for how carbon dioxide removal from carbon projects should be tracked and tabulated are not to standard. There are fears that radical solutions like those attempting to geo-engineer the seas to store more carbon could make it as Article 6 projects.

Some countries also tabled new discussion points at COP27, such as whether an approved carbon project can drop its certification.

“A lot has to be done during week two [of COP27] to get Article 6 on a good track,” Nordman said.

But he added that the decisions already settled at COP26 last year do provide sufficient guidelines to start building partnerships in carbon markets.

“Implementing Article 6 takes time and it is good to start now. It is important that early movers share their experiences and report on the need for more detailed guidance,” he said.

Along with Singapore, countries like Japan and Switzerland have been developing bilateral carbon offsetting deals.

Observers at COP27 say that beyond bilateral deals, a global-scale carbon projects trading platform, also envisioned by Article 6, will likely take until 2024.