Meet the Asian women driving progressive change across the region

Women have been at the forefront of the fight for human rights for centuries but till today, we don’t often hear their names in Asia. This International Women’s Day, Eco-Business celebrates the work of Asia’s unsung heroines.

A quick google search on female activists in Asia doesn’t turn up many results, even though many Asian women have made history for breaking gender norms while many more today continue to fight against all odds to achieve greater rights for women and other marginalised communities.

To mark Women’s History Month and International Women’s Day, Eco-Business hopes to change this by recognising the contributions of Asian women to the global women’s movement and the work they do to build a more just and sustainable world.

In these turbulent times, marred by environmental degradation and deepening social inequality, women make up the growing number of leaders and activists who are defending their land and communities against the incursions of the rich and powerful, while others continue to lead the charge for progress on gender equality, climate action and social justice.

From halting the expansion of coal to providing education for indigenous children in the remote jungle and starting the conversation about sexual harassment, Eco-Business highlights several women defending human rights and driving change across different industries.

Here are seven Asian women you should look out for this International Women’s Day.

Having grown up near a coal plant, Nguy Thi Khanh, Vietnam’s leading female environmentalist knew firsthand the downside of her country’s reliance on the fossil fuel. Many people in her community developed cancer because of the air pollution from coal plants and she has spent her life coaxing her country away from dirty energy. 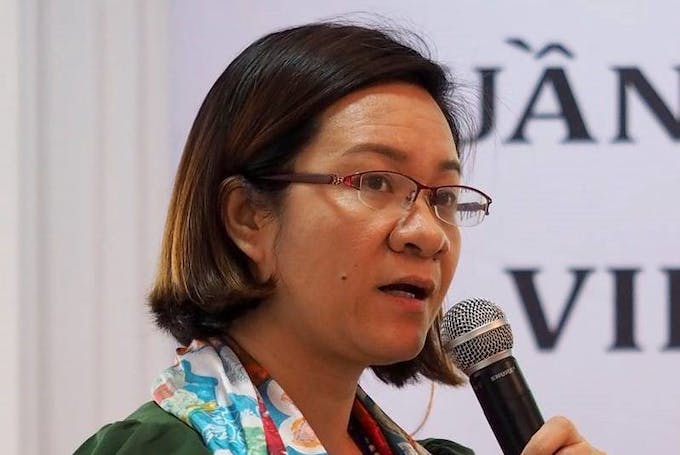 Nguy Thi Khanh is known for her tireless work pushing the Vietnamese’s government to move away from coal. Image: Nguy Thi Khanh

In 2011, after years working to limit water pollution from mining and other industrial sources, Khanh founded the Green Innovation and Development Centre (Green ID) to promote sustainable energy development and better water and air governance in Vietnam as well as educate rural communities on renewable energy.

She was also awarded the Goldman Environmental Prize in 2018 for her work with the Vietnamese government on long term strategies to shift the country away from coal.

While she has been recognised as a grassroots activist at home and abroad, Khanh, in her admiration of youth climate activist Greta Thunberg, admits in an article that the Swede’s brand of activism “is not possible in Vietnam.” She has had to drive positive change without getting in trouble with the authorities and well-connected energy giants, who have targeted her in smear campaigns.

Despite the odds, Khanh and her team convinced the Vietnamese government to take away 20,000 megawatts of coal power from the national energy plan by 2030.

Journalist and gender rights activist Bandana Rana has been working to eliminate discrimination and violence against women since she first documented the stories of rural women as a television reporter 30 years ago. 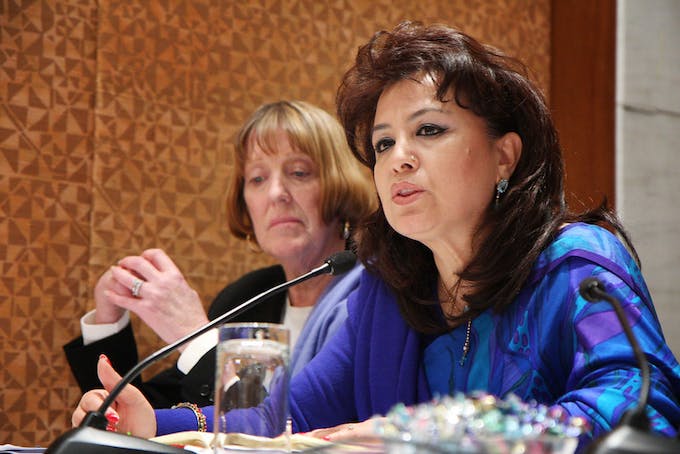 Bandana Rana is the founder of Saathi, a women’s rights organisation that tackles violence against women and aims to empower women with economic opportunities. Image: Flickr

Today, she is the co-founder of Saathi, a prominent non-profit women’s rights organisation working on domestic violence in Nepal, and Sancharika, a forum for women journalists that trains local media to dispel stereotypical perceptions of women and promote equity in society.

Rana is also the first Nepali woman to be elected as vice-chairperson at the United Nations Committee on the Elimination of Discrimination against Women (CEDAW), which acts as an international bill of rights for women.

“As a citizen of a small South Asian country, I take that perspective to a global scale,” she said in an interview with the Nepali Times, adding that her work as a communicator allows her to simplify the legal jargon of CEDAW documents, which paves the way for more constructive dialogue.

Today, more women are openly talking about domestic violence and sexual abuse — topics which were previously taboo in Nepal, she said.

“Things have changed now, and the women who spoke up have encouraged others, especially younger girls, to speak out.” 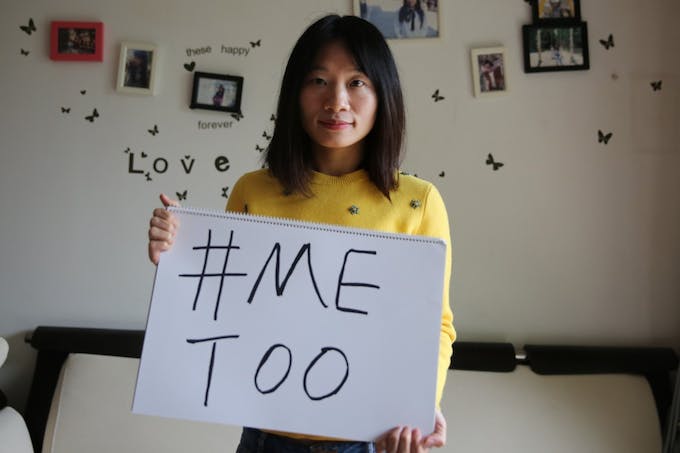 Sophia Huang Xueqin was the first to bring sexual harassment in the workplace to light in China. Image: Thomas Yau

While much of the world’s attention has been on the #MeToo movement in the United States, where it began, the momentum against sexual harassment has been building up in China, where journalist and activist Sophia Huang has been leading the fight for the past three years.

In 2017, Huang, who worked as an investigative reporter for Chinese-language news outlets, conducted a nationwide survey to find out the extent of workplace harassment in China’s media industry, and started an online platform where victims could share accounts and information on sexual harassment.

The following year, she produced “Workplace harassment of women journalists in China,” an investigative report that revealed how more than 80 per cent of female journalists had been sexually harassed at work.

Last year, the figure who brought #MeToo to the Chinese public was detained after participating in protests against the anti-extradition law in Hong Kong; the authorities accused her of “picking quarrels and provoking trouble.”

Huang was released in January after three months in detention. 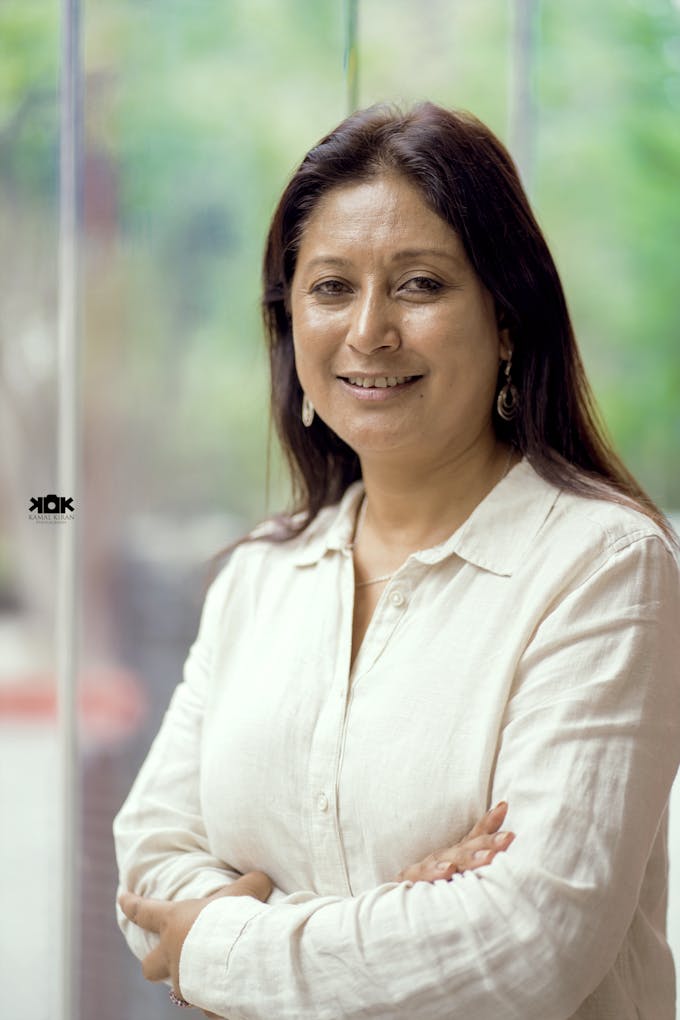 Hasina has saved tens of thousands of women and children from being trafficked across the region. Image: Hasina Kharbhih

She’s been attacked and her office ransacked multiple times, but that has not stopped Hasina Kharbih from her work to end child trafficking across India’s Northeast states, which are a source, transit and destination point for cross-border trafficking in the region. In India, human trafficking makes up a $32 billion industry, of which female minors comprise 40 per cent of sex workers.

“There is a different dimension of problems that you have to deal with especially when you are a woman challenging the male dominated system,” she told Eco-Business. “It was never easy but I hope to see more women in this field establish themselves because no gender should qualify a position or space.”

Through her organisations the Impulse NGO Network and Impulse Social Enterprises, she has saved over 72, 000 people through the internationally known Impulse Model and empowered more than 30, 000 women artisans. Kharbhih believes that making women economically self-sufficient by creating sustainable livelihoods goes a long way in preventing unsafe migration and human trafficking.

When asked what she feels about the global women’s movement, she said: “I think there is nothing more noteworthy or powerful than women taking a stand for each other. The fact that women have started to speak up and voice their opinions from different parts of the world is an achievement in itself. Women’s issues are global and many countries are recognising it. We still have a long way to go but as long as we do it together, we shape a better future for each other.” 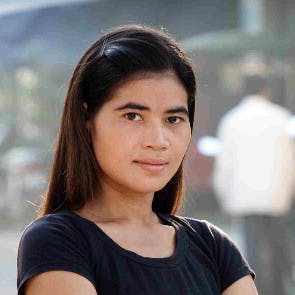 Tep Vanny is well-known in Cambodia for her activism in defending human and land rights. Image: Frontline Defenders

Land rights activist Tep Vanny has been fighting for her community, the Boeng Kak lakeshore community, since 2007 after the Cambodian government granted a land concession to a local tycoon and Chinese company to develop a luxury residential and commercial space. Since then, most of the 4,000 resident families on the land have been forcibly displaced.

Leading an army of mostly women from her community, 38-year-old Vanny has been the face of protests against the evictions and continues to fight for justice so that every displaced family receives legal rights to their land.

In 2016, while protesting against the arbitrary detention of human rights defenders in Cambodia, she was arrested by the authorities and later sentenced to two and a half years in prison for previous charges. She was released in 2018 after a royal pardon from the king.

Vanny was the 2013 recipient of the Vital Voices Global Leadership Award which honours groundbreaking women “standing on the frontlines of change and creating solutions to some of the world’s most intractable problems.” 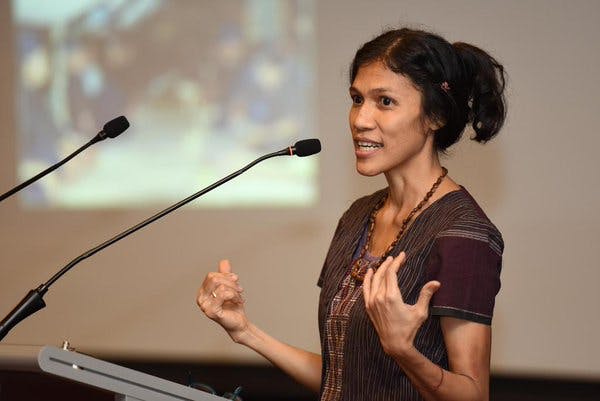 An adventurer and nature lover, Butet Manurung is well-known in Indonesia for her activism that has raised awareness on indigenous communities and provided alternative education for indigenous children in remote jungles across the archipelago.

Manurung runs training programmes that focus on improving understanding of indigenous communities in Indonesia so that universities, non-governmental organisations and companies can work in favour of local communities.

She started Sokola Rimba, or Jungle School, in 2003 in order to equip isolated tribal communities with skills in both literacy and advocacy. To date, Sokolo has benefited over 10,000 indigenous children and adults across eight provinces in Indonesia.

“We realised that it was of most importance to help indigenous peoples manage their own issues, and to support them in organising their own communities to fight for their rights,” said Manurung in an interview. “We now support communities to self-identify problems, and we work to establish a network so that they can overcome the issues as a community.”

Butet received the UNESCO Man and Biosphere Award in 2001 and the TIME Magazine Hero of Asia award in 2007.

Companies are all about diversity and inclusion these days, but Nurul Jihadah Hussain wants to make sure they go beyond being corporate buzzwords and affect real change in offices, businesses and boardrooms in Singapore. 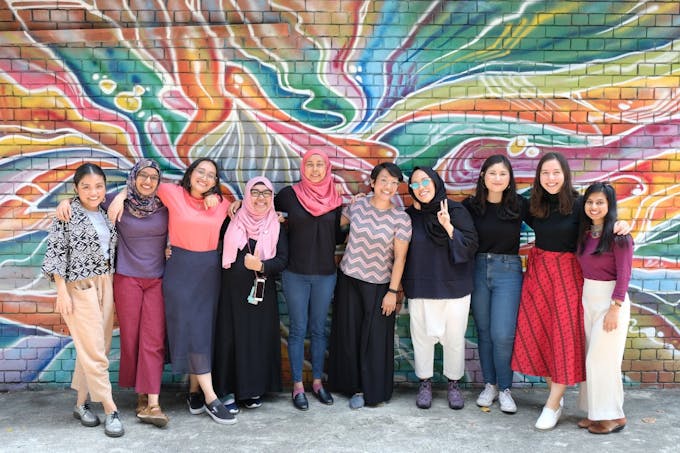 Recognising that minority and Muslim women were underrepresented in tech, she founded The Codette Project in 2015, a non-profit, ground-up initiative that aims to build a more inclusive tech ecosystem.

Through events, workshops and hackathons, The Codette Project aims to provide more support and opportunities for minority Muslim women to develop skills in tech, which she believes is the most level playing field today considering “tech is in every industry.”

In 2018, her organisation ran Singapore’s first women-only hackathon, Tech for Good, which sought to build a safe space for women of all backgrounds to come together and provide innovative tech solutions to address social issues.

When asked what gives her hope today, she said: “Being successful as someone from a minority is a daily act of resistance, because it means that your success is something that is not commonly imagined. Your existence in places and spaces where you don’t see anyone who looks like you is a struggle. But I see more and more young women doing that and more people being allies to those women. That gives me a lot of hope for the future, that diversity will one day be taken as essential and normal.”

International Women’s Day (March 8) is a global day celebrating the social, economic, cultural and political achievements of women. This year’s theme is #EachforEqual. Do you have a story to tell us about a woman who has transformed your community for the better? Tell us in the comments below.