The Federal Government of Malaysia has declared the man-made island development off the coast of Johor a duty-free zone with a slew of corporate tax incentives offered to qualified companies and developers.

“To ensure the success of Forest City, I am pleased to declare duty free zone area at Forest City, enabling local residents, businesses and tourists to benefit from the work, live and play environment,” said Malaysia’s Prime Minister Dato’ Seri Najib Tun Razak in a statement. Najib officiated at the grand opening of the project on Sunday with Johor’s Sultan Ibrahim Sultan Iskandar.

The project, worth around RM450 billion (S$169 billion), is 60 per cent owned by Country Garden, one of China’s largest real estate developers, and 40 per cent by the Esplanade Danga 88, a holding largely owned by Johor’s Sultan.

Developers envision the project as a smart city with “lush vertical greenery covered with dense foliage” supported by highly-efficient public transport and “sustainable and renewable energy infrastructures”, it said on its website.

Najib said Forest City and other development projects in Johor will fuel growth for the state. The Forest City project alone is estimated to provide 220,000 jobs for Malaysians in the finance and e-commerce sectors by 2035.

“I believe that Johor’s future economy is in good hands with these projects, which will certainly change the state into a new economy powerhouse,” he told Malaysian media. 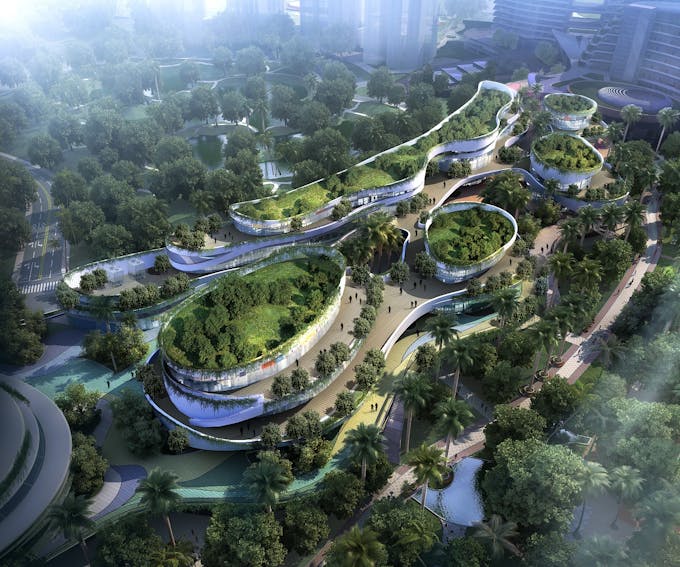 Green developers and green development managers that qualify for the incentives will enjoy 100 per cent income tax exemption up to 2028 and should have projects that follow internationally-recognised green building certification standards, in addition to the green building guidelines set by the Iskandar Regional Development Authority, the Forest City developers explained to Eco-Business.

Qualified companies or companies with Iskandar Development Region status in the tourism and MICE, education and healthcare sectors will also be offered tax incentives, while foreign investors will be given waivers on company equity restruction to claim these incentives.

Mo Bin, chief executive officer of Country Garden Holdings, commented, “With Forest City gazetted as a duty-free zone, it has boosted Forest City’s position as an international destination and put Iskandar Johor on the world map.”

A duty-free shopping mall and a five-star hotel will be ready by end of the year at the Fisherman’s Wharf on Island 1 of Forest City, while condominiums and high-rise coastal residences are now open to public preview and booking in Singapore, China and Malaysia, the developers added.

Forest City was mired in controversy in recent years. Locals are concerned of the reclamation’s impact to their community, which used to be a quiet fishing village, while the Singapore government has also raised issues about the project’s possible transboundary impact and damage to the marine environment.

Reclamation was halted in 2014 due to a lack of a detailed environmental impact assessment, but project developers resumed work last year after the Malaysian Department of Environment approved of its Environmental Impact Assessment (EIA) and Environmental Management Plan.