In the global clean energy shift, Australia has a critical role to play. The continent boasts vast renewable energy potential, yet it is home to only a small population, offering opportunities to turn it into the world’s battery.

Beyond plans to sell electricity transmitted to energy-hungry Asian nations, Australia is looking to become a leading producer and exporter of green hydrogen by 2030. In addition to meeting the rising demand for clean fuel domestically and overseas, this vision will also bring benefits to the Australian community and nation’s economic prosperity.

While it has been touted as the fuel of the future for the past fifty years, the wider adoption of hydrogen has had several false starts. Nevertheless, a growing number of scientists and investors believe that the falling costs of renewables, electrolysers and fuel cell technology, could help see green hydrogen become commercially viable.

“While countries committed to substantially reducing their emissions by 2030, they realised that they did not have enough tools in the toolbox,” said Alan Finkel, who served as Australia’s chief scientist until last year.

“Many people do not appreciate just how difficult it will be to decarbonise the global energy supply. It is an enormous task, and we have to use all available means to do so,” Finkel said.

From grey to green

For decades hydrogen has been pegged as a revolutionary, clean source of energy, capable of replacing natural gas as a source of heat, supporting power-hungry industry, cars and storing electricity. However, it has struggled to compete with fossil fuels in cost, due to the fact that hydrogen adoption in the wider market and industries still requires a push.

Several industries already use hydrogen gas in industrial processes, most commonly in the production of ammonia. Currently, traditional carbon intensive methods produce the majority of so-called “grey” hydrogen, creating about 830 million tonnes of carbon dioxide annually, according to the International Energy Agency (IEA).

So-called “green” hydrogen is produced by a clean process called water electrolysis. In this method, a device called an electrolyser splits water into hydrogen and oxygen molecules using an electric current from renewable sources. It produces no greenhouse gas emissions when it is burnt as a fuel and can be converted into ammonia for easy storage and shipping.

Pressure crunching on countries to drive down their greenhouse gas emissions and meet their commitments to clean-up, is driving investment in hydrogen.

Developing hydrogen for export is part of Australia’s wider efforts to wean its economy off its dependency on fossil fuels which raked in A$103 billion (US$73 billion) in export earnings in 2019.

Investment in hydrogen-related projects in Australia started to take off around 2018 with the government committing A$146 million towards developing hydrogen resources along the supply chain to “enhance Australia’s energy security, create Australian jobs and build an export industry valued in the billions”.

HyResource, a knowledge sharing-platform on Australia’s hydrogen industry, estimates that around A$1.5 billion has been funnelled into clean hydrogen projects by Australian governments, industry, and research institutions over the past three years.

There are five operating projects, 14 under construction or in advanced development and 38 projects under development as of May, according to HyResource.

Green hydrogen for homes and industry

Hydrogen Park South Australia (HyP SA), located in the Tonsley Innovation District about 20 km south of Adelaide, is the first project operating in this state, with three others under development.

HyP SA is an Australian-first facility to produce a blend of 5 per cent green hydrogen in natural gas for supply using the existing gas network.

The A$11.4 million project was delivered by Australian Gas Networks (AGN), part of the Australian Gas Infrastructure Group (AGIG), with funding of A$4.9 million from the South Australian Government.

The five-year demonstration plant commenced renewable blended gas supply to over 700 properties near the facility in May this year. It is also providing direct hydrogen supply to industry, and aims to supply hydrogen for transport in the future.

The introduction of green hydrogen reduces the amount of carbon in the gas supply network, without any changes to infrastructure or receiving household appliances, and lays the foundations for scaling-up green hydrogen projects elsewhere.

The success of this demonstration plant will be pivotal for South Australia, which has a reliable renewable energy supply and is working towards net zero carbon emissions by 2050.

At the heart of the HyP SA facility, is a 1.25 megawatt (MW) Siemens Energy Proton Exchange Membrane (PEM) electrolyser that splits water into hydrogen and oxygen using renewable electricity, capable of producing up to 20 kg of hydrogen an hour.

PEM electrolysers are a potential solution to tackle the variable conditions by renewable energy generation, according to Siemens Energy. Electrolysers can ramp up when renewable electricity is abundant and switch off when demand is high. Integrating electrolysers into the electricity networks could also support energy stability. 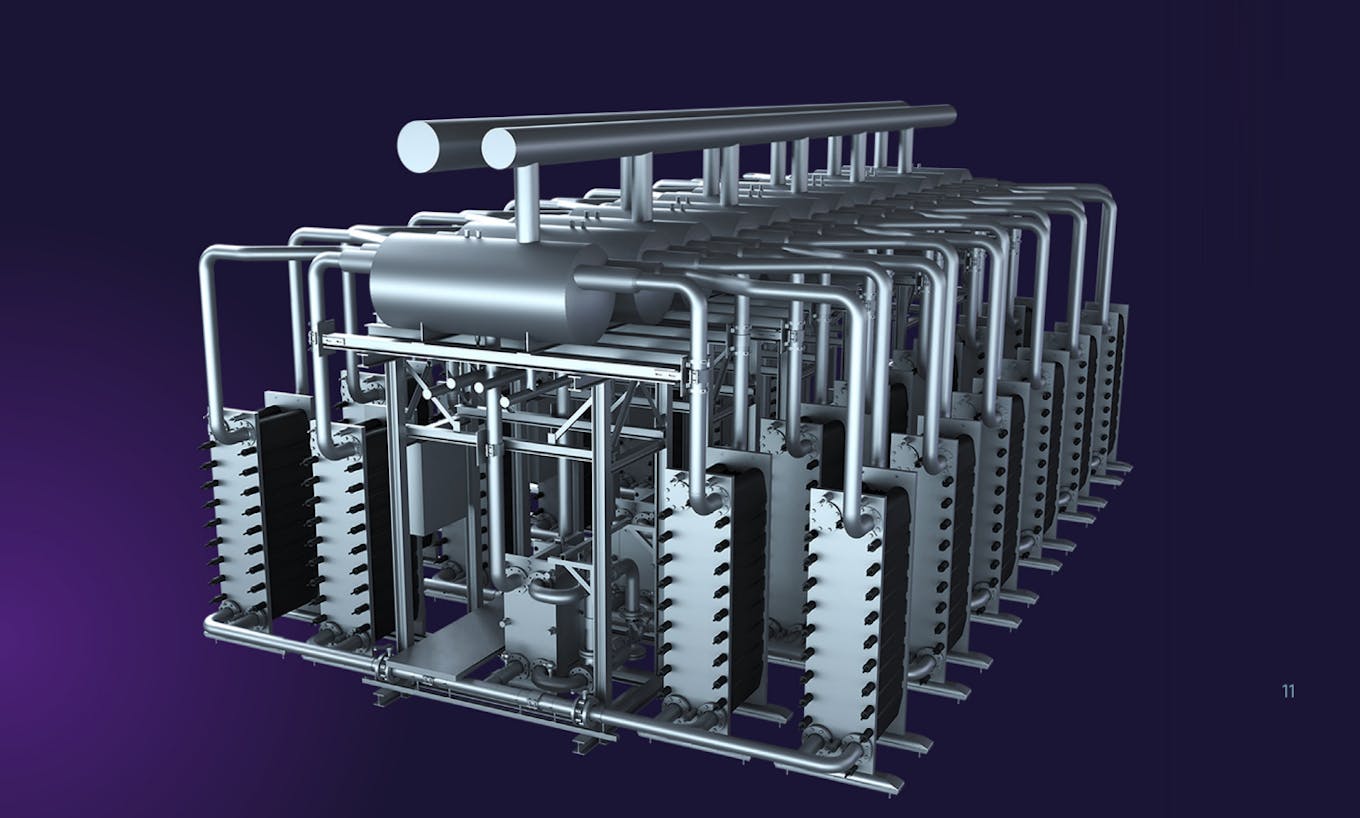 There are water resource considerations to take into account, particularly in areas where there is scarcity. The PEM electrolyser uses about 15 litres of water to produce one kg of hydrogen. For future developments, there may be potential use for the oxygen by-product – such as in wastewater treatment.

“It is imperative for hydrogen producers to carefully consider water availability, especially for larger plants in remote areas. We see the potential for wastewater recycling and desalination which would add a surprisingly small amount to overall project costs,” according to Michael Bielinski, managing director of Siemens Energy Australasia.

Nevertheless, cheap renewable energy needs to be rolled out fast enough for this technology to work. This might be difficult when demand from other sectors for wind, solar and other alternative power sources is expected to rise.

Scaling up for decarbonisation

The South Australia demonstration plant is paving the way for other states to decarbonise their gas consumption and has helped to build confidence in the industry that up to 10 per cent green hydrogen natural gas blend is suitable for current use in Australia without disruption to supply.

Two projects with a higher blend rate of 10 per cent green hydrogen are in progress at Hydrogen Park (HyP) Murray Valley in Wodonga, Victoria and Hydrogen Park (HyP) Gladstone in Queensland. HyP SA is also helping to establish a domestic market for renewable hydrogen.

However, the long-term goal is to transition domestic gas supply to 100 per cent renewable by gas by 2050, with a 2040 stretch target. Research by the Australian Hydrogen Centre is underway to understand the feasibility of 100 per cent hydrogen replacement of natural gas in Victoria and South Australia would look like. This also provides a strong signal to electrolyser manufacturers for the potential deployment of large-scale electrolysis.

Natural gas replacement in people’s homes is only one example of green hydrogen use. Part of its appeal is that it could reach parts of the economy other green fuels cannot.

“The electrons in electricity are incredibly versatile, almost magical, but nevertheless, there are limits.  By using zero emissions electricity to crack water, we can produce a supply of molecules that can take over where the electrons fall short,” Finkel told Eco-Business.

Finkel believes that hydrogen is the obvious solution for replacing the metallurgical coal in steelmaking that is responsible for 7 per cent or more of global greenhouse gas emissions.

“Ammonia made from clean hydrogen can be used as the chemical feedstock to make zero emissions fertiliser.  It is also the leading contender to replace the bunker fuel that powers the world’s maritime fleet,” Finkel said.

Many of the slated export-oriented projects include electrolyser capacities that are equal to or exceed 100 MW. In addition, other hydrogen-related developmental projects have sought environmental approvals for wind and solar generation capacities over 10 GW. Timelines are under development but experts expect few will be operational in the first half of this decade.

For applications that cannot be easily electrified, green hydrogen forms the bridge between renewable electricity and carbon neutral fuels. We have no doubt that clean hydrogen will be essential to power our world in the future.

The path to economically sustainable hydrogen

Despite being the most abundant element in the universe, hydrogen has faced its fair share of challenges. Risk management firm, DNV, identifies infrastructure and cost as two of biggest hurdles facing a transition to a global hydrogen economy.

The Australian government has set a stretch goal of ‘H2 under $2’, an ambition to reach price parity with fossil hydrogen. Including typical capital investments needed to prepare sites for electrolysis, green hydrogen can be produced for about A$6-9 per kg compared to “grey” hydrogen produced from traditional carbon intensive methods at A$1.40 per kg.

To achieve the price point of under A$2, electrolyser costs will need to fall from between A$2 and A$3 million per MW to A$500,000 per MW with the cost of electricity from solar and wind to half, according to Darren Miller, chief executive of the Australian Renewable Energy Agency (ARENA).

There is hope. Analysis by the IEA in 2019 found that the cost of producing hydrogen from renewable electricity could fall 30 per cent by 2030 as a result of the declining costs of renewables and the scaling up of hydrogen production. The cost of electrolysis equipment has fallen by around 40 per cent in the past five years while the price of solar alone has fallen by 85 per cent in the past decade.

“As more industries adopt green hydrogen energy, the total costs will continue to come down. The key to this is in scaling up production, efficient deployment methodologies and of course the ongoing reduction in renewable energy costs,” Bielinski said.

It is likely that full-scale plants will be powered by dedicated solar and wind resources depending on renewable energy requirements of all Australian hydrogen projects combined, including export.

“The key to cost savings could be hydrogen production facilities built jointly with wind/solar farms, so producers could generate power without incurring grid fees, taxes and levies,” according to analysis by Carolina Dores, co-head of the investment bank, Morgan Stanley European Utility team. While recognising that green hydrogen today is “uneconomical”, Morgan Stanley believes price parity is possible.

Developers and investors also need to factor in policy, regulatory approvals and practical issues that span construction, production, transport and storage and use, export, and demand-side regimes, according to a note by Allens, a law firm. Proving the safety case in both the workplace and for transport and storage remains key to scaling and widespread industry and community acceptance.

The Australian Energy Market Operator (AEMO), who provides forecasting and planning publications for the National Electricity Market (NEM) has developed the Hydrogen Superpower Scenario – placing the hydrogen economy within the realm of possibility.

“Clean hydrogen will be crucial in the global energy transition. For applications that cannot be easily electrified, green hydrogen forms the bridge between renewable electricity and carbon neutral fuels. We have no doubt that clean hydrogen will be essential to power our world in the future,” said Bielinski.

“As a company with a strong portfolio along the energy value chain, Siemens Energy can provide the expertise and innovative technologies that will advance Australia’s hydrogen future and lead the nation’s status as a major energy leader.”