A new study finds that the firm has reduced its emissions target and now lags rivals in the race to decarbonise. The firm recently came under fire when a senior staff member at the institute it sponsors was called out for climate denial.

Canon has scaled back its efforts to rein in its climate impact, according to a study of the Japanese photography and printing company’s greenhouse gas emissions disclosure data.

In newly submitted information to carbon measurement non-profit CDP, which charts the decarbonisation progress of firms in line with the goals of the Paris Agreement, Canon has effectively slashed its climate ambition in half.

Canon’s 2021 absolute emissions reduction target was 50 per cent from 2008 levels by 2030, which was in line with the Paris Agreement global warming limit of 1.5 degrees Celsius above pre-industrial levels.

However, the company’s new climate target is a 30 per cent cut from 2018 levels by the end of the decade.

When base year adjustments and different emissions scopes are taken into account, this represents an emissions cut drop from 50 per cent by 2030 to 23 per cent by 2030 – which is not Paris-aligned – analysis by Transition Asia, a non-government organisation that scrutinises sustainability commitments in East Asia, has found.

Canon appears to have lowered its ambition to match the current insufficient action.

Transition Asia modelled Canon’s current and recent business growth projections, energy efficiency improvements and energy consumption to forecast the firm’s emissions trajectory from 2022 to 2030. It concluded that Canon has lowered its climate ambition because it was failing to meet its original target.

Canon has been struggling to decarbonise because it has focused on improving product energy efficiency rather than increasing its use of renewable energy and lobbying for grid decarbonisation in its fossil fuel-dependent operational geographies of Japan and Southeast Asia, the report suggested.

It also noted that Canon has been working to “undermine Japan’s national climate progress” through the Canon Institute for Global Studies (CIGS) – a think tank it had set up to commemorate its anniversary in 2007 – by releasing “research opposing the expansion of renewables in Japan”. Earlier this year, its research director drew criticism for his views promoting climate denial. Articles posted on CIGS’s website have called the climate crisis “fake news” and compared student activist Greta Thunberg to a communist. 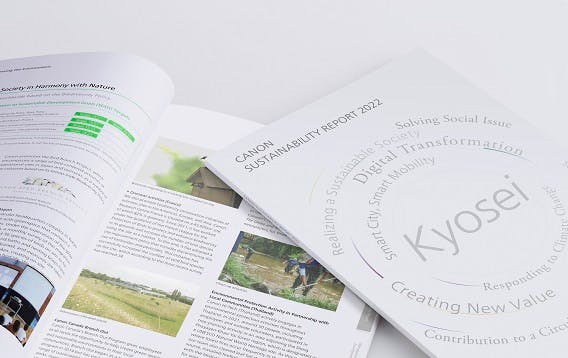 Through its sustainability reports and corporate activities, Canon has repeatedly emphasised its core philosophy of ‘kyosei’, which means living and working together for the common good in Japanese. It said that it will strive to “resolve imbalances in the world”. Image: Canon Global

According to Transition Asia’s research, Canon’s renewable energy procurement target of 4.9 per cent by 2023 is far below industry competitors, most of which have climate targets approved by the Science Based Targets Initiative (SBTi), a body that assesses carbon reduction targets in terms of their compatibility with the Paris Agreement.

Canon has not responded to Eco-Business’s request for comment on its new climate commitments.

This is not the first time that the Hong Kong-based Transition Asia has examined whether individual companies are falling short of climate goals. In September, it analysed the emissions pathway of Japan’s largest steel producer Nippon Steel, and concluded that the company needed to raise its ambitions by investing in greener solutions powered by renewable energy.

In the report, the non-profit pointed to how Japan had experienced its worst heat wave on record this year, highlighting that consumers and shareholders now demand more climate action from homegrown brands. “Most corporate announcements on climate signal increased ambition. Canon’s newly-announced 2030 target does the opposite,” the report said.

Canon could raise its climate ambition by committing to a 2030 absolute emissions reduction target that is at least equivalent to a 45 per cent drop from 2010 levels, excluding the use of carbon offsets, the report suggested.

It also needs to work towards ensuring that Japan delivers on its national energy plan, decarbonise the grid to at least 250g of carbon dioxide (CO2) per kilowatt hour by 2030, as well as invest in renewable energy deals to cover 35 per cent of its electricity demand in Southeast Asia.

Scrutiny of corporate decarbonisation commitments is growing as global greenhouse gas emissions remain at record-high levels. A February study of the world’s biggest corporations found that most are falling short on their climate commitments, with half lacking clear detail on how they plan to decarbonise.