Though consumers in the city-state produce more waste per person than almost anywhere, businesses need to be held responsible for excessive packaging, experts argued at an event held by Eco-Business and FairPrice Group.

Countries around the world have been taking increasingly bold measures to curb plastic pollution in recent years, but one small, meticulously clean tropical island nation has taken a noticeably light touch in tackling an environmental concern that is particularly acute in Southeast Asia.

In its most recent waste masterplan unveiled a year ago, Singapore aimed to reduce the amount of trash sent to landfill by 30 per cent by 2030. The country’s ambition to raise its domestic recycling rate to just 30 per cent, up from 22 per cent now, by 2030, also points to a nation at ease with a waste per person rate that has increased by 20 per cent over the last 15 years.

The country’s corporations, too, have been fairly relaxed in their approach to waste reduction. With a few exceptions, Singapore’s retailers have for years been reluctant to tax customers for using plastic bags, which make up a large chunk of the city-state’s domestic waste stream, for fear of angering cost-conscious consumers.

But could Singapore’s laissez-faire approach to waste management be about to change?

A dialogue hosted by Eco-Business and NTUC Fairprice on Monday (19 October), titled Packaging waste: A circular future, or talking in circles?, pointed to a slew initiatives that could delay the filling of Singapore’s only landfill, which is projected to run out of space within the next 15 years.

An experiment by supermarket player NTUC FairPrice to charge customers for plastic bags at selected stores is nearly at the one-year mark, but no plans have been announced to extend the plastic bag charge beyond the 25-outlet trial phase.

FairPrice Group chief executive Seah Kian Peng said a survey had revealed that some customers are “not supportive” of a bag fee, as they see plastic bags as part of a free service that should be provided by supermarkets. Most Singaporeans dispose of their trash down garbage chutes in high-rise buildings, and use plastic bags to contain wet waste.

But excessive bag use is an issue. Seah said that customers often ask cashiers to double-bag their groceries. According to some calculations, Singapore residents each get through 13 plastic bags a day.

While Seah agreed that bag charges had effectively reduced plastic waste in other countries such as the United Kingdom — which had seen a 90 per cent reduction in plastic bag sales since a charge was introduced in 2015 — he said industry “should not be seduced” by such figures.

“When a charge is introduced, the amount of use falls significantly, but a few months later it goes up again,” he said, adding that his company was studying the results of its charge trial before deciding on the next course of action.

Charging for plastic bags in Singapore comes with the risk that consumers will shift to another brand that gives out free bags. Seah called on other retailers to join FairPrice in its commitment to sustainability.  “We really need more players to be on this journey,” he said.

FairPrice’s bag charge trial followed a 10-year initiative that offered customers a 10 cents rebate if they brought their own bag, which ended in 2018 after bag use reduction “plateaued”.

Grace Fu, Minister for Sustainability and the Environment, said that taxes on plastic need to consider low-income families. “They will have to fork out for [plastic bags], or decide not to bag their waste, which will lead to other problems,” she said, pointing to the public health implications of wet waste thrown down the garbage chute unbagged.

Fu cited the coming Mandatory Packaging Reporting (MPR) framework, which obliges large companies to report their packaging use, and an Extended Producer Responsibility (EPR) framework, which will make firms responsible for the collection and treatment of used packaging, as measures that could really move the needle on waste in Singapore.

Fu noted that the frameworks would help Singapore raise its recycling rate, which fell to just 4 per cent for plastic last year, and encourage companies to design products that require less packaging and can more easily be recycled. 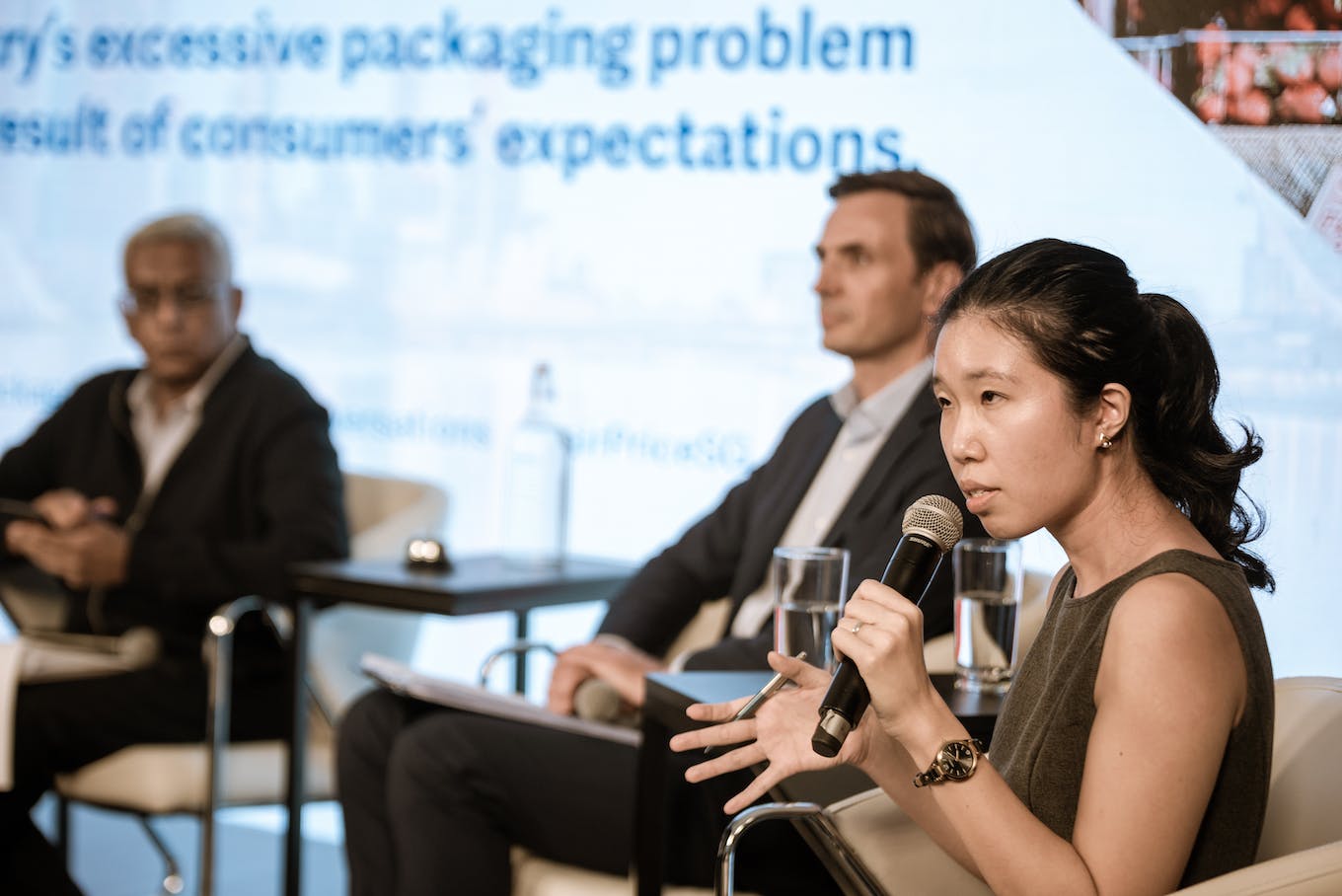 Who’s responsible for the waste problem: consumers or companies?

A debate held at the event indicated that more is expected of industry to tackle plastic waste, and producer responsibility regulations were much needed to curb a plastic waste stream that has increased seven-fold since the 1970s.

In response to the debate motion — industry’s excessive packaging problem is the result of consumers’ expections — only 38 per cent agreed that Singapore consumers were to blame for the problem.

Hailin Pek, executive director of Zero Waste SG, which has led the Bring-Your-Own container movement in Singapore, argued that companies were creating fancy packaging to drive consumerism and justify a high price point. This excessive packaging is often made from mixed composites that are difficult to separate and recycle, she noted.

Retailers are excessively packaging supermarket items because of concerns that consumers will damage them. But this packaging is unnecessary, Pek said, adding that packaging could be significantly reduced and replaced with QR codes that provide customers with the product information they need.

Plastic is indestructible — we need to put a price on that, with a global tax.

Jacob Duer, president and CEO of the Alliance to End Plastic Waste, a collective of plastic producers tackling waste in developing countries, said that while industry players such as Amazon and FairPrice were making some progress in addressing the issue, industry was “not acting fast enough.”

He pointed to research in the United States that found that more than half of consumers think that consumer goods brands are responsible for packaging waste.

Arguing for the motion was Mohit Grover, head of strategic and reputation risk practices at Deloitte Southeast Asia. He said that consumers had not signalled they wanted less waste “loudly enough”, and referenced a study by Deloitte and the Singapore Environment Council that found that seven in 10 Singapore residents don’t know how to recycle, most citing convenience as the reason why they don’t recycle.

Unboxing videos, where social media personalities “celebrate waste” by opening newly purchased items on YouTube, showed that millennials don’t care about the environment as much as they’re credited for, Grover said.

Also arguing for the motion was Zhaotan Xiao, Asia Pacific president of RWDC Industries, a firm that makes biodegradable plastic. He pointed to research that found that while 70 per cent of consumers say they want more sustainable products, only one in five actually buy them.

He said that businesses wanted to change, but are “stuck” because plastic is not appropriately priced. “[Plastic waste] is a classic case of market failure. The negatively externalities of plastic have not been priced properly. Plastic is indestructible — and we need to put a price on that, with a global tax.”

Excessive packaging should be banned, Xiao argued. “Policymakers should just say that packaging cannot exceed 50 per cent of a product’s weight,” he suggested.

The event took place a few days before a white paper by World Wide Fund for Nature (WWF) and Ellen MacArthur Foundation called for a United Nations treaty on plastic pollution. The paper argues that, despite corporate pledges to reduce plastic waste, leakage into the ocean continues to rise, and a global regulatory framework is needed to address the problem.